A collective blog of random titbits of information and ideas I have all about the 'terrible lizards' and a few other ancient reptiles!

Entries in this blog 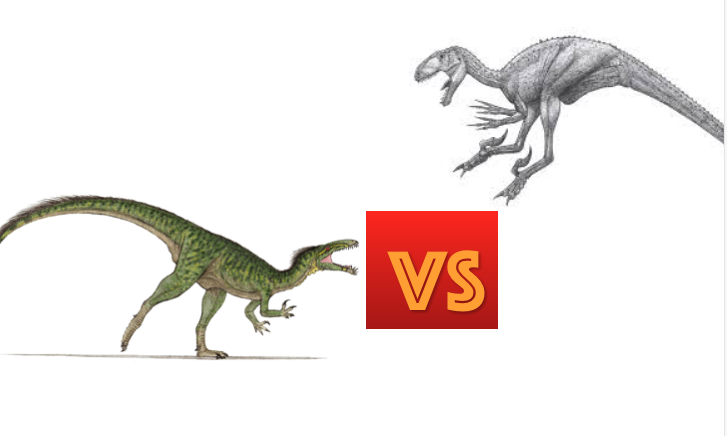 Welcome to the first entry of my dino blog! I figured for the first entry I should do something exciting and personal to me, so I'm doing a face-off between my two favourite dinosaurs: masiakasaurus and noasaurus! These two dinos are roughly the same size and are the two smallest abelisaurids found so far. Before we get into the match-up, lets look at some stats and figures for the reptiles themselves.

First off we have masiakasaurus, a piscivorous dinosaur with long, outward jutting teeth designed to capture and make sure any fish caught can't escape. Its arms had to be strong in order for it to hold on to its wriggling and squirming prey, and it's fingers end with hooked claws that would latch onto any fish snatched from the riverbank. It was 5.6 feet long (2 metres) and definitely is a strong and deadly competitor.

Now we have noasaurus, an abelisaurid that closely resembles the maniraptorans, for the killing claw on nova's hands was originally thought to be based on it's foot, like a raptor. Noasaurus was an active hunter and could reach blisteringly fast speeds, presumably using similar hunting techniques to deinonychus and velociraptor- going for the soft, fleshy part throat of the animal. This abelisaur was 7.9 feet long (2.6 metres) and will definitely prove more than a match for masiakasaurus.

This fight would probably only happen if noasaurus' hunting grounds started to clash with the section of the river masiakasaurus hunts by. As rivers generate a large amount of noise, noasaurus would definitely gain the advantage as it snuck up on masiaka, who would be facing the river, searching for prey. Noasaurus' first move would presumably to lunge from behind onto masiakasaurus' neck, attempting to get a killing strike in with the claw on it's hand. This move would likely push them both into the river (dinosaurs are pretty dumb, so noasaurus wouldn't have planned for that to happen!) where masiakasaurus would gain the advantage. It's outward jutting teeth would have to be strong to hold staring and thrashing prey, but they just weren't suited for attacking other dinosaurs. The hooked talons on it's hands, however... As masiakasaurus lacks hunting and attacking instinct, it would probably throw some wild slashes at the lightly built noasaurus, who would be struggling to keep it's snout above the water. Masiakasaurus would probably have experience from falling in to it's hunting grounds, and so would be prepared to get out. And as masiakasaurus would escape the confines of the water, the blood and gashes from the battle would attract some other aspiring aquatic predators. The poor, drowning noasaurus would presumably be finished by a crocodile of some sort or, once it drowned, scavenged by some smaller, predatory fish. So, in the end... MASIAKASAURUS WINS!