This pictured report about the ammonite bearing Triassic Hallstatt limestone will be the first one of a continuous series of reports.

Since the beginning of the geological research in the Northern Calcareous Alps of Austria in the 19th century, about 500 species of Triassic ammonites have been described from the Hallstatt limestone by Mojsisovics, Hauer, Diener and other authors.

The most important person in the development of the first Alpine Triassic ammonoid biostratigraphy was the Austrian palaeontologist Edmund von Mojsisovics. When viewing his classical monographs one is overwhelmed by the stunning Lithographics created by the artists of the late 19th century. Every recent serious triassic ammonoid researcher includes these old works in the standard literature of triassic ammonoids. Unfortunely his ammonoid bio-chronostratigraphic scale had some mistakes (changed zones) especially the incorrect stratigraphic position of some ammonoid zones in the Norian stage. It was the merit of E.T. Tozer to discover this weakness and to correct it. Hallstatt limestone facies is a type of triassic Ammonitico Rosso facies which also occurs in several other locations all over the world.

The Hallstatt Limestone Facies of Austria consists typically of red to grey –coloured, in some parts abundantly fossiliferous limestones locally interbedded with marls. Also strongly condensed successions are common. Fossils mostly do not occur in continuous layers but in so called lenses and fissure fillings.

The most common fossils are Ammonoids and Nautiloids, but Crinoids ossicles, Bivalves, Conodonts and Gastropods also occur.

In this report I will introduce you to the Triassic ammonoid zone of the Alaunium 2 /Norium/ Upper Triassic of the Hallstatt formation.

The stratigraphic level lower Alaunium 1 will be shown in a future report. 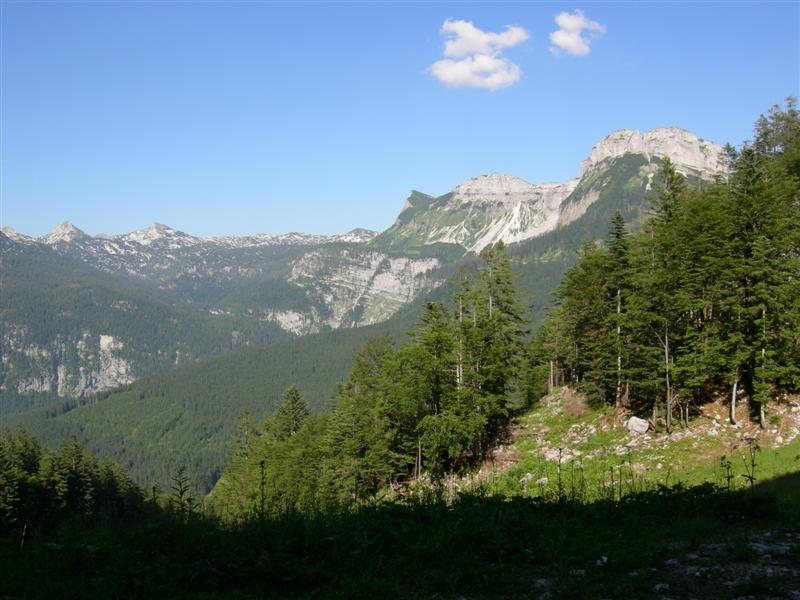 Fig.1 A very beautiful view of a tectonic border. The Valley in front marks the tectonic border between the mainly Triassic Hallstatt unit und the Tirolikum unit of the Totengebirgs nappe. The highest mountain shown on the picture is the "Loser". The well bedded limestone in the summit area are of Jurassic age. This is in turn resting on Triassic "Dachstein" limestone that ends roughly in the middle of the picture.

The name of this stage was chosen by Mojsisovics after the Celtic folk of the Alauns.

In historical times this tribe lived in the forelands of the calcareous Alps in the area of the later Roman province Noricum.

Zone ammonite of the Alaunium 2, outside of the Tethys realm, is Mesohimavatites columbianus Mc LEARN, well known from the boreal Triassic of British Columbia in Canada.

In the Tethys realm the whole Alaunium is split into three subdivisions.

The subzones I-IV shown in the timescale below were established after bed by bed collections in the well-bedded erratic limestone blocks of Timor by the Austrian geologist Franz Tatzreiter.

In the Hallstatt limestone of the northern calcareous Alps, Himavatites sp. occurs very scarcely. It is impossible to use this genus for Stratigraphic aims on new detected locations. A normal collector could use the following rough scheme to insert ammonoids in the right stratigraphic subzone. But notice that strong condensation, fissure filling etc. can blur this schema. For a newbie collector it is much more difficult to find some fossils there at all. To place them into the right ammonoid zone is the easier part of the exercise.

Rough scheme, to place ammonoids into the right subzones of the Alaunium 2 in the Hallstatt limestone.

Subzone III: Halorites starts, Distichites can be found too, but ends in this subzone,

In the upper sphere of subzone 3 and in the lower sphere of subzone 4 Halorites sp. is a very common faunal element. In locations which expose this time interval Halorites is more common than other leiostraca (=ammonoids without sculpture) ammonoids like Arcestes sp. The often used term Halorites horizon (KRYSTYN, L., 1973) points that out exactly.

The right venter view could also be termed as a Halorites macer.

The difference between H. macer and H. ramsaueri is not clear due to the great variability of these two species and is totally questionable in my opinion.

To the genus „Catenohalorites" count all species of Halorites, which show the chain like („catenat") arranged nodes of the inner whorls on the phragmocon too. (The inner whorls are more or less catenat by all Halorites sp.)

Beside the well known historical location of the Sommeraukogel, which exposed all four subzones, there are several other historical locations. For example: Hallein, Hoher Student, Leisling, Pötschenhöhe, Rossmoos and Röthelstein.

Years ago I was lucky to find a talus block in an area of such an historical location. Later in this report I will show the ammonoids of this block.

Two new faunas shown here in this report came from locations hitherto not yet described.

One highlight of the Halorites location was the discovering of a Bambanagites MOJS. 1896. This is the first evidence of this genus in the Hallstatt realm.

In Dieners work, „Fauna of the Tropites-Limestone of Byans", another species, B. kraffti DIENER, is described. The Venter of B. kraffti is very sharp with only weak waves on the flank. Further research on Bambanagites (member of the family Pinacoceratidae) resulted in no other location/occurrence than the above mentioned location in India. Maybe Bambanagites occurs also in the Triassic of Timor. I haven't found any citation but judging by the frequent occurrence of fauna of alaunian ammonites there, it could be possible to find some. 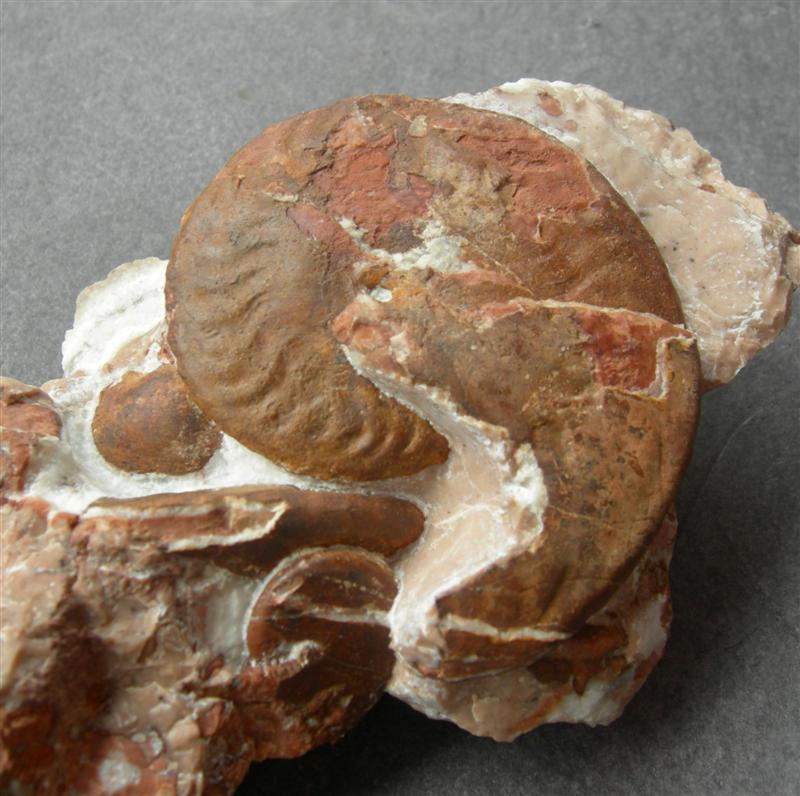 Fig 5 Bambanagites cf. dieneri MOJS. a first evidence in the Hallstatt limestone of the eastern Alps, possibly a worldwide first evidence outside the type locality in India. 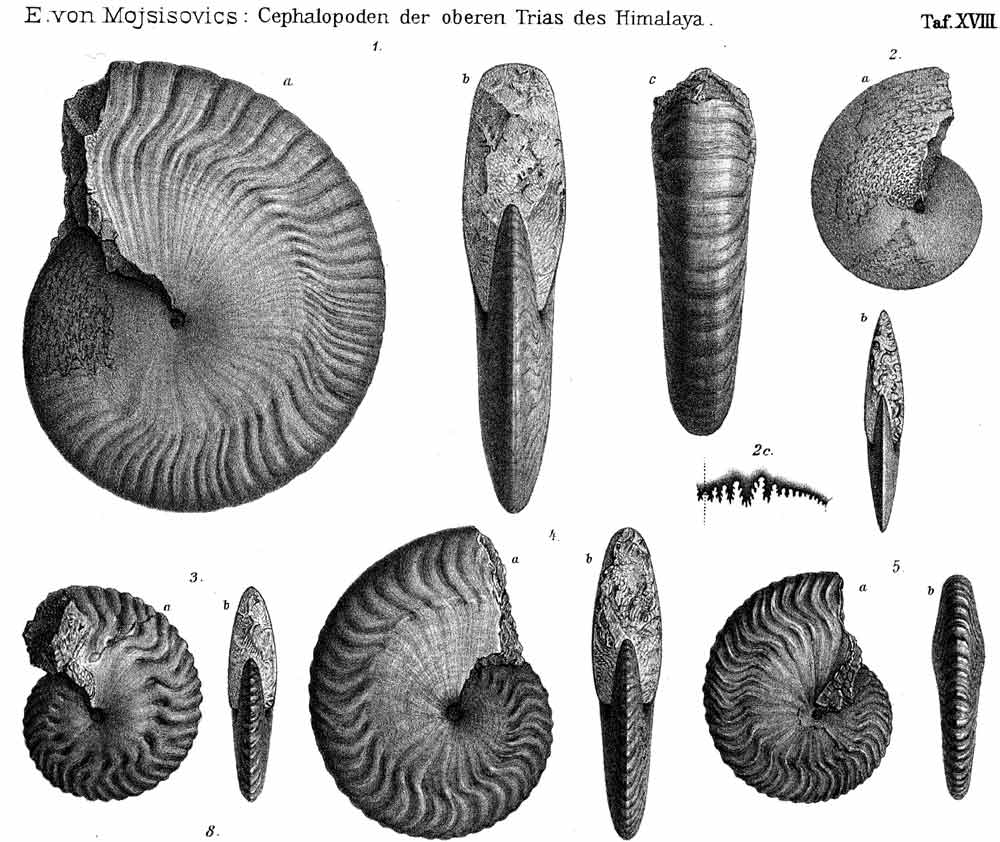 The impression of the Bambanagites sp. is on the backside of this slab with Halorites cf. macer MOJS.(8cm) on the following picture 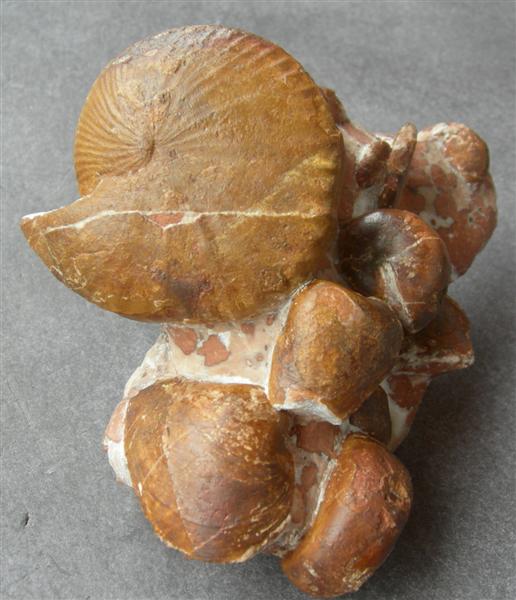 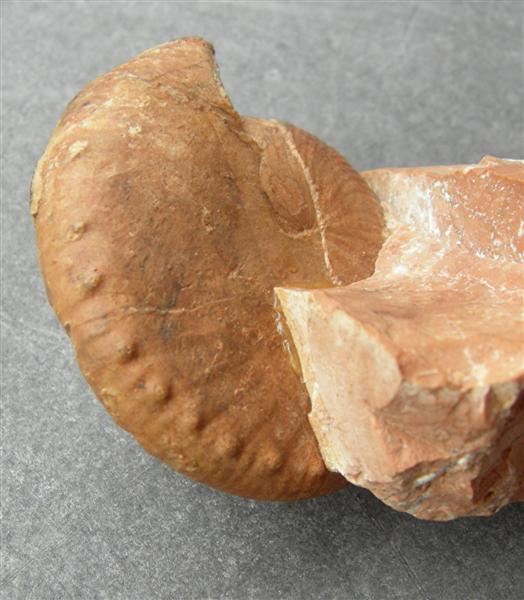 Fig.8 Halorites sp. with very prominent nodes on the venter 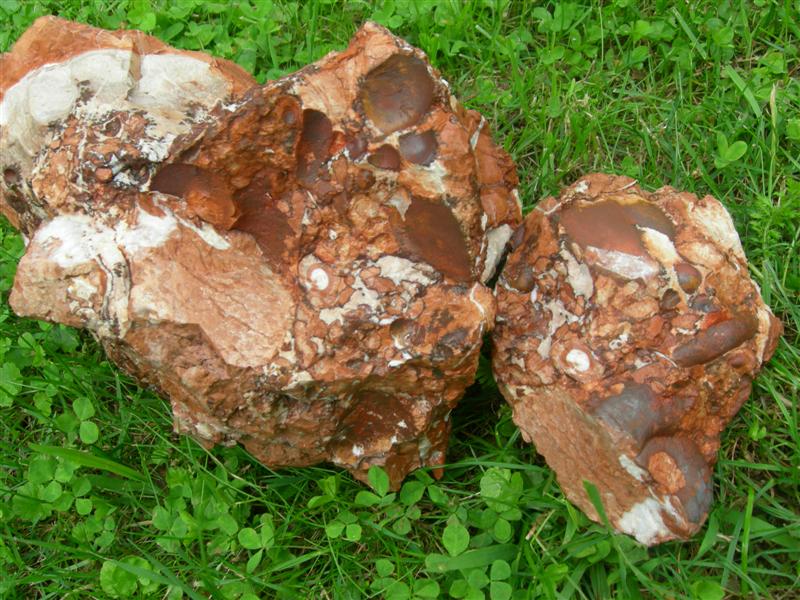 It is further worth a mention about the occurrence of the Ammonite genus. cf. Psamateiceras in this location. Natural picture size is 45cm.

Other important ammonoid species of the macer zone

A beautiful, conspicuous faunal element of the macer zone is Steinmannites sp.

With different species this genus shows its maximum in this zone and was found relatively frequently in this location within the Halorites location. 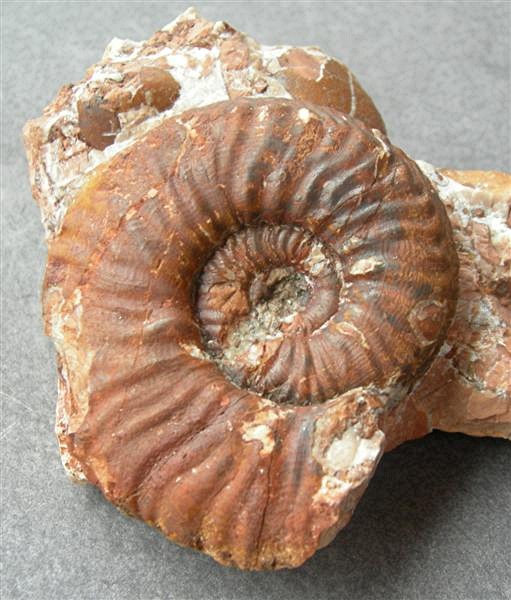 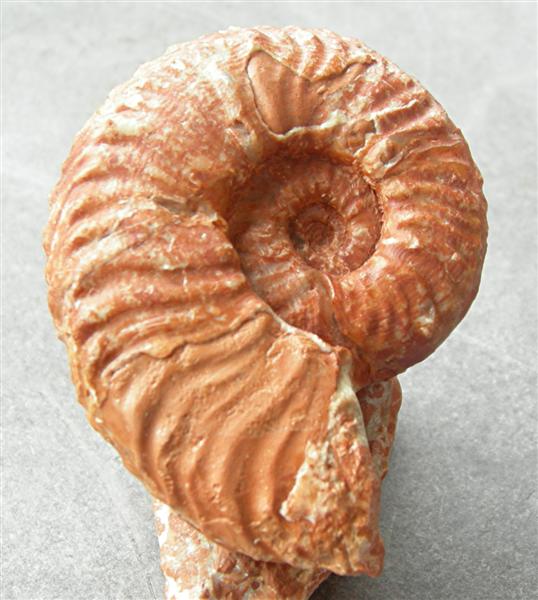 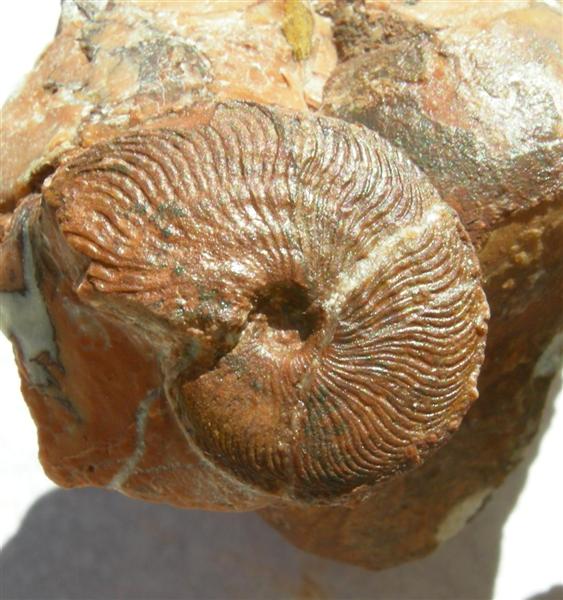 Another frequent faunal element of the Alaunium 2 is Paracladiscites multilobatus BRONN. This species differs from Cladiscites and Hypocladiscites by the absence of the spiral striations. Only fine radial growth lines are visible on the shell. 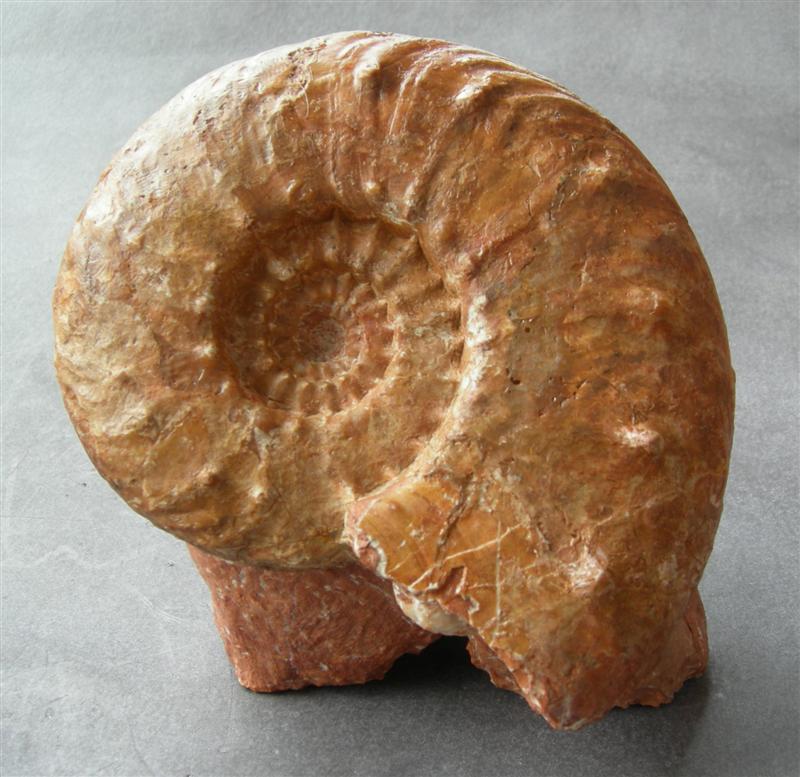 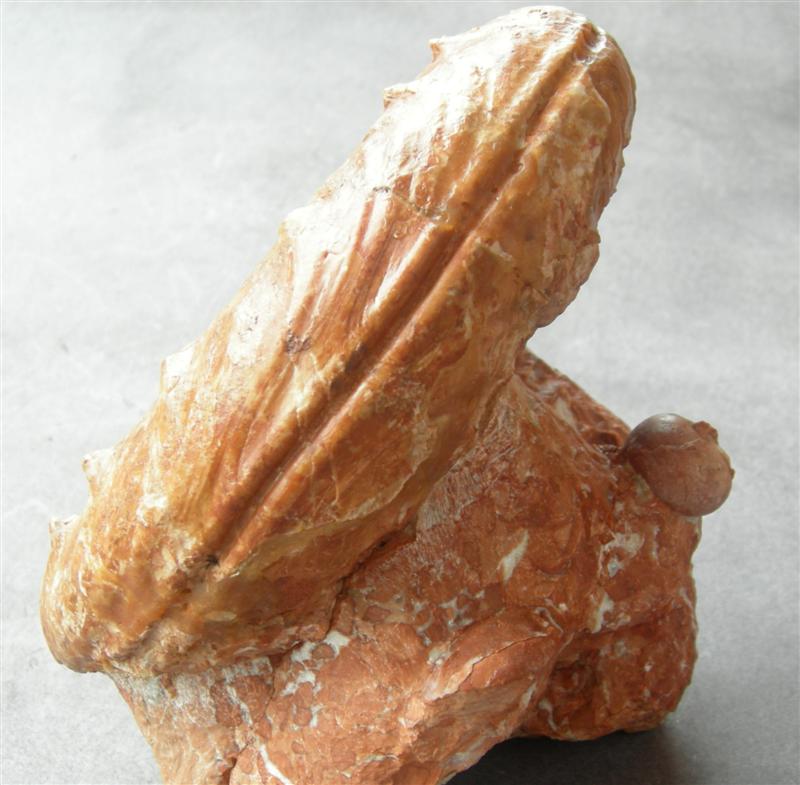 Venter view of Distichites megacanthus MOJS. Diameter is 19 cm; this is rather the growth limit of this species.

Distichites sp. is easy to determine by the two bulges following the venter furrow 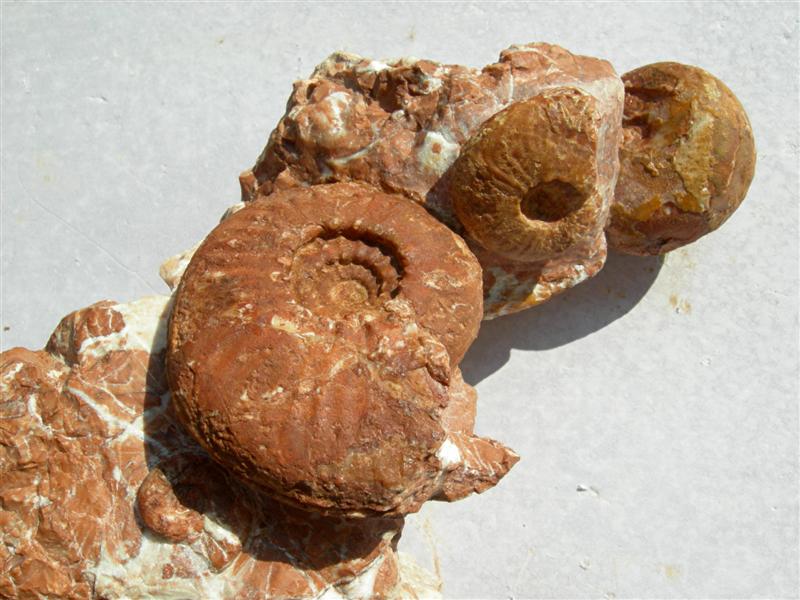 Distichites were found in different species at this location but very scarcely. From 30-40 other ammonite's roughly one piece of Distichites sp. was found. Most common ammonites are Placites and Arcestes. 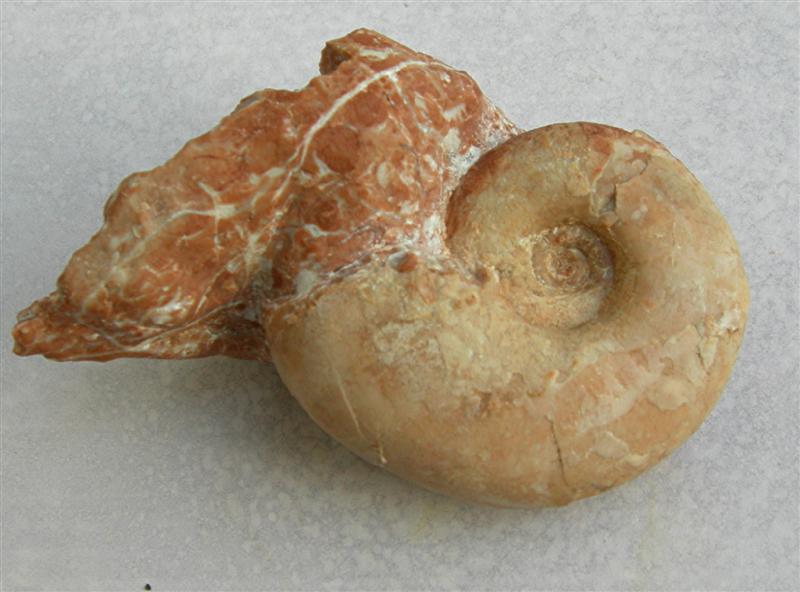 The second new location comes from another area and is also a reworked horizon. This horizon is associated to a small tectonic fault which strikes through the surrounding normal-bedded limestone at a low angle.

This zone of weakness may have already been active at the time of the limestone sedimentation and may have worked as a trap for fossils. The stratigraphic lower part (compared to the surrounding limestone beds) of this horizon bears big Halorites cf. ramsaueri embedded in micritic red limestone which was tectonically stressed. In the stratigraphic younger part of this horizon, compared to the normal-bedded surrounding limestone beds, sparitic fissure filling is given in which abundant small ammonoids and gastropods are embedded. According to the occurrence of scarce Sagenites sp. small catenate Halorites and small Hydrozoans, this sparitic part of the fissure filling dates into the subzone IV (after Tatzreiter). 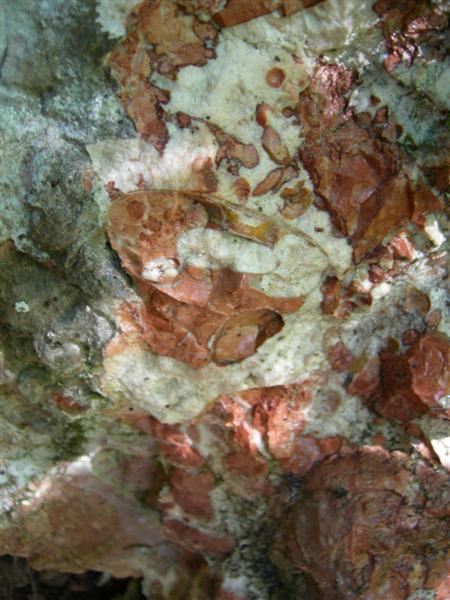 Cross-section of a Rhacophyllites neojurensis QUENST. In situ picture from the white sparitic filled stratigraphic upper part of the fissure.

Natural size of the picture ca.30x25cm

The left side of the picture shows how unspectacular the weathered rock looks, although the mossy vegetation has been removed before by hand. 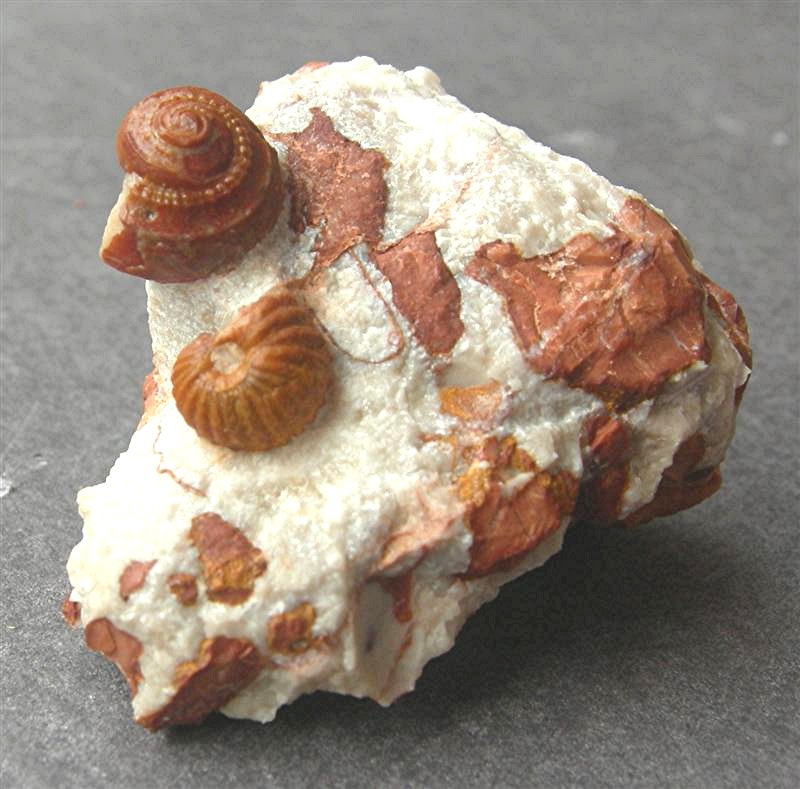 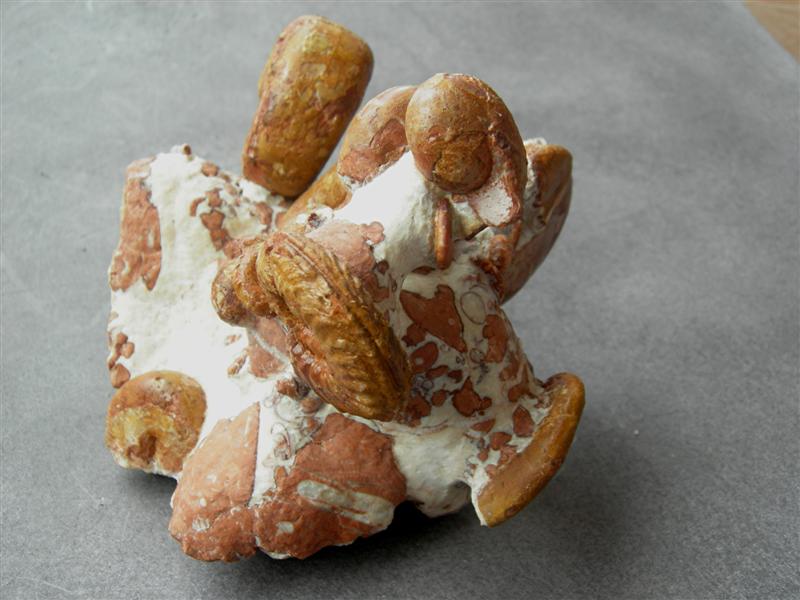 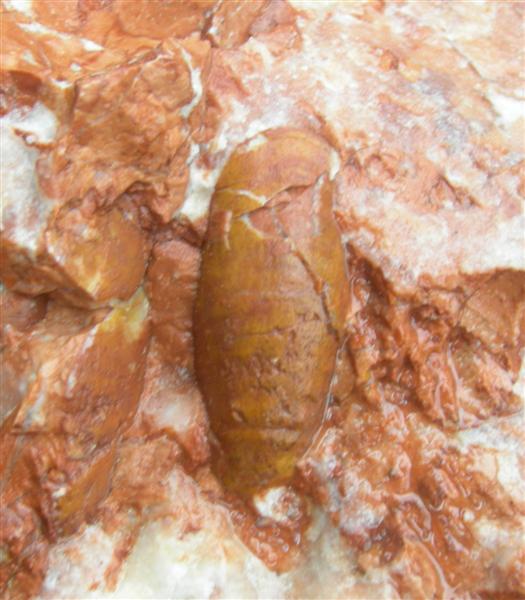 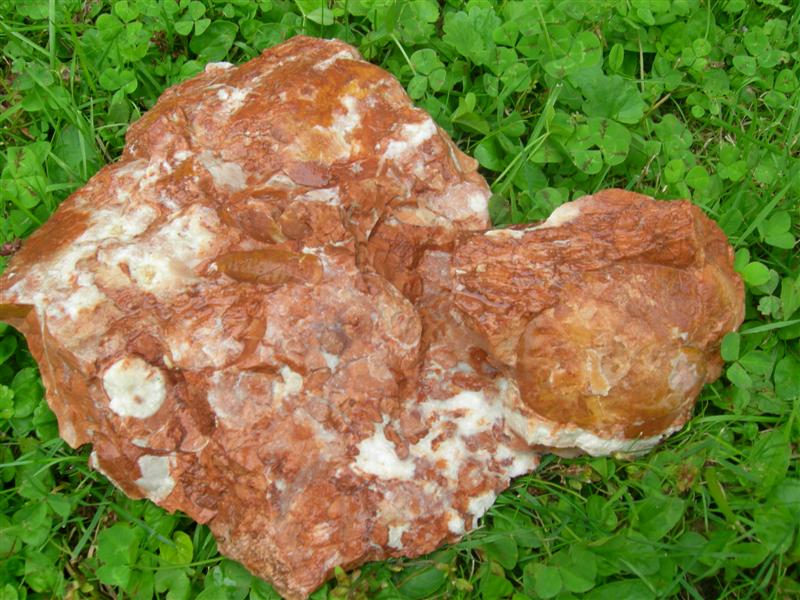 Block from the tectonically stressed area of this fissure. Well visible are the calcitically healed slip movements in this rock which show us a "frozen" moment during the lithification of this limestone.

Now to the aforementioned talus block of an historical location. After the first blow of the hammer a Halorites was visible. By finding an Amarassites cf. semiplicatus HAUER I was able to date the fauna of this block into the Subzone III afterTatzreiter. 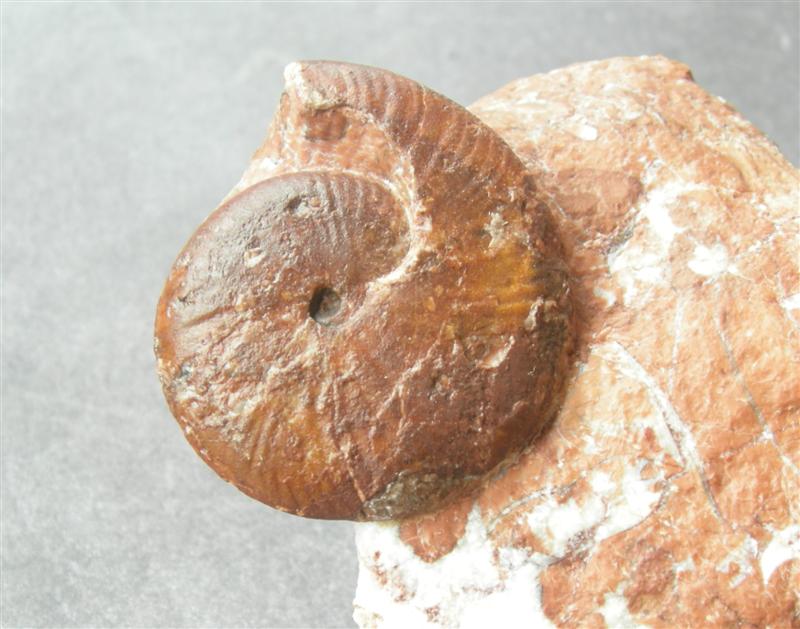 Amarassites cf. semiplicatus HAUER (5cm) from the above mentioned talus block of an historical location. 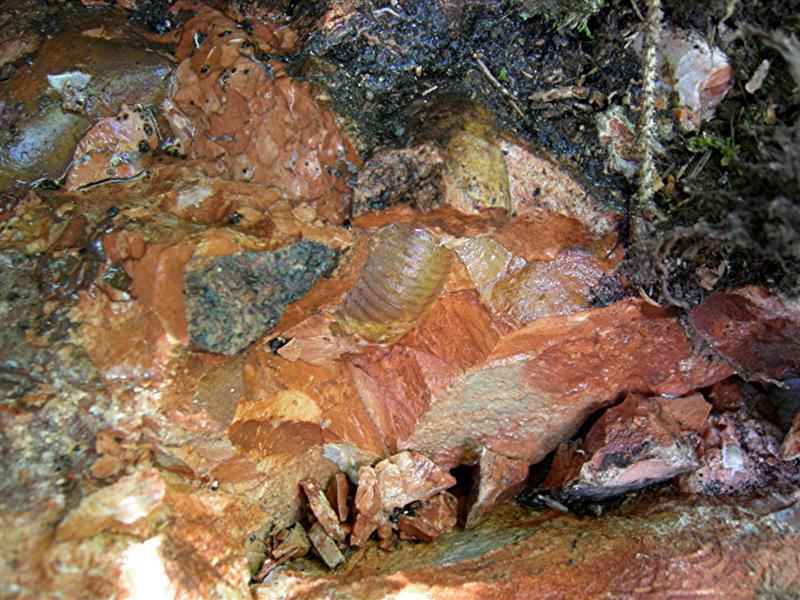 At the end of my report some pictures of another Alaunian 3 Fauna. From this location I have less material. The faunal composition differs a little bit from the above mentioned locations. New to this location is cf. Parajuvavites mercedis MOJS. and cf. ?Acanthothetidites sp. 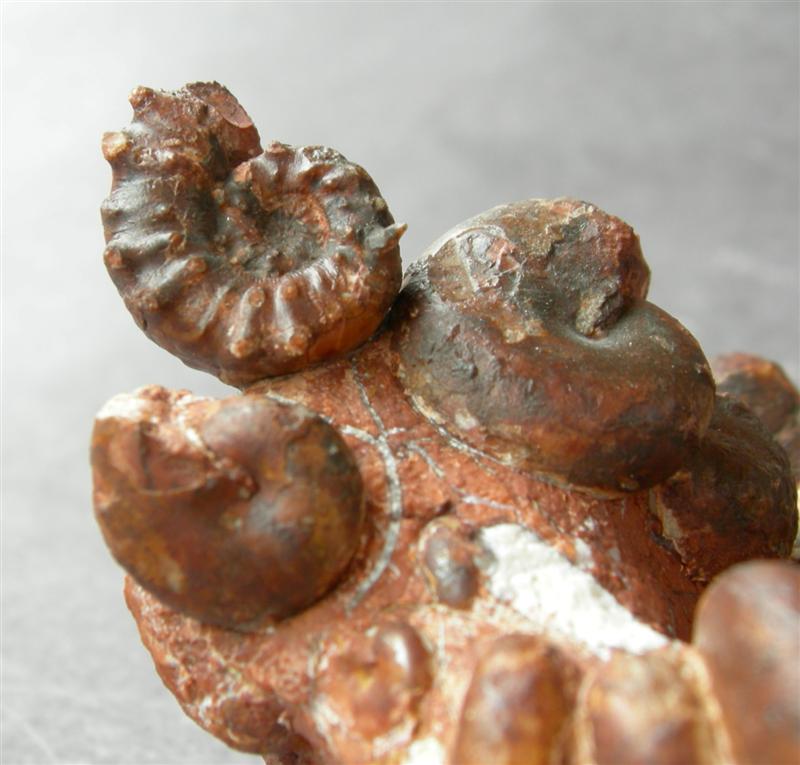 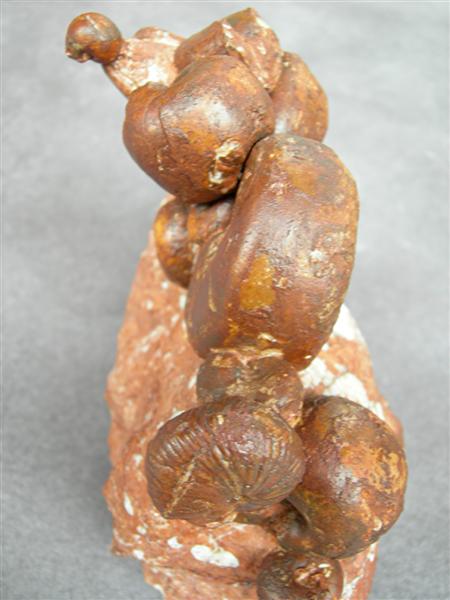 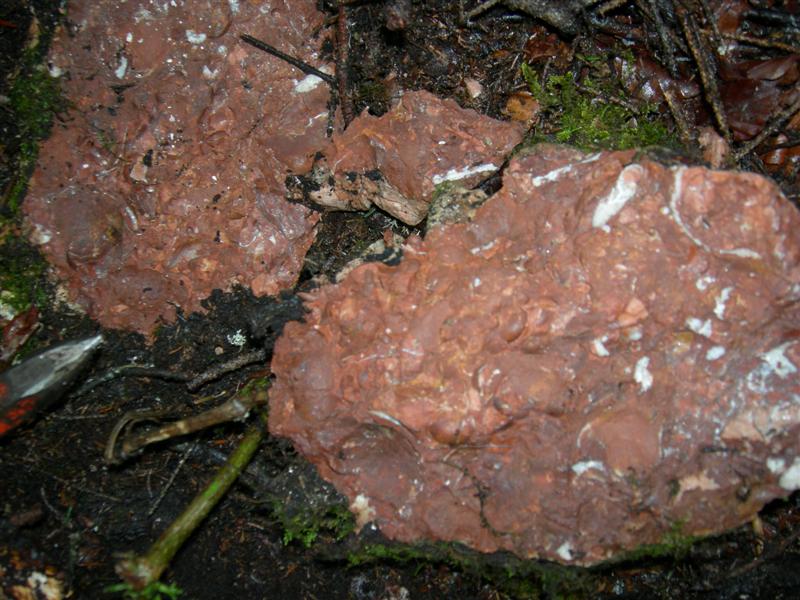 I hope you have enjoyed this report about my favourite collecting area. Unfortunly I cannot load up graphics. Maybe it is possible and I only do not know how to do this. Maybe somebody can help me in this case.

A special thank is given to Fossil forum member "Ludwigia" for correcting my uncivil kind of English.