In a previous post (http://www.thefossil...ushmere-member/) I described the Upper Pliocene fossils from the Rushmere Member of the Yorktown Formation in North Carolina and late last year (that is how far I am behind in my cleaning and curating) I returned to two of those Rushmere sites on the Roanoke River (my localities 1011 and 1012) as well as a new site (locality 1019) on the Tar River. On that particular day locality 1012, which is primarily explored for a lag deposit at the base of Rushmere which is rich in vertebrate remains, did not yield many of its treasures. I did however collect many more large bivalves which are present here including nice examples of large and heavy Zone 2 guide fossil, Chesapecten madisonius which could have come from a near shore higher energy environment where the size and weight of the shells could have helped in immobilizing the animal.

Last time, I reported that locality 1011 was unusually rich in gastropods. My return trip to this site did not disappoint and with a longer visit than my last, I was able to do more digging to produce additional examples of volutes, naticids, a few new gastropod species, a fine example of the bivalve, Margarita abrupta with mother of pearl nacre and the largest Ecphora quadricostata that I have ever collected—perfect except for the unfortunate absence of the top few whorls (fig. 1). 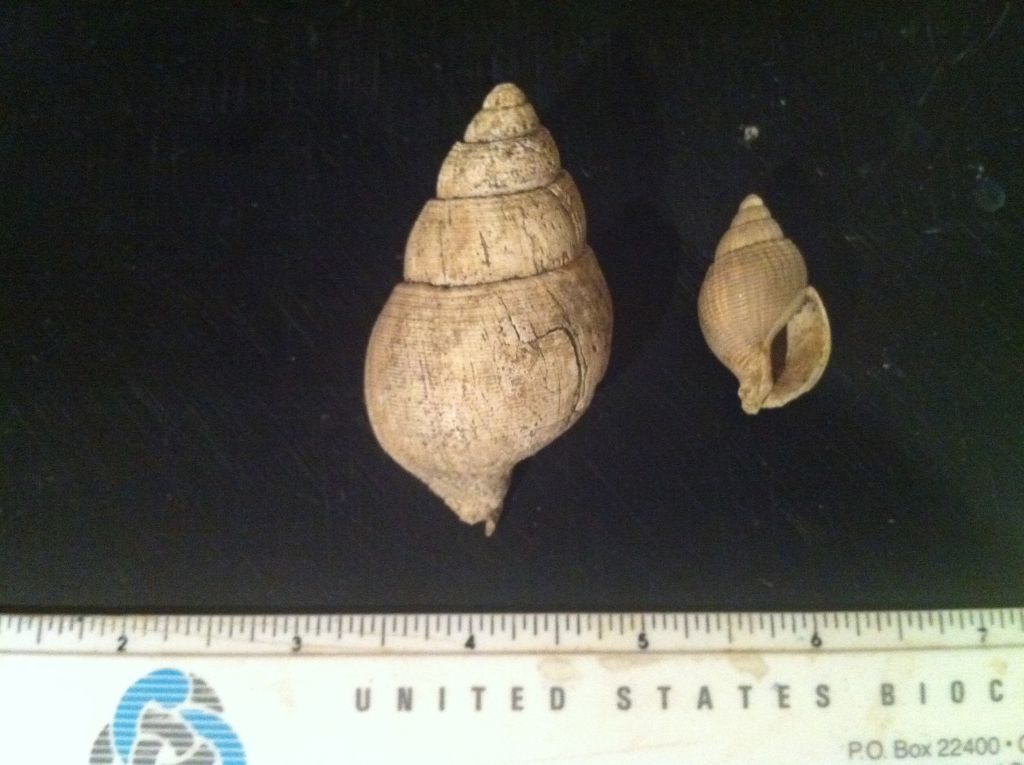 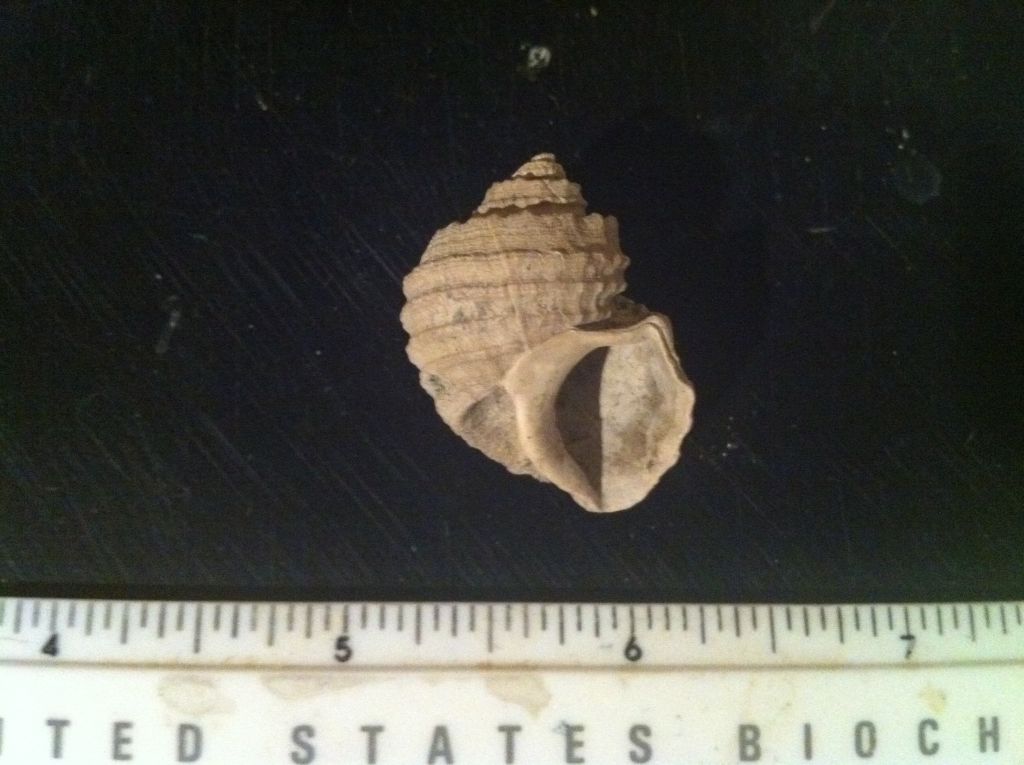 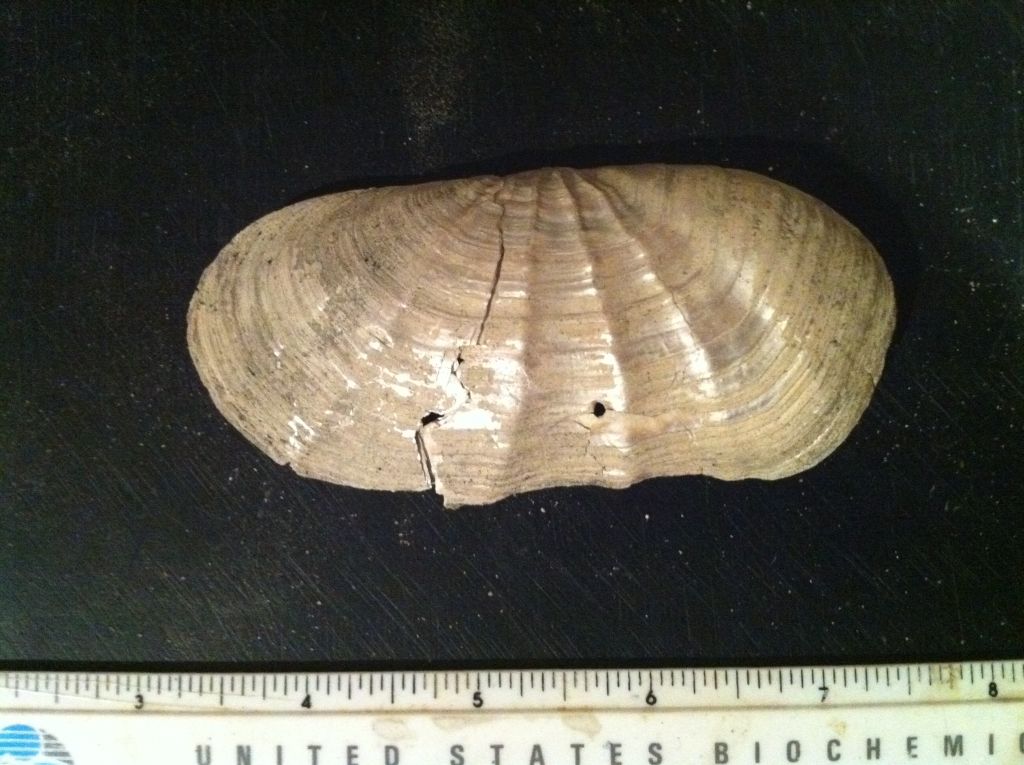 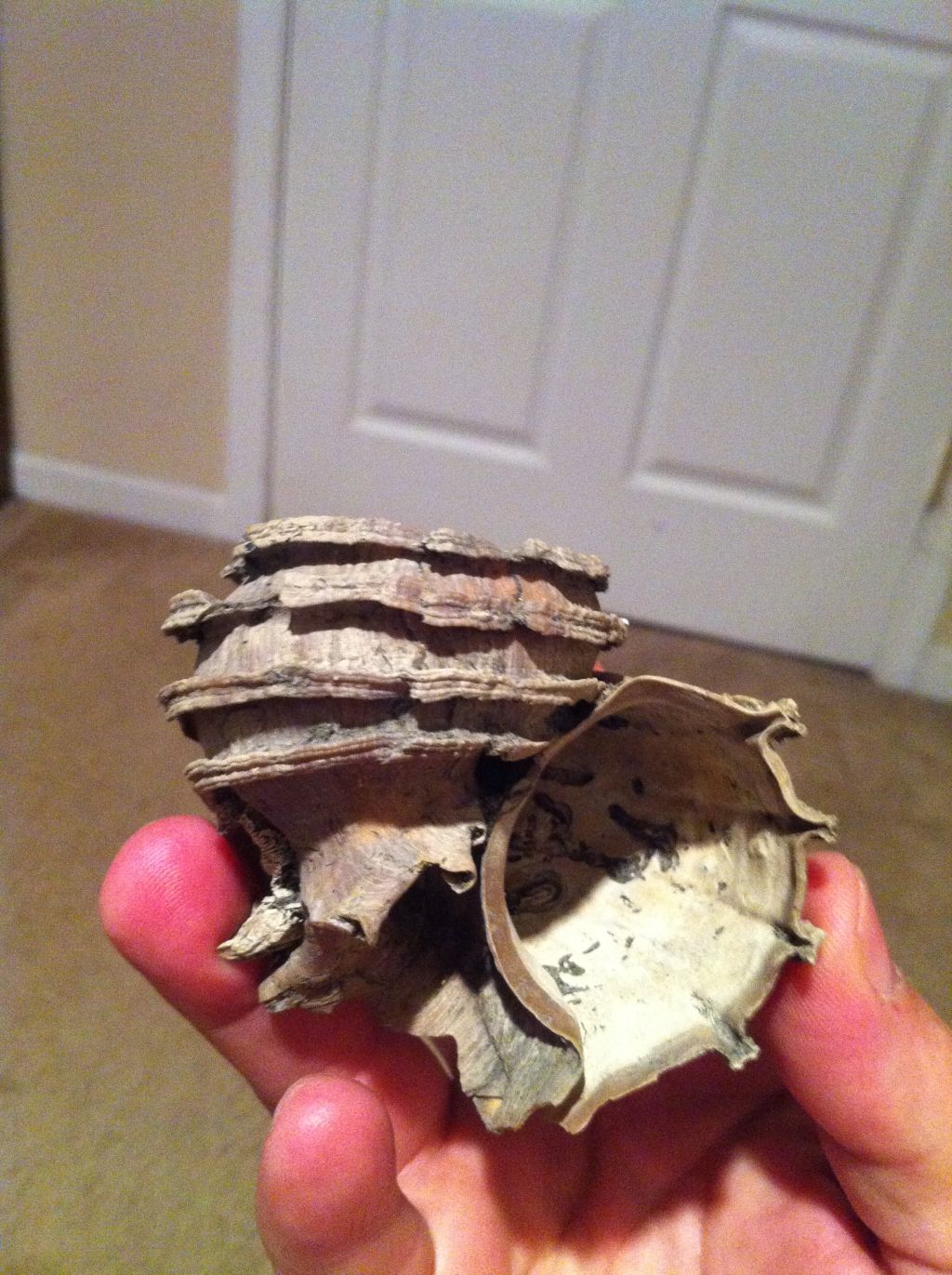 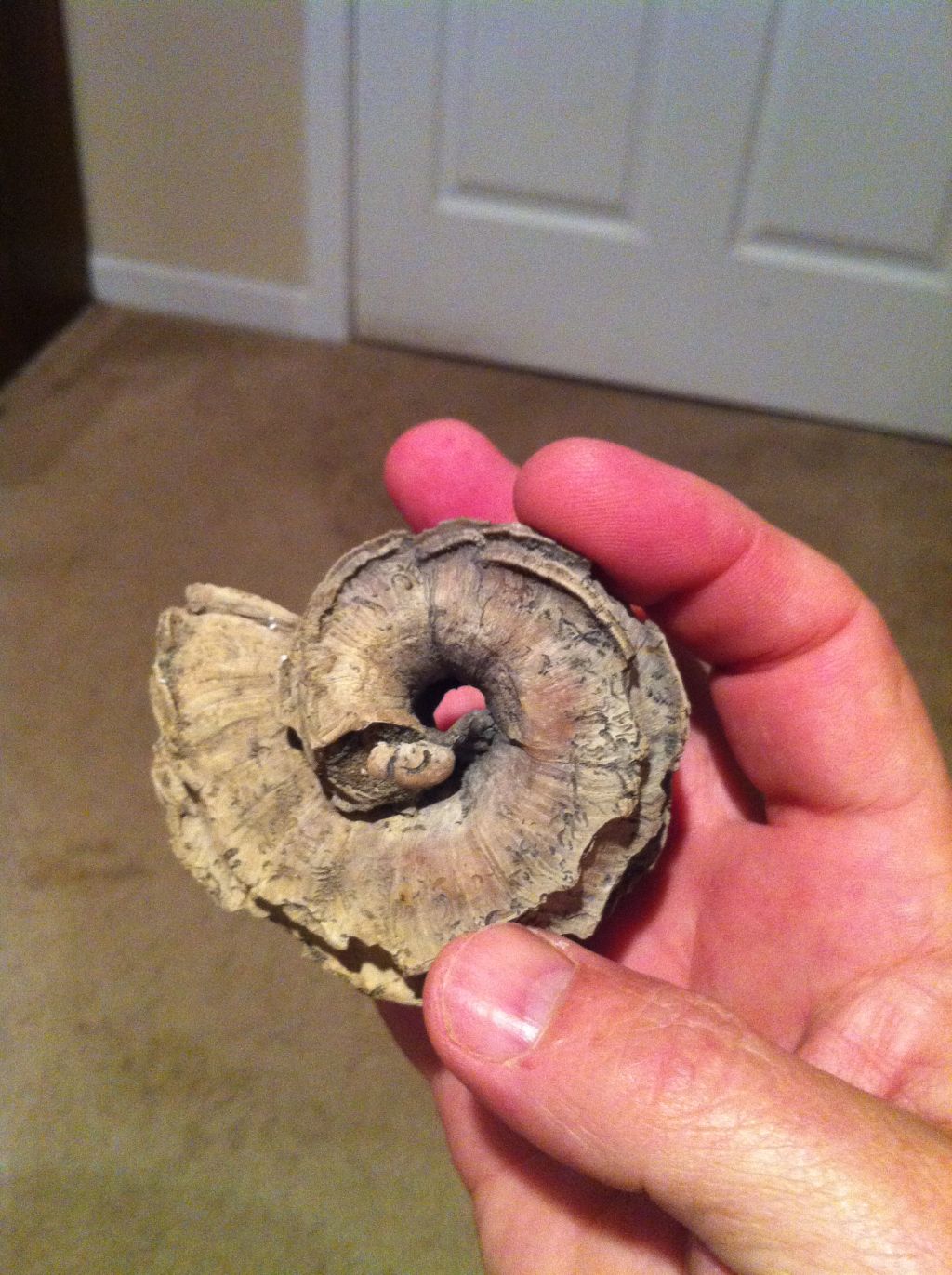 This trip was the first time that I have collected on the Tar River. Site 1019 exposed a bluff with a gray and very sandy exposure of the Rushmere rich in bivalves. Chesapecten madisonius were as large as those from locality 1012 however thinner maybe because they were in an open marine environment where the heavy shell was not needed. Also of note were large specimens of Chlamys decemnarius, a Rushmere index fossil. I have collected smaller examples which are typical at other Rushmere sites however these were significantly larger. The one that I collected was 3 inches long. Dr. Lauck “Buck” Ward, professor emeritus at the Virginia Museum of Natural History (who along with Blake Blackwelder, named the Rushmere) led the trip and found a specimen at least 4 inches long remarking that his was one of the largest he has seen. C. decemnarius demonstrates a large degree of variation within the Rushmere (fig. 2) which Thomas Gibson did an excellent job of showing in the second Smithsonian publication of the Lee Creek Mine. Lyle Campbell, in his 1993 Yorktown publication, listed the large ribless form as C. decemnarius virginianus from an earlier description by T.A. Conrad, but noted it as a named variant rather than a subspecies. 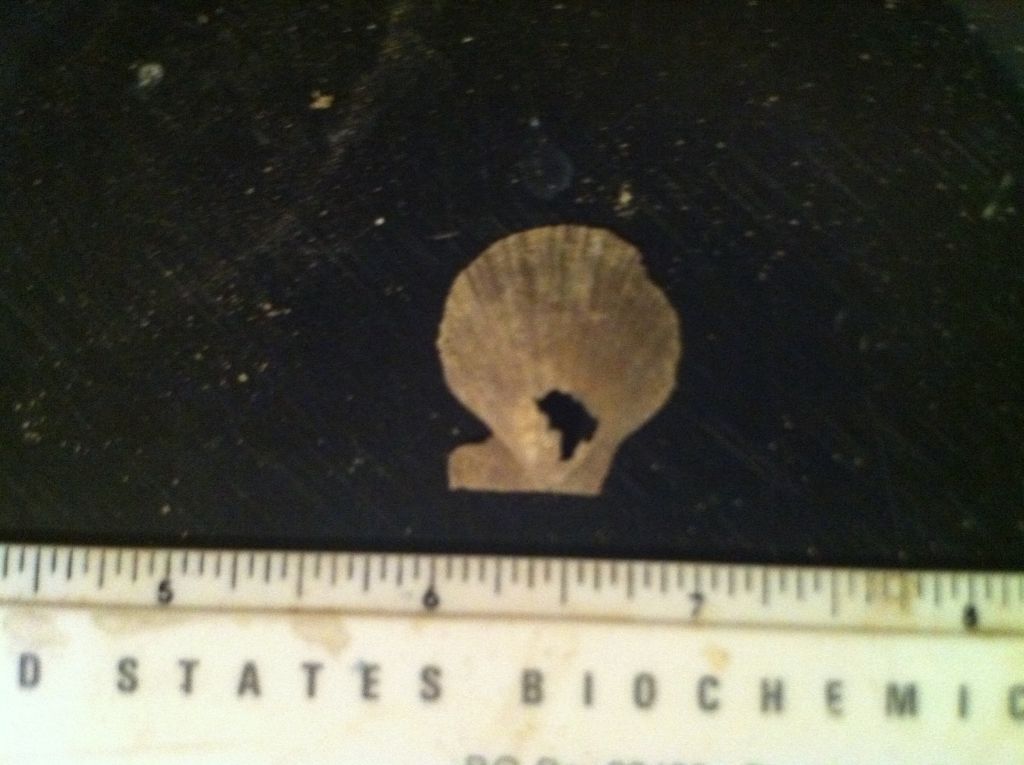 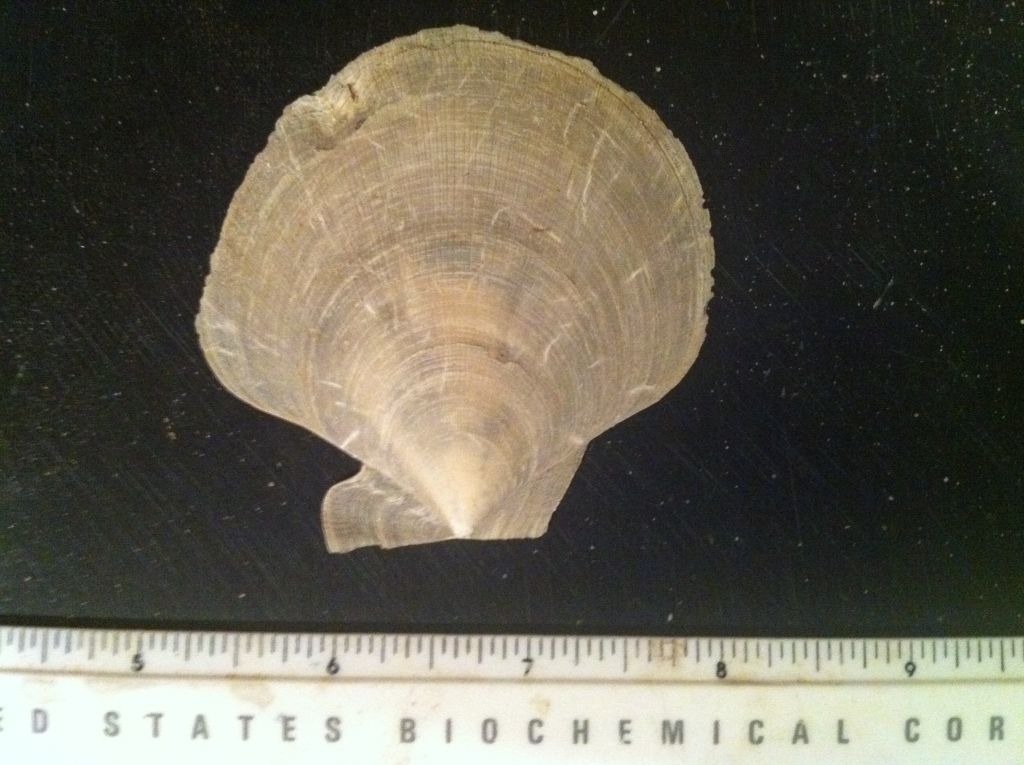 As I reported in my first post about the Rushmere, C. madisonius at site 1011 is unique in having approximately 9-10 ribs whereas those from most other sites have approximately 16 ribs. These specimens with 9 ribs are very similar to the Chesapecten that are found in Bed 11 of the Pinecrest Sand of the Tamiami Formation in Florida (http://www.thefossil...iami-formation/). Campbell called the Rushmere examples Chesapecten madisonus carolinensis based upon Conrad’s description. Buck believes these to be hybrids between 4-8 rib Chesapecten septenarius and 14-16 rib C. madisonius (personal communication). Campbell however reports these at the base of the Rushmere as an intermediate form between Chesapecten jeffersonius from the Zanclean Zone 1 Yorktown and C. madisonius in the Piacenzian Zone 2 Yorktown. This would make sense if not for my observations at the site on the Tar. Here a brown sandy layer is packed with the 9 rib form above the gray sand layer with the 16 rib variant. This would discount Campbell’s interpretation since the material at the top is younger unless a redeposition event occurred such as what could be happening on the James River where Miocene and Pliocene fossil shells from the river bluffs are washed out and possibly redeposited over the recent brackish water fauna. I have noted that at any one site either the 9-10 ribbed form of C. madisonius or the 16 ribbed form dominates. Although I discount his precursor hypothesis, I have decided to use Campbell’s description of that variant as C. madisonius carolinensis (fig.3). 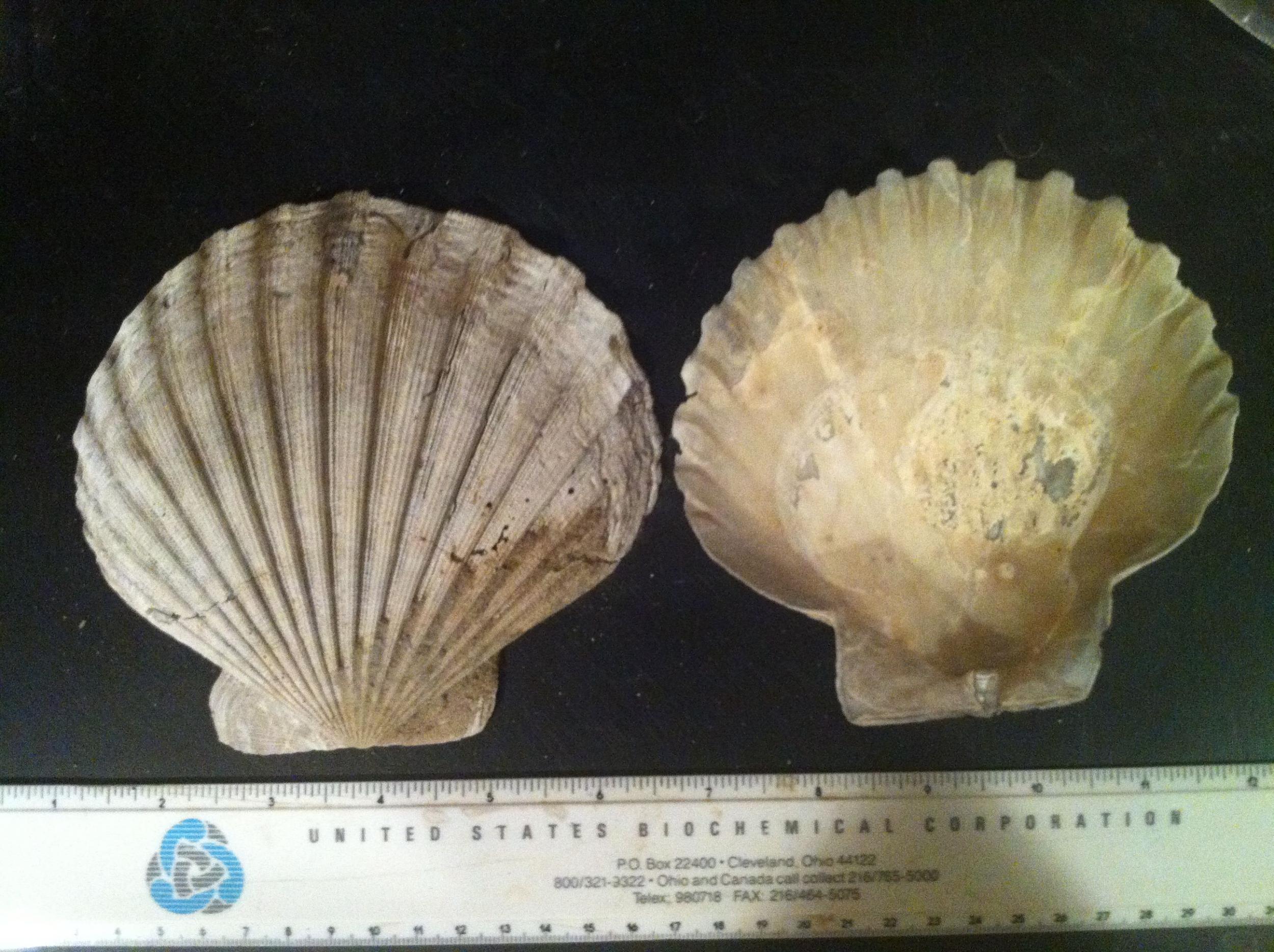 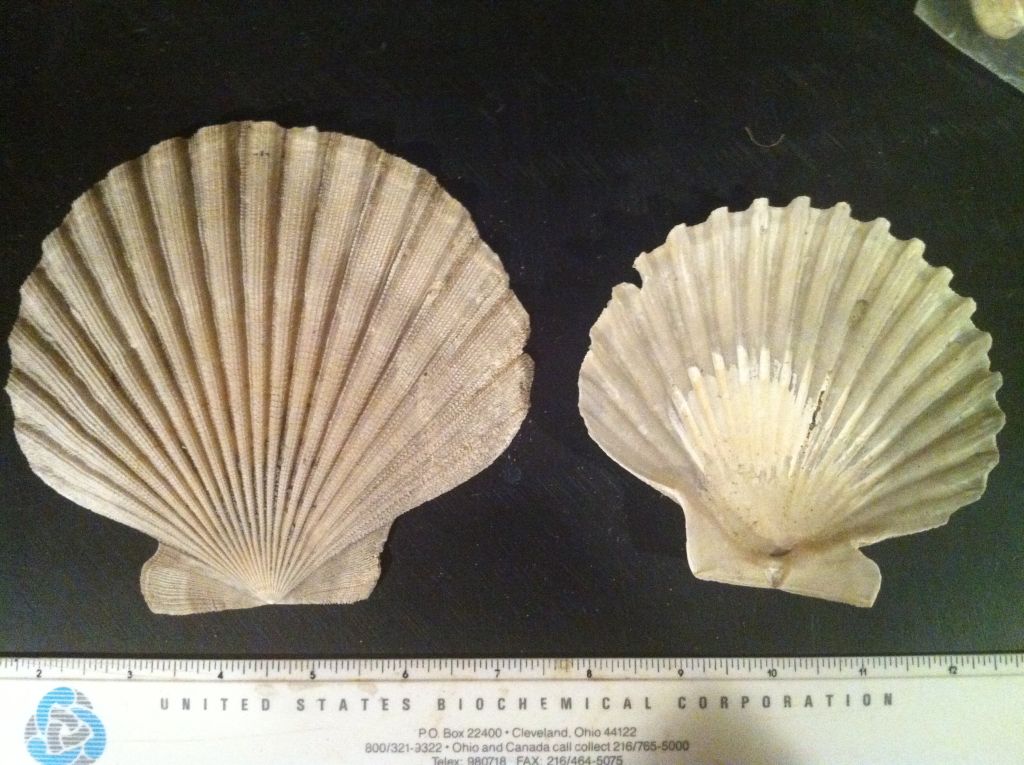 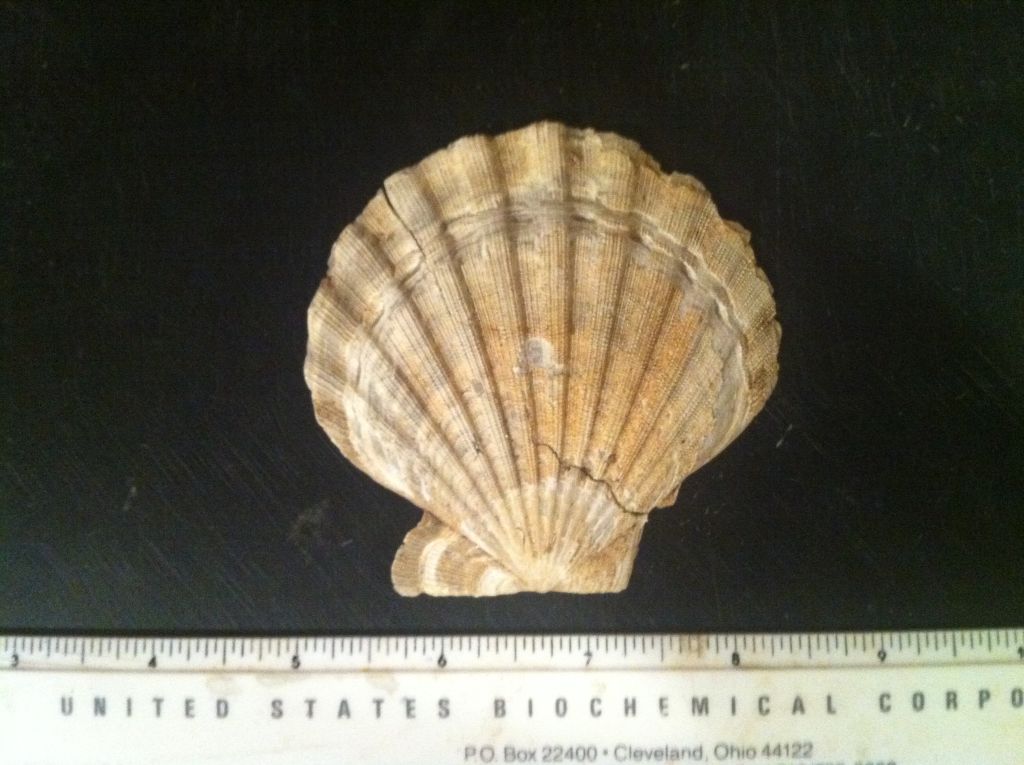 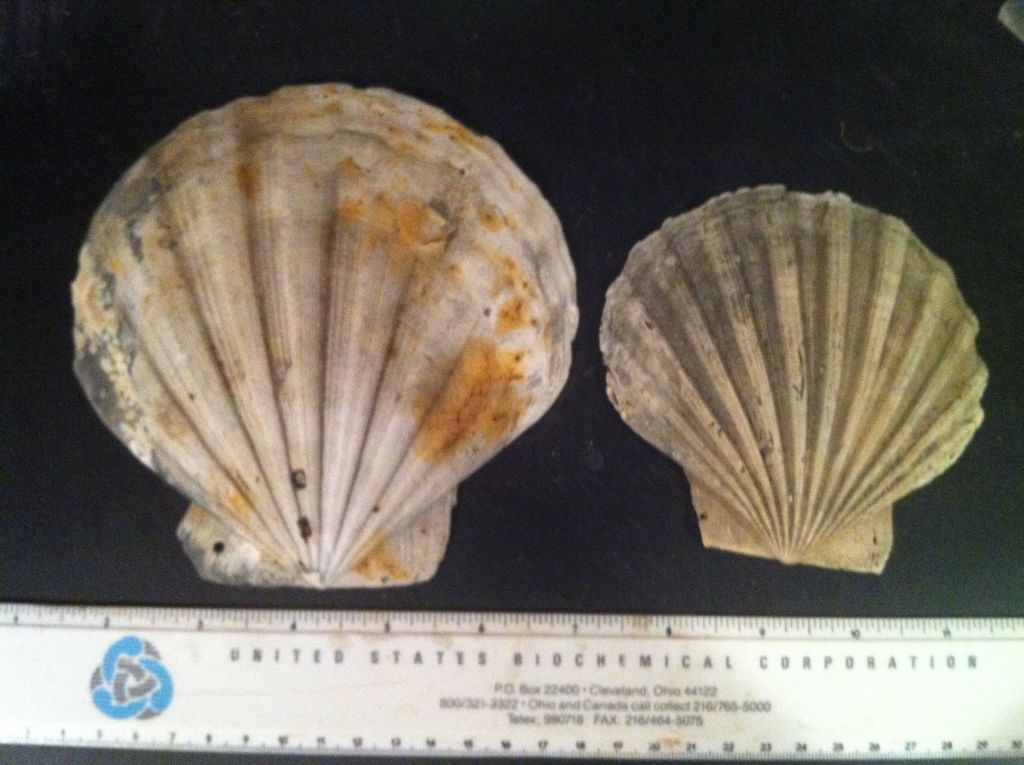 I have updated my list of fossil mollusks from the above sites as well as added a molluscan list for Locality 1019.

Gibson, Thomas G. 1987. Miocene and Pliocene Pectinidae (Bivalvia) from the Lee Creek Mine and Adjacent Areas in Geologoy and Paleontology of the Lee Creek Mine, North Carolina, II. Smithsonian Contributions to Paleobiology No. 61.