I recently received some samples of washed residues from various shales and marls noted for their microfossil content.  One of the best of these is from southern Kansas, of Permian (Wolfcampian) age, from the Council Grove Group, Beattie Limestone Formation, Florena Shale Member.  The sample is amazingly rich, and I have recovered numerous species of Foraminifera and Ostracoda, as well as many nice bryozoan fragments.  In this blog entry I would like to show one of the more interesting microfossils that the Florena Shale is particularly noted for: the oogonia of charophytes, members of the algal family Characeae, commonly known as Stoneworts.  These large green algae live in relatively shallow, fresh to brackish waters -- although the tiny oogonia can easily wash down streams to the sea, where they will settle to the bottom in quiet, shallow areas.  (An excellent example is provided by The Fleet, a brackish lagoon on the southern coast of Dorset, England, where charophyte oogonia are abundant in bottom samples.)  Charophytes have been around for a long time, the earliest known oogonia coming from Devonian shales. 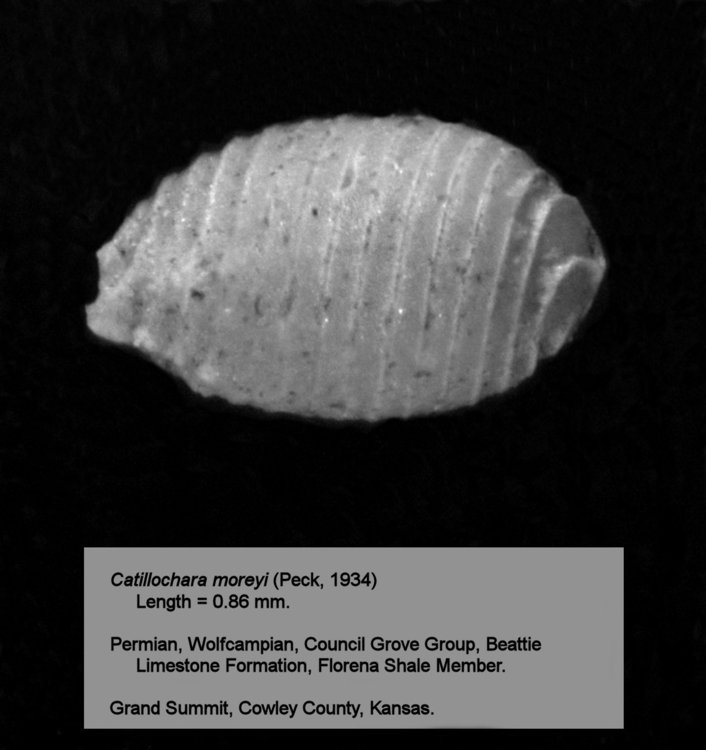 This is a relatively large specimen from the Florena Shale, very typical in appearance.  The plants are called Stoneworts because they slowly secrete calcium carbonate, which eventually coats the leaves and stems, and particularly the reproductive products, the oogonia.  These are quite small, roughly egg-shaped, with a prominent spiral structure due to the shape of strip-like cells which grow to encase the delicate reproductive cells.  These strip-like cells vary in number, a valuable taxonomic trait.  This taxon, Catillochara moreyi (Peck, 1934), like all late Paleozoic forms, has five spirals.  (To count them, one needs to look at the specimen in end view, where the strip-like cells converge to a point, or small pit -- depending on which end one looks at.  On this specimen the point is to the right.)  Whole specimens like this one are typically white, because we are looking at a relatively thick outer coating of calcium carbonate.  Interestingly, the spiral-forming strips are coal black, and are usually well-preserved inside the outer coating. 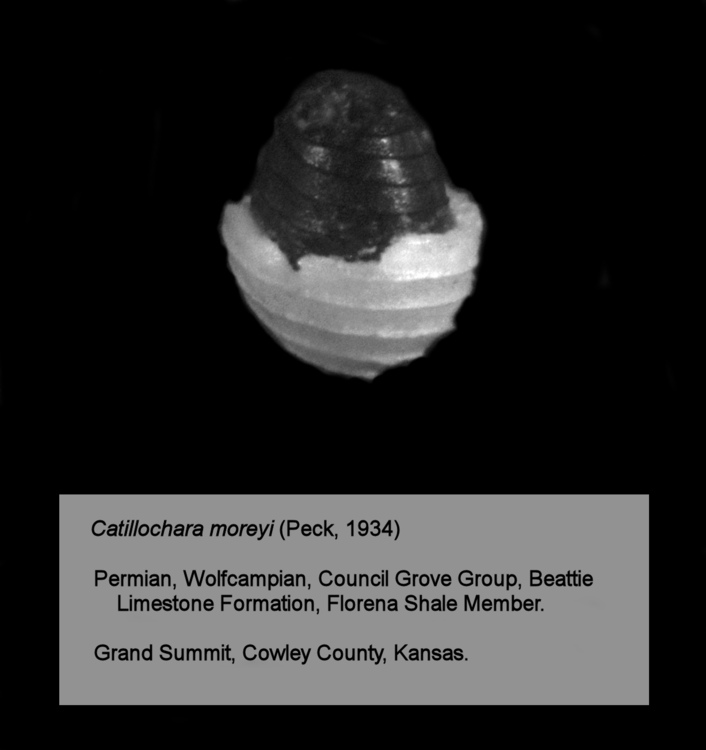 This smaller specimen is broken, and the black spiral "egg case" beneath is readily apparent.  Holocene specimens from The Fleet look exactly the same when broken, or when the outer coating has yet to develop.

In further entries to this blog I will show off a few of the more interesting ostracodes and forams.