While picking specimens of Foraminifera from the Taylor Marl, of the Texas Cretaceous Gulfian Series, I found several fragments of a taxon that I could not recognize.  However, today I found a nearly complete specimen of what is obviously the same organism. 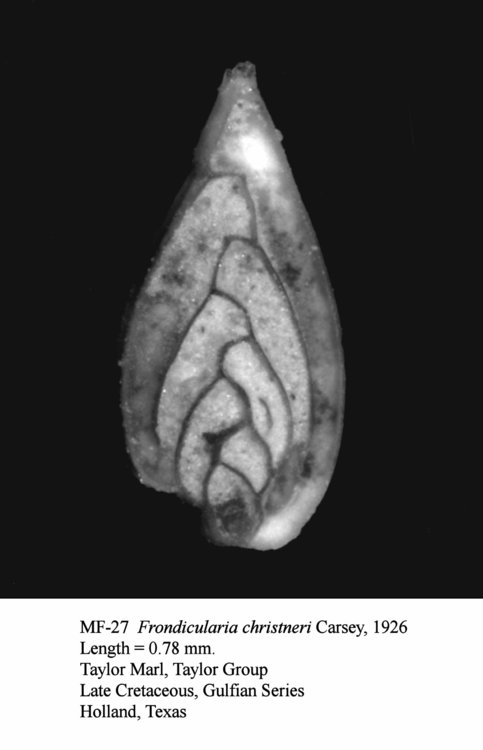 Frondicularia christneri Carsey, 1926 does not look much like a typical member of the genus.  The overall shape of the test is fairly normal, but the sutures form a rather unusual pattern, and they are raised above the test surface and slightly thickened (limbate).  The test is rimmed, and the sides are flat.  (It is this rimmed edge which produces limbate sutures when additional chambers are added.)  Note that the final chamber, bearing the terminal aperture, occupies the entire right edge of the test.  (The lower left corner of the test has been broken away, which creates the obvious asymmetry.)  This unusual structure is not unique within the genus, however; Michael's Foraminifera Gallery website shows at least one other taxon with the same type of limbate sutures.

In his 1954 Handbook of Cretaceous Foraminifera of Texas, Frizzell transferred this species to the genus Kyphopyxa, a move that is neither cited nor  recognized in the World Foraminifera Database.  In her original description of the species, Carsey noted that it is more typical of the Austin Chalk, although not rare in the Taylor Marl.  I have a sample of the Austin Chalk, and will be looking for this taxon when I get to it.