One of the problems I experience in studying microfossils is that of orienting a specimen so that crucial characters are visible.  An example: for identification it is often necessary to check the shape of the tooth in the aperture of taxa in the family Hauerinidae.  The tooth can be long or short, plain or bifid, present or missing, etc.  The aperture is on the end of the test, so it isn't possible to look into it when the test is lying flat -- which it always does when the test is lying in a tray under the scope.  Of course, it is possible to use a little glue on the opposite end and manipulate it into a vertical position: but this is a lot easier said than done!  However, there is a much easier way to look at such things -- use a mechanical two-axis stage, which will allow you to turn a specimen to literally any position under the stereo 'scope.  One of my holiday gifts this year was just such a stage, of the type most commonly used by entomologists to examine pinned insects.

To use the stage, I have a size 0 insect pin from which I removed the head with side-cutter pliers.  I put a small drop of gum tragacanth on the resulting blunt end of the pin, and touch it to the side of the specimen I wish to examine, where it quickly dries.  I stick the sharp end of the pin into the soft rubber plug of the rotating arm of the stage, and I'm set to go.  I can alter the orientation of the specimen by rotating either of the two axles of the stage; by rotating the whole stage around its vertical axis I get the third "axle".  The pin is not too distracting, and only the little area under the glue is not visible.  This works quite well! 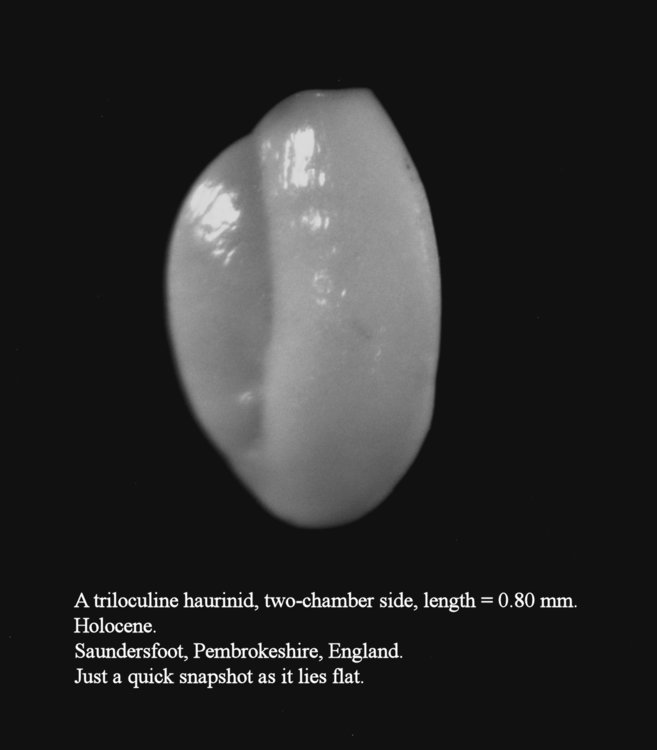 In this image, the aperture is at the upper end, toward the top.  (Oops, mispelled "hauerinid", drat...)  Two chambers are visible on this side, and there are three chambers visible on the opposite side.  One can't see the tooth in the aperture, par for the course when the test is lying flat.  Let's look at another specimen, mounted on the mechanical stage:

I rotated this specimen by 90 degrees from its "flat" position, and now the aperture is perfectly placed for inspection.  The long tooth in the aperture is clearly visible, as is the thickening of the lip.

Another example using different orientations: here the specimen is perched on top of the pin. 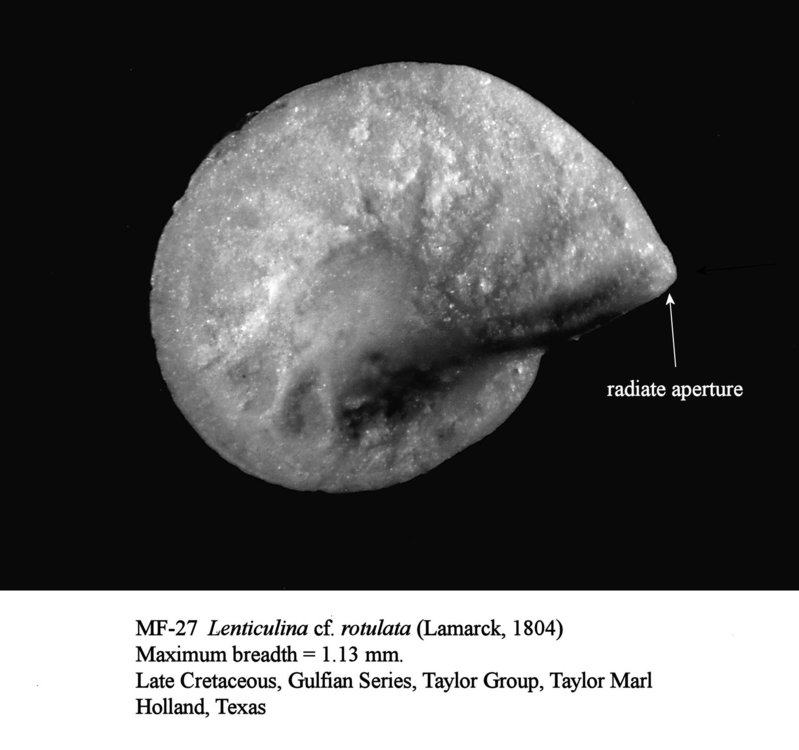 The genus Lenticulina is planispiral and involute, and the aperture is at the upper end of the exposed face of the final chamber.  The aperture is radiate; i.e., composed of several thin slits in the shape of an asterisk.  This can be difficult to see.  In this image the position of the aperture is marked by the arrow, but the nature of the aperture is not at all clear.  Rotating the test by 90 degrees to get a profile view gives us a better look, and this profile view is also most useful in species identification: 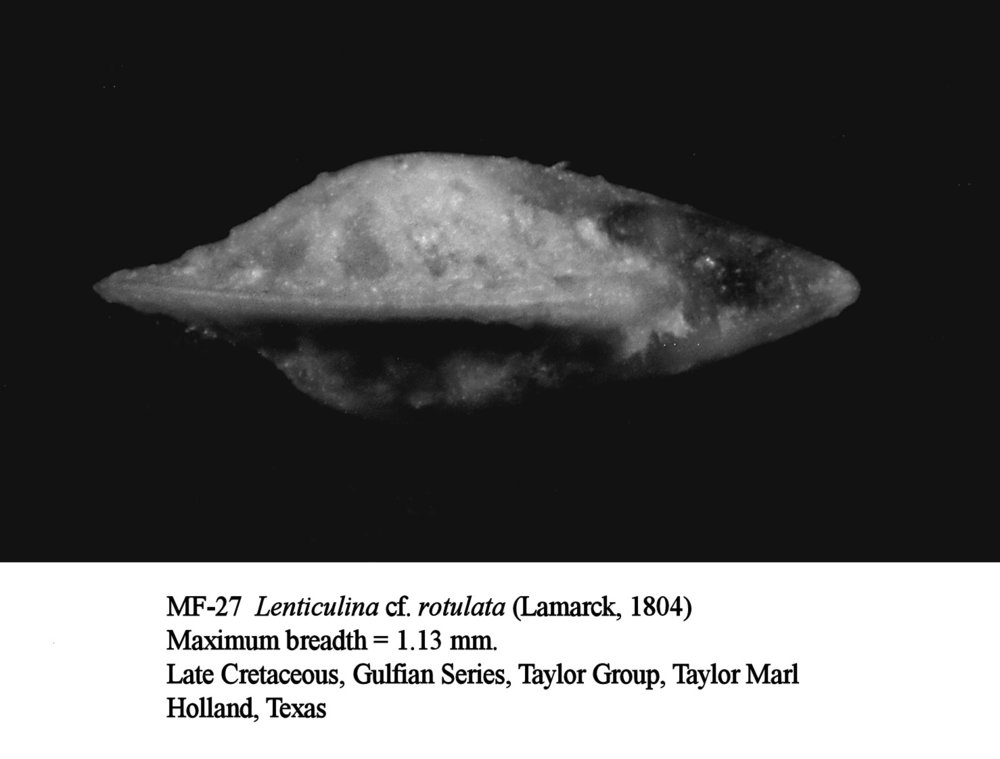 In this image, the test is mounted on the pin, which is glued to the underside of the specimen.  So why is the pin not visible?  To light specimens under the 'scope I use a two-arm fiber optic illuminator -- careful adjustment of the twin light heads can "eliminate" the pin with shadows.  (Any remaining reflections from the pin are easily removed with image processing software.)  If the pin were visible, it would extend downward to the lower edge of the image.  Eliminating the pin makes the specimen appear to "float in midair", but at the expense of a weakly illuminated underside.

This image shows the involute structure nicely, the apertural face, the swollen center of the test, the thin peripheral keel, and the pale aperture area at the right end.  The aperture itself is still not well revealed, however.  Let's adjust the orientation a little more: 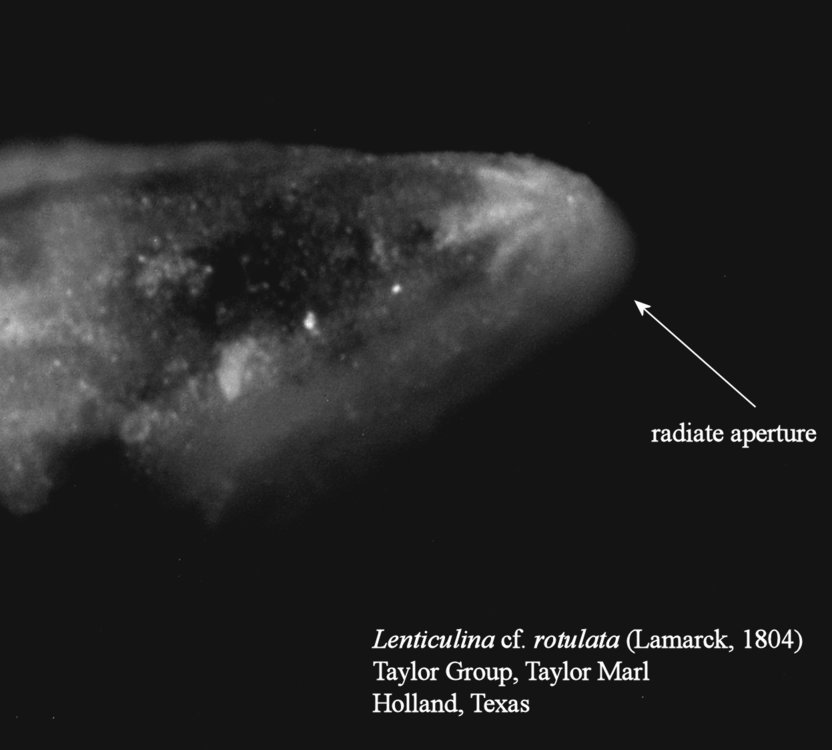 Turning the right end of the test upward toward the objective lenses, and boosting the magnification a bit, brings the radiate aperture into better view.  Three of the radial slits, filled with contrasting matrix, are fairly clearly shown.  Further rotation upward toward the objectives would provide a fuller view of the aperture, but this view is sufficient to demonstrate that the aperture is indeed radiate in structure.

This method of mounting a specimen on a pin is totally non-destructive: to remove the specimen from the pin one just immerses it in a drop of water, where the gum tragacanth will quickly dissolve, leaving the specimen completely undamaged.

Hopefully this blog entry will encourage others to explore ways to alter the orientation of their specimens, whether for identification purposes or photo-imaging.