The Lomita Marl Member of the San Pedro Formation is a well-known source for Middle Pleistocene marine fossils, and its beautifully preserved molluscan fauna has been treasured by fossil fanatics for decades.  There are outcrops in the city of San Pedro, California, although many of the "classic" localities have been destroyed by urban development.  It is well-exposed in the Lomita Quarry, located in the Palos Verdes Hills northwest of the city.  It has been dated at 400,000 to 570,000 years ago, about equivalent to the Santa Barbara Formation, which occurs further north along the California coast near the city of the same name.

The Lomita Marl is also an extremely rich source for microfossils, as ostracodes and forams are both very abundant and easy to extract from the matrix.  Most taxa in these two groups are still extant  off the southern coast of the state, but a significant proportion of the fauna appears to be extinct.  (One must hedge here, as the ostracode fauna of the Pacific coast of the United States is not very well known; the forams are better documented.)  A small sample of washed residues has given me the opportunity to begin study of this interesting fauna, and I hope to show some images of taxa from both groups on this blog.  This first entry will look at four ostracode taxa, selected simply because they are relatively easy to identify.  (Much of the ostracode fauna is known only in "open nomenclature", as in "Aurila sp. A", meaning that the species has not been recognized or is undescribed.) Bythocypris elongata Le Roy, 1943 is easy to recognize.  It is common, and appears to be the only member of the genus to be found in the Lomita.  It is a member of the family Bythocyprididae, which are smooth, and some would say "uninteresting" as a consequence.  As is normal in the family, the anterior end of the valve is broader and a bit more inflated than the posterior end.

The remaining three taxa are all members of the large family Hemicytheridae, a group with interesting surface ornamentation: 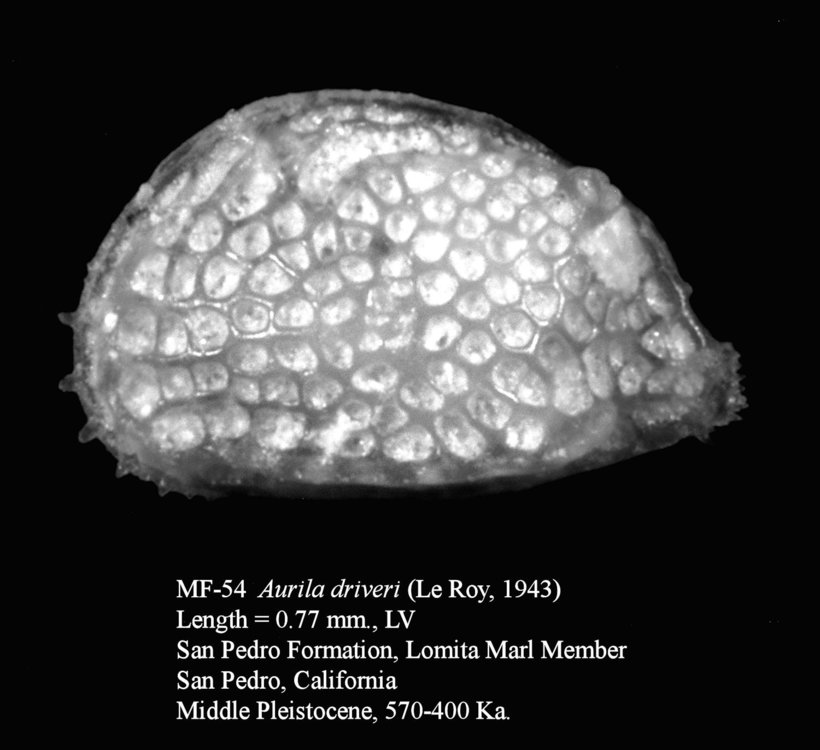 Aurila driveri (Le Roy, 1943) is one of the several members of the genus to be found in the Lomita, and the only one (as far as I am concerned), that is easily recognizable.  The high-arched dorsum and strong ventral flange place it in the large genus Aurila, and the prominent anterio-ventral teeth are characteristic only of this species.  The caudal process is low on the posterior margin, and bears fine denticles. 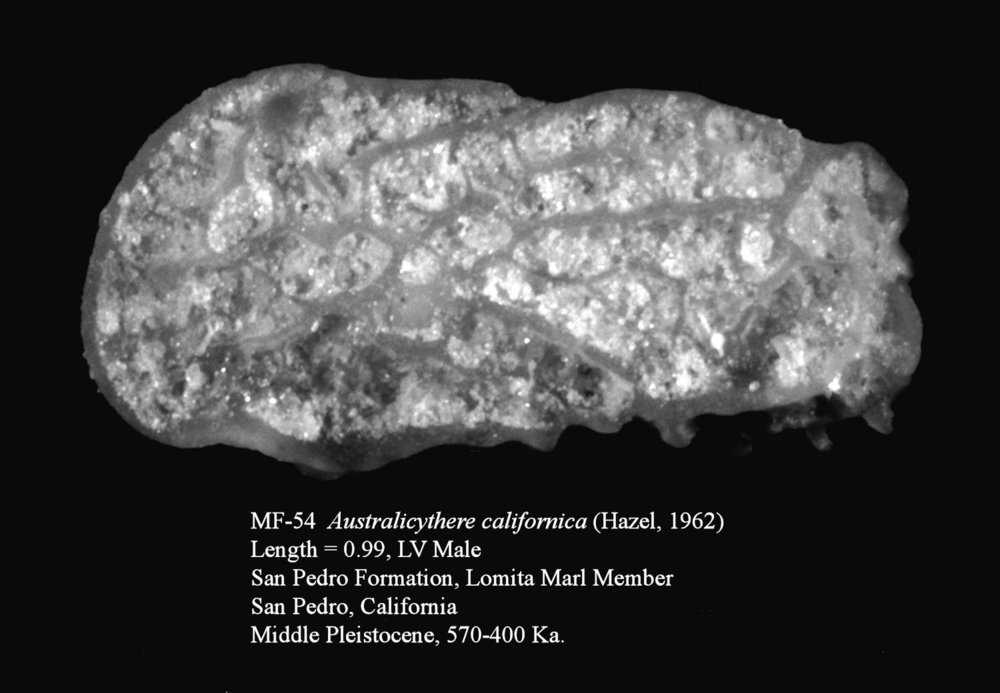 Australicythere californica (Hazel, 1962) is relatively large at roughly one millimeter in length, and is more elongate than most hemicytherids.  There is no caudal process, but typically 3-4 large posterio-ventral teeth.  The lower half of the anterior margin has some small denticles, rather worn on this specimen.  The valve outline is quite distinctive for this species. 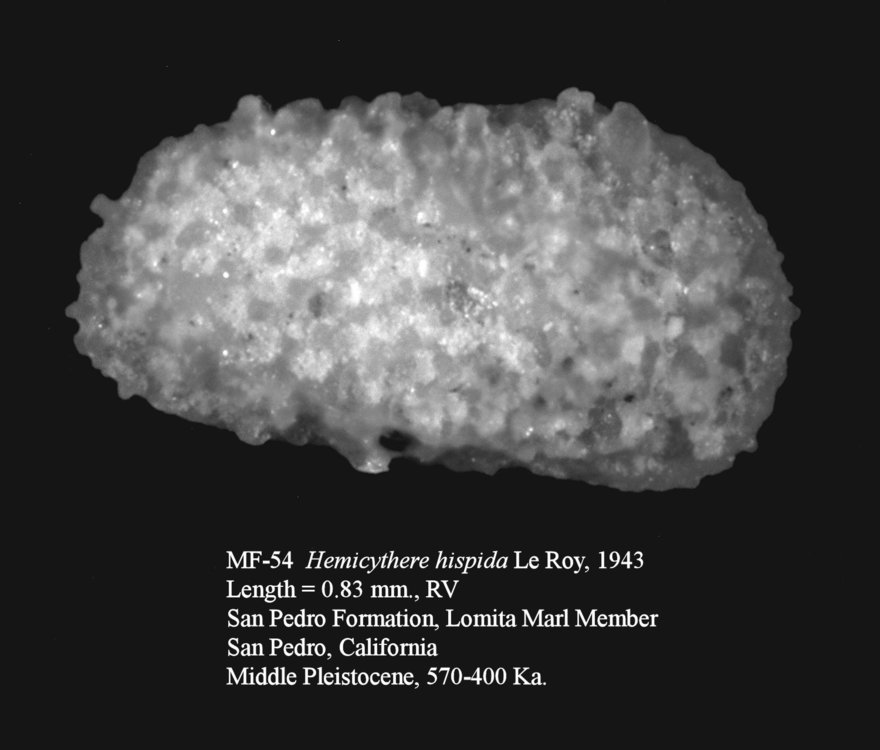 Hemicythere hispida Le Roy, 1943 is probably the easiest ostracode from the Lomita to identify, and is quite abundant.  This image does not do it justice, due to the lack of 3-D.  Under a stereo microscope it looks almost "furry", as the entire valve surface is covered with round-ended tubercles.  (The lack of 3-D here is due to the excess white matrix obscuring all but the ends of the tubercles.)  This species also has a particularly prominent eye tubercle, seen here at the anterior edge of the dorsal margin -- under the microscope this tubercle appears somewhat shiny, rather like glass.  (I had to sacrifice the shine to get decent illumination of the rest of the valve.)

To make these images, the specimens were simply laid flat on the inside of the lid of a micromount box.  Not very sophisticated, but it gives a nice black background -- at the expense of making the specimen a bit more difficult to illuminate evenly.  And it's quick and simple...........

That's it for this entry.  I will try to illustrate some of the many forams to be found in the Lomita in a future blog entry.