Today was a memorable outing, and our net results were the best I've ever had for a single day without driving 2 hours.

This morning started quickly. My step brother, Christian, was already knocking on my door at 9:30 - yes, that may be late in the morning for everyone else, but it's a full hour before I'm usually fully awake. I guess that's the trade off for late nights!

Yesterday we made plans to spend our day today hunting a spot that I was used to scouring but had not visited in a while. That was not the only motivation for choosing this particular spot though. When I originally discovered this area, there were lots of associated large bones in the creek.

After finding one of those water stained vertebrae, I decided "wow, that's huge! Not fossilized though.Looks bovid. Must be cow...eh "  *toss*

Looking back at it, I was (and am) kicking myself hard enough to break a toe. I never even thought to look for a skull, to just be sure, and the more I think about it, the more the odds fall in favor that the bones were bison, and I completely disregarded a very interesting Pleistocene skeleton.

So, this was going to be an attempt at redemption - I had observed many bones downstream during successive returns (still met with more, "eh, must be cow"), but this time we were going to do something about it. The locality is cretaceous, so we'd hunt cretaceous material on the way up, keeping a look out for those "cow bones", until arriving to the site where the bulk of the skeleton used to be. At least, that was the plan...

After parking by a small business (which hasn't towed me a single time- shout out to them), we made our way on foot over to a bridge, which we then started descending. The creek is on public land, but there's no parking or easily accessible points down to it. Once down at the creek, we wasted no time and took a turn left - the direction I've always gone.

Christian was immediately impressed by the enormous size of the Exogyra oysters, which are abundant here. He's not an ardent fossil hunter, meaning he's never had the intent to go do it on his own, for example, but he is impressed by fossils and has a wickedly perceptive eye.

We worked our way up the usual spots - it was his first time here, but probably my sixth or seventh. I pointed out to him where I made my best finds  - the mosasaur tooth, the plesiosaur caudal rib, a bison tooth, etc, but in the end we didn't find much there. The "bison" skeleton was nowhere to be seen anymore, and while we found other cool fragments of definitive Pleistocene bone, none were identifiable further.

One find of note however, was an echinoid that Christian spotted. I don't know how the dude does it, but he finds echinoids everywhere, it's like a superpower of his. No matter where we go or what we're doing, if it's outside, he'll spot an echinoid somehow. 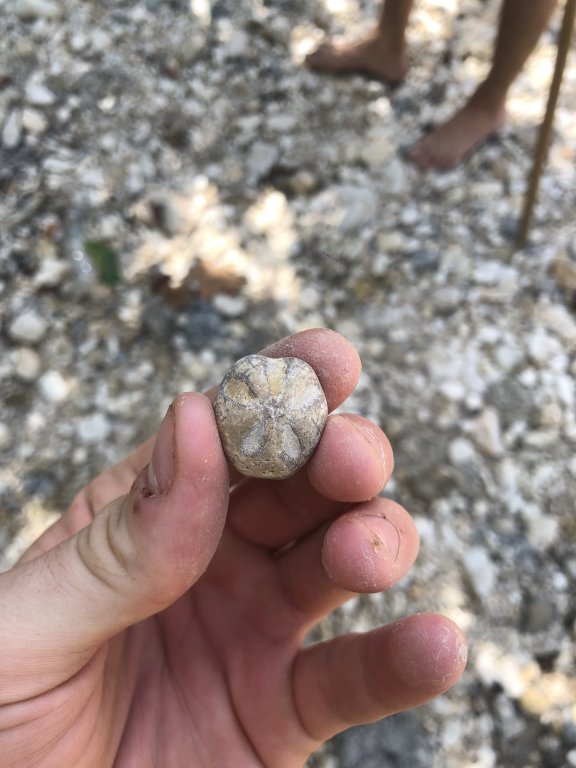 (Below - an interesting mushroom, which I believe to be Ganoderma sessile ) 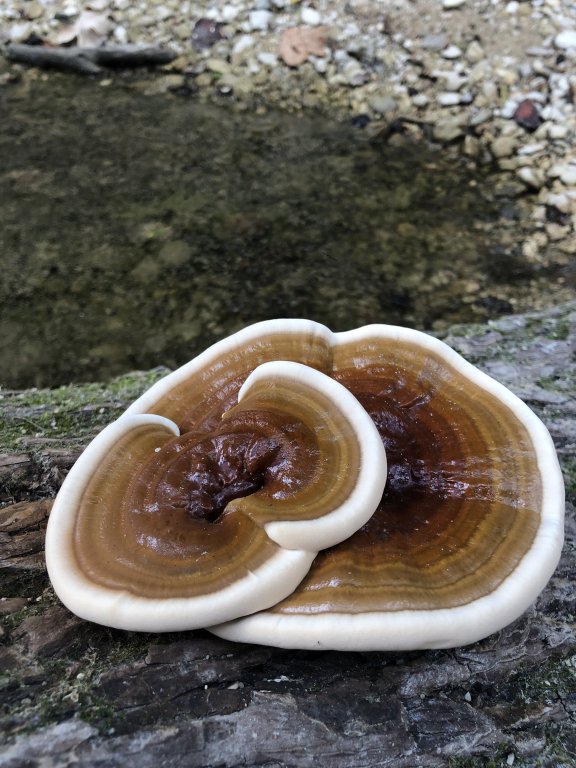 The real party started once we made it back to the bridge where we began.

Our plan was to scout the left side of the creek, the part I've never hunted before. We rounded the corner, and upon seeing the steep banks, it was clear that we had to walk across some deep creek crossings. I took point, and seeing that the water came almost to my stomach, Christian decided to settle for what he had found and instead poke around under the bridge again while he waits for me to finish scouting.

Immediately after finishing my first deep crossing, and as Christian was starting to walk away, I found my first proper arrow head, ever. Previously, this creek had produced some rudimentary stone tools, one of which we even found earlier on this excursion. But they were nothing like what I had stumbled across here, sitting proud and jet black under a centimetre of water. 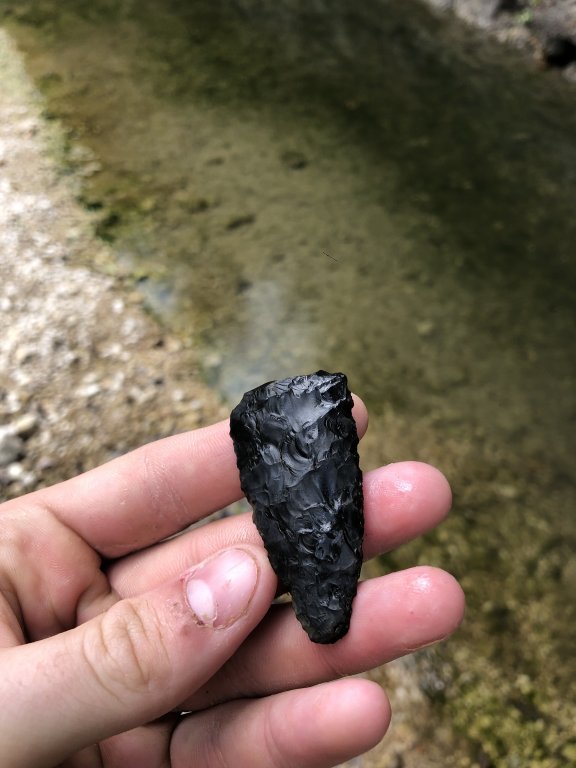 I yelled back for Christian to come check it out - if there was any motivation for him to cross the creek and continue to scout with me, it would be this. Apparently, he was probably a cat in his past life, because even this, found 5 minutes into this scouting run, was not convincing enough. Besides, it had started raining, so he still decided to poke around under the bridge.

From this point on, I decided to make haste. I wasn't a fan of being in the rain either, but it certainly wasn't enough to stop me. I made my way down, crossing through water a few more times to avoid climbing the steep banks, and eventually came to some great looking exposures with many small, tight bends in the creek that accumulated lots of gravel.By this time, the little cloud burst had cleared, and things were nice and cooled off. I took a video to show him for when I got back, but before that video I accidentally took a picture of the beginning of the exposures: 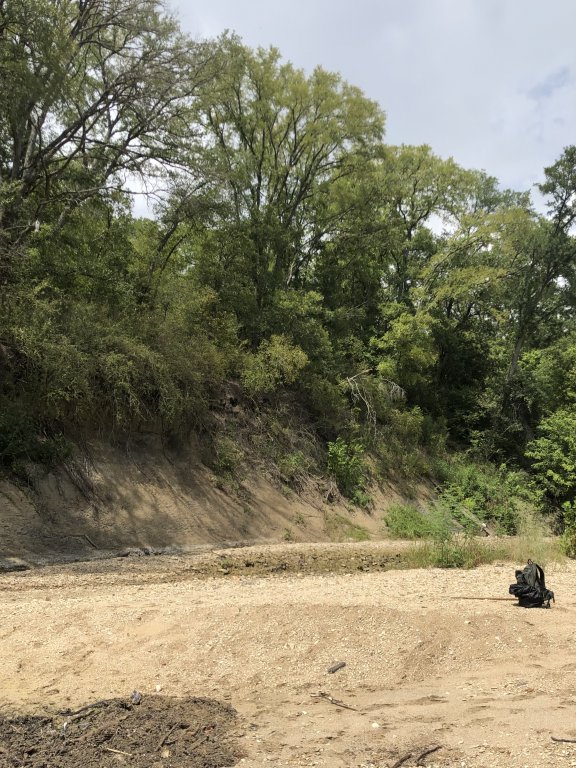 On the walk back, I found a palm sized piece of chunkasaurus, and the mother of all Exogyra, with both parts of the shell still present, I imagine it's Exogyra ponderosa, but I know that there are some other big local Exogyra species as well, so I could be off. 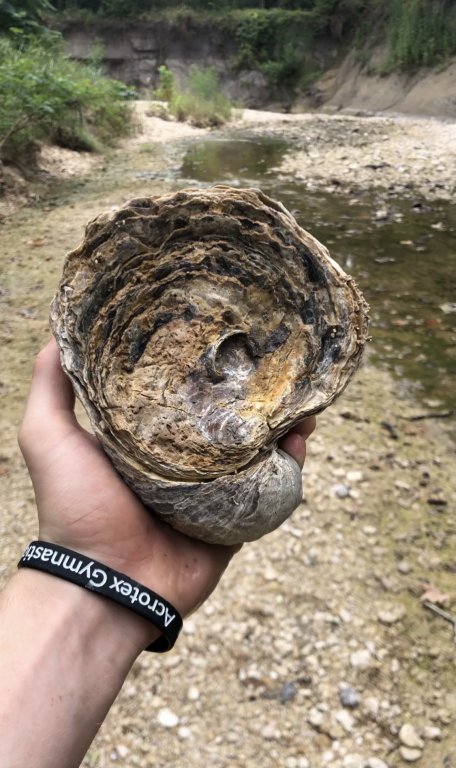 Scouting was successful, so I continued walking back in earnest. When I got back to the bridge, I quickly showed Christian the tid-bits I was returning with, and asked if he had any success. "Oh, you have no idea..." he replied. He then held out his hand, and we both  just crumpled into another dimension. The hype was unreal. In his hand, and as the product of just thirty minutes, were two Ptychodus mortoni teeth, another echinoid, a piece of Enchodus(?) tooth, and what looks to be a Cretoxyrhina mantelli tooth - a first for both of us.They were small, but none of us cared - this was LOCAL! Three shark teeth in 30 minutes is absolutely bonkers! Furthermore, Neither of us had ever found a fish tooth. This was an exciting hall for so short of a time. 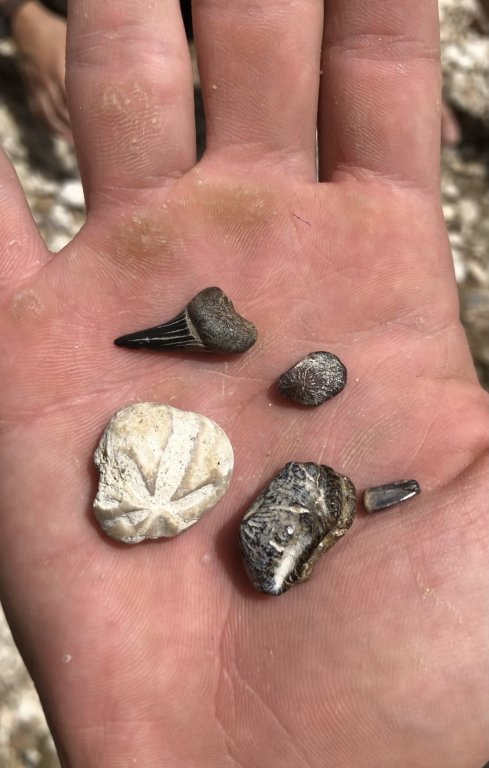 He was as stunned as I was. This was the same bridge gravel I gave minimal attention to all 6 times I've been here, and we both walked past it or spent time there already, before he really started looking as he sat around waiting for me in sheer boredom. Apparently, all he had done was assign himself to small (as in a few square feet) patch of gravel at a time, giving the smallest rocks the most undivided attention, picking up anything darkly colored.

Needless to say, we both had new drive to stick around longer, now using this technique to hunt,  but funnily enough (I guess I'm bad luck, lol) we both couldn't find anything else for about 40 minutes. That was until Christian then decided to uncover the next crazy trip maker of the day, a small Ptychodus sp. still in matrix!! 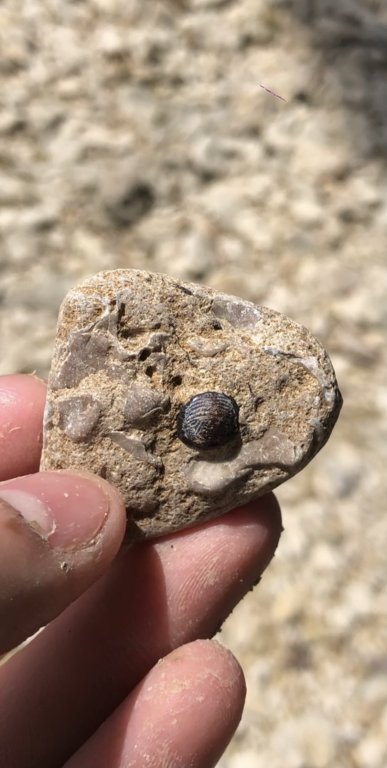 At this point I was reduced to a blubbering fool, and had to explain to Christian the gravity of his find. Now more than ever I had a fire under me to at least pull one shark tooth from this spot today. After another 10 minutes, my hard work was rewarded! ......with one of the tiniest shark teeth I've ever seen 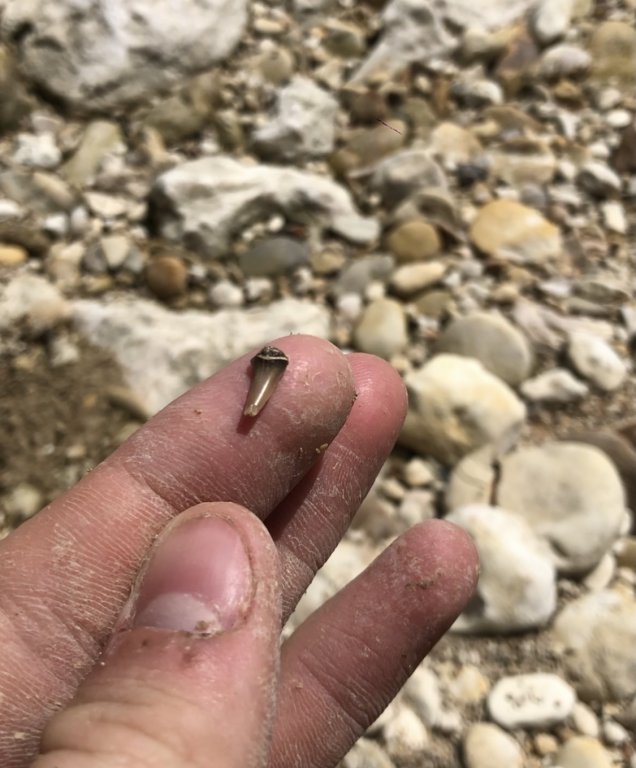 Some seconds after taking this picture, I noticed an echinoid just to my right, and plop! There went the tooth. I couldn't find the tiny tooth again, but it was alright, because it's sacrifice made for a sweet consolation prize 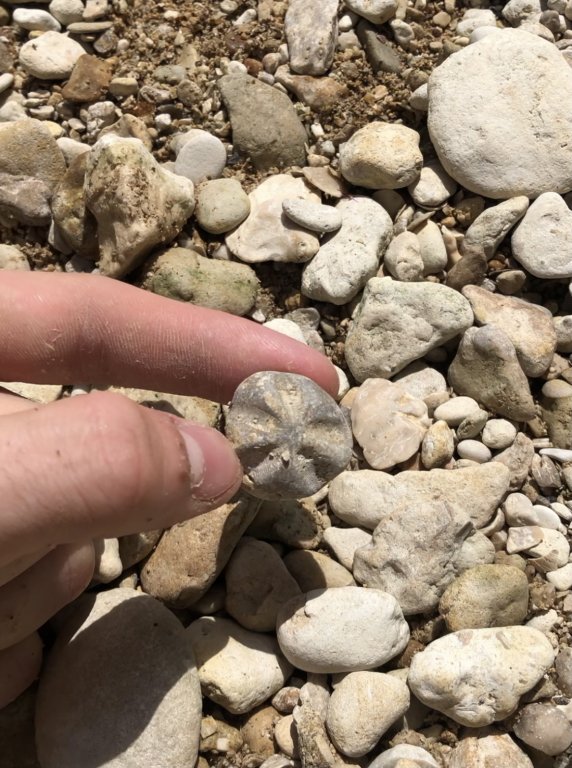 Some minutes later, while I was standing up, I saw yet another echinoid, but this one was different to the others... and what a great little sea urchin it ended up being. It still had some texture on it, and despite probably being too water rolled to suite the taste of an echinoid aficionado, it was more than enough for me, as this was the first echinoid I've ever found with it's little bumps preserved. 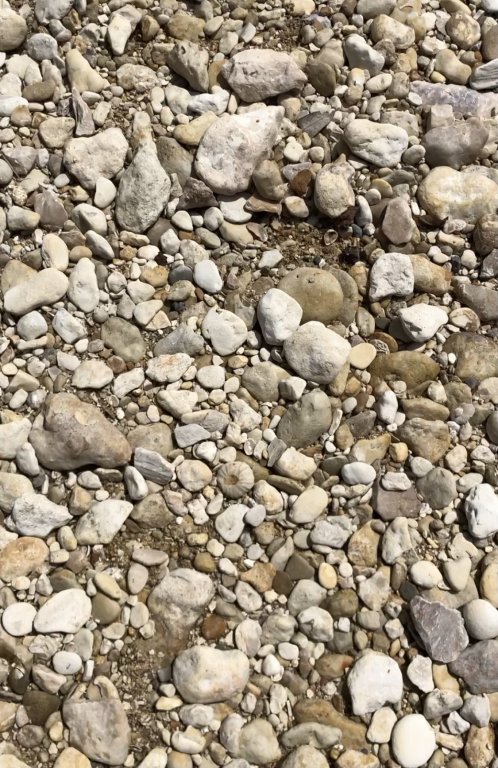 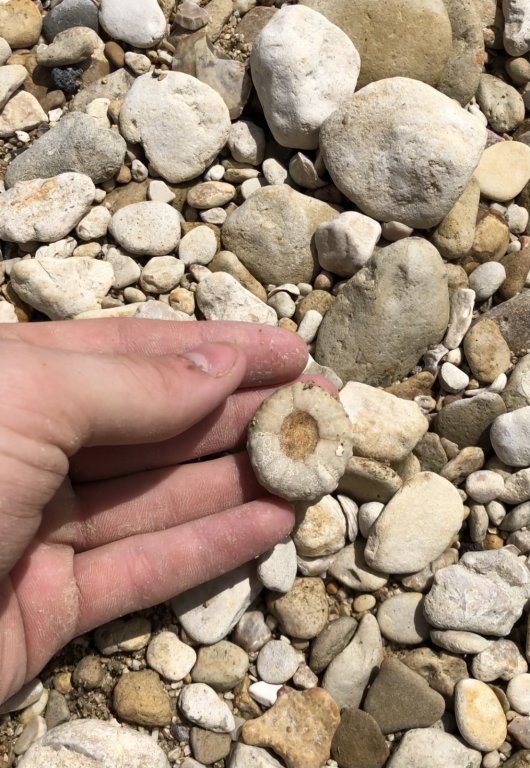 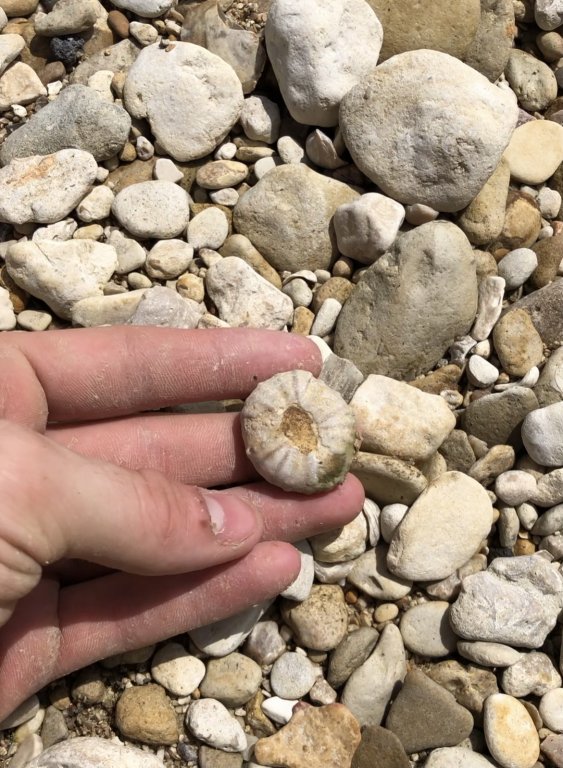 My last find here I almost missed - it was an ammonite chunk of a species I didn't recognize. The chunk is incredibly water rolled, but still note worthy because of those distinct suture lines and a color that I'm not used to seeing. 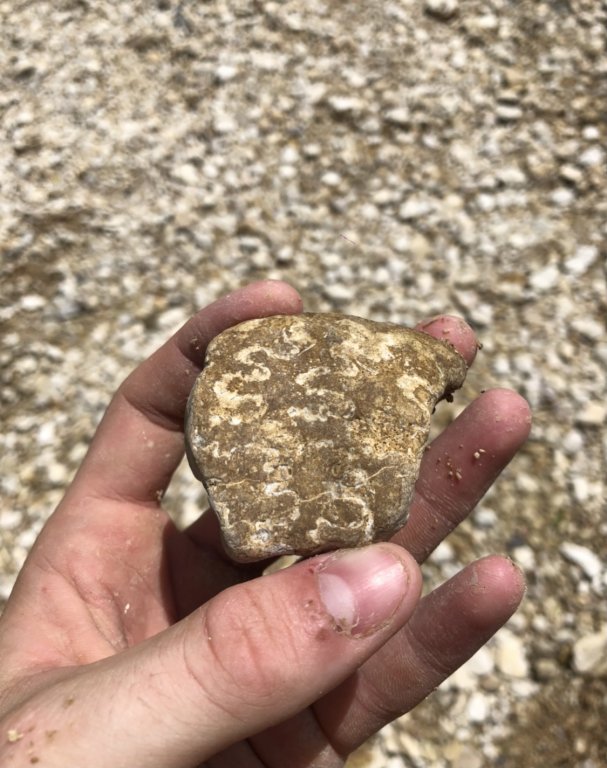 So, while we walked away with no bison material, we at least had new perspective on on old spots, and I'm sure this place will produce many more fossils and memories in the future.