Today was the best fossil hunt I've ever had. I feel like I say that every time lately, but it really is true.

Today was attempt number three at investigating the Eagle Ford.

Attempt number one, in Travis county, found me wandering into the Austin Chalk. I did get a great consolation prize though, in the form of gigantic segment of a Parapuzosia sp. ammonite.

Attempt number two was in Williamson county - the Eagle Ford is rare here, only really exposed by housing development. For that reason, I was quite pleased to discover a permanent exposure with considerable physical effort. It yielded one nice keeper Mortoniceras ammonite.

Today's attempt found me in Travis county again. The creek was a lot different to my usual Ozan stomping grounds in that here, everything was shale, from the pebbles to the banks. I felt a bit out of my league, as this was not an environment I had figured out how to hunt yet.

I decided to walk up a ways, to scout first and then look more closely on my way back. To avoid bombarding ya'll with words...the scout was just unsuccessful. The only spot I made a mental note of was because it had shade. It all seemed so barren.

About thirty minutes into my walk up, I hopped down a 6 inch ledge, and crumpled. I couldn't believe it - strong, blunt pain filled my right foot.

I'm only 20, and make considerable effort at fitness. Furthermore, I'm a former gymnast, and this was my healthy, uninjured ankle. It should theoretically be strong as Iron.

Oh well. I hobbled up, and decided to *delicately* limp my way up still. My foot wasn't hurting much yet, as I think I was still running on adrenaline.

After 20 minutes of this though, I was getting fed up. My thoughts at this point were something like "Here I am, in an ugly creek in an ugly part of town, only to get injured and skunked. wow"

I slowly made my way down until at last I made it to the shade spot I noted. Here I sat for a bit to take weight off my foot. There was a great piece of shale here, filled with tiny little shells. "That's a change" I thought, and picked it up to take a closer look...and boom...I was looking at a Ptychodus tooth.

What a change of fate - suddenly, this place was worth my attention, and I quickly forgot about the stiffness in my foot.

I quickly figured out that there was a very thin (maybe an inch or two), slightly discolored layer that held all the fossils.  I began mining this layer in a similar fashion that one would mine Knightia at the Green River formation of Wyoming. My knife was a chisel, and I would uplift pieces of slab from the rest of the bank one at a time. I soon decided to spare the rest though - it irked me to scar the land like that, and after all, it would be an incentive for returning.

The Ptychodus finds started racking up. Never have I ever found more than two Ptychodus in a day (except for once at post oak creek), but here I was able to find two simply within arms reach of each other. I even left some of the very small Ptychodus, only taking those of interest to me... I always felt weird about those who took every tiny or damaged tooth they could see when they already have an arm full of others. I decided that perhaps some of the neighborhood kids might stumble across one of these little Ptychodus teeth, hopefully igniting an interest. 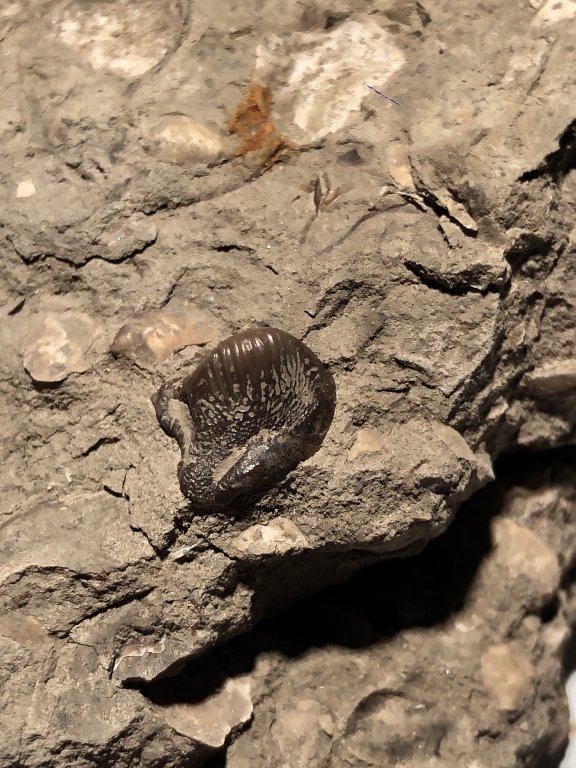 Some of the slabs of this layer must have tumbled down to the creek below, so I took a closer look at the jumbles of slabs that made the bed, and made some great finds.I much preferred this approach. 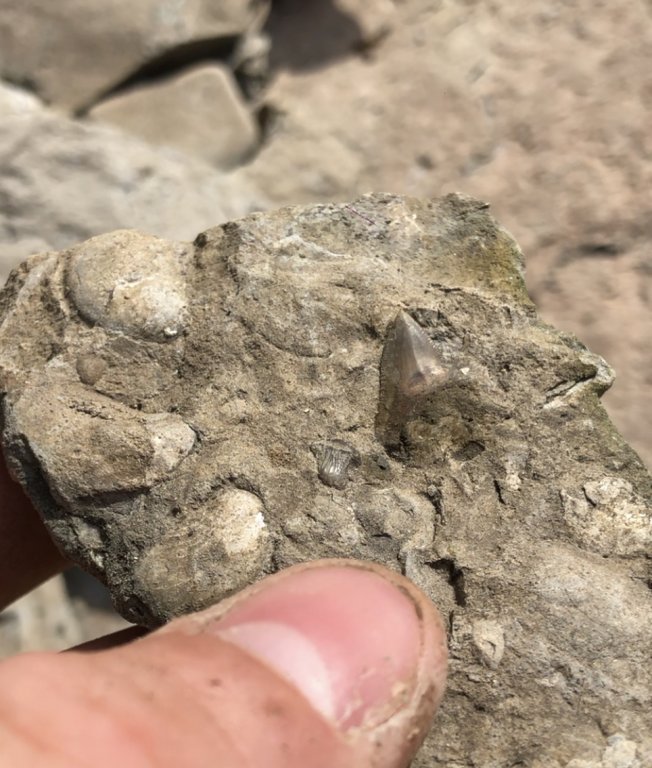 (Squalicorax next to a little Ptychodus sp. Believe it or not, despite having visited some Ozan waterways, Post Oak Creek, and the Waco Shale pit, this was my first Squalicorax ever) 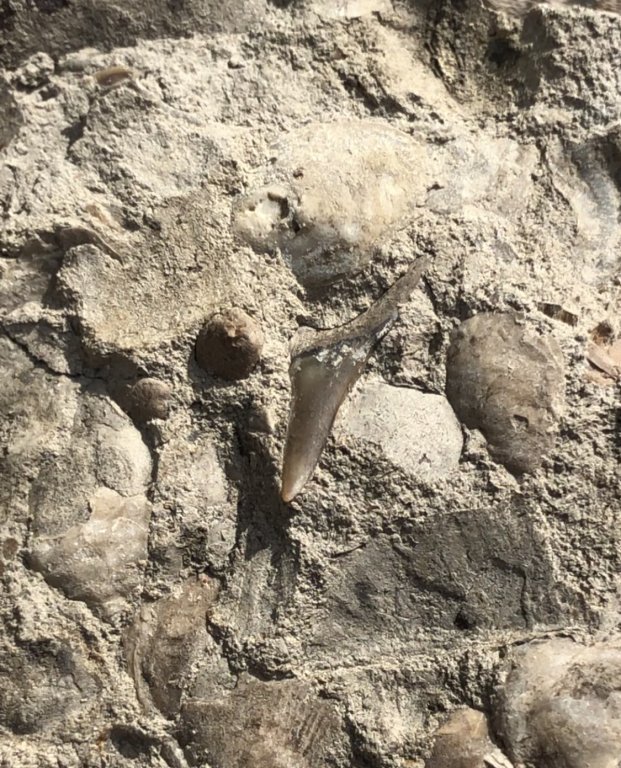 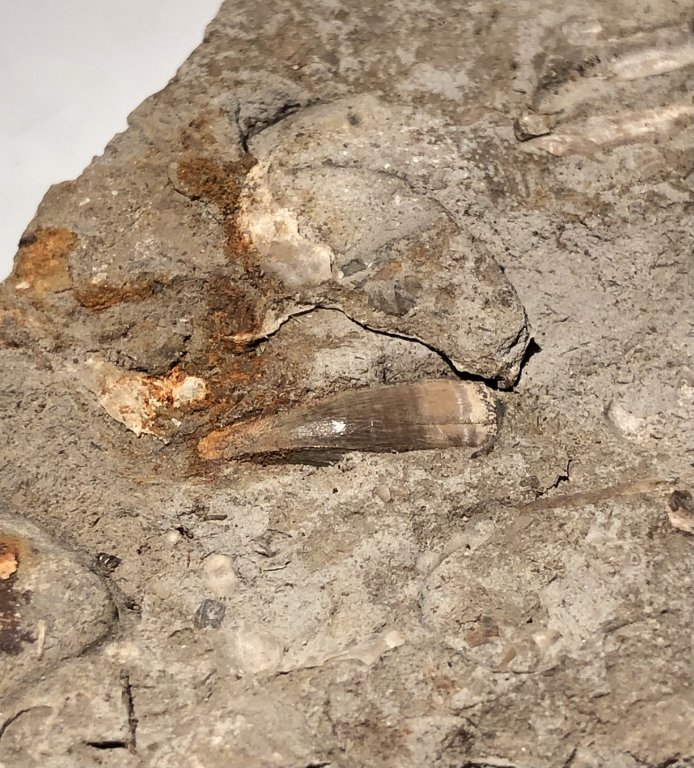 My foot was aching again, and the day was 10x more successful than I expected. I decided if I had to head home, I'd be happy. But, my resolve caved, and 10 minutes into walking back I decided "screw it, there's plenty of sun left, what am I doing??"

So again I limped back and made my way a little further up again, past the first shady spot. It was a good decision 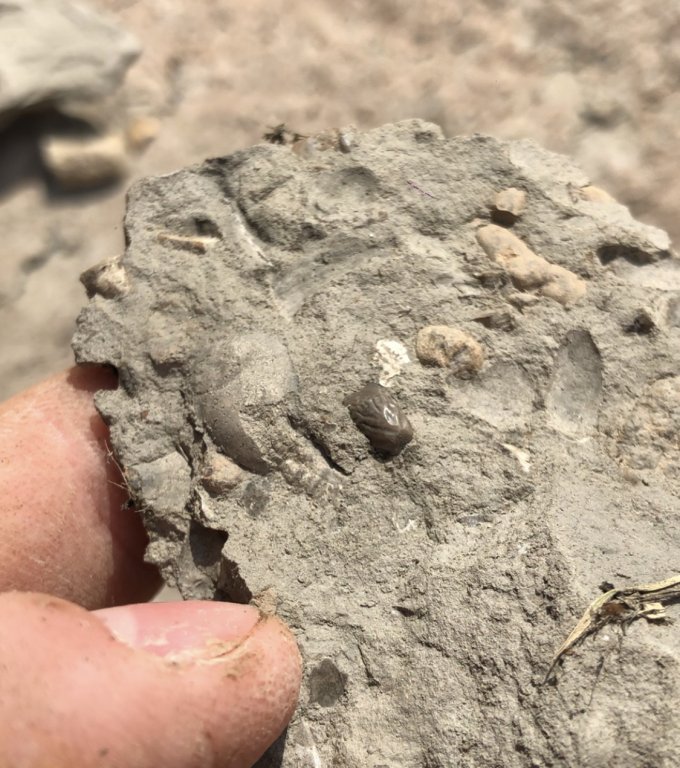 On this backwards walk, right after finding that odd little Ptychodus, I found a loose slab in the creek that blew my mind. On it, there were 5 teeth -

2.) A tiny fish tooth right next to it

3.) A stout, curvey tooth about the size of my fingernail (crossing my fingers for Mosasaur)

4.) a small shark tooth root, with a little bit of the base of the blade

5.) A small, thin fish tooth on the backside (likely enchodus) (not pictured) 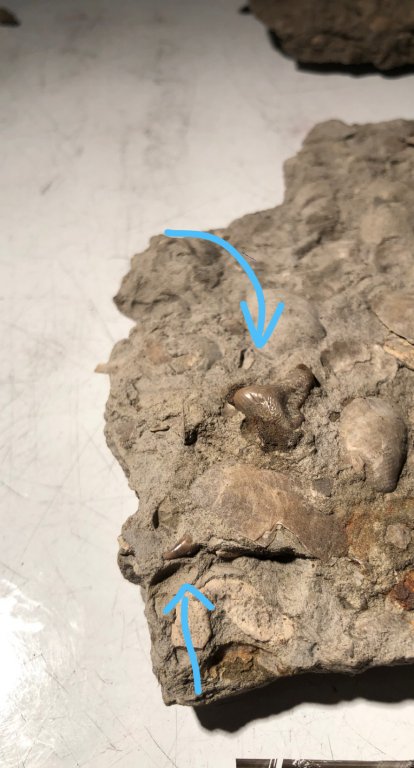 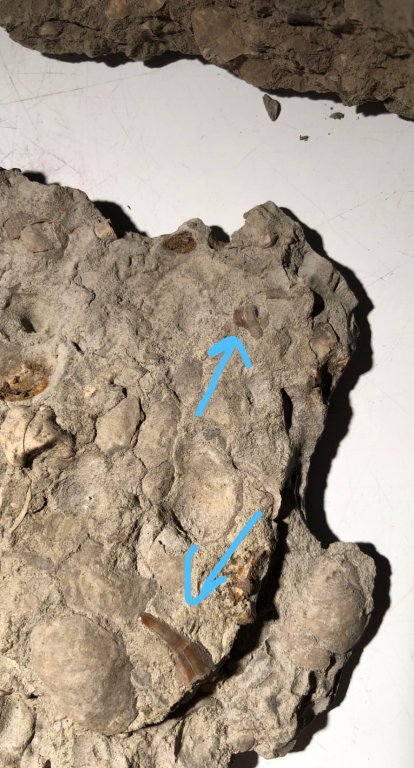 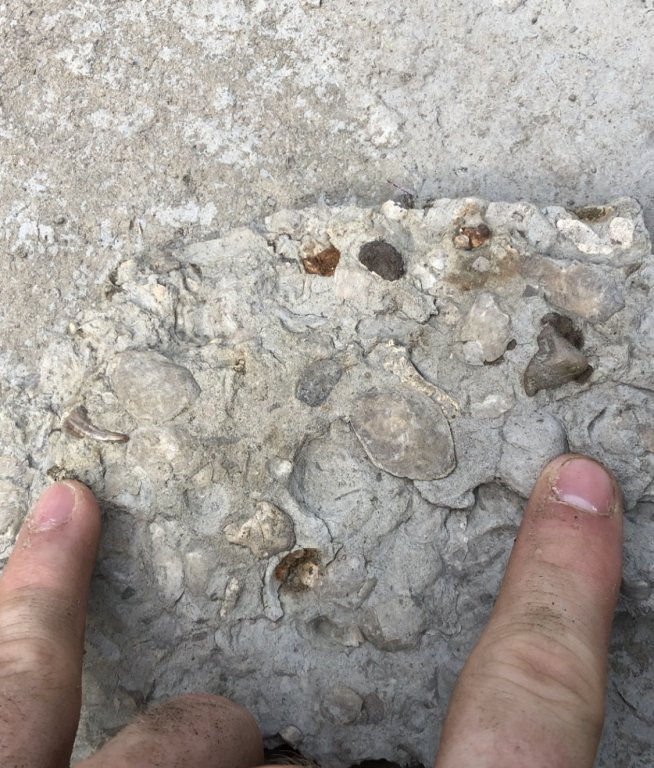 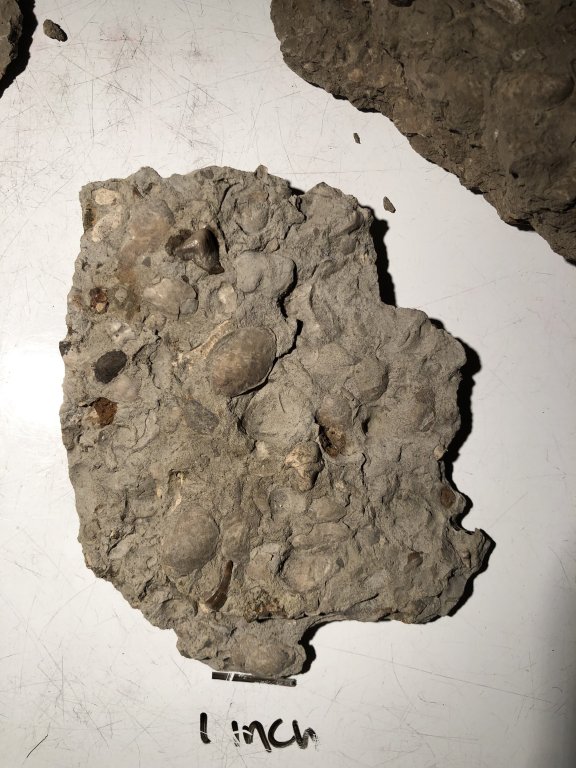 What a turn the day took. Maybe the sprained ankle was a test of grit by the paleo gods, with these great specimens as a reward, lol. It's a trade off I gladly take, even as my now swollen, discolored ankle stares at me through bandages from it's position on my desk.

This day was certainly a day for the books!