Last weekend was one I'll never forget... I've barely processed it, but now that I can be more coherent, here is the story of the mosasaur we found

On September 11 & 12, I researched and found new fossil hunting area (to me), that exposed the Eagle Ford formation. I decided to scout it, and that scouting trip ended up being wildly successful. On the first weekend of my scout, I walked away with several ptychodus teeth, a great squalicorax, and two small mosasaur teeth, all still in matrix. Many of the ptychodus teeth here represent a species that will be described next year by Shawn Hamm, and are similar to Ptychodus anonymous. 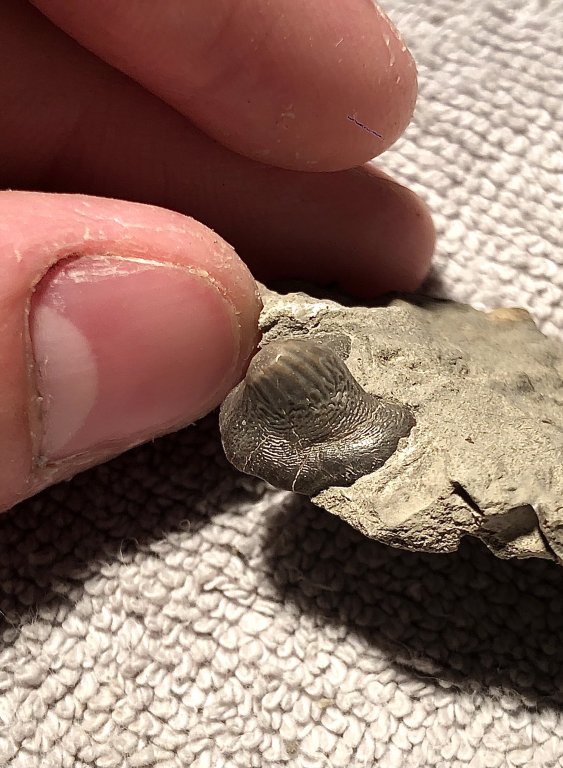 Fast forward a week. It's Friday, September 17. I returned to my new honey hole a second time, intent to explore a little more. The spot I was working on the week before produced more ptychodus, fish bones, and fish teeth. It was fantastic, and I decided to keep a keener eye out for a different spot to work on next (still in the same area).

Walking back, I spotted a great exposure of dense shell hash, at the bottom of the creek. The barren, blueish layer of shale that usually covers this hash had lifted up in one big slab, probably with a flood, and revealed the nice patch I was looking at now. Feeling pretty lucky, I sat down and got to work. "This is the spot to spend the rest of my time here on", I decided.

I got to work lifting slabs, expanding the exposed patch, and had some nice results. More Ptychodus teeth, and the odd Scapanorynchus tooth revealed themselves. One slab had a little ptychodus on it that I popped loose with my finger. Immediately below it sat another tooth, in the same orientation that it would be as part of a mouth plate. That was crazy! Perhaps I have a partial mouth plate on my hands (spoiler alert - I still need to prep it to find out)

By now, it was late afternoon, and the day flew by. I suddenly had the realization that I was about to be late for work, and had to speed back. I made a mental note to come back to this excavation I had started the next day.

Recently I had gotten my older step brother interested in fossil hunting. Today marked the first day he was keen enough to go on his own, rather than with me....however, I should preface this by saying he was only alone because he wanted to hunt quite early, at 8 AM.....my gears were barely even turning yet, so I told him I'll meet up with him a little later.

Over the phone, I told him where to go, what type of rock to investigate, and where the spot I was excavating was located. After finding the excavation I had started the day before, he sat down to continue my work until I got there.

As he told it to me later, he picked around in the rubble I had left the day before, to see if I missed anything, and then got bored and decided to lift the next loose looking slab...and BAM, he was met with bones. Once I picked up the phone, I was off like a shot.

Upon arrival, I immediately realized that we were out of our depth, as it seemed like the bone continued further on under the slabs. Before we even touched them, I hastily contacted @JohnJ, since I had no idea what to do next. He couldn't be there due to a commitment, but the advice he gave to us about continuing the excavation gave us enough confidence at least start. Throughout this dig, John was the crutch that made the whole endeavor manageable - without him we would've been completely lost.

(Here's what we saw, before any excavation) 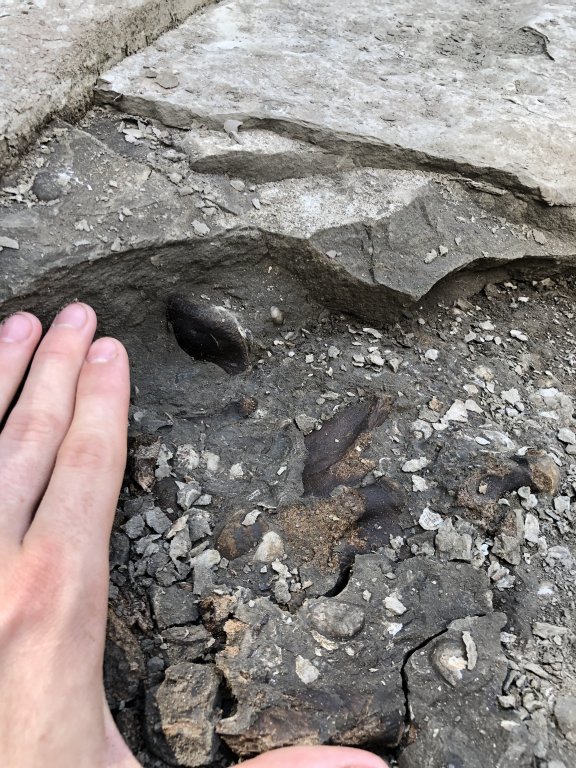 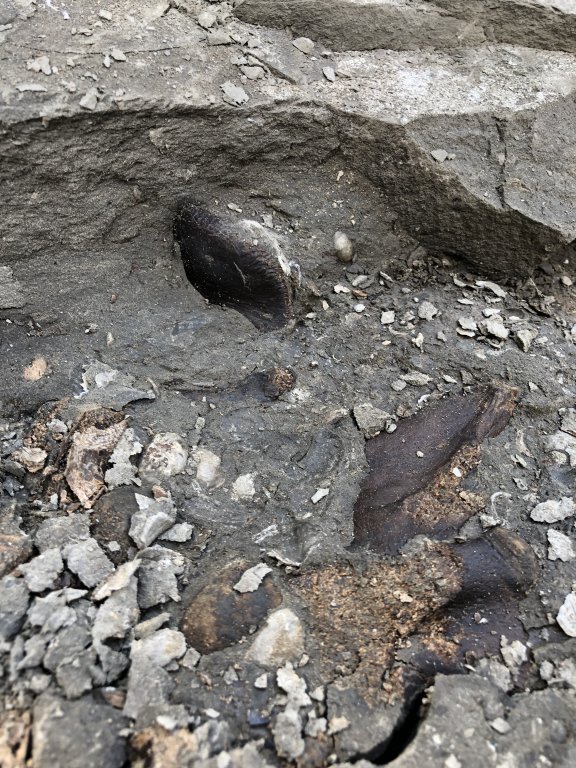 One Walmart run later, and we got to work. The rock quality wasn't great, and crumbled easily. We worked carefully, but soon had to learn to deal with the fact that some bones would break in the condition they were in. Nothing glue couldn't fix later.

(what we saw after the bones had a chance to dry a little, and after some excavation) 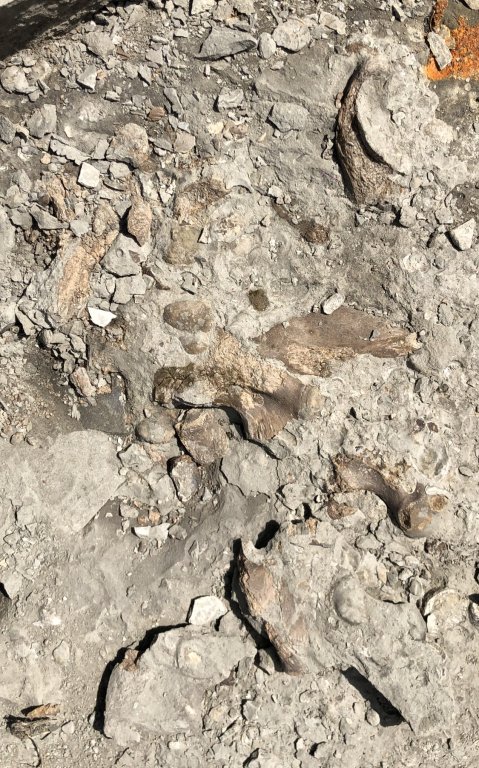 At this point, we had found three associated mosasaur teeth. With the first tooth, I was hesitant to say it was associated, because there were tons of little teeth of all sorts around. A second, much smaller tooth made me reconsider.

(Below, the third associated tooth) 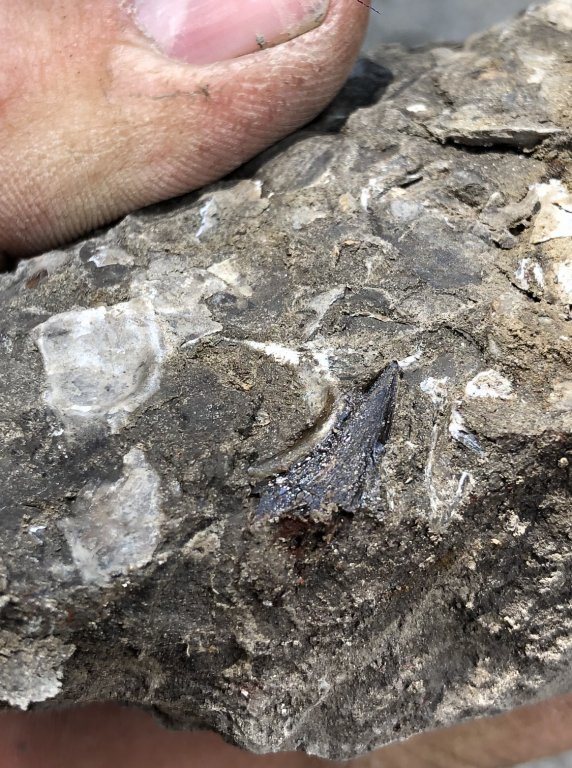 It's worth noting that we found quite a few Squalicorax teeth (maybe 7 or 8), and a  few Scapanorynchus teeth as well - suggesting a scavenging event. What was really bizarre though was the sheer number of little Ptychodus teeth (probably around 6 or 7), many of which were the undescribed species I mentioned earlier. While likely a coincidence, I think it's still fun to imagine this Ptychodus crushing through bone as it scavenged a skeleton - a completely different look on what Ptychodus are supposed to do as shell crushers.

(Some of the shark teeth revealed though the dig) 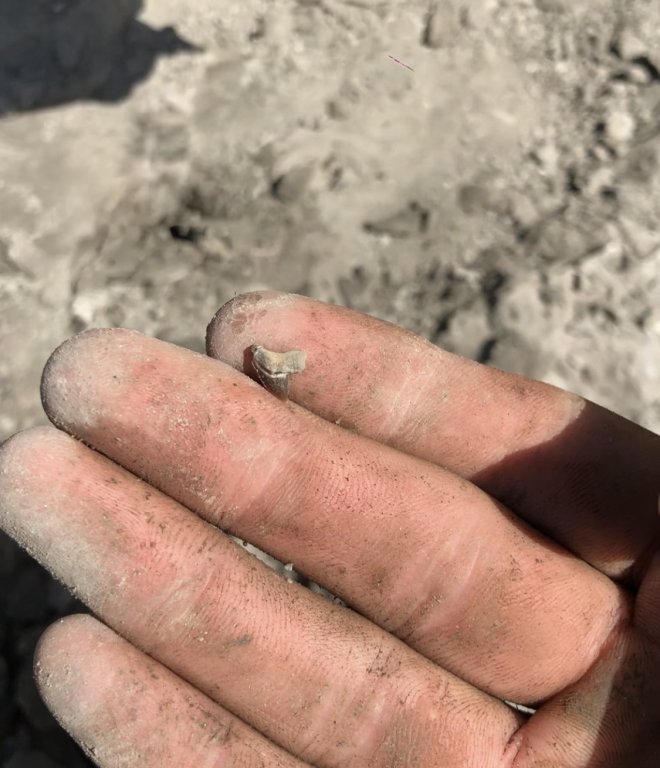 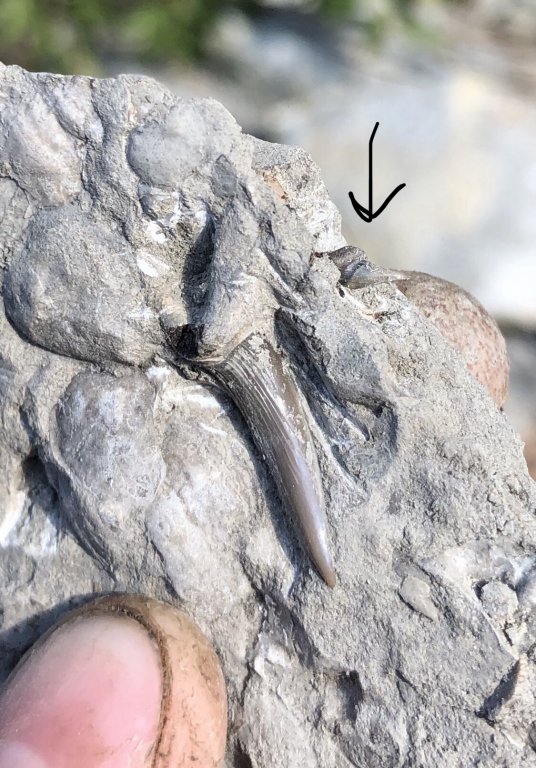 (Smacking a hammer around doesn't always go as planned) 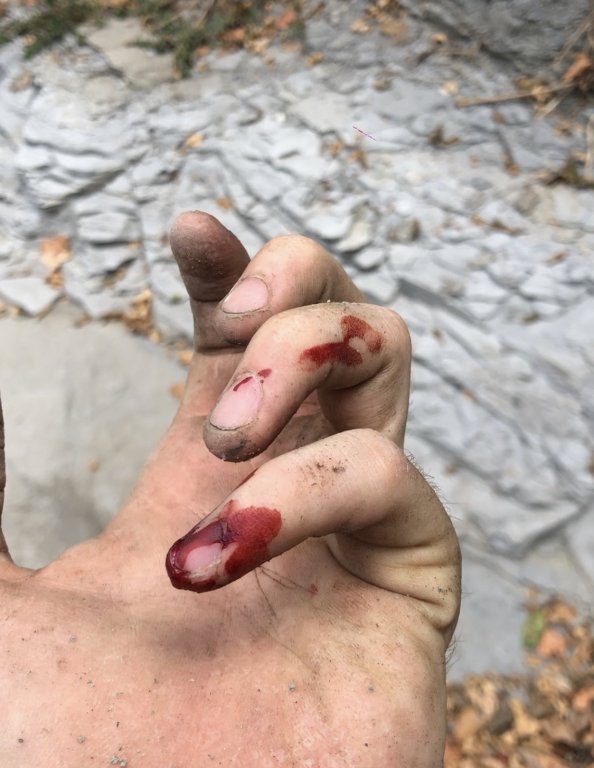 At the end of day one, we had lifted one slab out. It was when we tried to reduce some excess rock at the side of said slab that we found the craziest part yet....a jaw piece! The shaky photos I took of this jaw in the field aren't a great angle, so here's that same jaw piece at home: 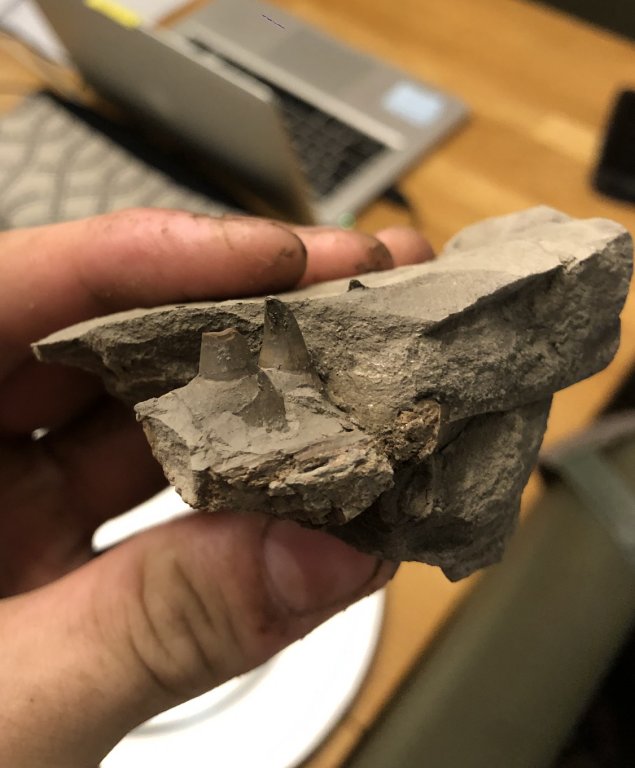 (Below: Christian (left) and I grinding it out in the heat)

Only a little bit of bone remained poking out of the bank after day 1. So, we thought day 2 would go by quickly... but once we started excavating those little pieces, more revealed itself.... 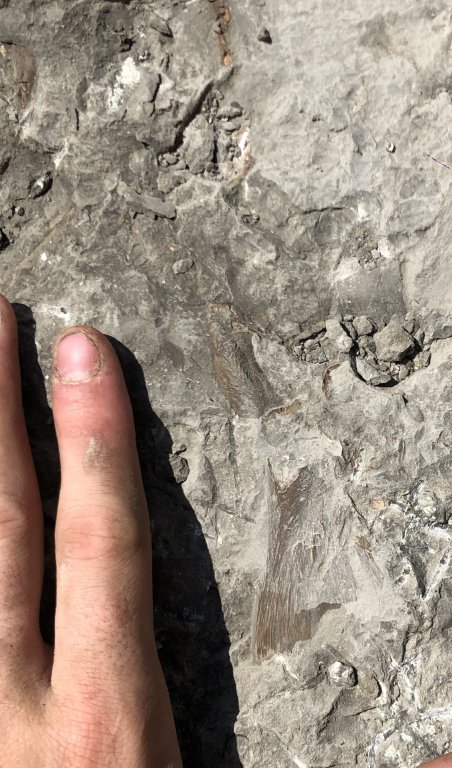 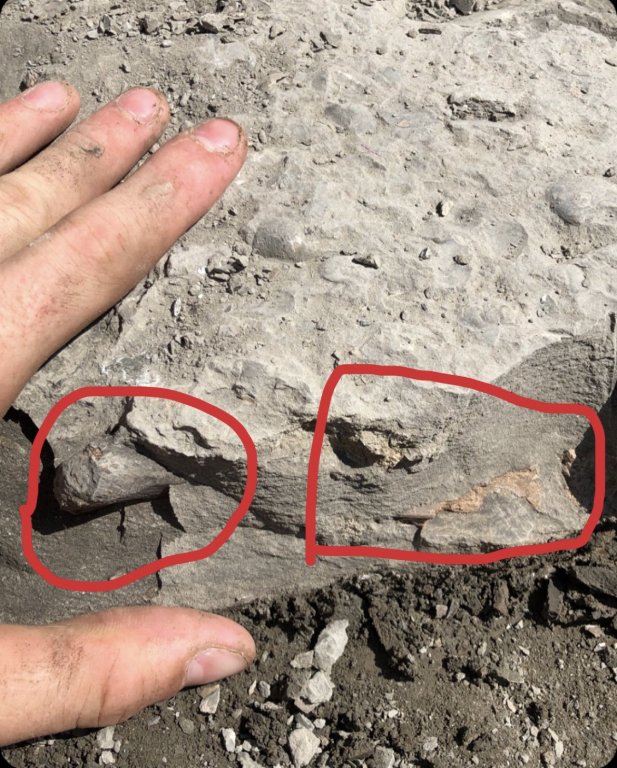 This slab was particularly unstable, and after four hours of careful digging, we decided to rip the band aid off and try to pry it out.Fortunately, instead of coming apart in 20 pieces, it came apart in just 2

(below: One of the two slab pieces) 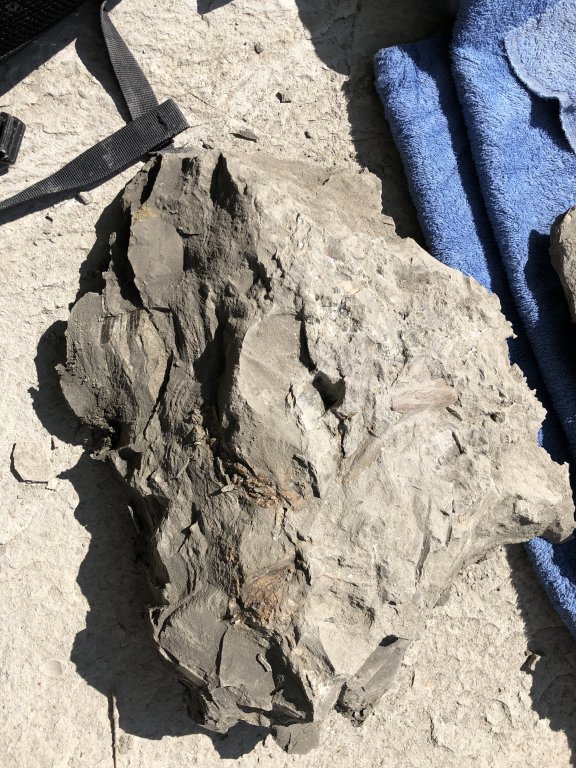 We were done-  9 hours of excavation for what felt like (after the fact) a small amount of bone. However, since so much bone is still deep in the matrix, we're crossing our fingers that we have more than just isolated jaw elements and vertebrae.

Since both of us are new to prep, we decided to leave this intimidating (to us) job to the talents of Kris - @Ptychodus04, who graciously made room for us among his existing prep work. I'm excited to see what his hand reveals, and I'm crossing my fingers that our find has some diagnostic elements.

I'll likely continue to post updates on this thread as they come, but this is basically it! I'd like to write a little more, but unfortunately I have chemistry homework that simply cannot be neglected any longer... It's been understandably hard to think about those trivial things after a weekend like this