I went on this hunt about two weeks ago, but only am getting around to posting it now. It was a great day at a new spot close to my usual stomping grounds.

I was hunting under a bridge the week before when someone walking the path next to it asked if I had any luck - his name was Leo, and we actually recognized each other as both of us have posted about some of our finds on reddit before.

(PS - pardon the picture quality, most of these are screenshots from video)

He invited me to hunt with him at a spot of his on the same creek close by sometime. I was of course quite curious about where that could be, as I thought I've already done some pretty boisterous trekking along this creek before in pursuit of fossils.

Since he immigrated a couple years ago, he passed time walking his dog along this creek, and discovered there were fossils around that way. After training his eye a bit more than a year and half (about twice as long as me!) he's practically mastered this stretch of creek, and he's yielded a few fantastic spots. We shared some spots in common, but those that I didn't know about far exceeded my expectations for this creek.

We chose a cool weekend, a week after a strong storm. I didn't film or take any pictures until about an hour in, but there were a couple small cretaceous teeth, and a nice quality bison tooth. All his finds.

After an hour or so, I was finally getting into the rhythm of things. It usually takes an hour or so for me to break into a new spot, and to start spotting things. My first real find set the tone for the rest of the day:

Here it is insitu: 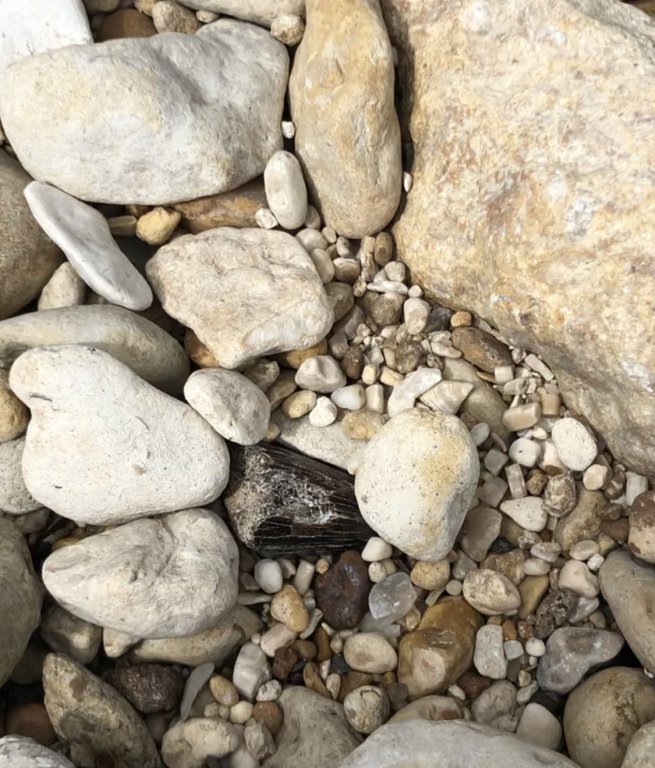 And once I pulled it out: 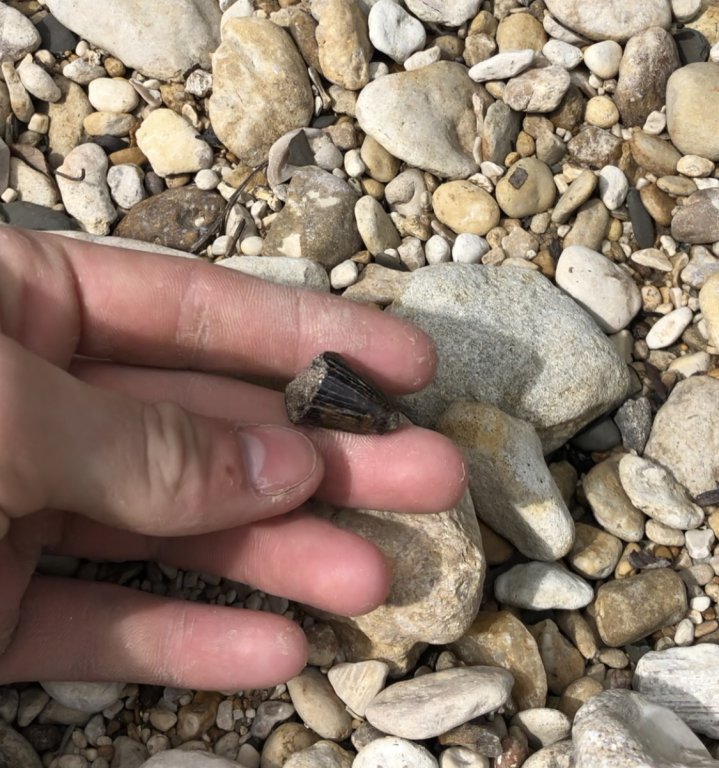 This was my second Mosasaur tooth (likely Tylosaur) from the Ozan around here. My other one is larger, and better preserved, but this nonetheless had both of us blowing our tops off with excitement. About 5 seconds after picking this up, Leo picked up another tooth, this time Scapanorynchus, sitting 10 inches away. It's an epic memory 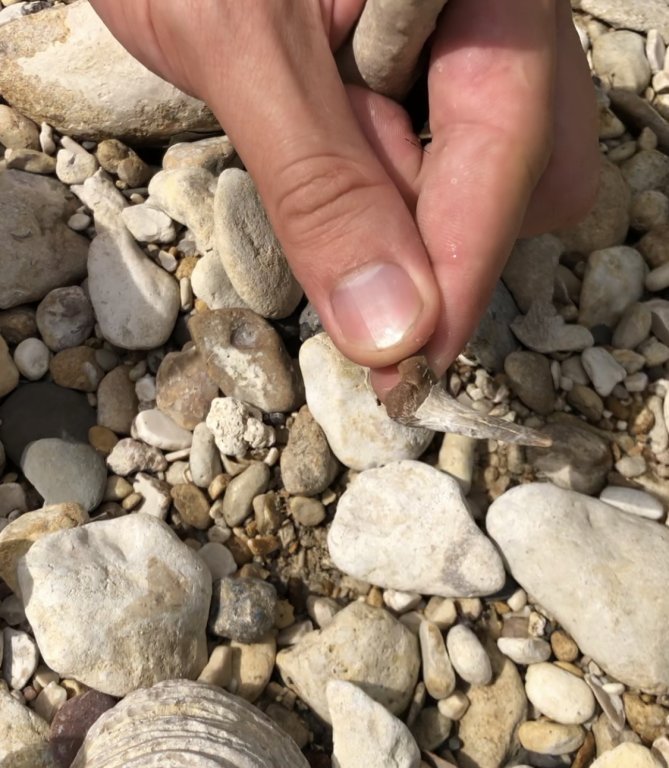 On the same gravel bed, Leo then found our target for the day. He showed me some of the Ptychodus specimens he's found at this spot - all large, perfectly preserved, and from several different species. I was really crossing my fingers for one of equal stature this day. Leo, maybe about 10 minutes after our mosasaur meltdown, then pulls this beauty out of the gravel: 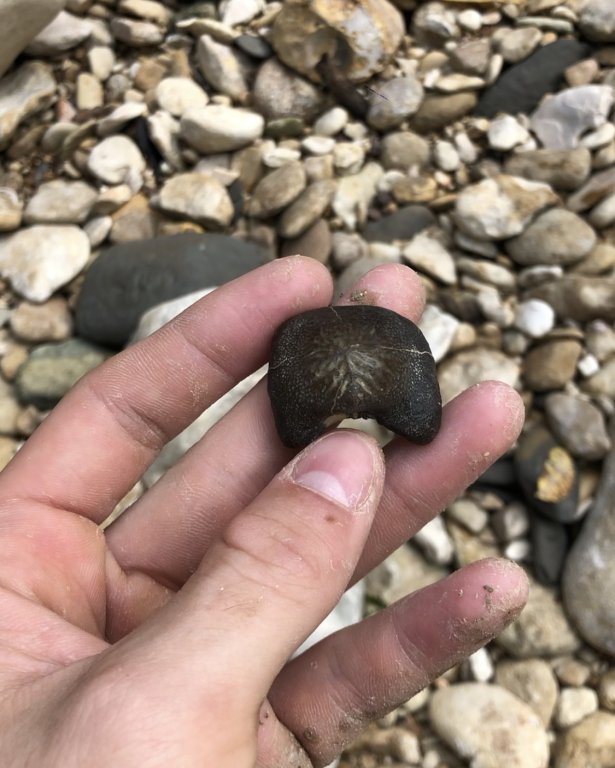 It's a little more worn than his others, and this one is much darker, but still great quality and HUGE in my eyes. I know Ptychodus mortoni can sometimes get substantially larger, but this is by far still the best tooth I've ever laid eyes on. It's also in better condition than this screenshot implies.

The air was electric now - the energy for at least two hours afterwards was full throttle, as we both were expecting to turn our head any minute and make the next great find. Here are some highlights 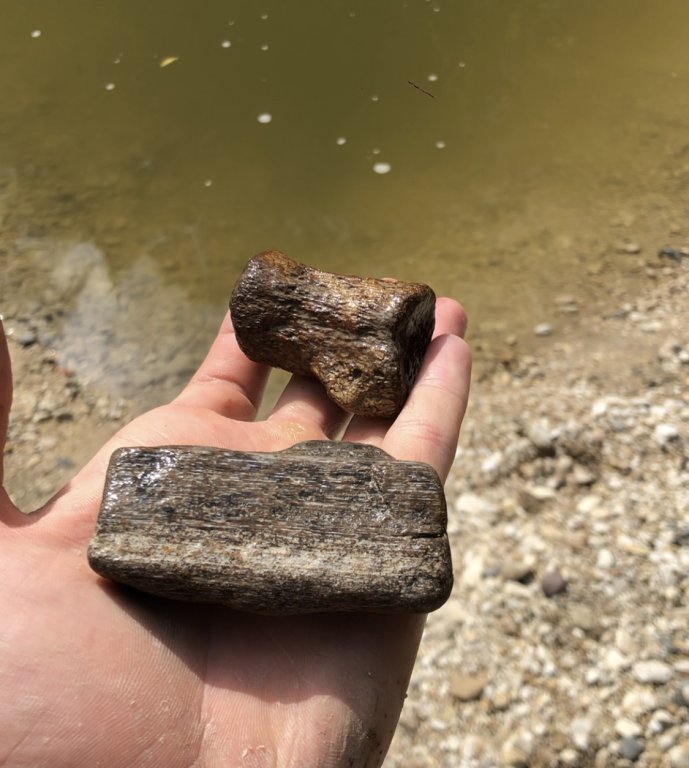 (chunkasaur piece from me, the great Mosy vert from Leo) 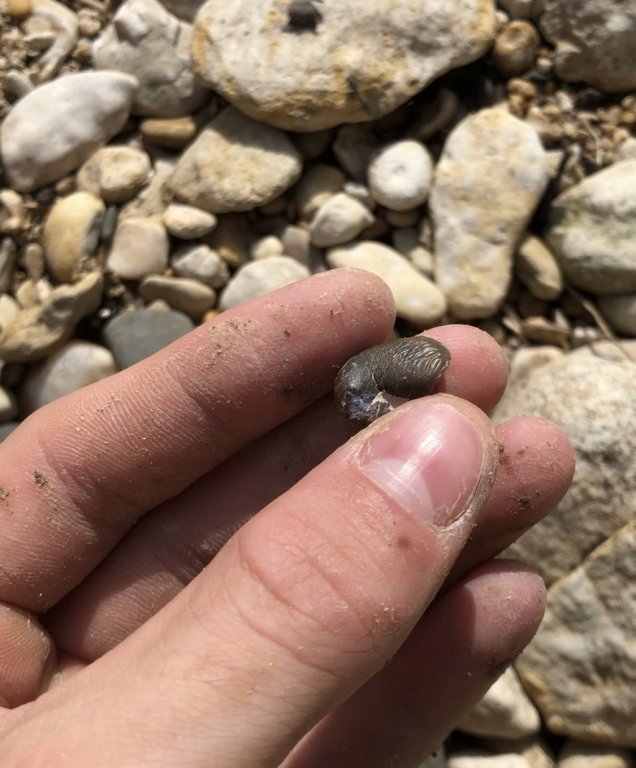 (Piece of what would've been a great Ptychodus from me) 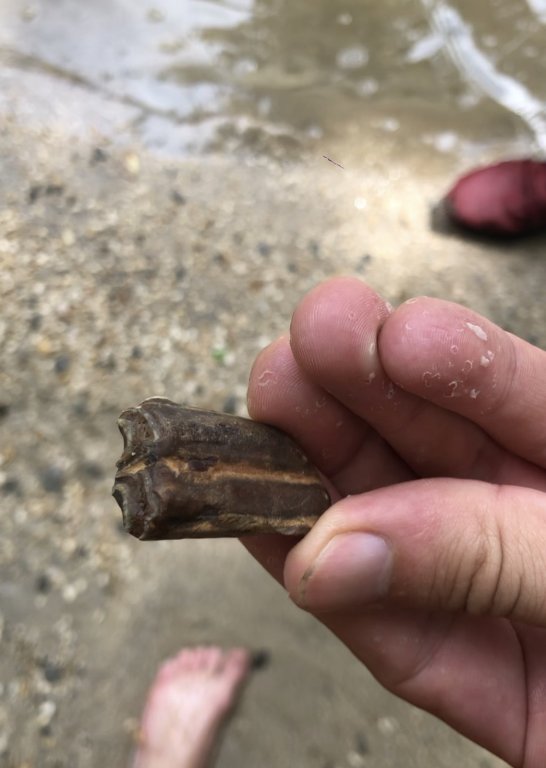 (Great Bison tooth from Leo - I have NEVER managed to find a completely black bison tooth from this area. I've found maybe 10 or 11, all at various stages of preservation, but never a fully fossilized (black or orange) tooth. Quite jealous! These seem to be casual finds for Leo!) 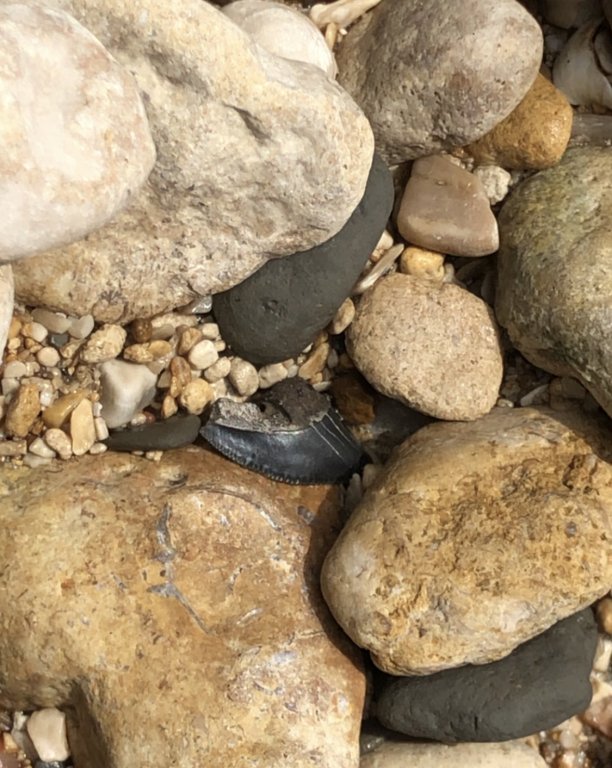 (Squalicorax hiding in the gravel from me) 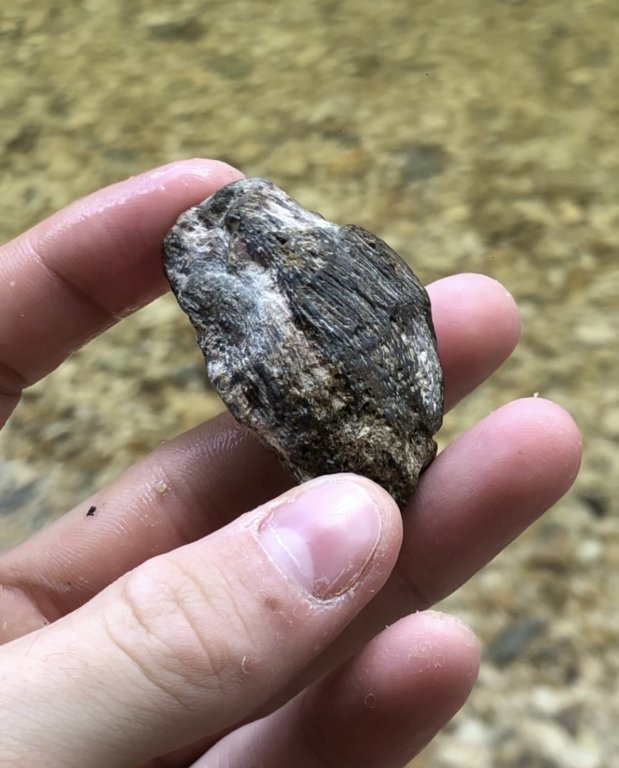 (Some chunks like this are strangely reminiscent of wood, rather than bone... could this be petrified driftwood?) 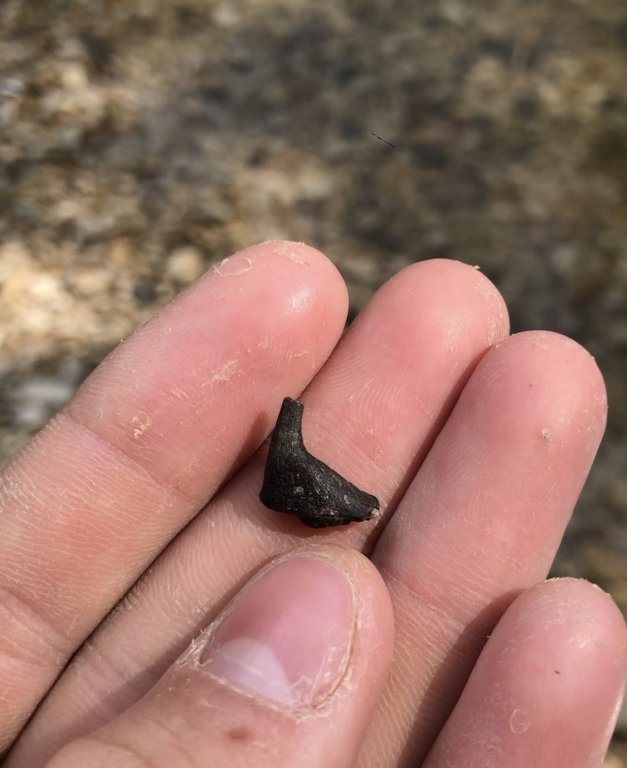 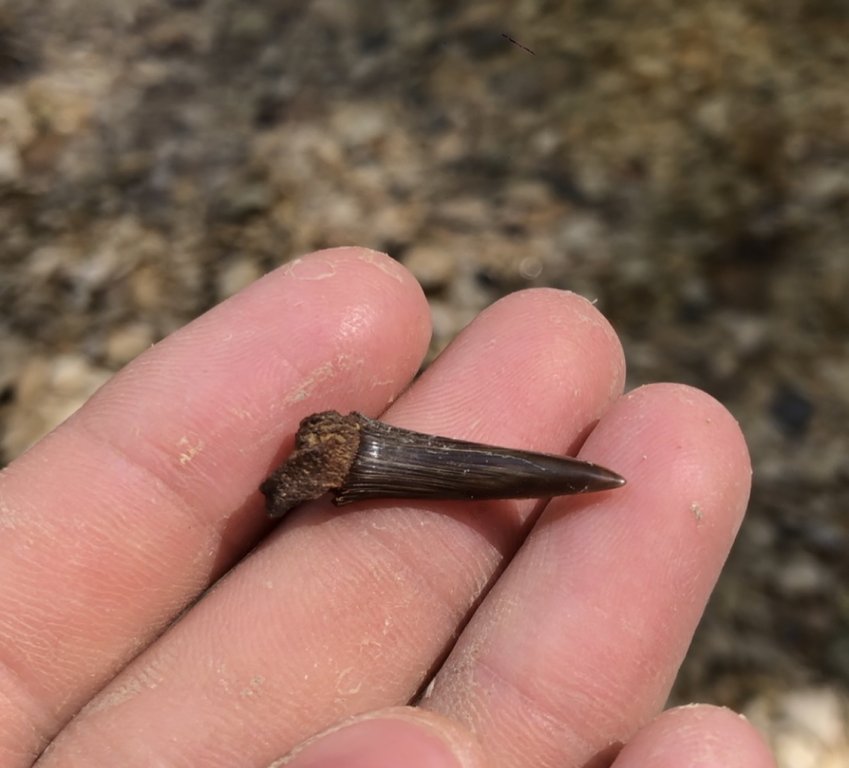 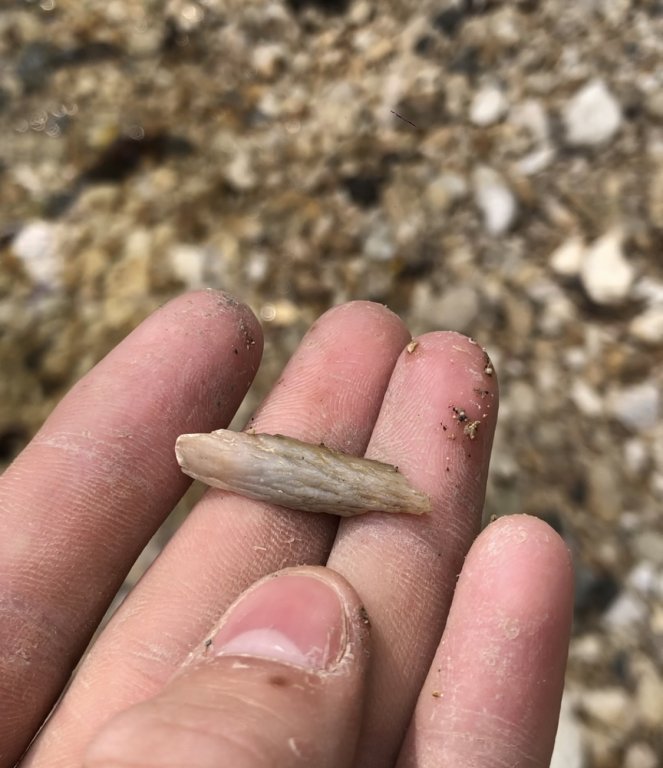 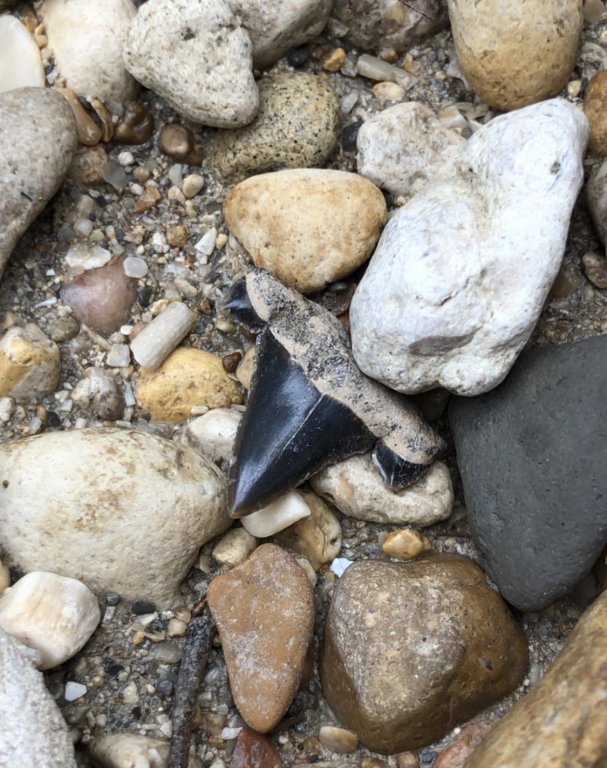 (Cretolamna (I think) sitting in the gravel, from me - I'll gladly be corrected if I'm wrong)

Then, Leo made the next great find. If we were fired up before, NOW we were in another dimension... two big mosasaur teeth in 40 minutes!?? This was nuts! 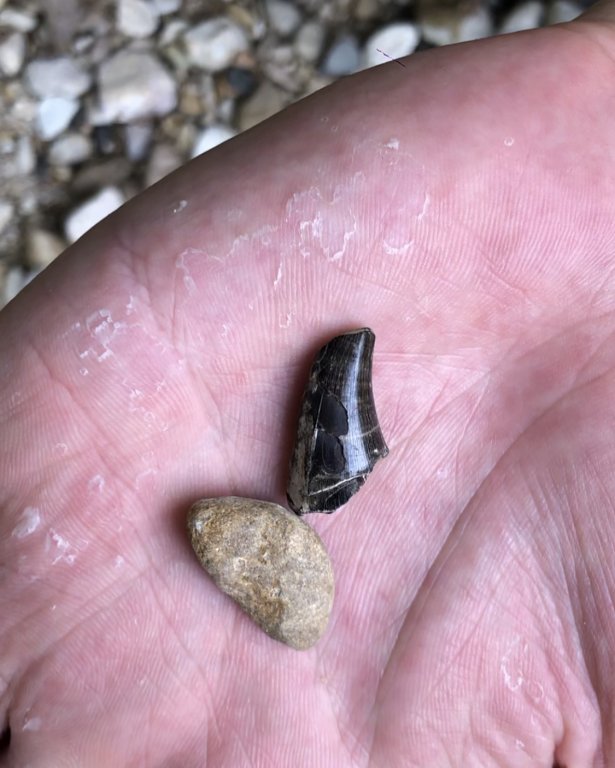 We moved maybe 20 more meters up again - this was all still on the same bend of the creek. Leo was hoping for arrowheads this whole time - me not as much - before this day they didn't really interest me... but all it took was one good find. Here was my first point of the day, and my second point ever - first insitu and then in hand. 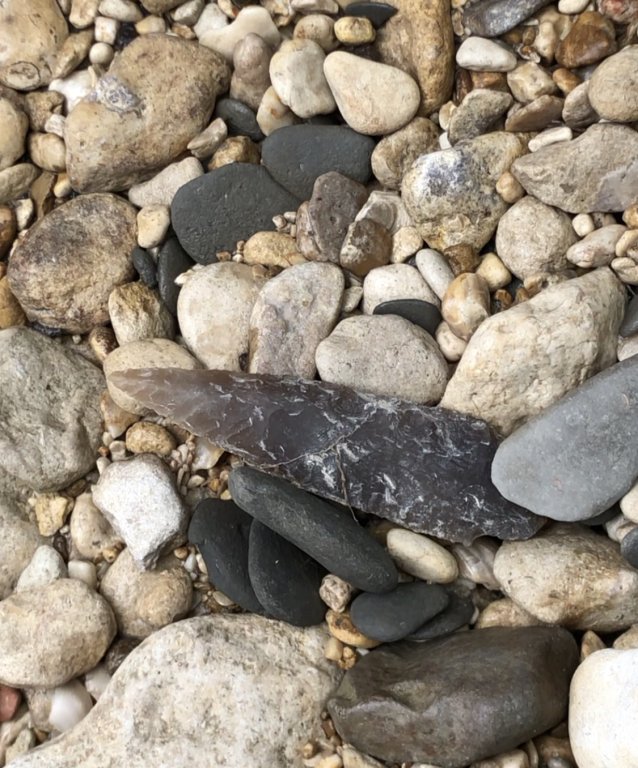 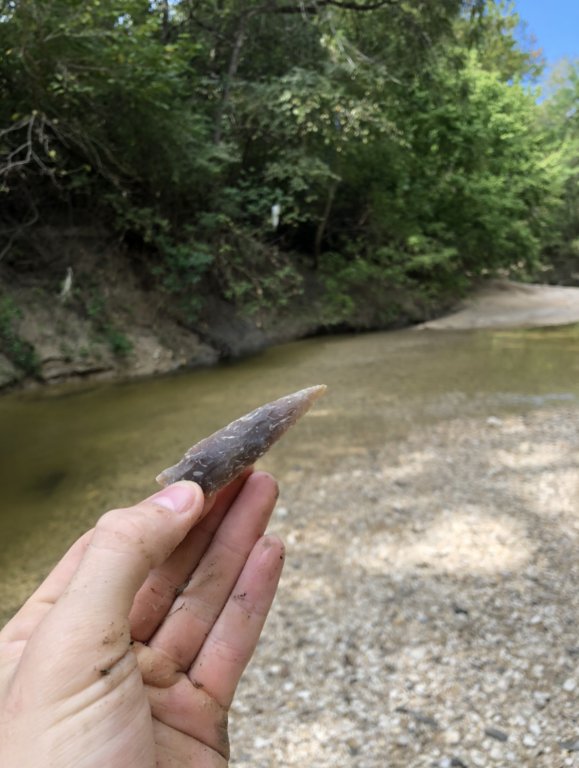 A few meters away, Leo found this rib with strong signs of preservation, but not fossilized yet - 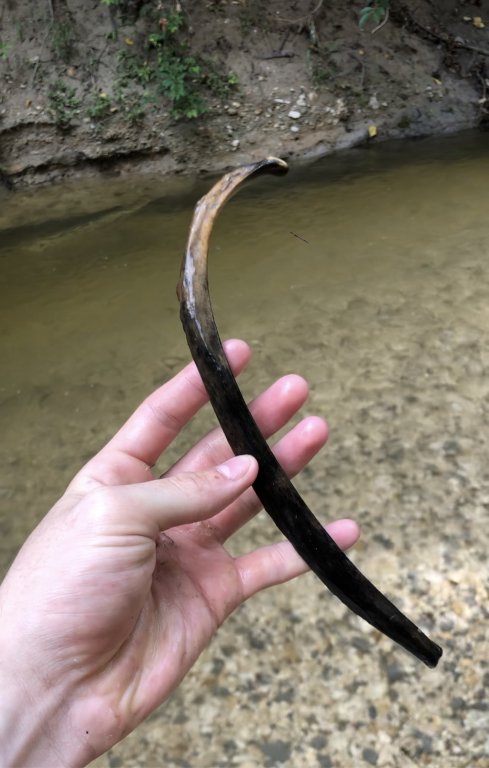 It was quite late in the afternoon, and Leo still wanted to get me to a big exposure he thought I'd like. On the way there, we chatted, with me learning a bit about points while he learned a bit about fossils. We finally made it to a grandiose exposure - the tallest one of it's nature I've ever seen. Dark clays and shales filled the bottom half, and I'm sure this was where many of the fossils we found were washing down from. Ironically enough, it was not Cretaceous stuff that stood out here . 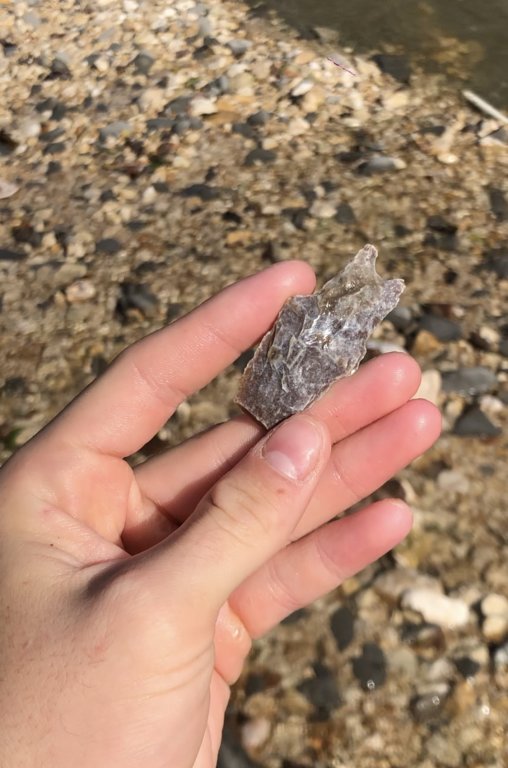 Close by, there was a large bone half buried in the gravel - I think it's the lower leg bone of a bison, that would be below the knee: 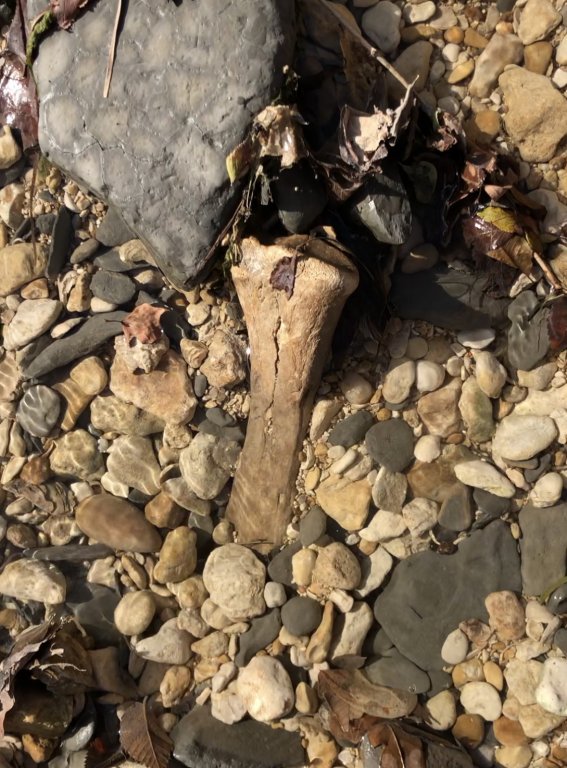 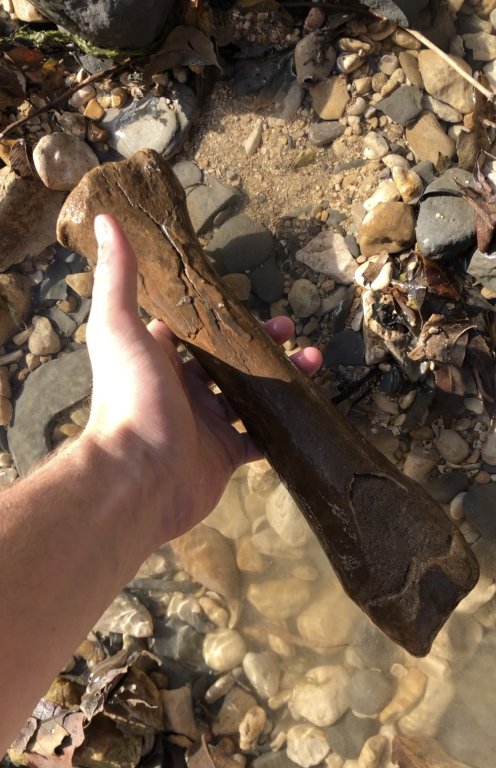 And last but not least, some other finds we made heading back before the sun went down. One of the bison teeth I found, with phosphate starting to leech in the cracks of enamel to begin the fossilization process, the top of a point that Leo found, and a completely bizarre deep red piece of mammal enamel (I assume Bison). The picture doesn't do it justice - it's deeply blood red. 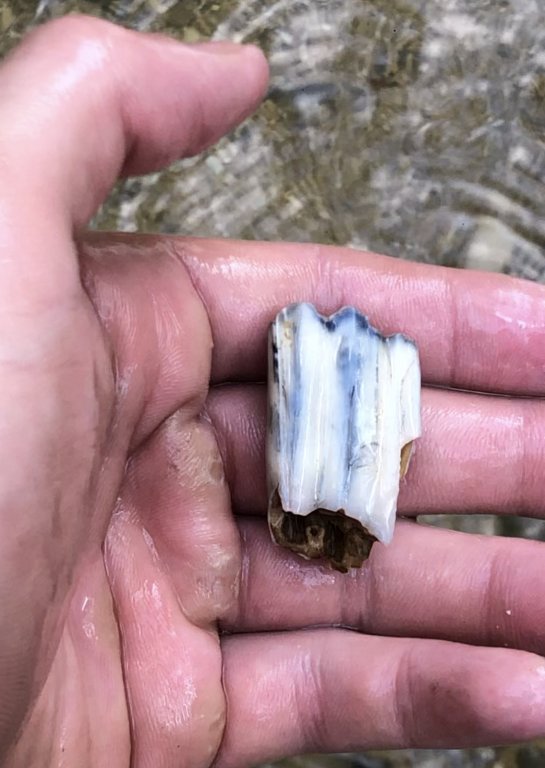 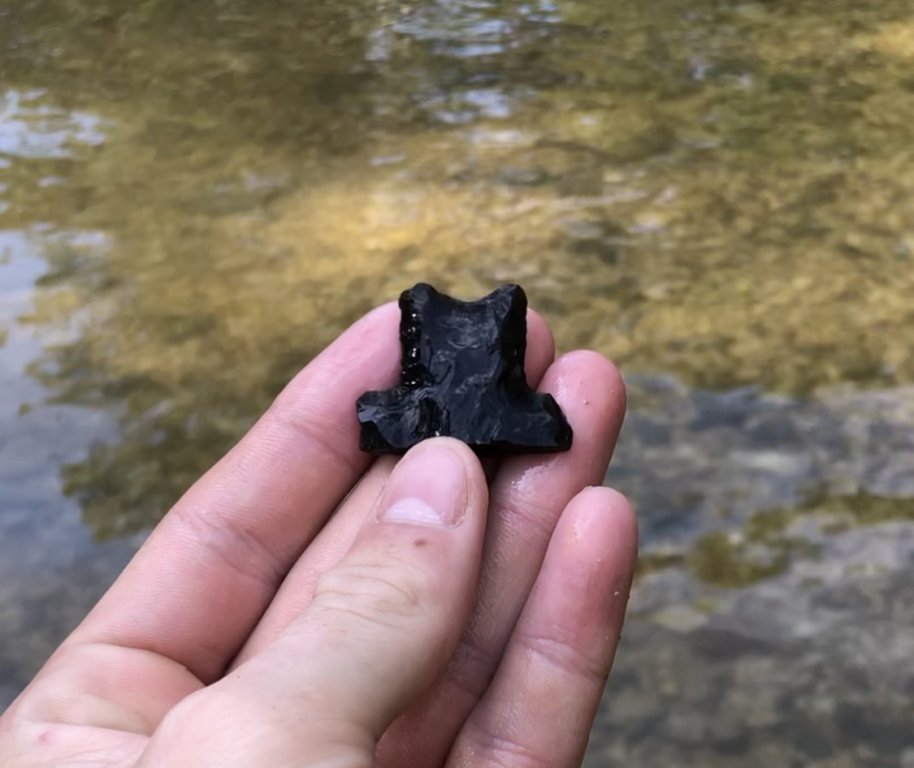 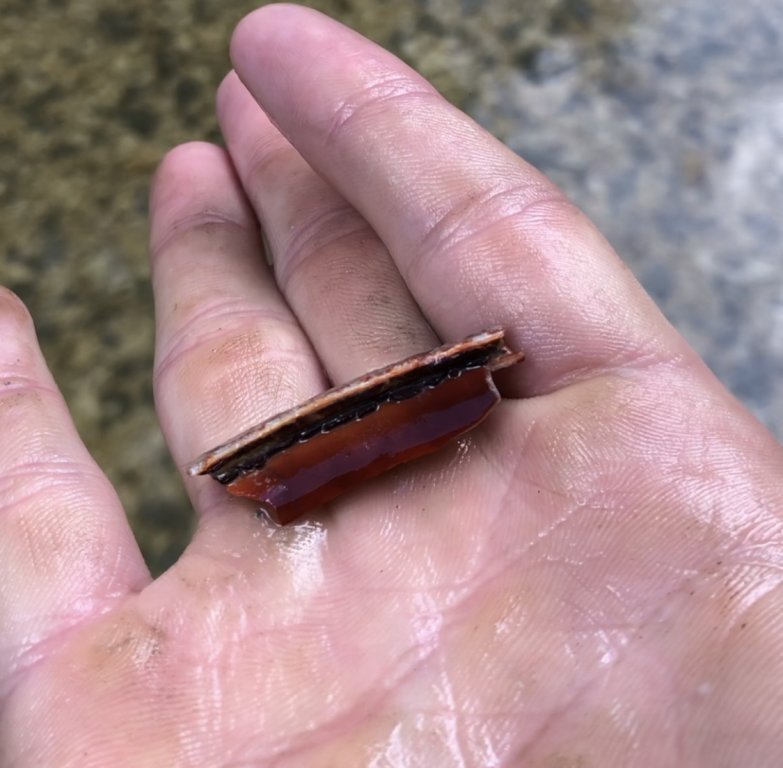 It was a great day, and I'm grateful to Leo for showing me around his hunting grounds. Can't wait to see what last nights storm will do for this place!