Recently I've been researching a late cretaceous texas shark that I've never even heard of until two nights ago. I'm already a bit of a night owl (as you might see by the timestamp, I'm writing this well past midnight already

), but these last two nights spent researching and investigating potential spots have been LATE ones, around 3 AM - I guess I've really been bitten by the bug here.

The shark in question is Pseudomegachasma, specifically Pseudomegachasma comanchensis (for my area). It's thought to be a roughly 15-20 foot filter feeder, related to sand tiger sharks of all things (family Odontaspididae), and its small teeth bear an extreme (yet superficial) resemblance to those of the modern Megamouth shark, Megachasma. Pseudomegachasma was only described in 2015. Its teeth are very rare, but specimens existed already for years - it was simply assumed that they were beaten up specimens of a related shark, Johnlongia (which I also never heard of until lately).

What really excited me was finding that a tooth used in the paper came from Eagle Ford strata (Bouldin Flags member, specifically) in Williamson county, of all places. I actually obtained coordinates eventually, but those coordinates were only specific to two decimal places, and so not as useful as I hoped. There used to be a massive Eagle Ford bonanza in Round Rock (just north of austin), but it was covered up by construction... so was hope lost?

I actually knew of one permanent, super isolated exposure of what I'm 95% sure is Eagle Ford, in Williamson county. Furthermore, those vague , blanket coordinates made reasonable sense with this exposure. So now, my mission was to investigate this exposure in a new light, looking for both the tiny (8 mm ) teeth of Pseudomegachasma and also for ammonites for their use as index fossils, to determine if I'm really in the late Cenomanian/early Turonian Bouldin Flags member like I'd need to be.

Today was absolutely frigid (for texas standards at least), and way too cold for creek stomping. Nonetheless, I donned many layers and threw on my sandals. Walking through the water was quite painful - probably not a big deal up north, but here that's an uncommon experience. After a stretch of sharp inhales and curses, I finally waded out onto my first gravel bank. It produced a small Ptychodus tooth - I still need to look closely at it to try and pry a more specific ID. 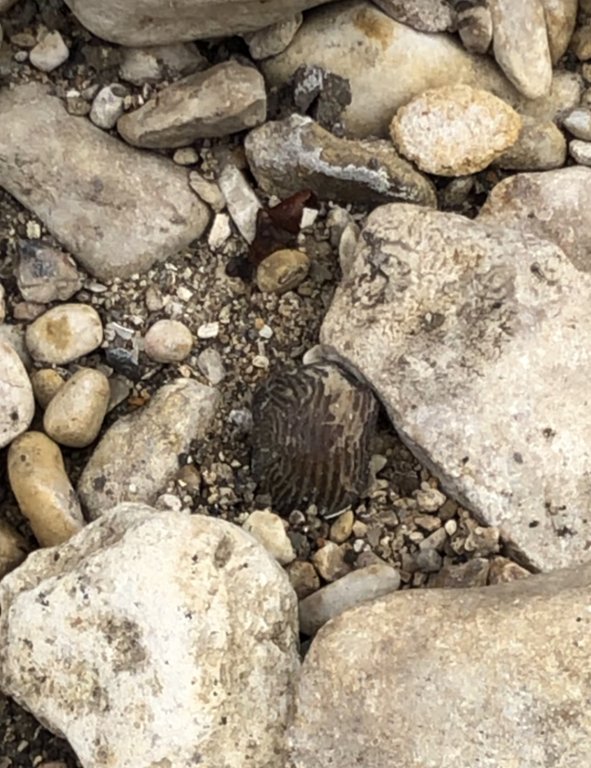 Soon after, on the next bank, I noticed a bovid tooth. Upon closer inspection, it turned out to be bison, much to my surprise. All of the many bison teeth I've seen from central texas came from one specific creek - this was my first time seeing one elsewhere in the area. 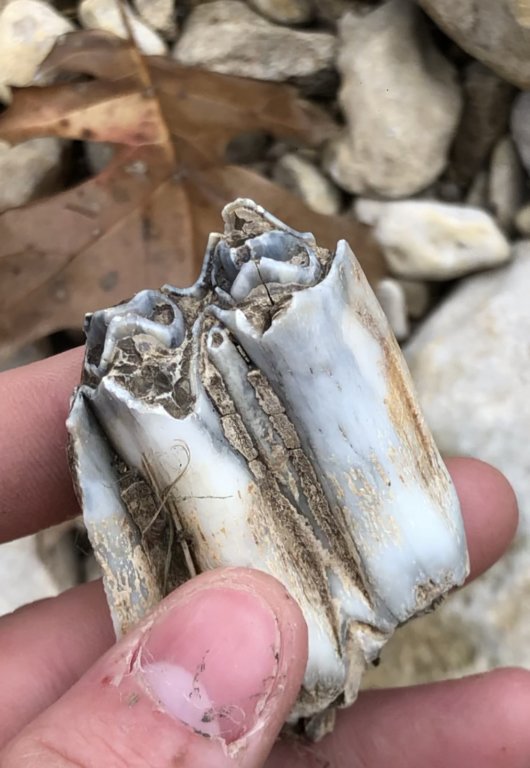 I also saw two more shark teeth soon after - a small Cretoxyrhina mantelli and what *may* be Ptychodus anonymous, I'll take a closer look at it as well soon. 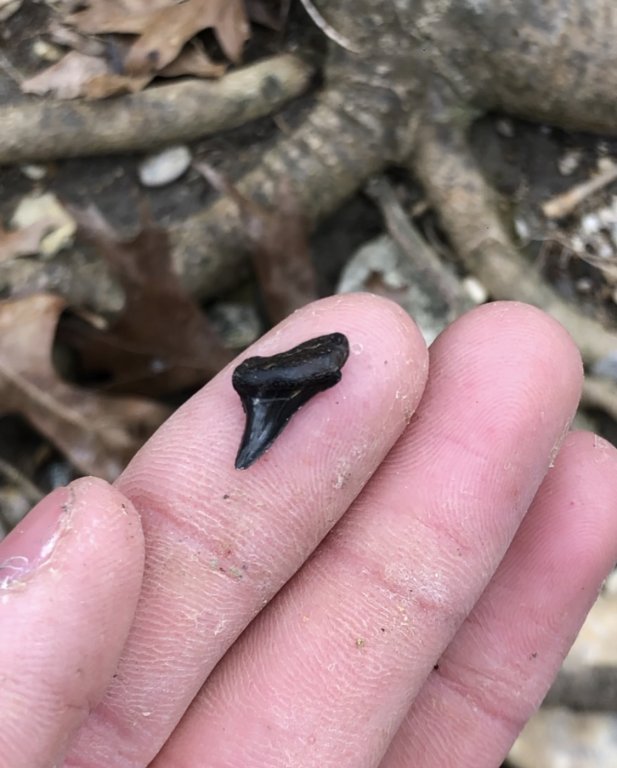 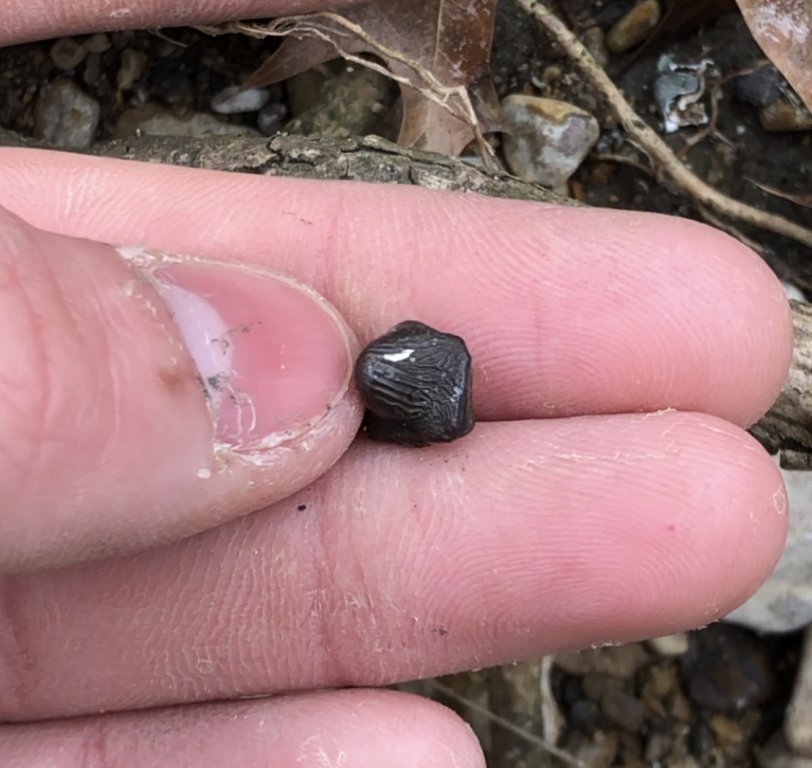 The cold was starting to weigh down on me, and I had work coming up soon, but then I thankfully a caught a break with at least one of my goals - finding an ammonite, washed out from the stumpy exposure, to make use of as an index fossil. My ammonite ID skills are among the worst on the forum I'm sure, so I'll be putting it up on fossil ID shortly. My hope is that this partial and impression will be enough. 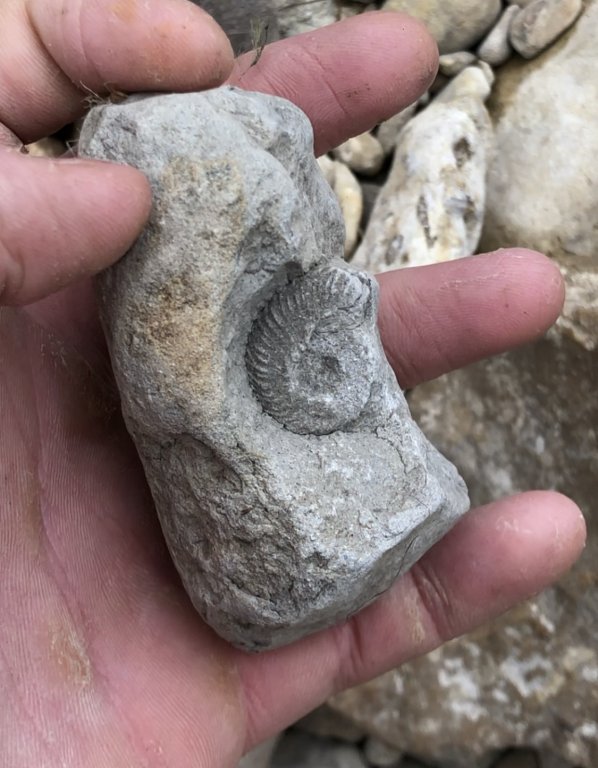 This was the last of my finds of note today. If this exposure is indeed bouldin flags, I will be back with a microfossil vengeance.

Oh - and just to put into perspective how absurdly inappropriate my outfit was for wading in this weather today: 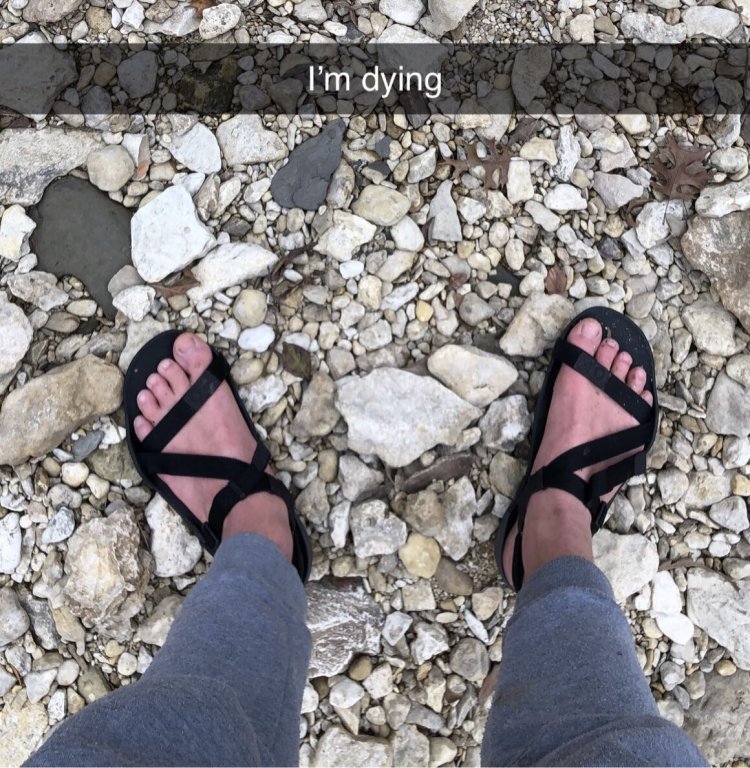 The three layers and beanie couldn't compensate... well worth it though.