I have been experiencing the most unusual predicament for over a month now - I've been finding more artifacts than I have my target fossils. I happen to live in one of the most prolific areas in the U.S. for impressive paleoindian and other native artifacts, and while I certainly have an appreciation for these, it's like "giving pearls to swine" - since my first interest right now is firmly cretaceous vertebrates.

However, I am still regularly blown away by some of these artifacts, even though I don't know much about them. So, purists be warned! This trip report is yet another one where artifacts are a regular feature

While some people my age use social media to doom scroll or burn time, I use it to fuel unrealistic day dreams of huge Cretoxyrhina teeth.

A north texas fossil hunter I follow on Instagram recently posted a broken 2.5" Cretoxyrhina tooth they found, and I couldn't stop thinking about it. Furthermore, while stuck at home with a cold I caught from the impulsive, freezing creek stomping excursion I took recently, I organized part of my collection and realized that ALL of the 5 non-ptychodus shark teeth I've found at my local Eagle Ford outcrop are Cretoxyrhina mantelli - even my biggest, which I assumed from one glance in the field to be a broken Scapanorynchus raphiodon, due to the super curved root. With my largest tooth being just 1.1 inches (albeit with a broken tip), I figured I could only go up from there.

So, Saturday afternoon, after a morning spent rock climbing with a friend, I swung by my new local spot. I found one, tiny beat up blade walking up, not id'able to any species. At my turn around point though, I looked down and saw this: 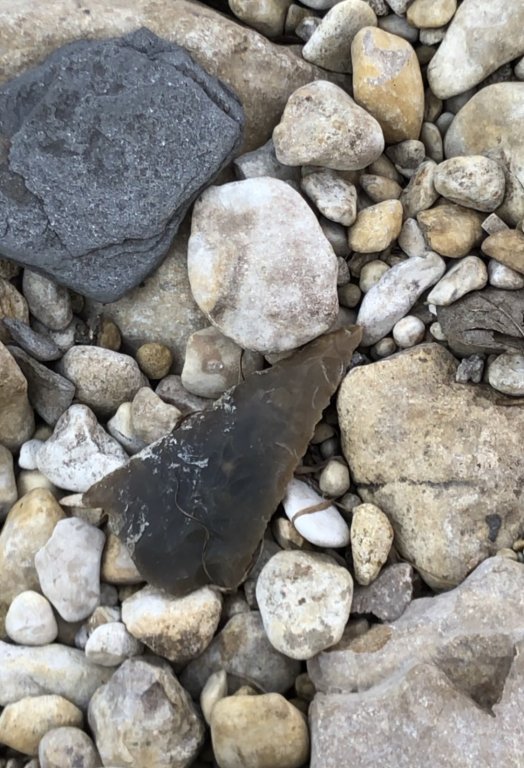 Here it is in hand: 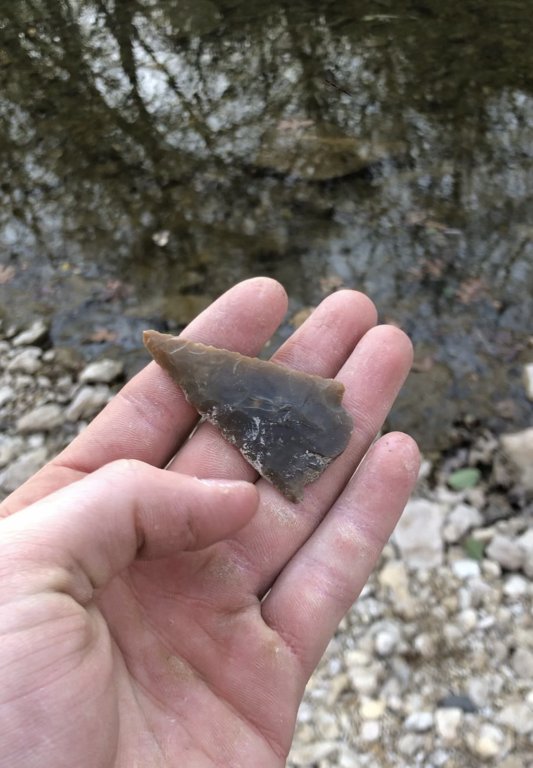 Again - I don't know anything about points, but I think this Atlatl point is a "Bulverde", and so 3,500-5,000 years old. More experienced locals like @JohnJ might think differently though.

Twenty minutes after seeing this, I hopped to a bank and froze dead in my tracks - sticking out of the side of the bank, I saw THIS: 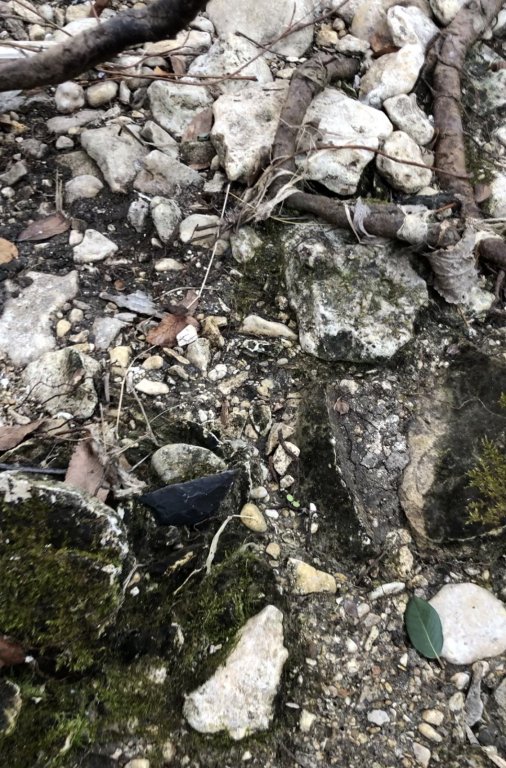 ...and a closer insitu below: 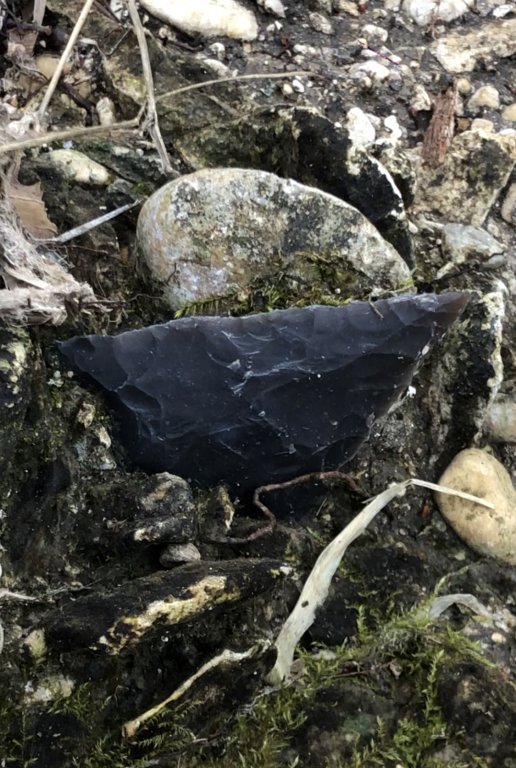 After taking a descriptive video of the area, so that I can be sure I won't forget, and inspecting the immediate surrounding for the usual evidence of a camp (charcoal, snail shells, flint flakes, bone, other points, etc..) I gently used my pick to pry it loose. Strangely enough, the exposed portion was the part in the best shape. I suspect it's also a Bulverde 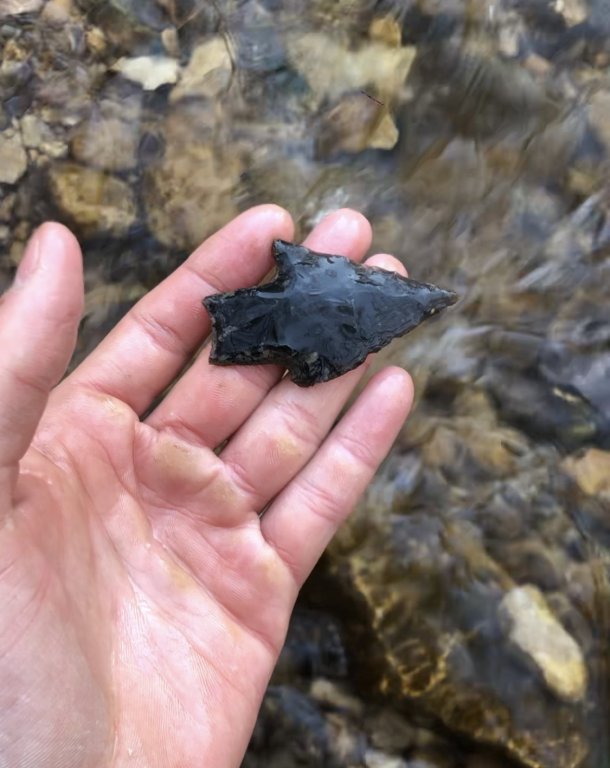 While I was very pleased an impressed with these, I still walked home without my target. The interesting consolation prizes made it well worth the effort though.

Fast forward a day (to today).

My older step brother, Christian, has recently picked up an interest in flint knapping, and he's become very good at it in this short time. It stems from his interests in the local artifacts we've found, and while he's not of the personality to specialize, his focus right now is  understanding the local archaeology.

We decided then, to kill three birds with one stone today by a trip to my usual middle campanian stomping grounds a little further south today. This creek in particular is probably better known for points, but it has great cretaceous exposures, satisfying both our interests. Thirdly, it has nodules of quality flint, to be collected for flint knapping.

The plan was to shoot relatively quickly to a massively tall cretaceous exposure that seems to yield everything except cretaceous fossils. In the creek below this exposure, I usually see artifacts and Bison teeth. For example, it was right here that my friend who I was introducing to hunting found that large "Friday Bi-face".

It was slow business on the way up. Most of the way up, we saw several sets of footprints ahead of us, and by their movement pattern, it seemed they were hunters. However, when sitting down, I by complete luck noticed a great, thin point next to my backpack: 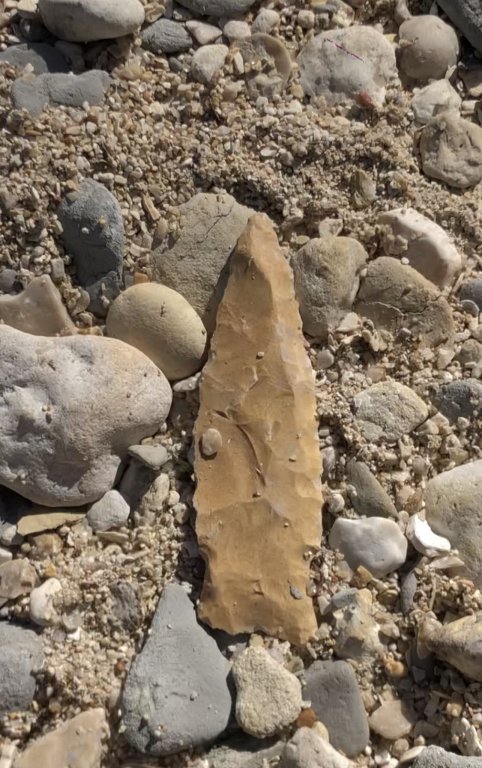 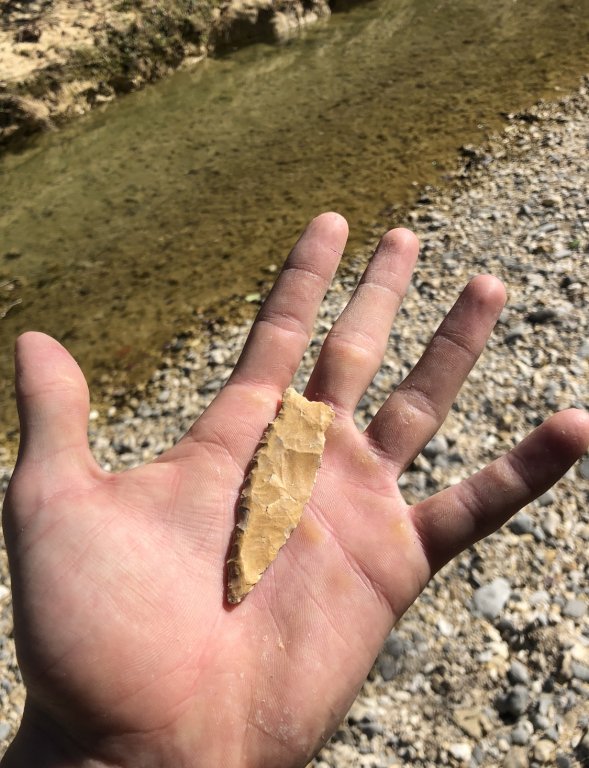 (EDIT: I believe this is a "Hoxie" point, and therefore my oldest artifact find. A google search revealed that it would be between 6,000 and 8,500 years old)

20 minutes after this find, we finally made it to the huge exposure. Maybe it's from child hood habits of growing up together, but we were both hit with an impulse to climb to the top. Perhaps it would not be so impressive in a purely aesthetic sense, but the fossil hunter in me thought it was the most beautiful thing I've ever seen. 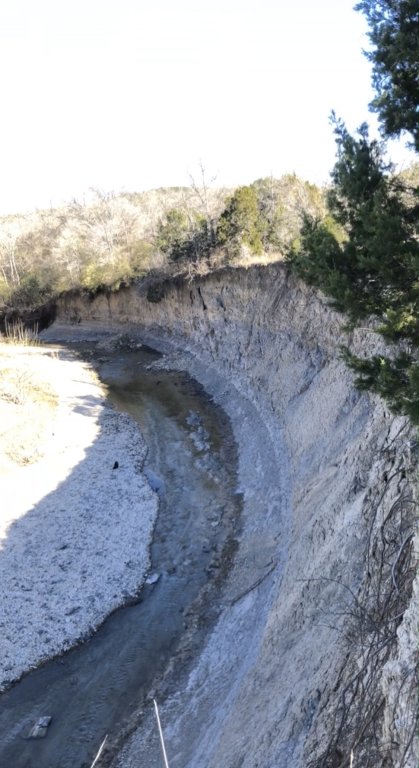 From up high, we noticed that some parts of this exposure may be just protruding enough to stand on. What a difficult adventure that ended up being...

We carefully descended to the upper third of the exposure, looking at yellow layers, that, much to our surprise, ended up  being cretaceous - I'd always assumed that the grey shale at the bottom was the extent of the cretaceous strata on this cliff, and that the yellow strata above it was Pleistocene or Holocene.

It was still super difficult keeping our feet even in the more "stable" parts. The ground was soft, steep, and easily collapsed. It felt awesome balancing on that stuff while scanning side of the cliff for marine fossils though.

(Christian, below, on a more stable patch) 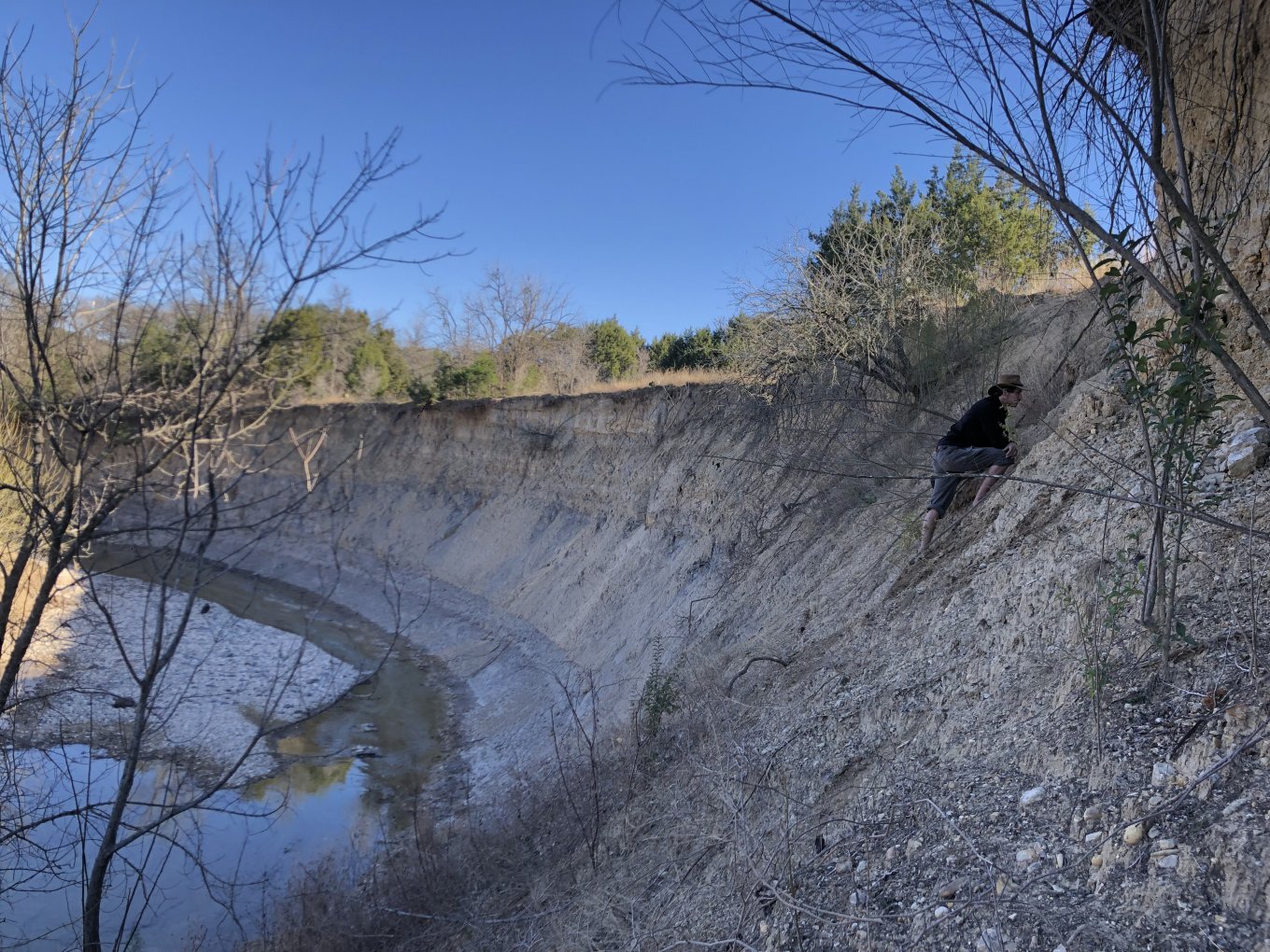 (pointing to the patch we stayed on) 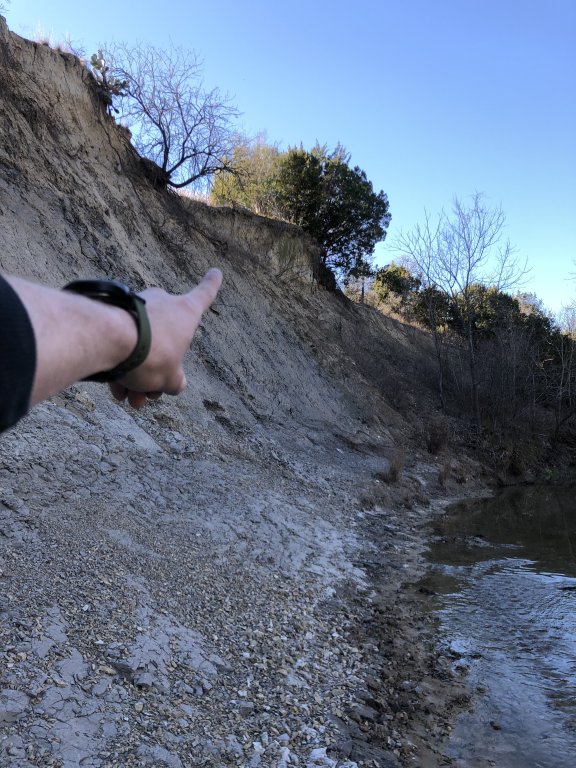 We were mostly messing around here until Christian yelled "tooth!". I almost became past tense from moving way too quickly on that soft soil to get to him, but when I finally made it over, I saw perhaps the best Squalicorax tooth I've ever seen. We spent the rest of our time there - half trying not to teeter over, half looking for fossils, and Christian noticed another small Scapanorynchus blade. The irony that I was the only one finding projectile points while he was the only one finding fossils was immense.

Squalicorax, not quite insitu- it was shifted a millimetre or two here. 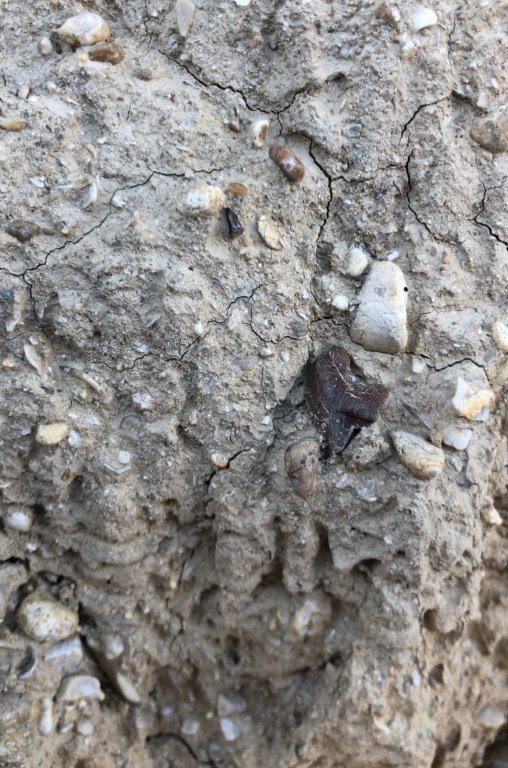 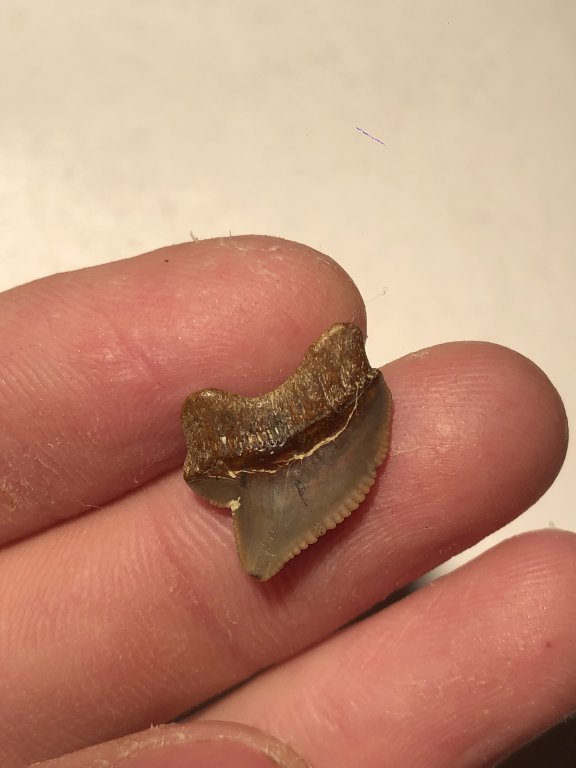 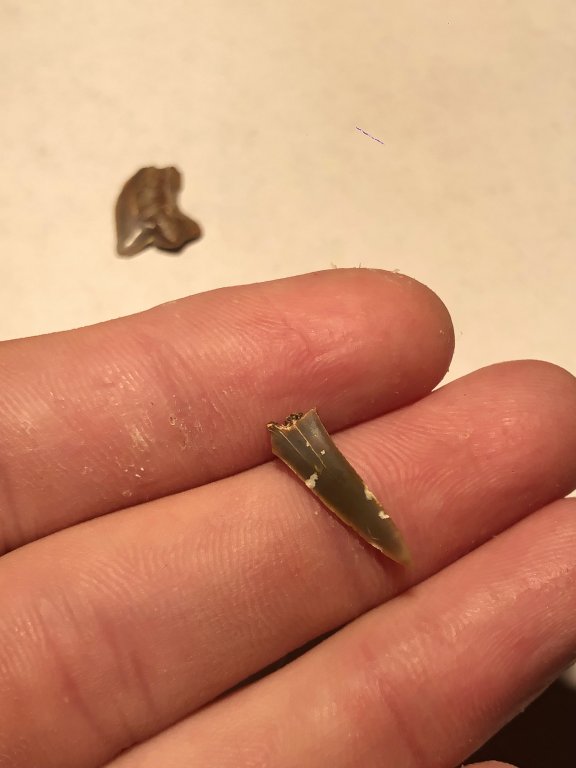