Spring in my stretch of Texas is brilliantly green, with lush, heavy foliage that reaches tall. The atmosphere is warm, with humid air that has weight of its own, and the open, bright blue skies are occasionally interrupted by fleeting storms.

This season of sticky air and vibrant greenery have made me deeply nostalgic for when I was just starting to figure things out and really exert myself in the practice of fossil finding, just a year ago. I spent steamy days romping up and down isolated creeks, armed with just persistence and very little knowledge, making some of my most memorable first finds.

Little has changed. I'm still a beginner in most respects, and It's only been a year yet I'm making it sound like it was a lifetime ago, lol. However, I still can't help but be proud of how far I've come in this short time, and with this weather I've been reminiscing about those beginnings (which I'm happy to say I'm still experiencing - I hope one day to look back at the solo adventures I'm doing now with the same fondness.)

Friday I decided to re-live the feeling and visit a spot I hold great memories of. Last May, before I even found my first central texas shark tooth, I stumbled on a mosasaur tooth in a gravel bank here. It was my first "big" find, and I came back with a similar goal.

The conditions were the same as that day in may, nearly a year ago. Steamy and green. I even put on my fishing shirt, out of tradition. Stomping the creek I had "Lady fingers" by Herb Alpert & The Tijuana Brass repeating in my head.

Here were the keeper finds I made, in order, below.

Nifty irregular echinoid, I'll be looking in Morgan's book on Texas echinoids, which recently arrived in the mail, for the ID here. 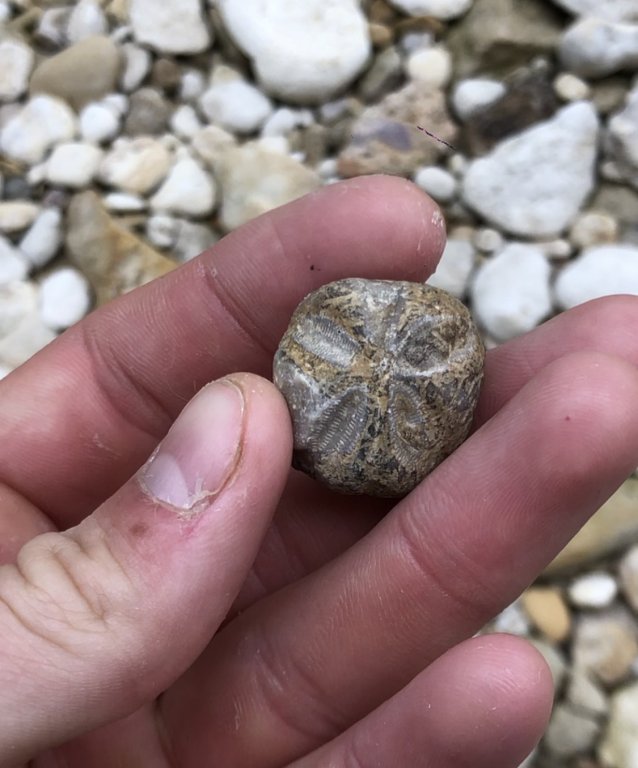 Very curious Ptychodus tooth. The late cretaceous strata I was hunting on was campanian/santonian, and this looks like a Turonian species. Perhaps I may be on the scent of an unmapped Eagle Ford outcrop (I can dream...) 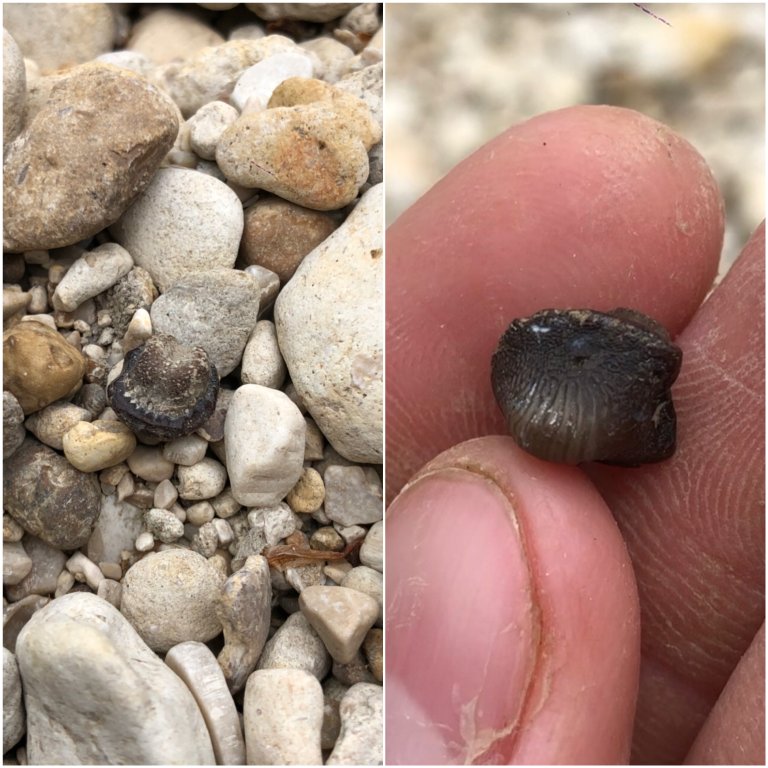 Next up, some shark tooth blades I found on the same gravel bank: 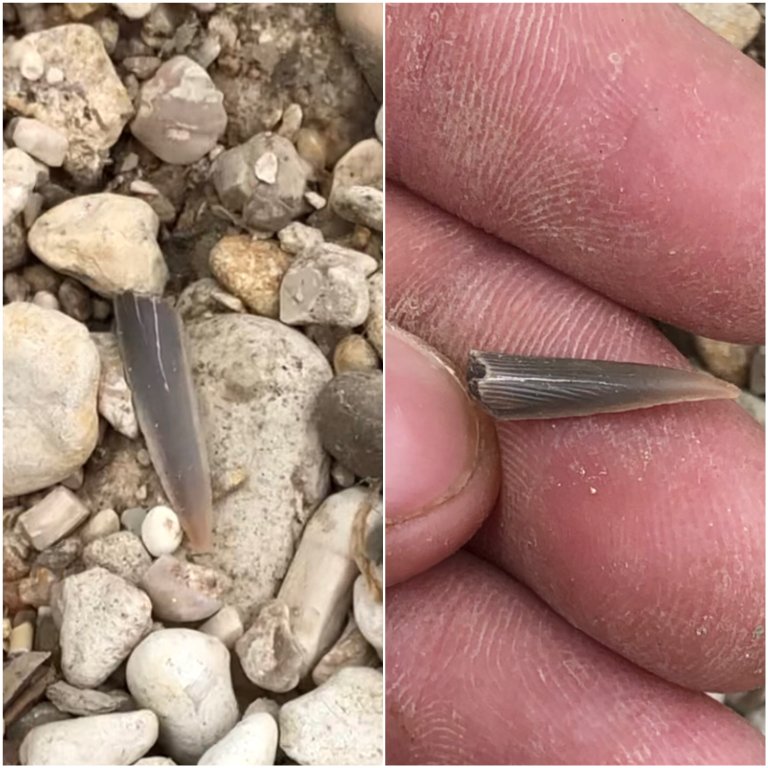 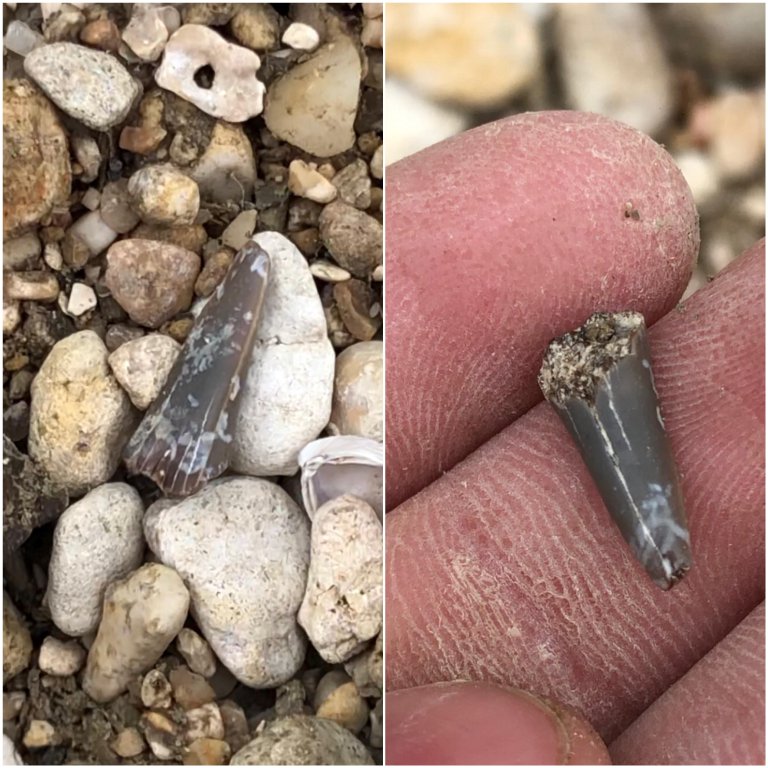 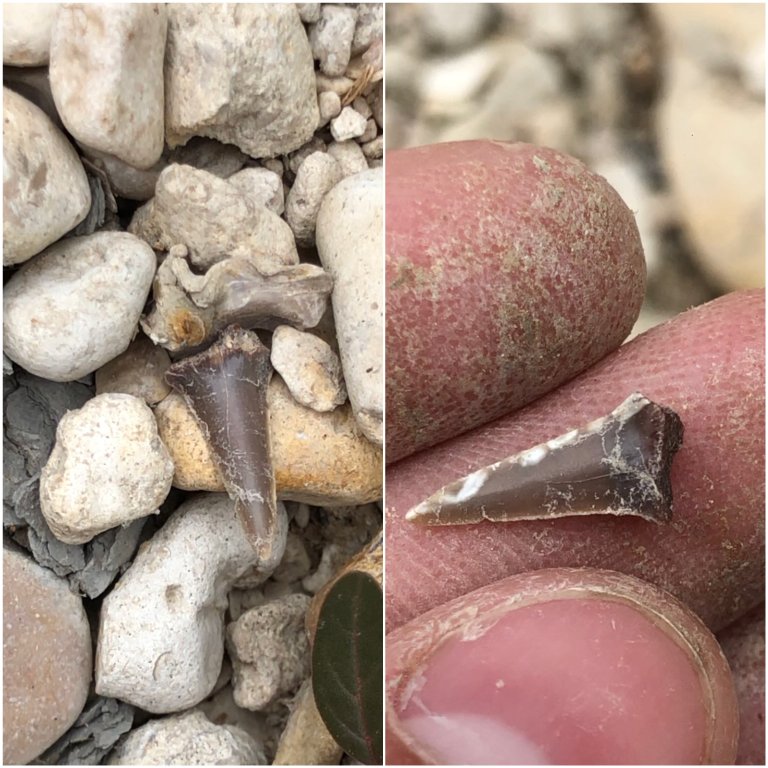 Next, a worn little vert with concave and convex ends - looks like the start of a spring mosasaur tradition here! On the walk back I made another find -Nerodia erythrogaster. Snakes and my interest in herpetology are what got me interested into paleontology in the first place, when finding out that Mosasaurs weren't dinosaurs, but squamates like those I was already interested in. 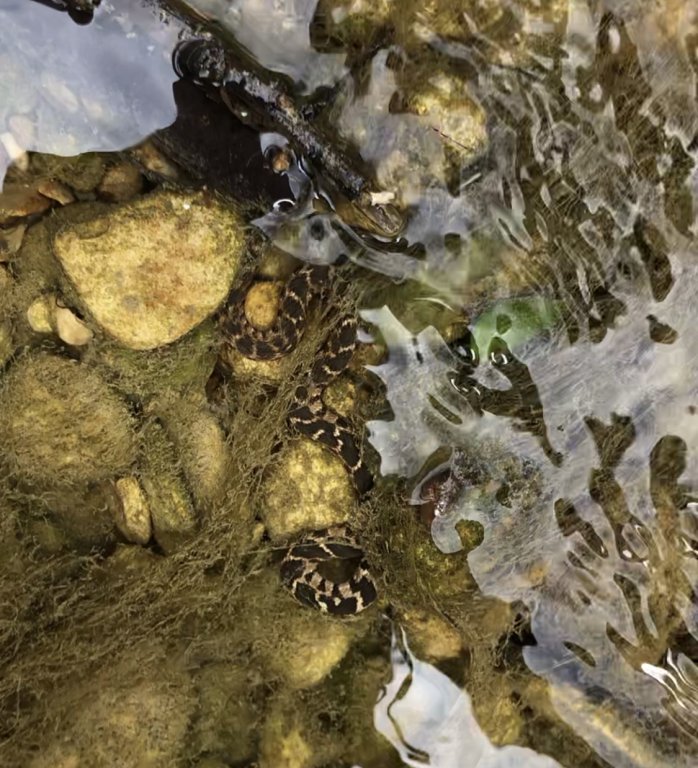 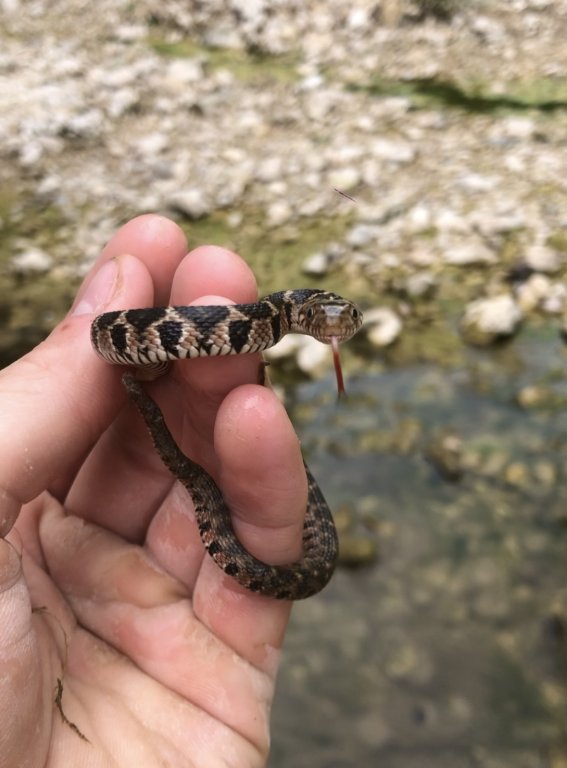 Thus this hunt came to an end, and I was satisfied. The next day had something much greater in store.

I spent the morning rock climbing and hanging out with friends who came back into town from college, and afterward met a friend (Bethany) well into the afternoon at another spot on the same creek.

Our pace was slow, but she found a few cool Scapanorynchus teeth quickly. This spot is unfortunately known to a few hunters already, and has been seeing increasing competition, as evidenced by the many foot prints lining the banks. Fortunately for me, the many counties that make up central texas are famously known for artifacts, and so these creeks attract more artifact hunters than fossil hunters, as the creeks of north texas hold better potential in the fossils area. Artifact hunters have sharp eyes, but are more likely to miss a fossil than a fossil hunter.

In the receding light, chatting lightly about mosasaurs, I saw a something I've seen in my dreams many times. Resting in front of me was my first large Ptychodus mortoni tooth, in all its glory. 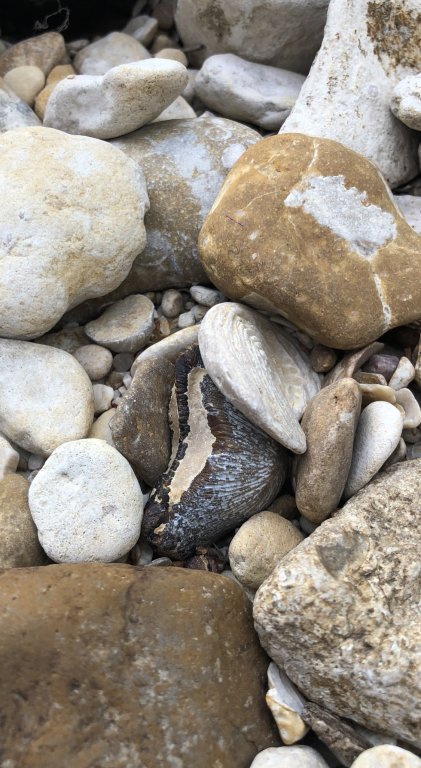 99% of the time, I hunt solo, but now in front of Bethany I had to tone down the triumphant hallelujah's, a seemingly impossible task. Not that she would have cared if I yelled out anyway. We stared at the tooth as it sat, and I tried to take it all in and process the moment before I disturbed it. 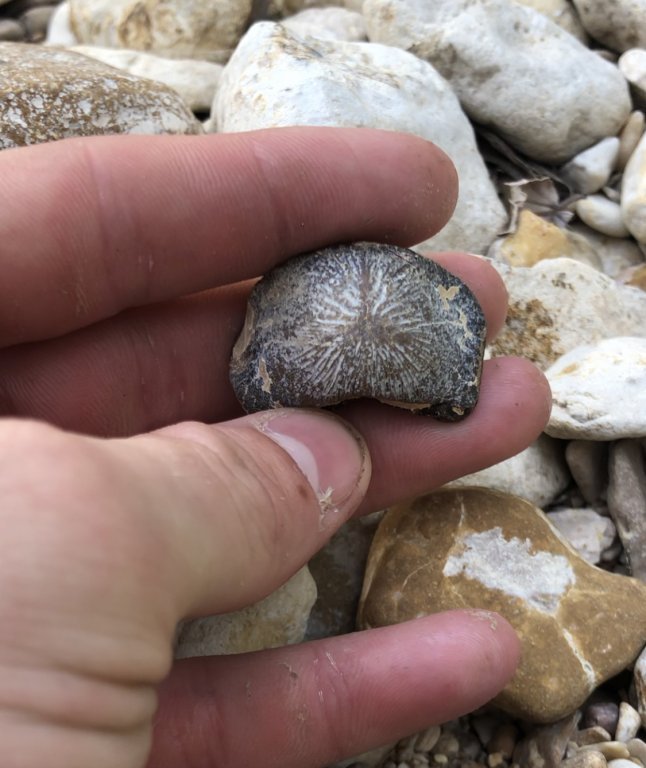 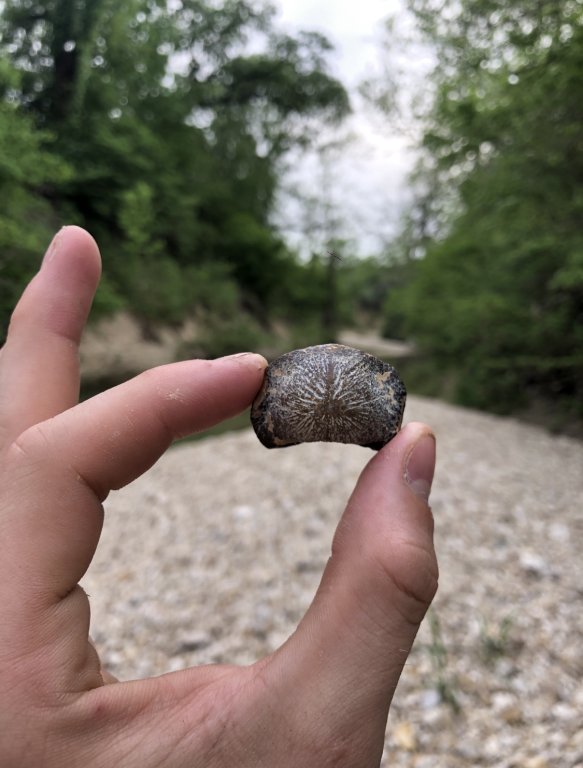 I was understandably on cloud nine, and had trouble focusing for the rest of the hunt. I must have taken it out of my pocket to look at it maybe 10 more times in that last 45 minutes. Despite that, I did notice something noteworthy one more time - an Atlatl point, lying plain on the gravel. 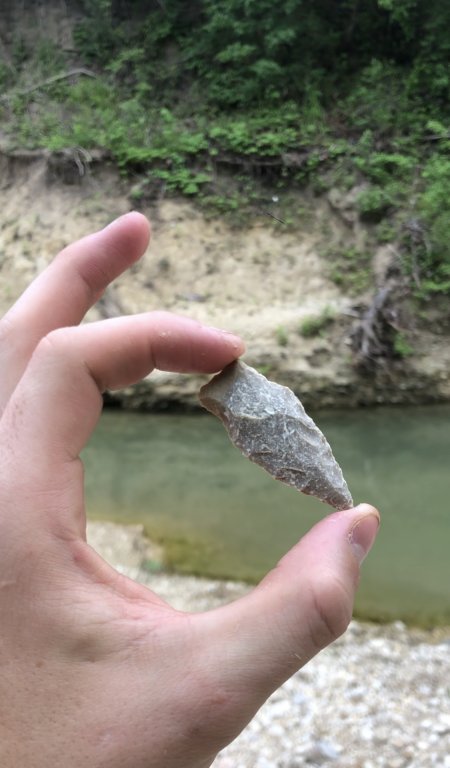 And so, that was my weekend. One spent well in my books. On a side note, another relief was that the Cidarids I shipped to Dallas to get prepped finally made it, a week late and after being shipped to an incorrect address hundreds of miles away. THAT was stressful. The relief that came with it was the cherry on top to another memorable weekend... 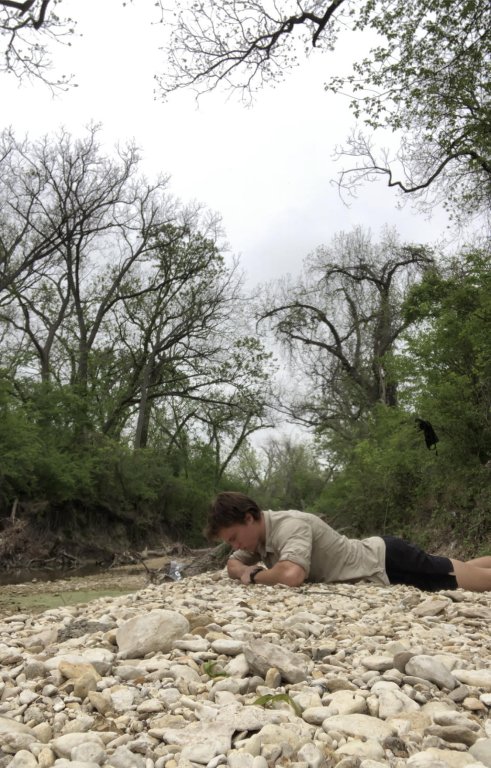