While I knew of the existence of the genus here in Texas, I didn't know much about the teeth themselves as I never was really that convinced I'd ever find one. But Carter's find proved it's possible, and what's better... he found it at a site we both knew of!

So, we went out together in an effort to find another. What's better is that I had suspicions about that site's age for a while, and the finding of his tooth attests to the late cenomanian-early turonian (ish) range. Prior to this, I assumed it was middle Turonian like the exposures nearby, and while I find the middle Turonian a greatly interesting time, I've been keen to find cenomanian strata due to it's ability to produce very occasional Coniasaur, Pliosaur and Pseudomegachasma material.

It was out first time hunting this area together, and it turns out my usual primary spot of interest is maybe 40 yards from his. He showed me the "giving boulder", and it rapidly started living up to its reputation. Carter may be "new" to fossil hunting, but his research ability and persistence is that of a seasoned veteran, and his knack for rare sharks (such as his Cretoxyrhina symphyseal, his maastrichtian nurse shark tooth, his Pseudomegachasma and huge maastrichtian saw shark rostral tooth) is astonishing.

Rapidly, the finds started flowing - for the most part tiny Squalicorax falcatus and Ptychodus of various species, and some really nice teeth from other species began popping up as well: 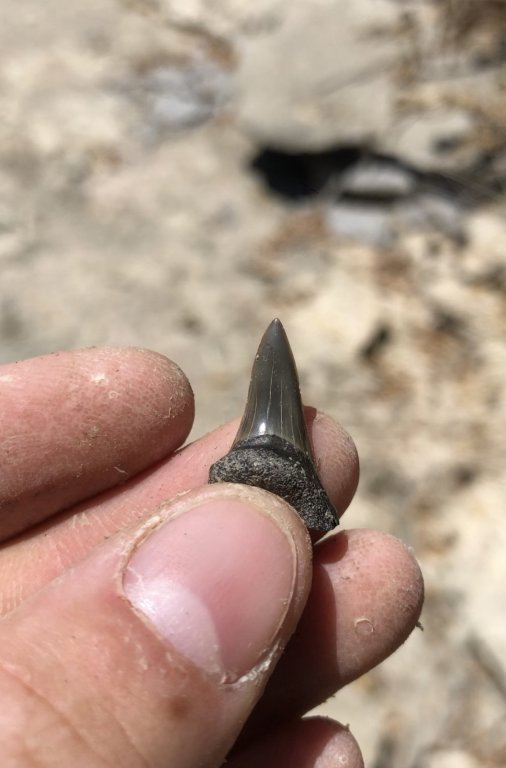 Squalicorax falcatus. It's easy to imagine these as the Cretaceous equivalent to tiger sharks, both from tooth morphology and their opportunist natures. 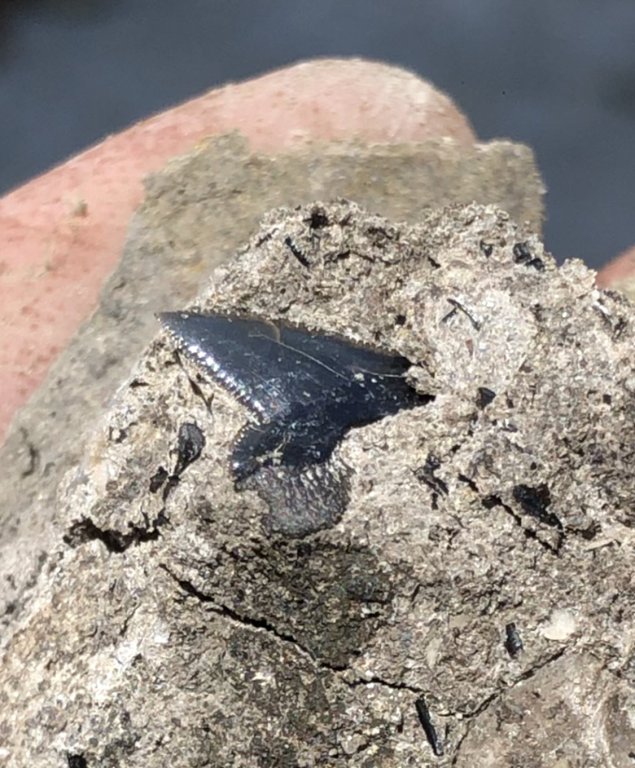 What looks like Cretolamna - personally an uncommon genus for me 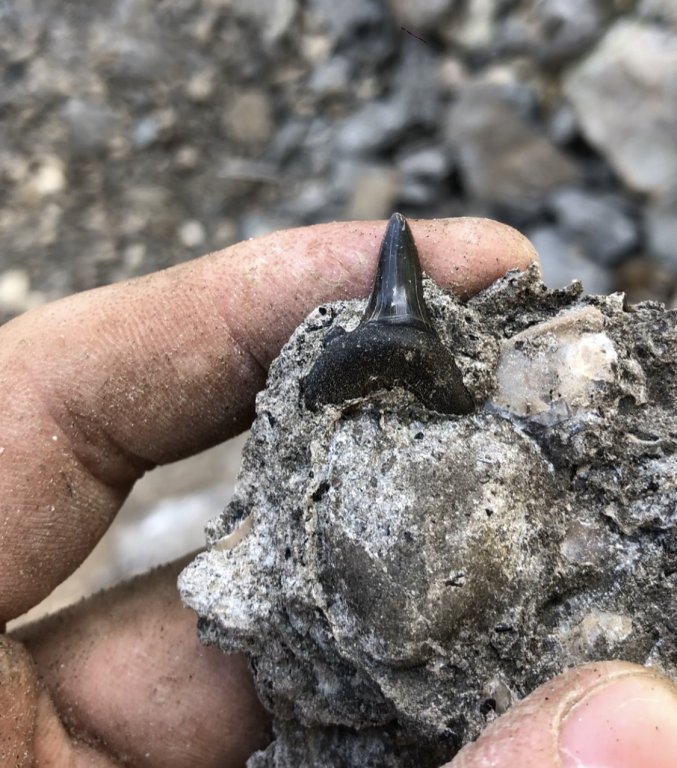 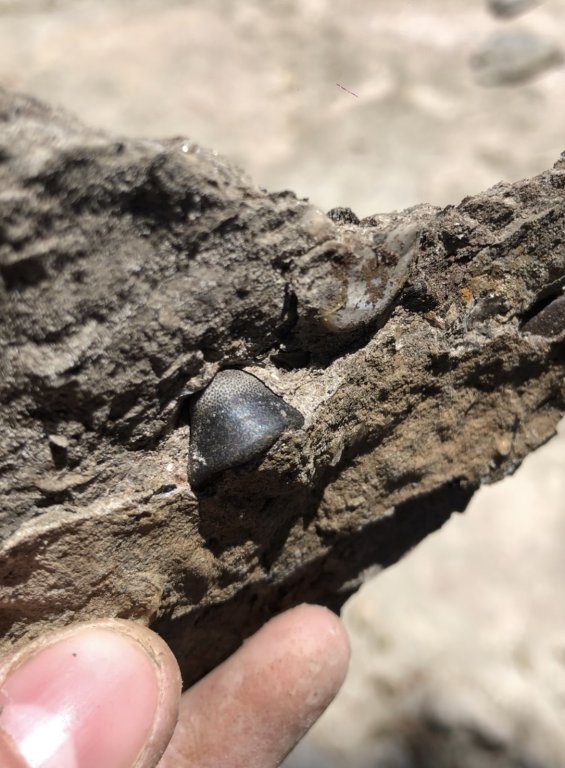 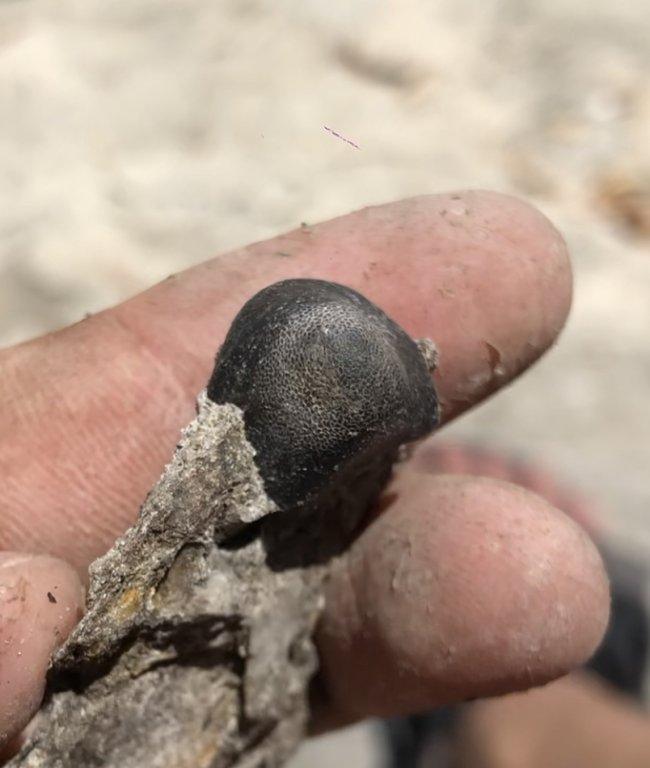 It was soon after seeing this that I made a find I have long dreamed of...

I was working on the same slab that produced the strange Ptychodus tooth, which I pulled from the bank not even 10 feet away from where Carter was making crazy finds of his own in the Giving Boulder.... when I saw this: 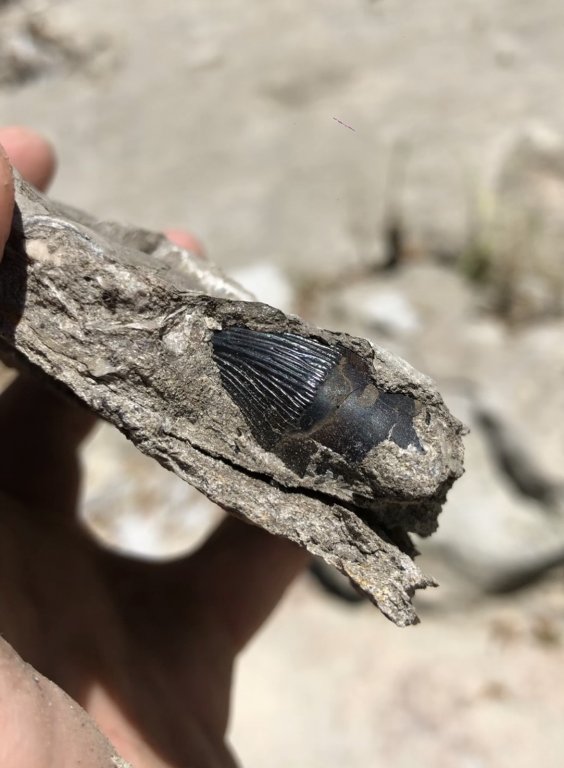 It's like I was hit with a shock wave, it sent me absolutely reeling. I lost all inhibition, released a string of not so appropriate words, and fell to my knees, only to get up and start pacing in circles repeating the same not so appropriate words interrupted by cheers. With my explosive reaction, Carter at first assumed I smushed a finger under a falling hammer. I shakily said "no... Pliosaur tooth". He saw it, and while his reaction was much more controlled than mine, many subsequent curses still followed. We were delighted, but any random passerby wouldn't have known from looking at us

This was absolutely electric. Most of my best finds I was unsure of upon discovery - but with this I instantly knew, so the subsequent adrenaline and then adrenaline crash meant I had to take a long recovery before I started poking around again.

Right as I got back into it, Carter made another crazy find - this time a beautiful Ptychodus occidentalis of great size and fantastic condition. It's funny, because prior to the P. occidantalis I found at a different site a day or two before, I had never even seen one in person, yet on this day we found a couple - though Carter's was by many, many orders of magnitude the largest: 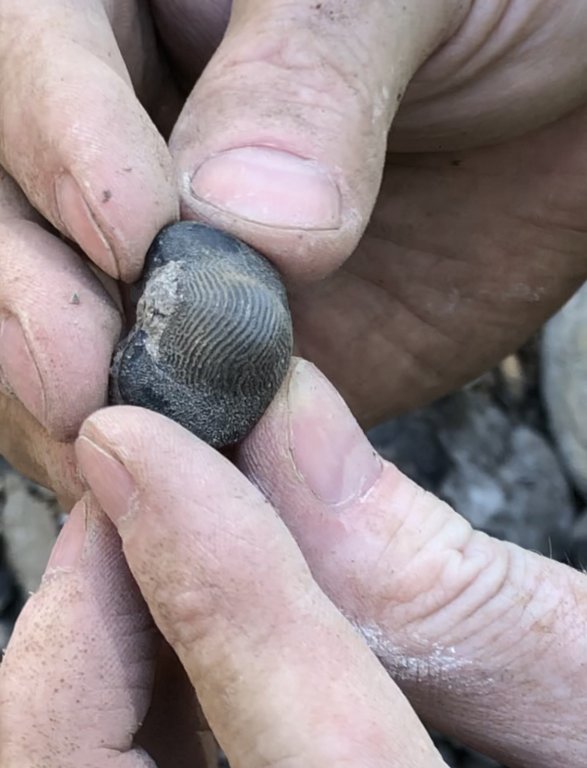 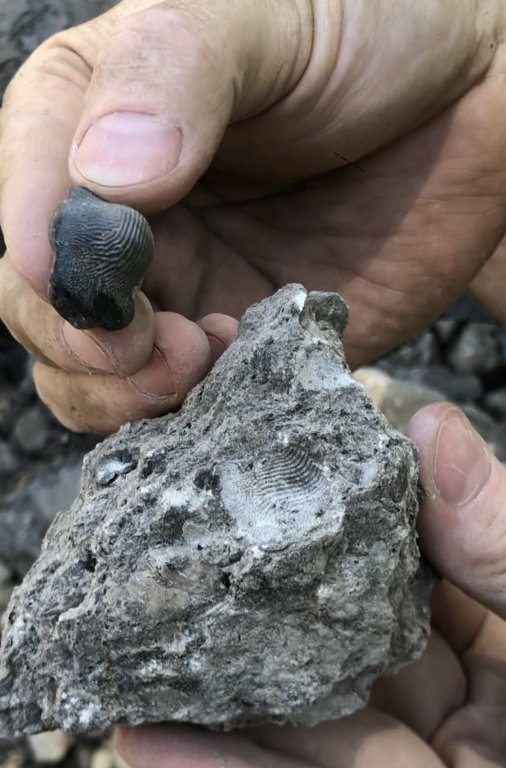 Everything was carefully wrapped up and taken home, and so concluded my last hunt before moving to my new college. No Pseudomegachasma, but I cannot complain in the slightest with the bycatch of a long awaited goal of mine.

That was yesterday - today was trip number two.. which was moving into my flat in College Station, where I'm continuing my journey more formally as a student of paleontology (though my major is Biology, but you get what I mean) at A&M. It's intimidating moving out from home for the first time, and I had a harder time with it than I thought I would. But, then I remind myself why I'm here and what I'm here to do, and I'm newly determined.

Here I am now, in my new room for the first time ever - all in the pursuit of a passion that started here on the forum. I cannot thank you guys enough - I know it seems silly thanking folks on the internet, many of whom I've never met, but without the community here I wouldn't be here either.

I noticed the arrangement on my desk earlier - and I snapped a photo, because it captures the energy of what my next two years here will hopefully be like. In the photo are some paleo books I've brought, my field watch that has somehow survived every adventure and misadventure I've put it though in the last 8 months, and a travel box containing two specimens: The Pliosaur tooth that I'm ever so slowly prepping (updates on that will be in this thread), and my Hadrodus hewletti tooth. 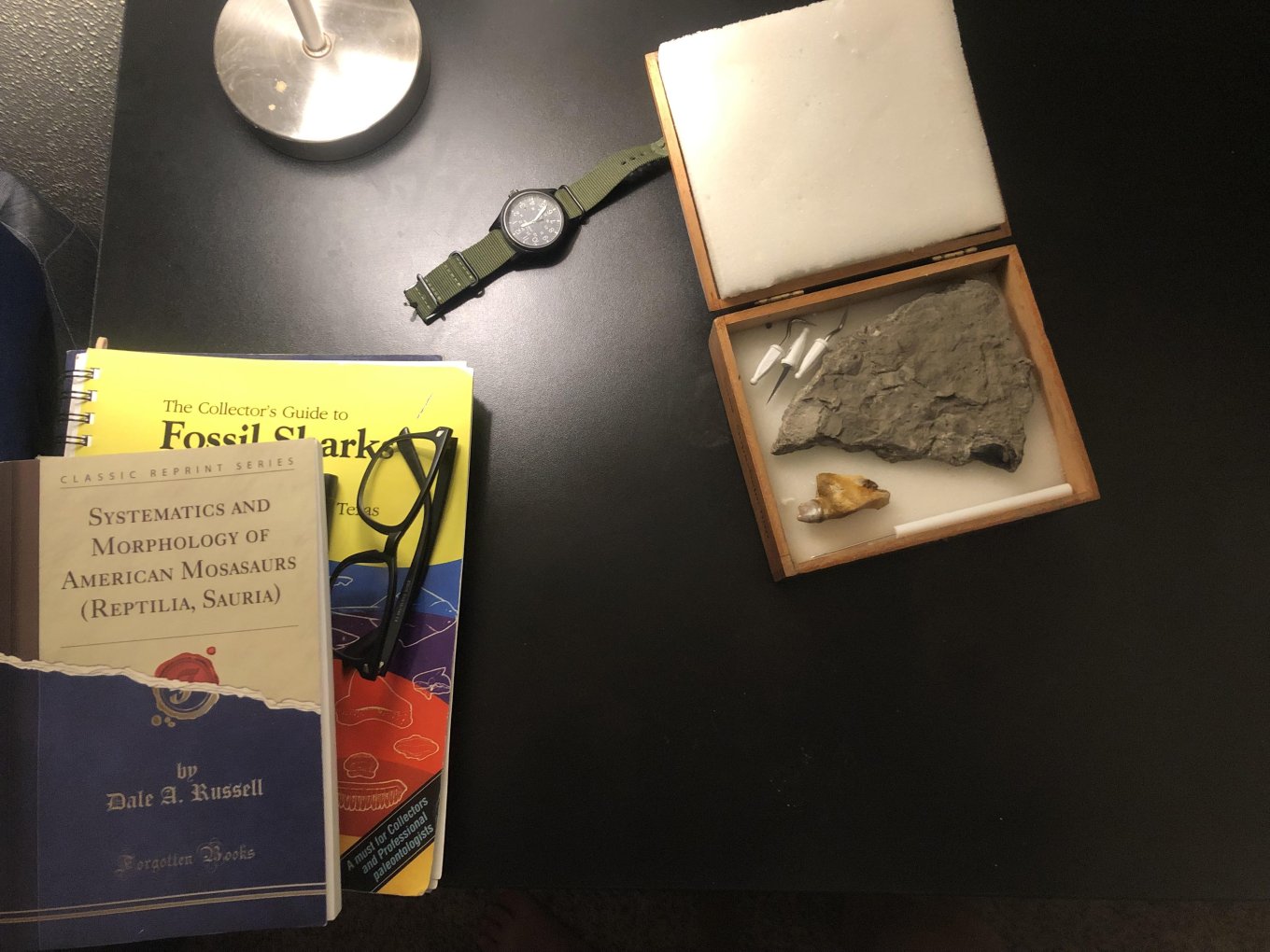 Update: The prep is finally finished! Very happy with this fossil.

Only needed glue once, near the root. Soon I'll drown the whole thing in some 3% paraloid solution. 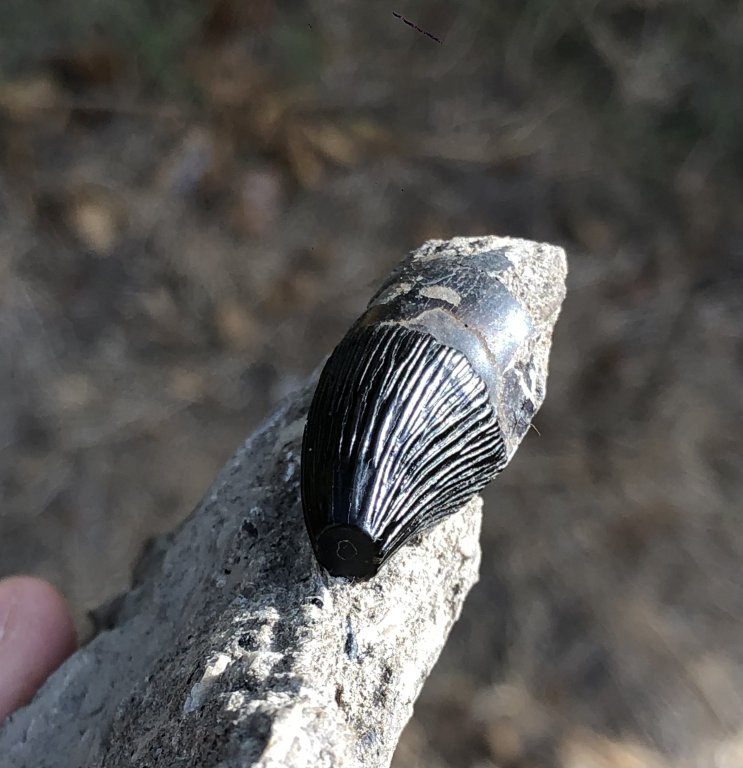 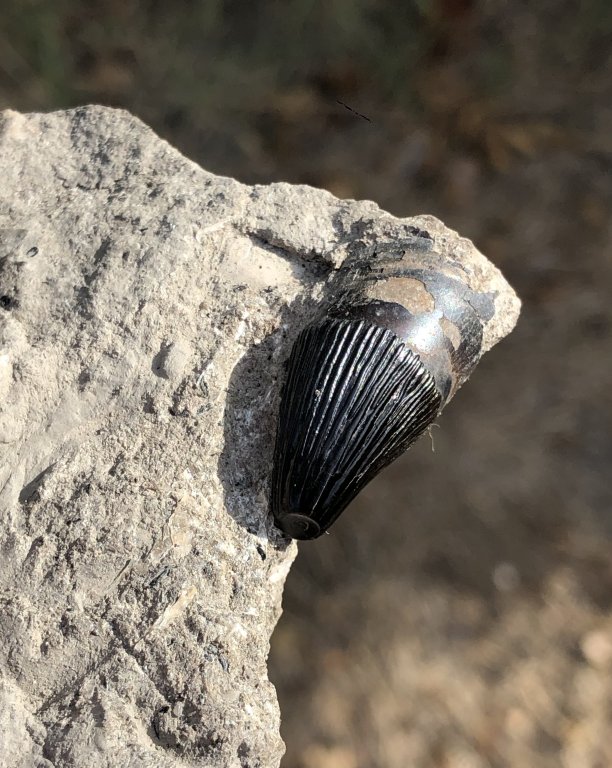 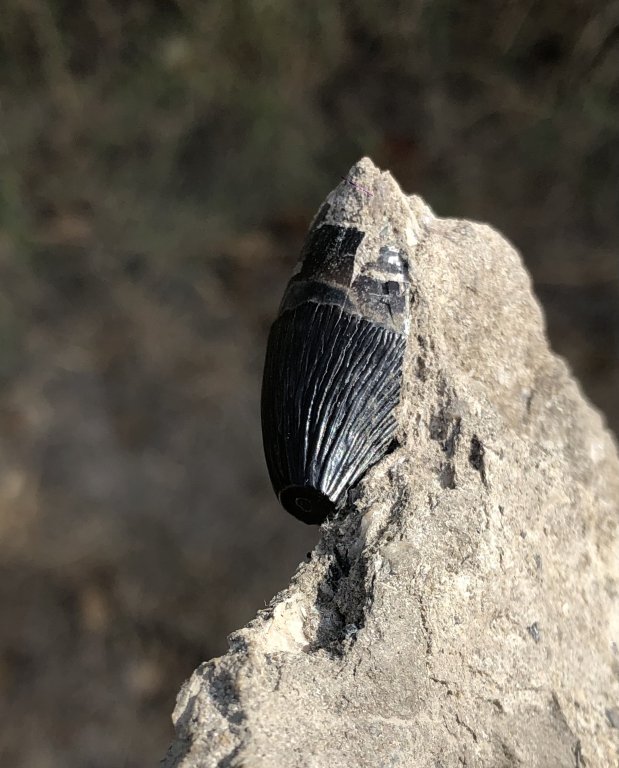 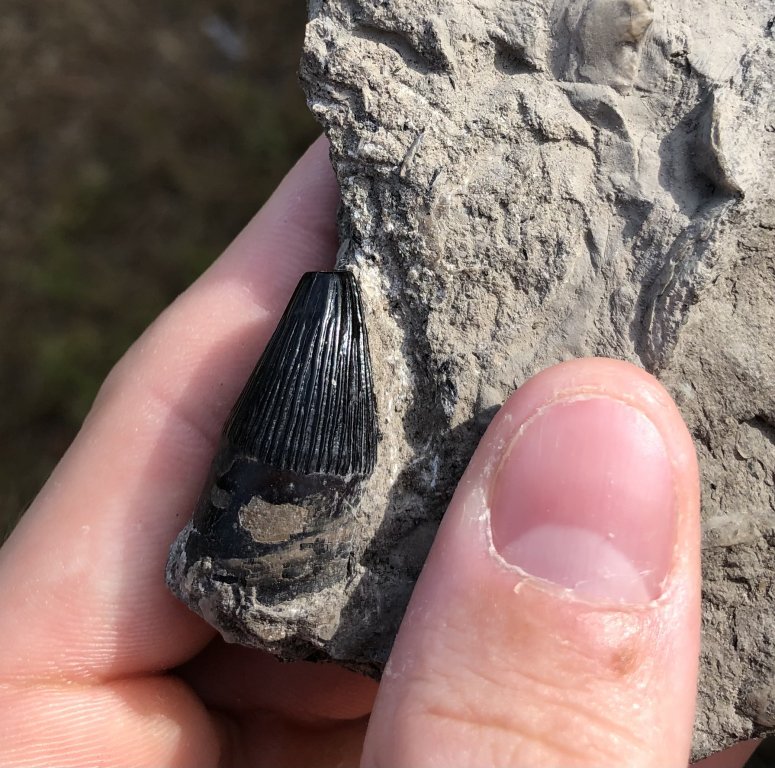