It was time to paddle one of my favorite places. The water had finally receded from recent rains to make the trip manageable. It was also a test for a shoulder injury that I had been working back into shape. So I waved to my wife and slipped the boat into the cold water.

As I negotiated the twisted channel, I noted many changes to familiar stretches of water. A new tree down here, a missing log jam there and fresh, untracked gravel soon became part of things behind me. Yet the water still had its surprises as I dealt with the first of four major, new logjams. Slippery mud banks, ripping briars and budding poison ivy greeted me on every portage around the chaos of flood debris. But at the same time, I started to make a few finds and a jaw fragment with a tooth root made the morning a little easier to bear.

In familiar territory, the memories of past finds kept me optimistic. Anticipation generated the excitement I felt when I reached under the water to lift out a dark object. Most of the time it was nothing; this time it was part of a fish. The unidentified bone fragment was soon followed by a vertebra from another Upper Cretaceous fish (possibly Xiphactinus).

After going around another 20 yard logjam, I found my first mosasaur vertebra of the day. Although it was slightly eroded, I could still make out the eye-like scars where the caudal chevrons of the tail attached. It was still a nice find; I’ve learned to appreciate that what may be a common find in one geographic area can be rare to unknown in others. So any time I have the chance to pick up a 70 million year old reptile bone, I generally do. Within the next two hundred yards, another mosasaur caudal vertebra, this one in a little better shape, laid just under the water. It was already a good day.

The solitude of my solo run allowed me a state of mind which made it easy to imagine walking on the bottom of the late Cretaceous sea or hiking through somewhat familiar Pleistocene terrain. I pictured complete fossil skeletons just a few feet inside the Taylor Group clays and mammoth herds lingering on the banks above me. However, on a steep descent back into the water, a slight slip on the muddy bank focused my attention to the reality of the risks involved while alone. I moved on with heightened senses.

I am often amazed at how some finds are made. When I turned around to lift the boat off a sandbar, something caught my eye. Straight lines contrasted with the rounded gravel and this time it was a fractured horse tooth. Yet a few minutes later, that “contrast” was a nice, resharpened Pedernales dart point. My fossil hunting mojo continued over the next hour or so and I added two more mosasaur vertebrae to my cargo. 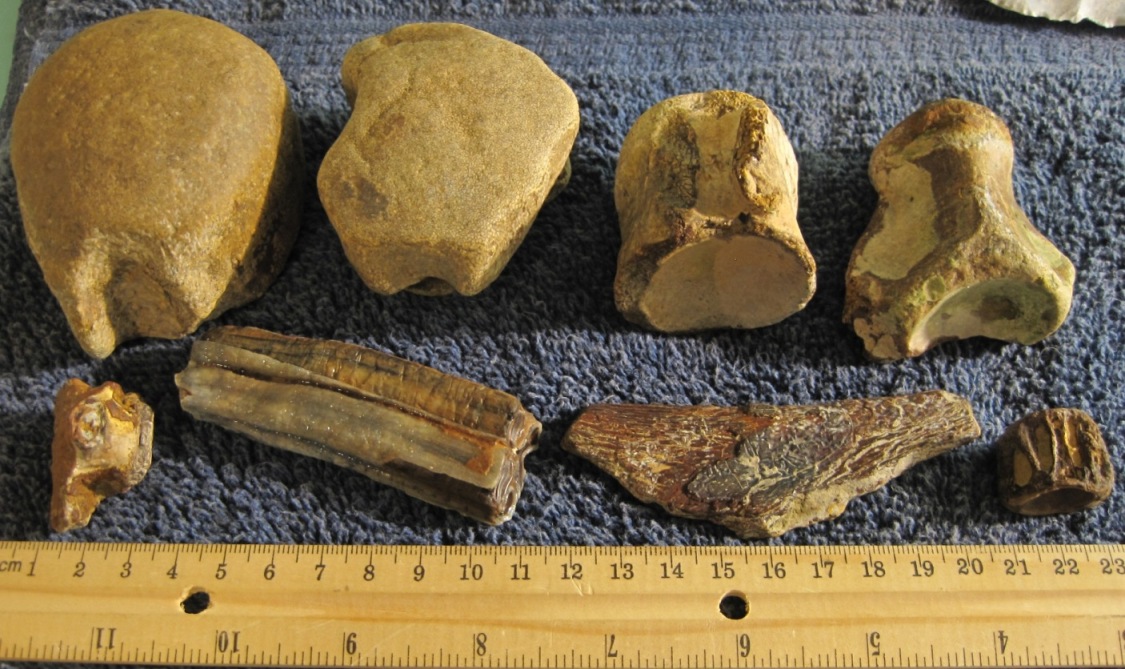 Then, it happened; I saw tracks…aarrghh! I switched hunting modes as I looked at the size 10 footprints. They were fresh enough to be from the morning or the previous day. I studied the directional patterns to see if I was following a fisherman or fossil/artifact hunter. After a few hundred yards, I concluded it was a hunter; the weaving imprints left me with little doubt. When it happens, I try to look where they haven’t or look even closer where they have. It was time to be both tracker and hunter.

With my adjusted viewpoint, I kept moving on. Scanning and tracking, in and out of the boat, I found a few tidbits missed by the other hunter. Smudges on the algae coating the underwater gravel indicated I was still “following”. Yet after about a mile, the pattern of the tracks started to change from a wandering to a more linear path. Ahhh…they might have been tired or running out of time. Either way, it allowed me more unexamined gravel to search. The reward for persistence came only 4 feet away from the tracks and…

One of the largest flint knives I’ve found 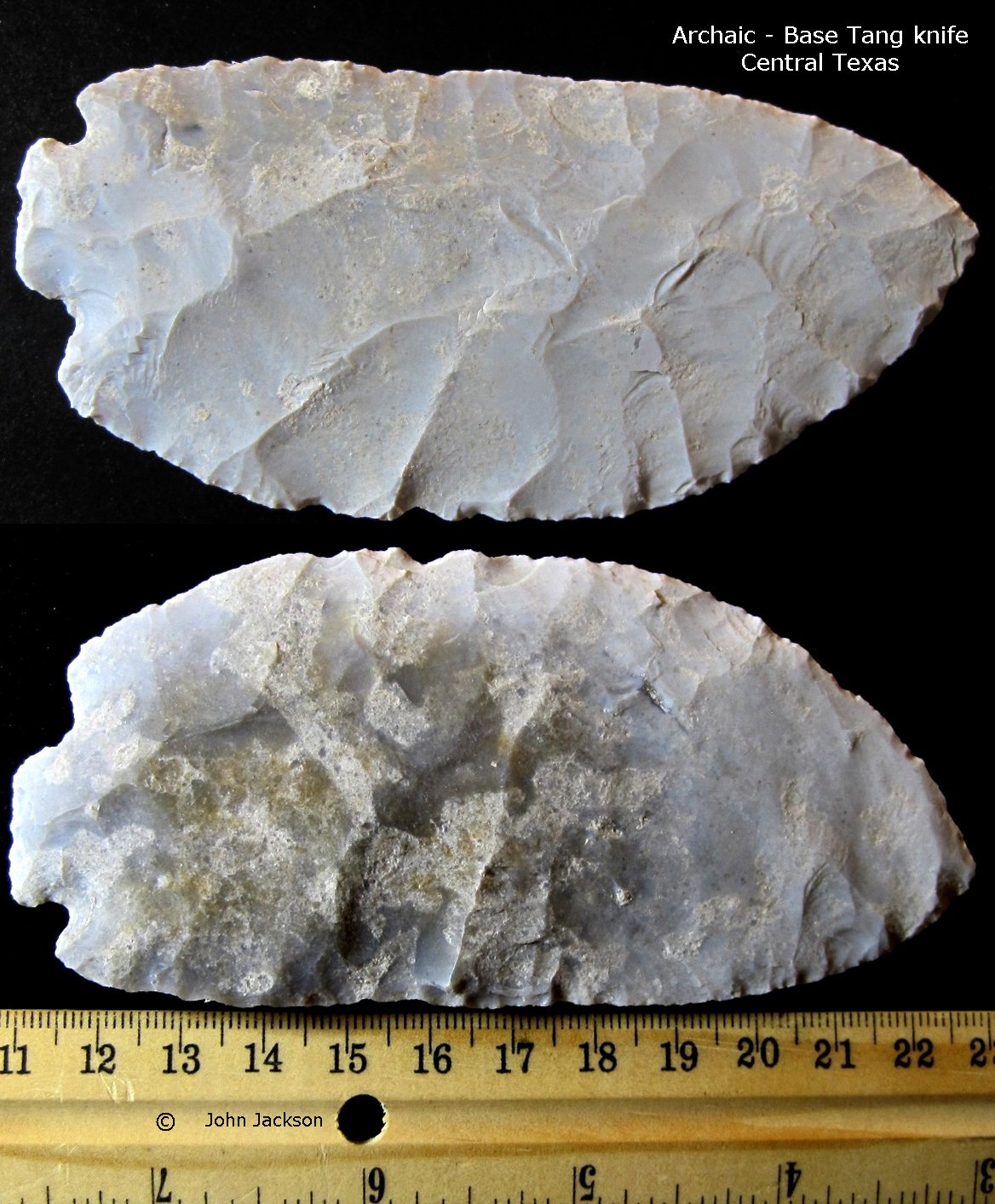 With overcast skies and late afternoon approaching, I became more selective in the areas I comprehensively searched. On one of the last large gravel bars of the trip, I stepped out of the boat to pull it from the current and, several feet off to the side, I caught sight of another dart point. (The adrenaline was still in my system from the previous find!) I felt a big smile as I reached for the camera. My wife and friends would be surprised by all the finds when I got home; but, I would enjoy telling the story of each one.

Who was the last person to touch this before I did? What happened that day? 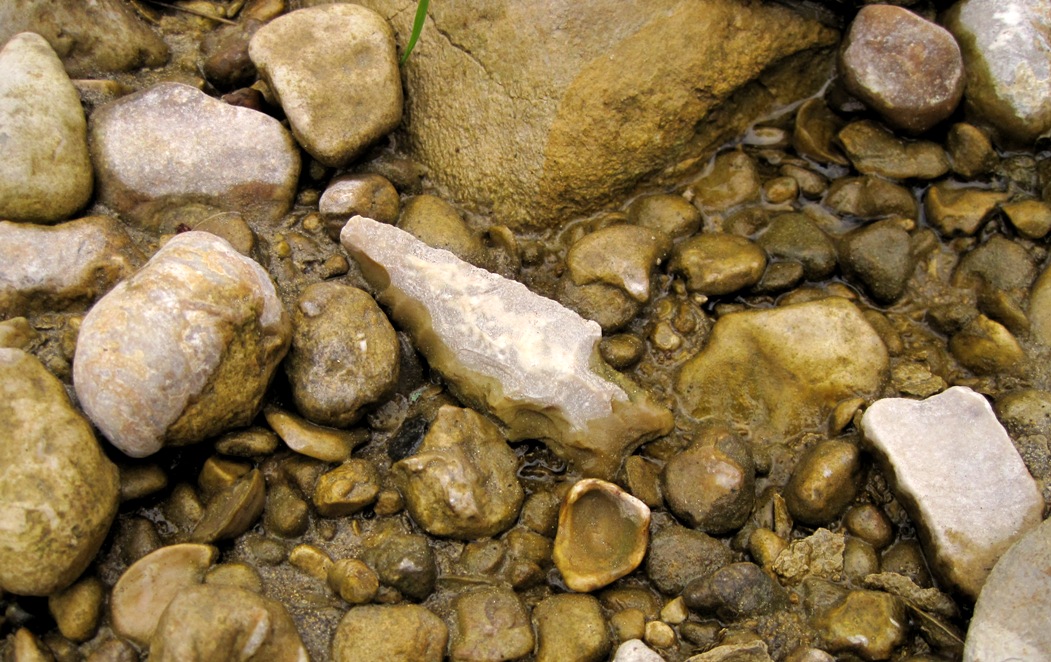 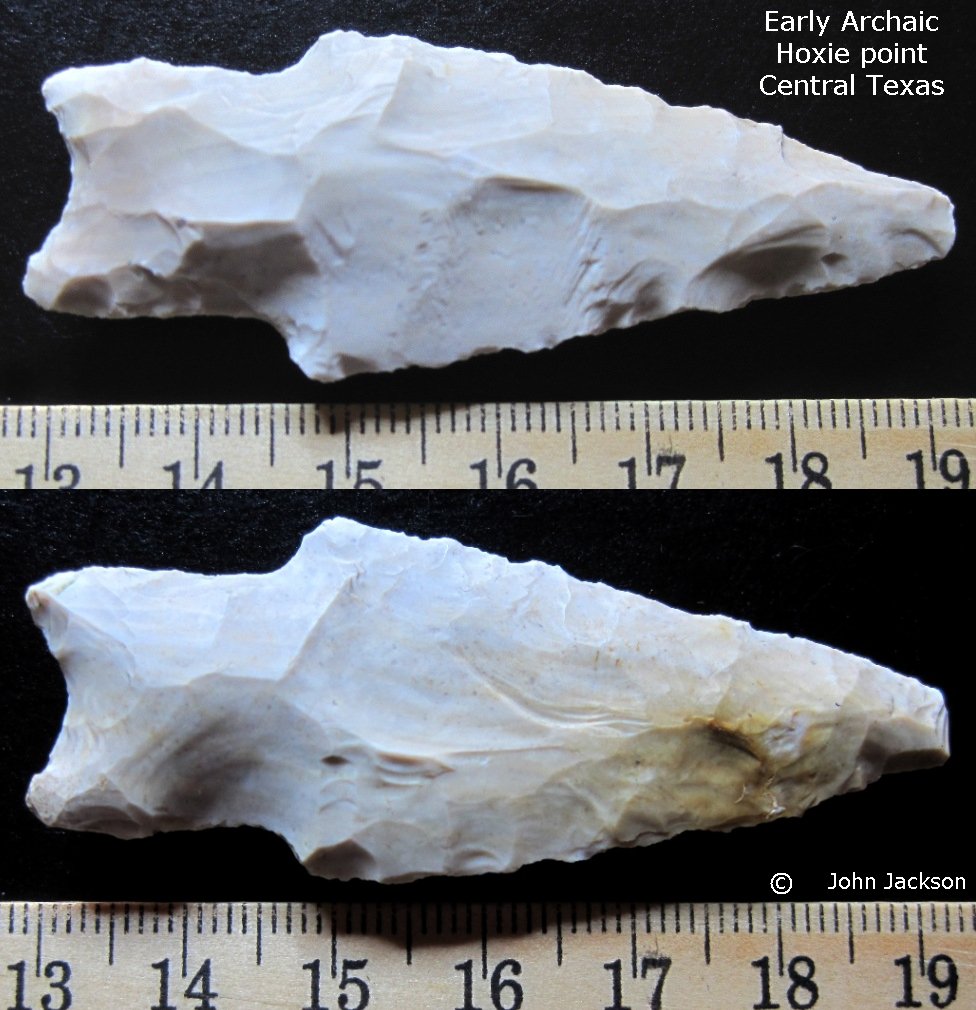 I finished photographing the Hoxie point and started to scan the bar. About 15 feet away, I reached for what I thought was just a chert flake and I pulled another artifact from the sand. This one appeared to be older than the others. It may be a variant of a late Paleo San Patrice point. Impact damage was the likely cause of the flake scar on the tip.

I chuckled on the way back to the canoe. At the water’s edge, I looked down and spotted a broken, crudely flaked point. The chuckle turned into a laugh.

What a day! I lifted my paddle and gear in one hand and hefted the 16 foot boat on the other shoulder then purposely made my ascent up the bank at the take-out. My heart pounded by the time I reached a spot to drop everything. However, with the exertion came the satisfaction and reward of persistence in the field.