Adrenalin pumped through me like it usually does on the way to a new location. While on the road, I enjoyed ‘working out’ the geology I traveled over. The sunny spring morning framed the entire outdoors in vivid color, and from the corner of my eye, I noticed some fresh excavation in the distance. Like many other places, I made a mental note of it and continued to my destination. Dozens of miles and minutes later, my friend, Bob, and I had pulled our gear together and loaded things into the boat. We waded through the spring bloom and poison ivy and began a journey we would not soon forget. 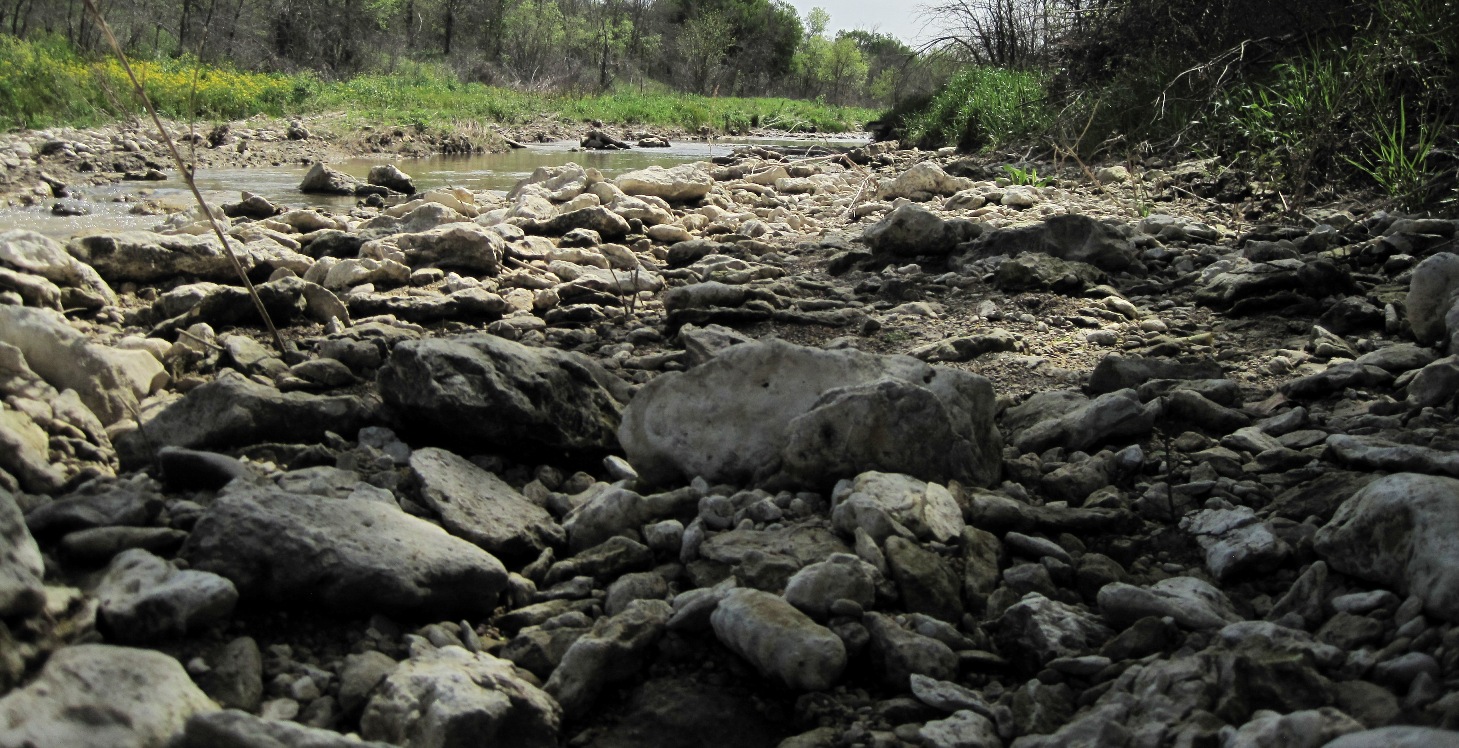 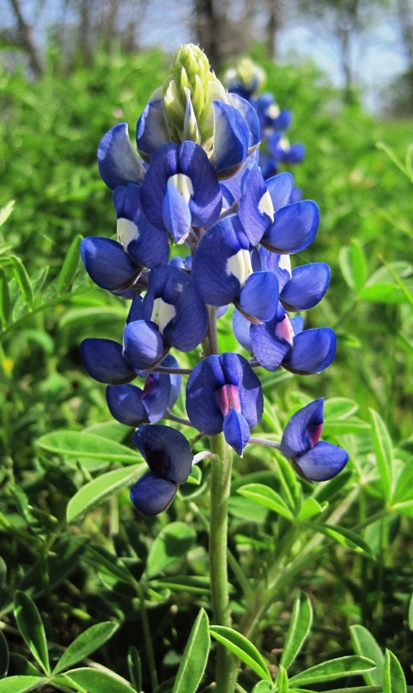 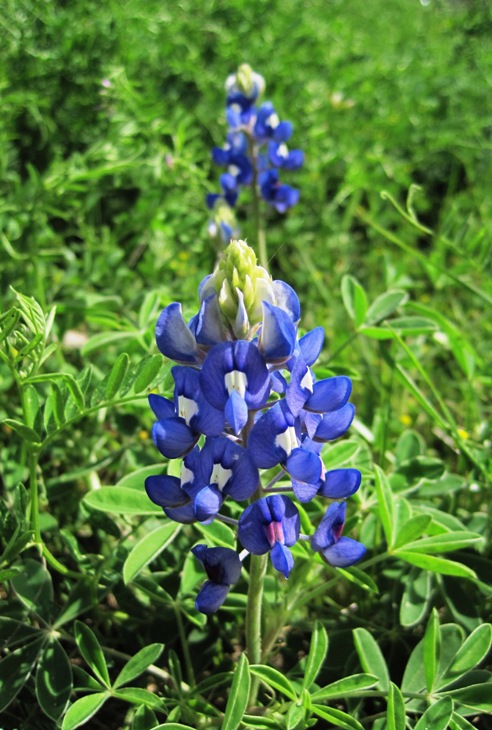 I wanted to learn more about one of my favorite geologic outcrops on this trip, the Lower Cretaceous Washita Group. Its formations have fascinated me with the remains of creatures of incredible variety and beauty. From the monster-sized Eopachydiscus ammonites to the simple, elegant form of Kingena wacoensis brachiopods, the North Texas strata have enchanted fossil hunters for years. According to some of the latest research, the lowest in the group, the Kiamichi Formation, is supposed to be around 103.5 million years old. It is followed by the more well known Duck Creek Formation at near 102 million years old. The Fort Worth, Denton, Weno, and Pawpaw Formations are found in the middle of the group. Above these, the Main Street Limestone (about 97 million years old) is overlain by the Grayson Marl. The Washita Group is finally capped at close to 96 million years old by the Buda Formation. Our trip started near the ‘bottom’; just where was our next challenge.

One of our first clues came in the water when the partial whorl of a Mortoniceras ammonite laid in contrast to the bottom gravel. My interest was further piqued by a second ammonite wedged beneath a few rocks on the next gravel bar. Other fossils in combination with these ammonites and a bank bluff of alternately receding layers of marl and hard stone suggested we were in the Fort Worth Formation. 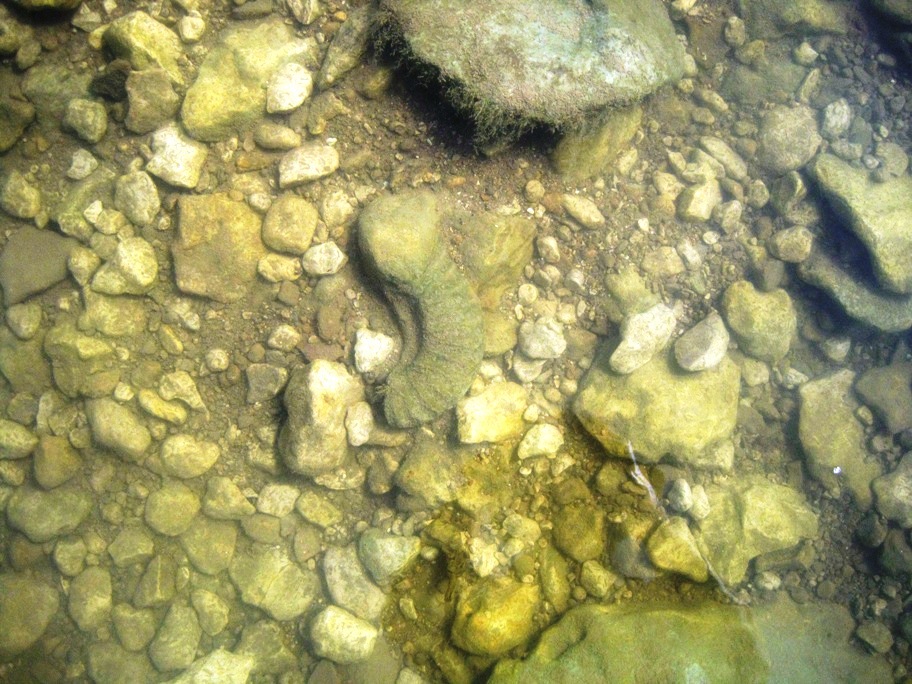 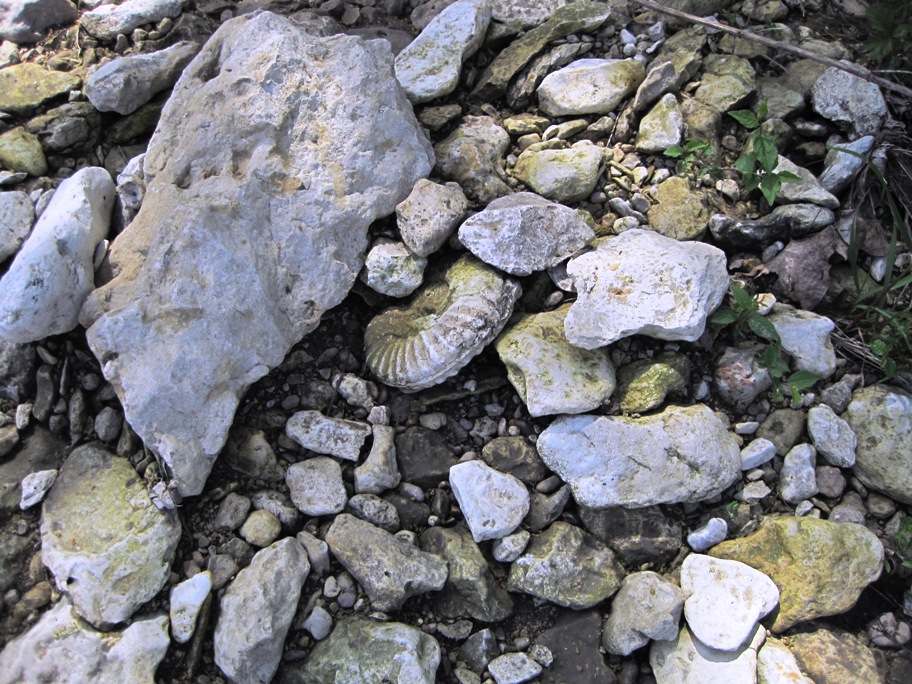 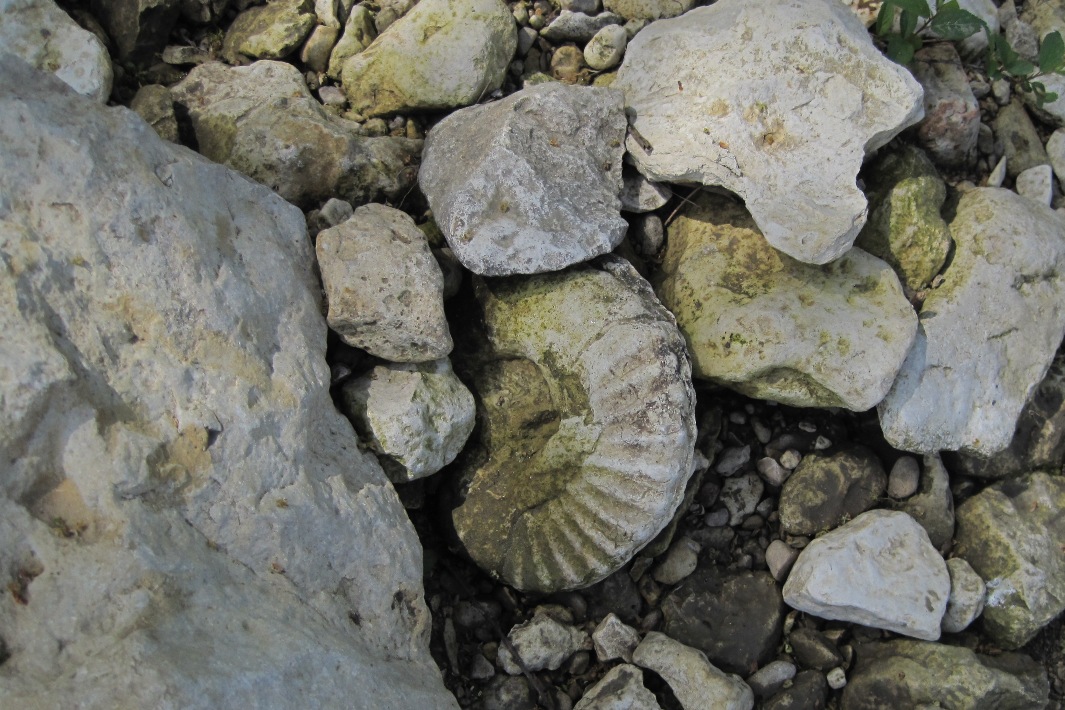 Of course, we kept in mind that the gravel bars contained the reworked fossils of any formations found upstream. But before long, Bob found a large Mortoniceras ammonite eroding from the silt covered formation. As we moved along the stream, it became apparent that no one had collected there in a long time. Large Macraster echinoids and additional ammonites were scattered periodically in the gravels. It was amazing to see so many. Bob found two other large ammonites hiding in the gravel. We picked up a few more fossils along the way, but most looked their best where they laid...capturing a moment of potential Cretaceous perfection. 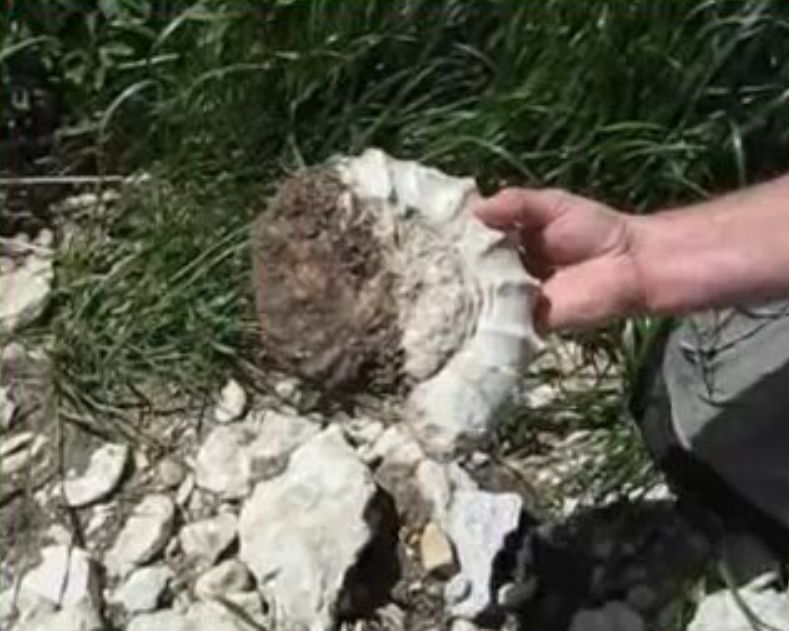 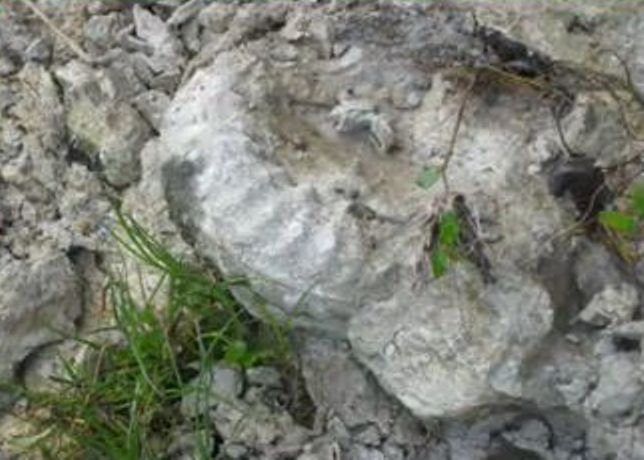 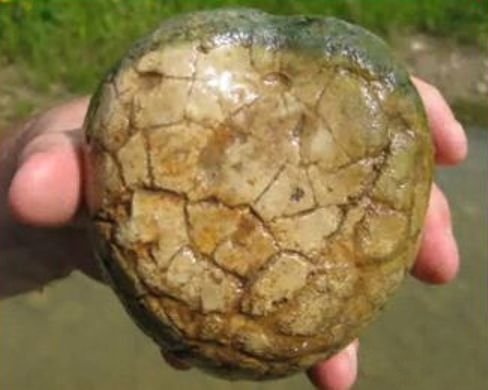 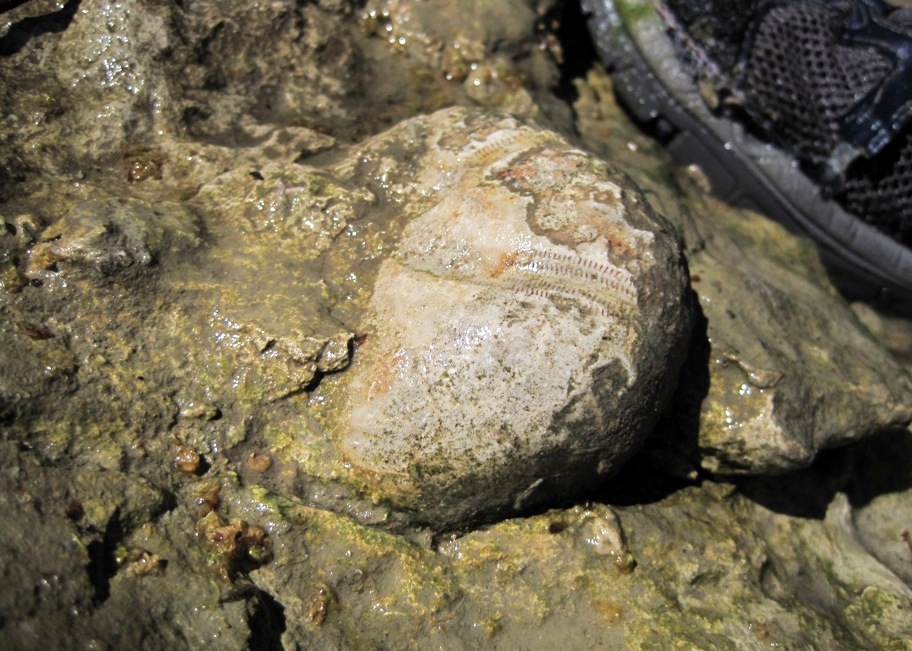 Keeping us company in water were other creatures, too. A shy red-eared turtle and a well-fed diamond backed water snake added to the adventure. But it was a close encounter with several spawning longnose gar that kept the adrenalin flowing. 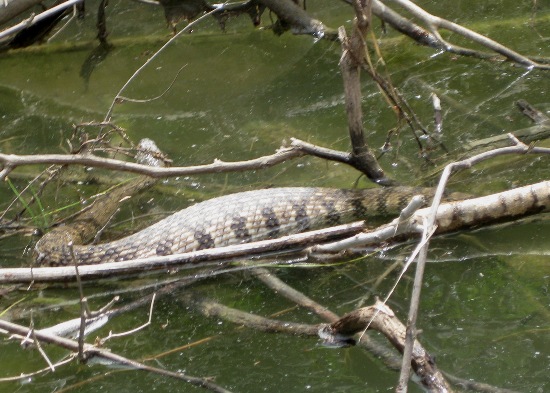 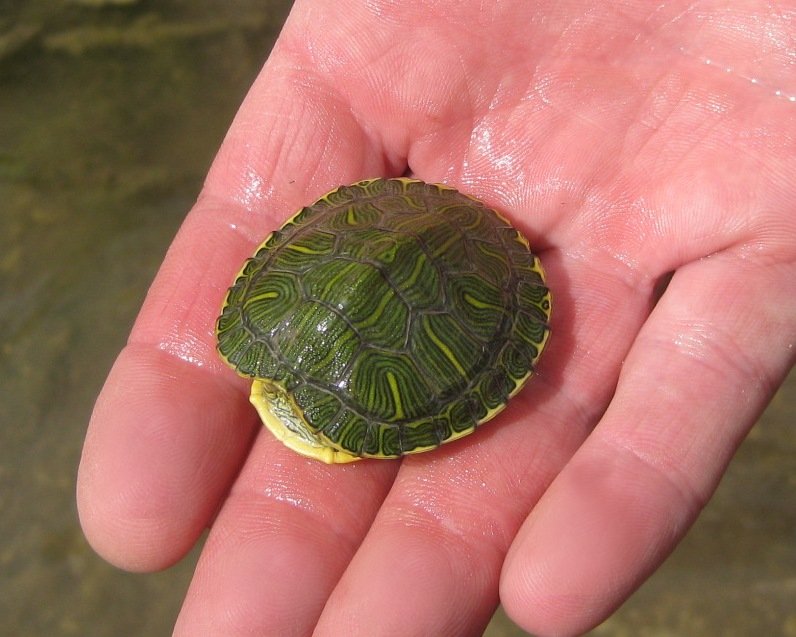 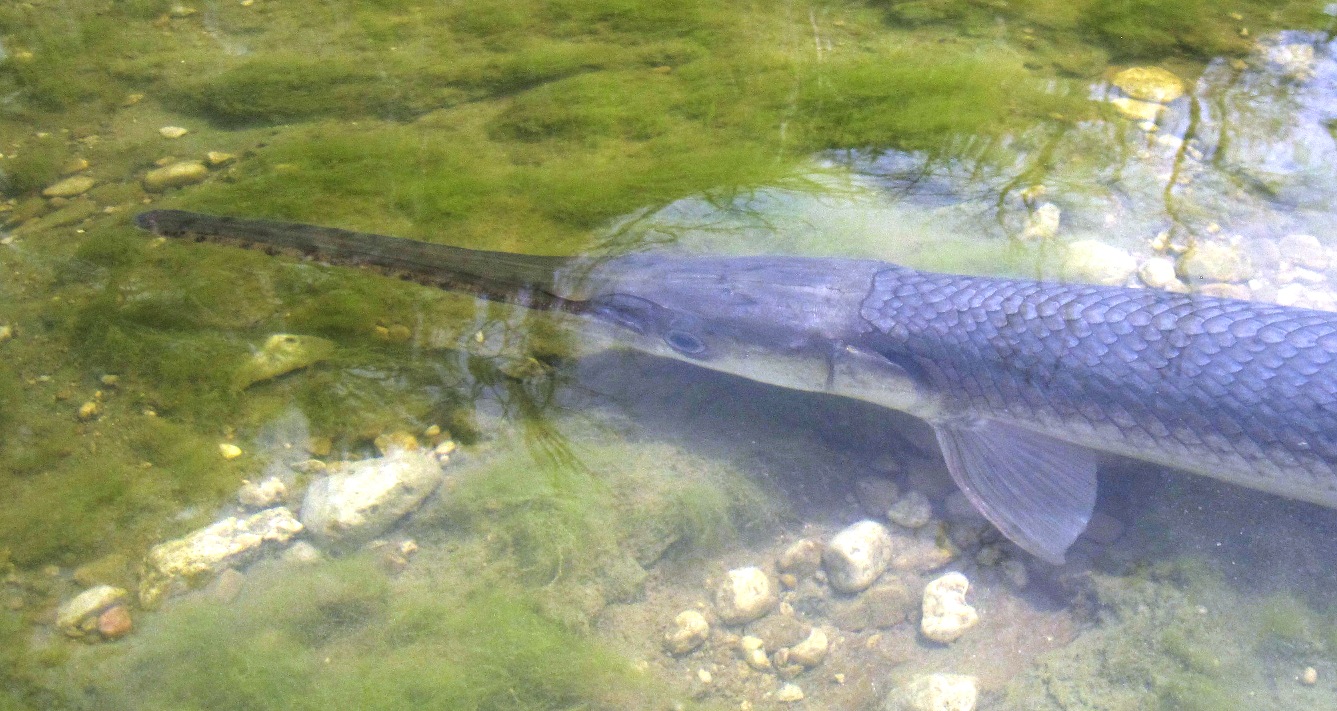 Bob’s haul and my finds 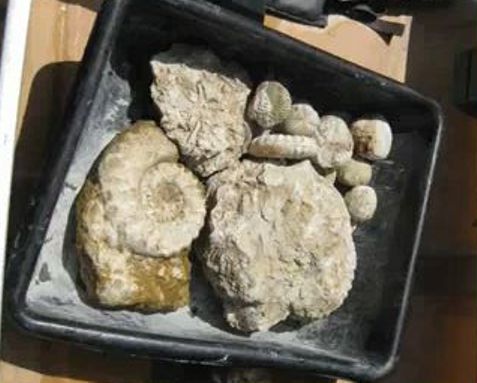 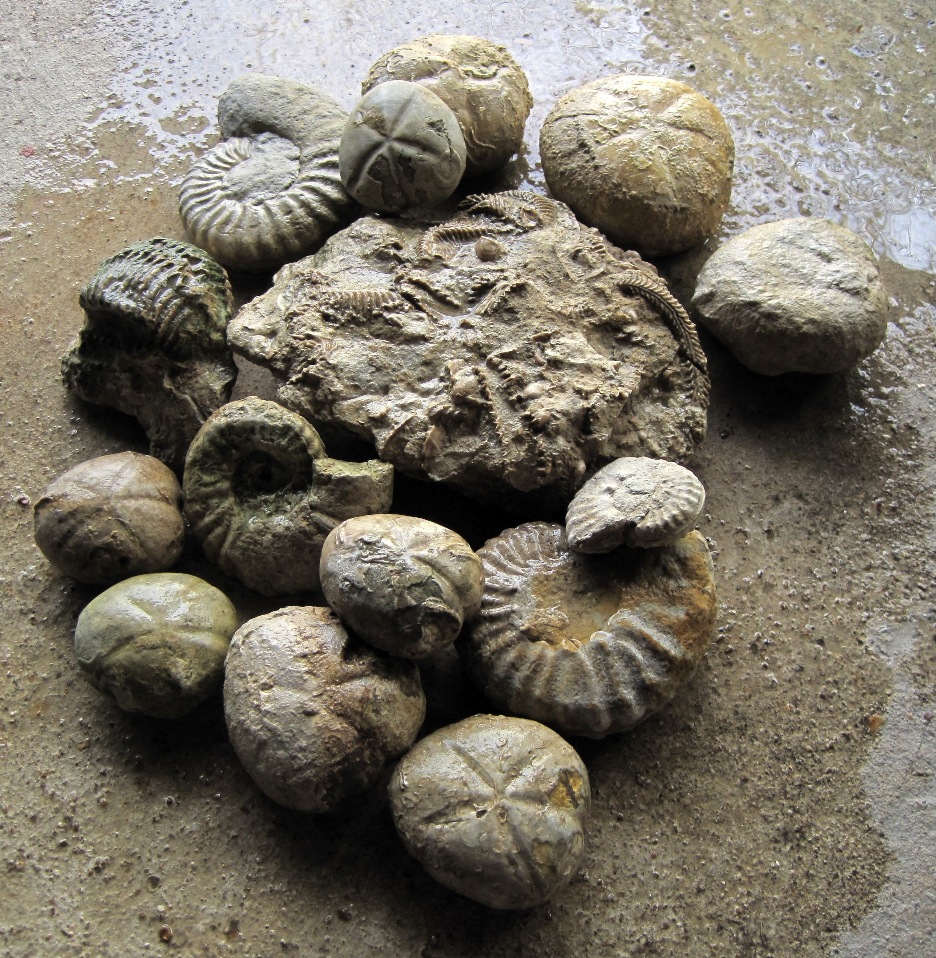 About mid-afternoon, we had a nice load of fossils in the boat, so we headed for the take-out. On the way, I contemplated a few options to round out the day. Then I remembered the fresh excavation on the morning drive. So we loaded up and headed that way.

Upon arrival, I realized the site was not as large as it appeared earlier in the day. A utility easement near the road had been reshaped by a bulldozer. In the course of their work, they had cleared a large ditch and exposed the local geology. We thought we would give it a quick look to see what formations were present. Bob walked slightly ahead of me as we descended into the shallow water. Sticky yellow clay and a few Ilymatogyra arietina oysters stuck to my shoes. Then, I froze.

“No way...you’ve got to be kidding,” I uttered. Bob turned and responded, “What?” I looked up at him from where I had dropped to my heels, “I’m about 90% sure this is ivory…mammoth ivory! It’s part of a tusk!” My heart pounded as I looked just below the water at its fragmented surface. Silt covered most of the concentric layers, but I recognized the fragmentation pattern from previous tusk finds. We pulled out our cameras and began the preliminary documentation. 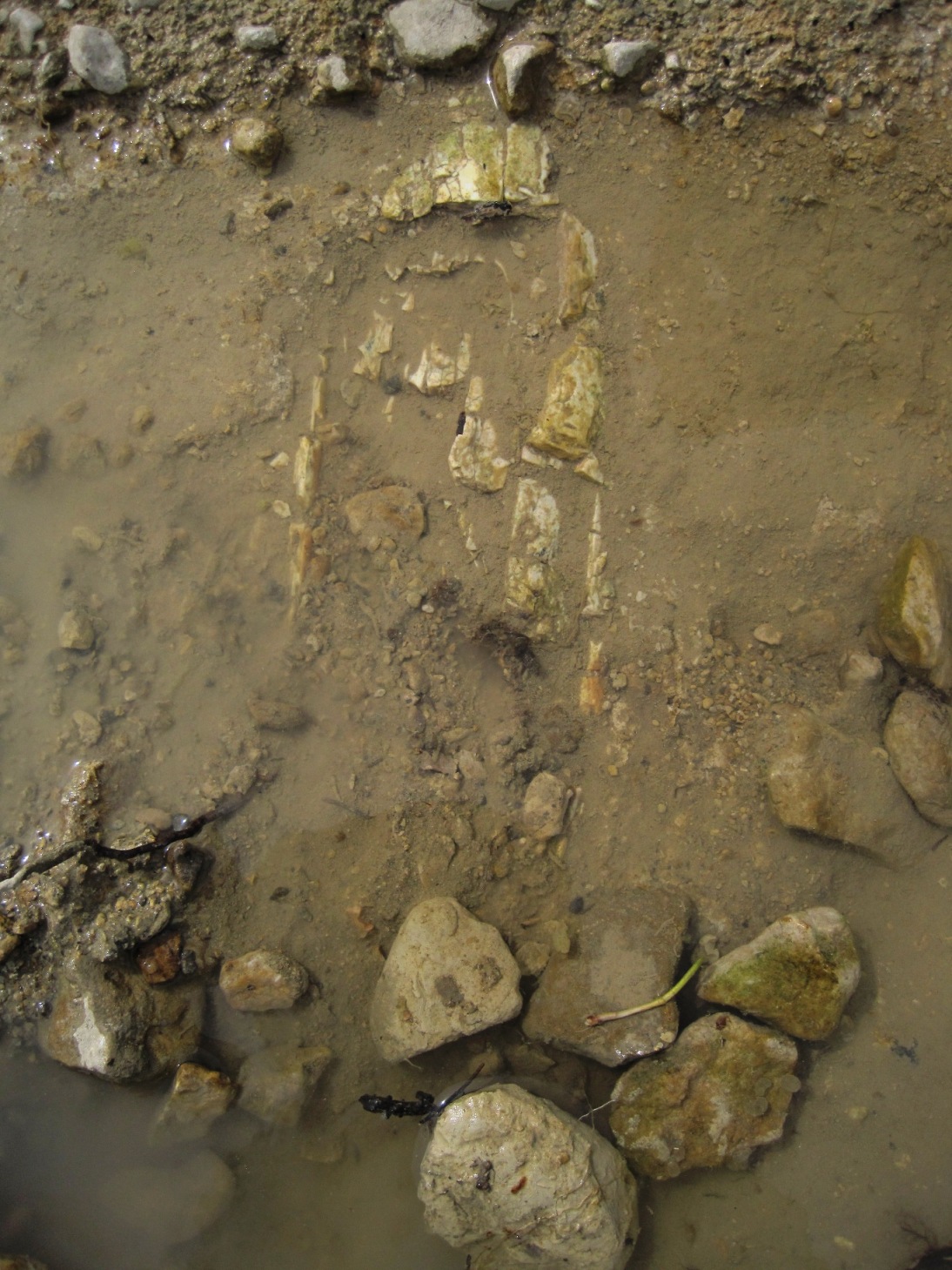 It was late afternoon, and I did not know the size of the find. But another problem was more obvious; the shallow water clouded with the touch of a finger. The clay appeared to be reworked Grayson marl (Del Rio Clay), so it would not be hard to excavate. However, the Pleistocene gravels scattered within it would make any digging awkward. After sizing up our options, we decided to get creative with the water to maintain visibility. Bob generously labored to keep clear water flowing across the area I slowly excavated with my knife and rock hammer. Working in the silty water was slow and frustrating. There were moments I just used my hands to ease away the gravel and clay. I thought I could expose the end of the tusk in a short time; but as the sun descended lower on the horizon, the realization that I might not, began to sink in. 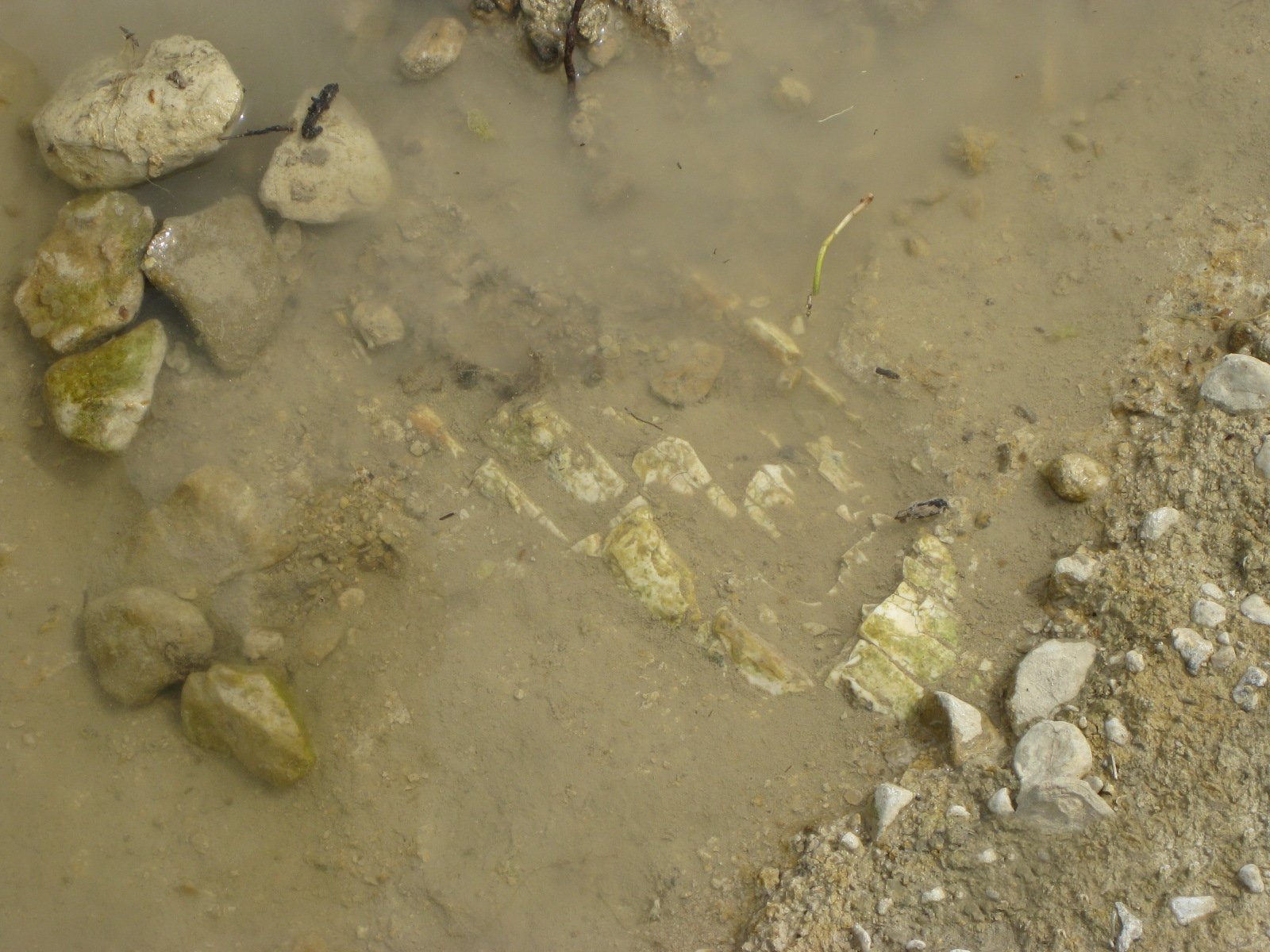 Late in the day, we took our final series of photos. The long shadows and tired muscles signaled the moment to make some tough decisions. There were about three feet of tusk exposed and it was all underwater. It was extremely fragile. To try to remove it would have destroyed it. So, I made the decision to carefully cover it up. Although it was a difficult choice, given the circumstances, I thought it was the right one. To excavate it properly would require drier times or a small coffer dam, plaster, reinforcement, and more tools. Even if it was removed under the best conditions, the final preparation would be a huge challenge. It was time to call in ‘the troops'.

Cloudy water was a constant problem 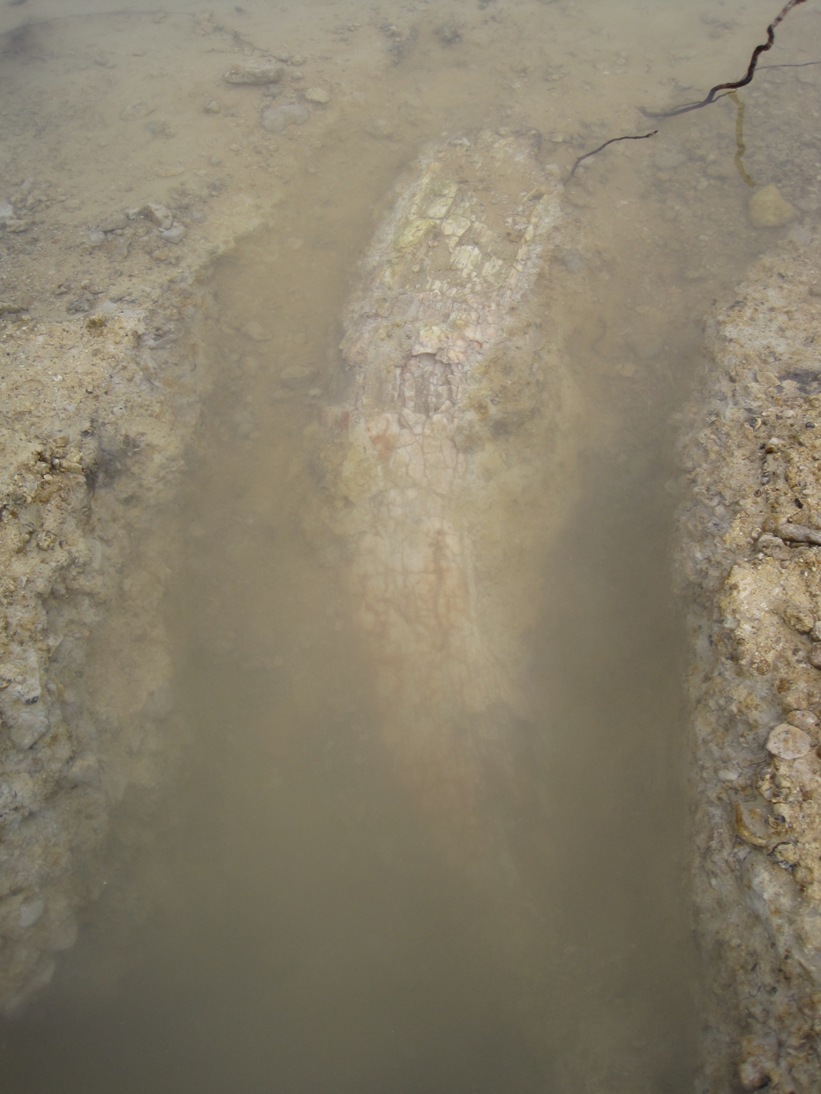 Roots penetrated one end of the tusk 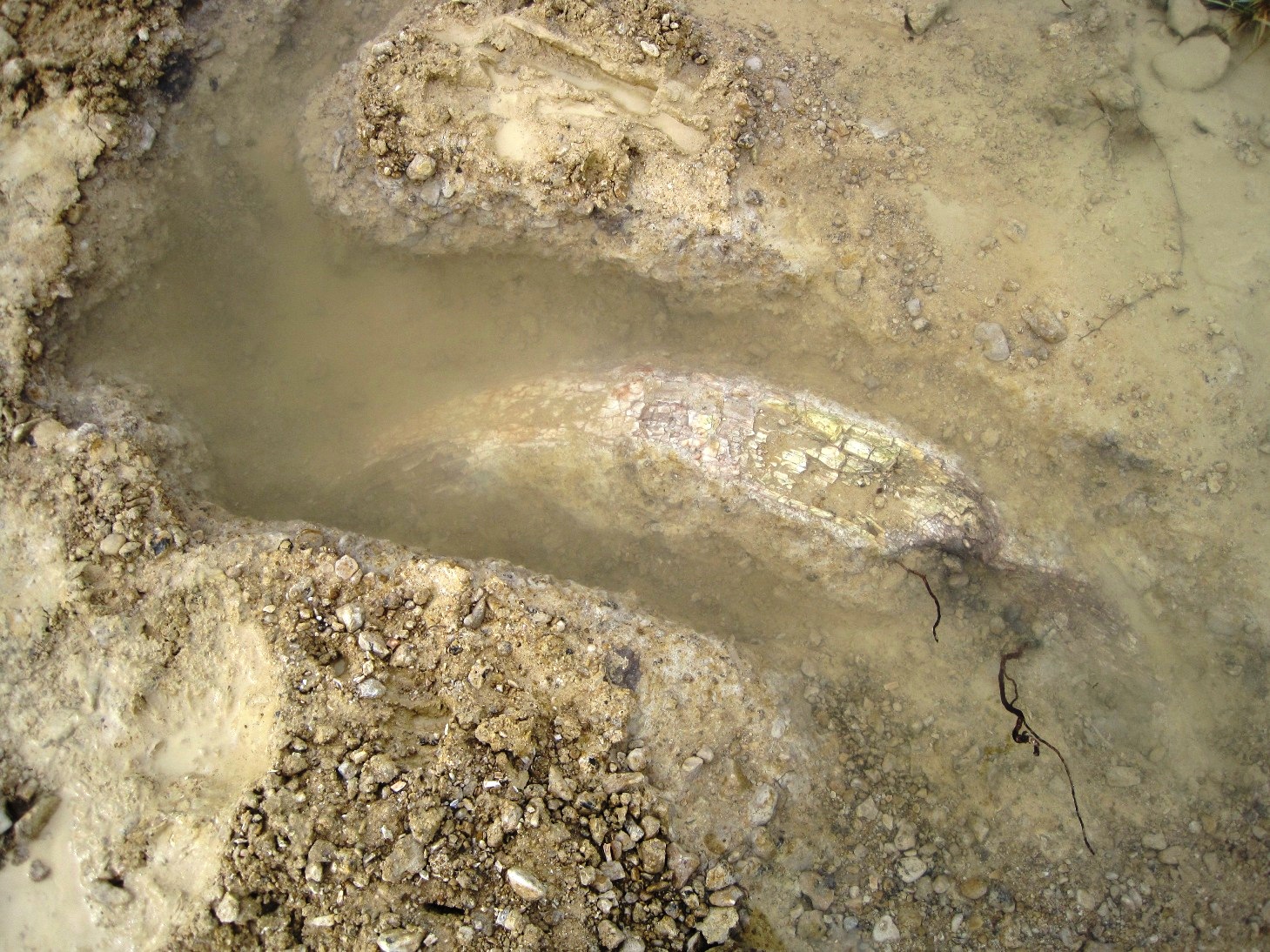 Angling downward into the clay and gravel 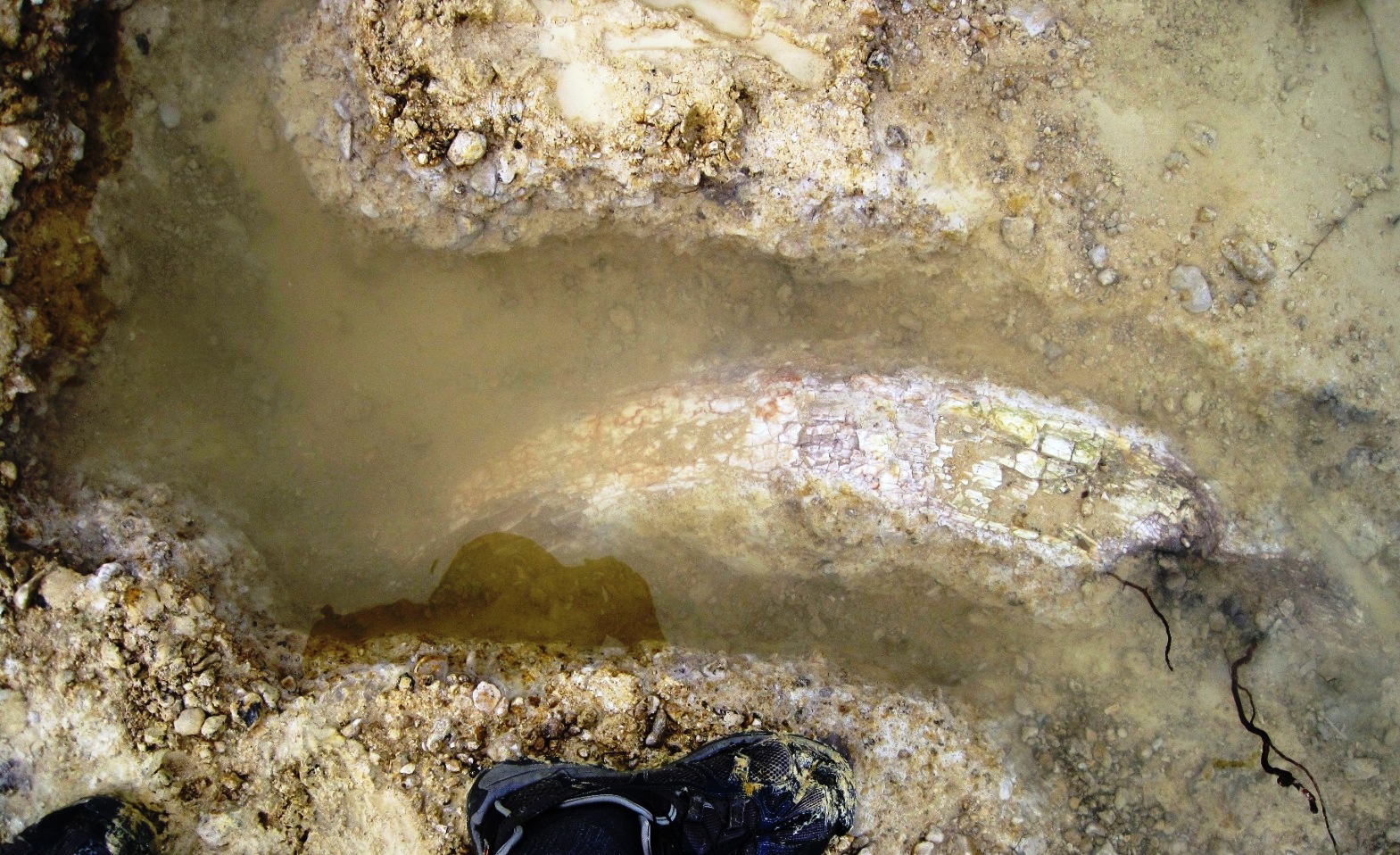 Bob and I discussed tentative plans to find someone to lead a future excavation. Then, I graciously thanked him for his efforts and, with a handshake on a day well spent, we parted company. During the long drive home, I called a couple of friends for assistance with the new ‘tusk project’ and gathered more leads to follow up. What a memorable day! I called my wife and told her we got a little sidetracked on the way home...when she heard ‘why’ she said, “You’ve got to be kidding!”

June 2010 Postscript:
At the end of April, after speaking and corresponding with several universities and groups, I was finally able to find an organization to take on the ‘tusk project’. They have contacts within the paleontology department of a local university and they hope to use the dig as a training opportunity. The question on everyone’s mind: Are there bones associated with the tusk? Organizing a university dig takes a little time. Nevertheless, this story will have another chapter in the future.