In a number of recent posts to the Forum I have complained incessantly about my inability to locate microfossils here in my home state of Arizona. Well, no more! A sample that I processed over the weekend produced a few nice ostracodes, and I am optimistic about finding more. The locality is the well-known Kohl Ranch site, just northeast of Payson, Arizona, reputed to be the best spot for collecting invertebrate fossils in the state. The material comes from the "beta" member of the Naco Formation, a purplish, siliciclastic mudstone of Middle Pennsylvanian (Desmoinesian) age. The megafossils of this locality were listed by Brew and Beus (1976), and thirteen species of ostracodes were listed by Lundin and Sumrall (1999). (Several other publications deal with more specialized aspects of the fauna.) The reported fauna is representative of an offshore, shallow, marine environment, probably less than 20 meters in depth. (Brew and Beus 1976: 889) 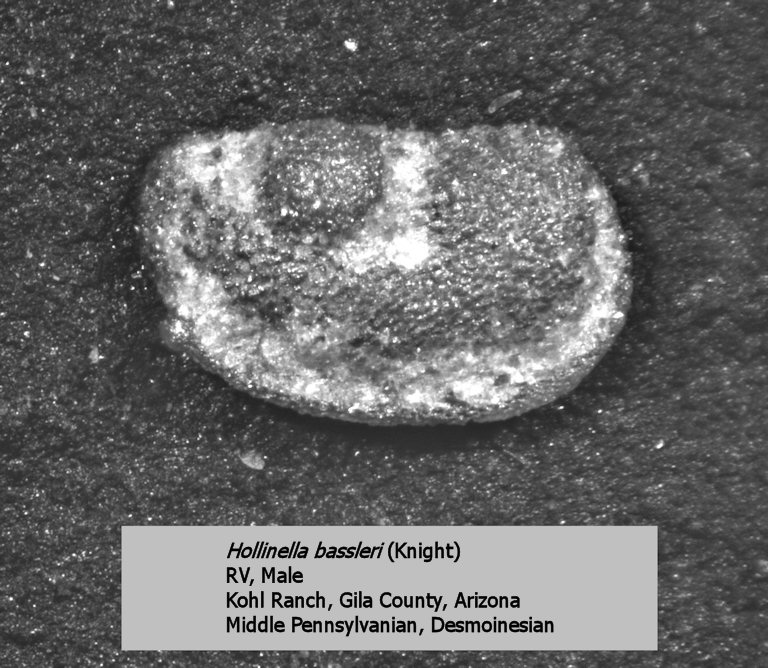 Two of the better specimens are shown in the attached photos. Both are complete single valves, and are partially pyritized. The male valve is a bit better preserved than the female, but both are adequate to show the basic features of the species -- which is the commonest one found in this particular sample. The ventral frill (velum) of the male is smaller, with a smaller posterior spine. The frill of the female is larger and incurved, presumably to form a brood pouch. This type of velum is characteristic of the family Hollinidae, although the various genera exhibit it in different degrees of development.

The remaining matrix on these specimens certainly detracts from their appearance, and I am going to try further cleaning with kerosene. Thus far the sample has simply been boiled with some sodium bicarbonate.

It is interesting that no other microfossils have been found in this formation. Although fusilinids are reported, I have seen no other forams at all, nor have I seen any conodonts.

A future entry in this blog will present some photos of the locality.