In picking out my sample of microfossils from the Middle Pliocene Coralline Crag Formation, Suffolk, England, I noted a few fragments of what appeared to be a species of the ostracode genus Pterygocythereis, a particularly spiny-looking genus of the family Trachyleberididae. I assumed it to be Pterygocythereis jonesi (Baird, 1850), the common species of the North Sea. As luck would have it, while finishing the picking of the last bit of the sample, up popped a complete valve, in almost perfect condition. 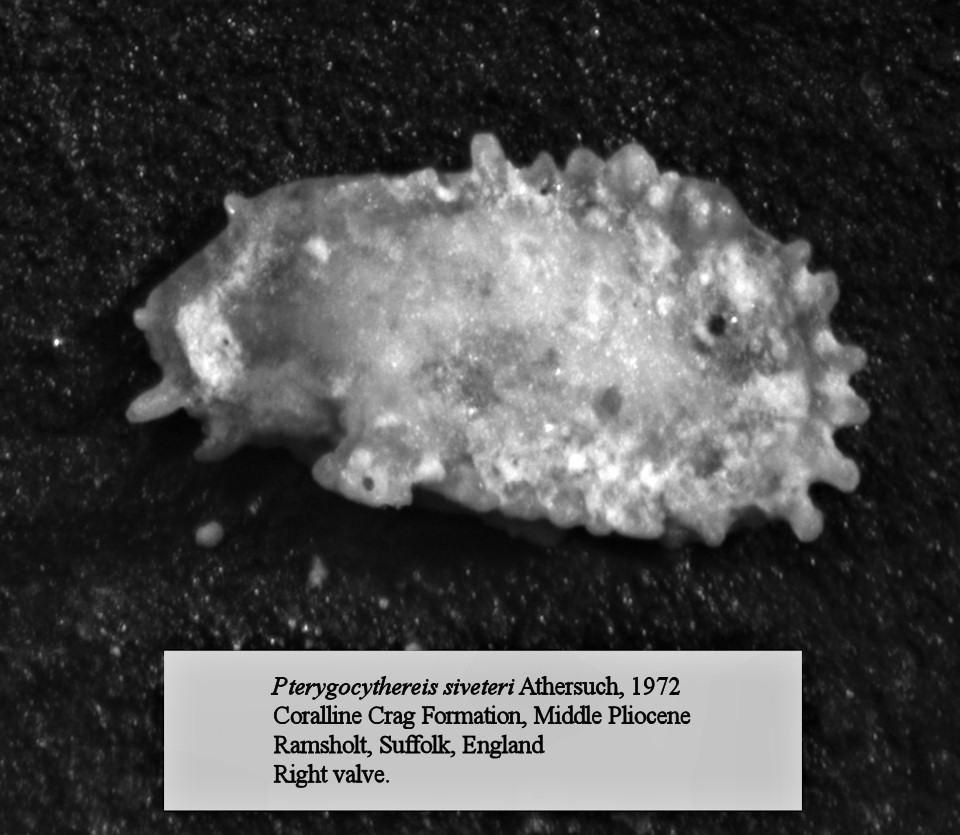 To my surprise, it turned out not to be the common North Sea species; rather, it is Pterygocythereis siveteri Athersuch, 1972. The image does not do it justice, as even with image stacking software, the great length of the alae and the 3-D spininess are not very apparent. (Published dorsal views of the complete carapace are quite impressive!) Further cleaning of the specimen should greatly improve its appearance.

In the standard book on the recent Ostracoda of Great Britain, we find the following: "British records of P. siveteri are sub-Recent, and there are, as yet, no live records outside the Mediterranean." (Athersuch, Horne and Whittaker 1989: 146) Presence of this species thus provides further evidence that the Middle Pliocene sea around southern Great Britain was warmer than it is now, and that the ostracode fauna was essentially Lusitanian, characteristic of the modern Mediterranean Sea and of the Atlantic Ocean off the northwest coast of Africa.

The genus Pterygocythereis today is commonly encountered in the sublittoral zone, down to a depth of about 200 meters. Faunal studies of the Coralline Crag have suggested that it was deposited in a high energy environment with a maximum depth of about 20 meters, which seems to fit. However, this species is rather rare in the Coralline Crag, suggesting that it may not have been a member of the original, local biocoenosis.