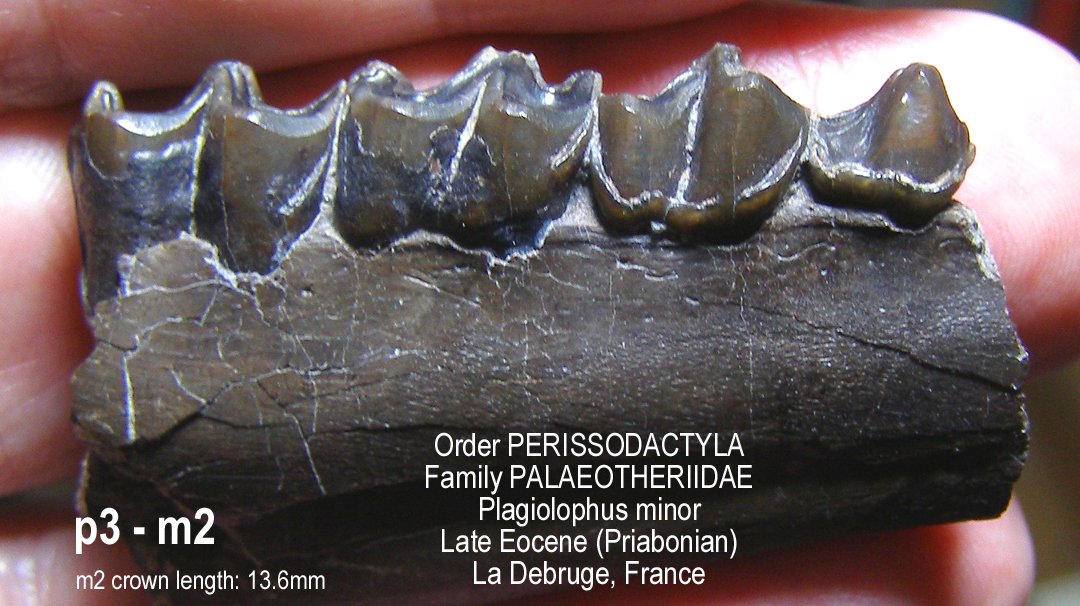 Plagiolophus (and sister taxa) are palaeotheres, a successful and variable family of perissodactyls (horses, rhinos, tapirs, et. al.) in the Eocene of Western Europe. Not true horses, palaeotheres may be the ancestors of horses. Plagiolophus represents one genus of palaeothere, extinct since the Oligocene. Plagiolophus minor, a browser, was the only member of its family to survive more than fleetingly the mammalian faunal turnover, the "Grande Coupure," which occurred during the earliest Oligocene in Europe.

La Debruge is one of about 15 terrestrial faunas (fossil remains of all kinds: plants, aquatic and terrestrial invertebrates, microfossils, vertebrates, mammal footprints) in the Apt-Forcalquier-Manosque basin in the French Alps. (Apt is a small town and is an administrative center of the Vaucluse district.) It is a mostly-paleogene basin with no outflow that accumulated siliciclastic alluvial sediments along with calcareous deposits in fluctuating shallow lakes.

The Paleogene of the basin starts in the Late Eocene with a coastal plain to supratidal flat environment temporarily covered by salt lakes or flood plains and progresses further to a truly closed lacustrine drainage basin towards the Early Oligocene. The Oligocene broadly saw the development of a fluctuating fluvial/lake-system with calcareous, clay and siliciclastic deposits.

Many mammals and other vertebrate fossil remains are known from this period all over the region. The Neogene (Miocene) saw a return to marine conditions with the Burdigalian transgression, leaving large thicknesses of sediments from erosion of the rising Alp Mountains.

The Late Eocene of the basin is known worldwide for the "La Débruge" mammal fauna serving as a reference locality to the European biochronological timescale. The La Debruge reference level zone is Priabonian (37.2 - 33.9 Ma). The La Débruge fauna slightly precedes the Grande Coupure event which saw a renewal of worldwide faunas at the Eocene-Oligocene boundary.

The very abundant fossils of the La Débruge fauna were found in an organic-rich deposit indicating a pond-like environment. The sediments are blackish and slightly sandy marls. Contrary to an earlier report, the fossiliferous level contains no lignite. The fossiliferous layer is about 50 cm (~20 inches) thick.

Since 1987, the basin has been protected as the Parc Naturel du Luberon.