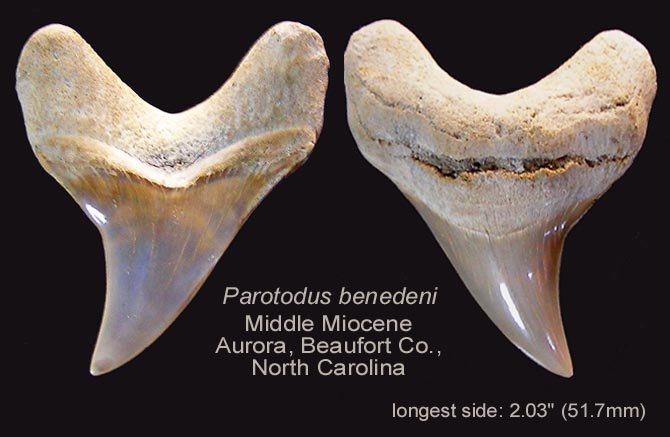 The genus Parotodus: the false mako shark. – Abstract: Living in the shadow of megalodon that roaming the Neogene seas, Parotodus benedenii, another supposedly large representative of the Otodontidae family, seems to have preferred, at the same time, the large ocean spaces, if we rely on the high frequency of its teeth in the abyssal deposits of the Indian Ocean and the Pacific. Its rarity in the terrestrial deposits makes it, for the collectors, a mythical species whose disappearance seems to be concomitant with that of its famous cousin Otodus (Megaselachus) megalodon. . . . We present this less publicized shark, which belongs to the extinct genus Parotodus, which has long been classified in the genus Oxyrhina, the former name of makos sharks [today nomen nudum], and for this reason still sometimes called “fake mako”.

The first form described in the literature, Parotodus benedenii (LE HON 1871) is a large pelagic species, with a stratigraphic extension from Early Oligocene (Rupelian) to Pliocene. We report, for the first time, its presence in the French Neogene. During the Palaeogene, we find in Europe two other species that could be his direct ancestors, whose smaller teeth have prominent lateral and triangular denticles reminiscent of the genus Otodus. “Parotodus” pavlovi (MENNER 1928), with narrow teeth, is quite common in the Ypresian (Lower Eocene) deposits of the North Sea Basin; we also report his presence in the Ypresian of the Paris Basin. P. mangyshlakensis KOZLOV in ZHELEZKO & KOZLOV 1999, with wider and more massive teeth, seems to have mainly frequented the waters of Central Europe from Bartonian (Middle Eocene) to the lower Oligocene.

Recently, Nakatani et al. (2017) and Ward et al. (2017) described another species from the Oligocene of Japan, without naming it (Parotodus sp.) which, according to these authors, would be the direct ancestor of P. benedenii. The classification and phylogeny of taxa reported to Parotodus are still hotly debated subjects: the denticulate forms of the Palaeogene (“P.” pavlovi, P. mangyshlakensis) are habitually considered as the ancestors of the Neogene species (with the exception of Siverson & Lindgren, 2005), but their origin remains obscure: we underline here the many similarities with the Cretaceous genus Archaeolamna SIVERSON 1992 which tends to root the origin of Parotodus within Archaeolamnidae.