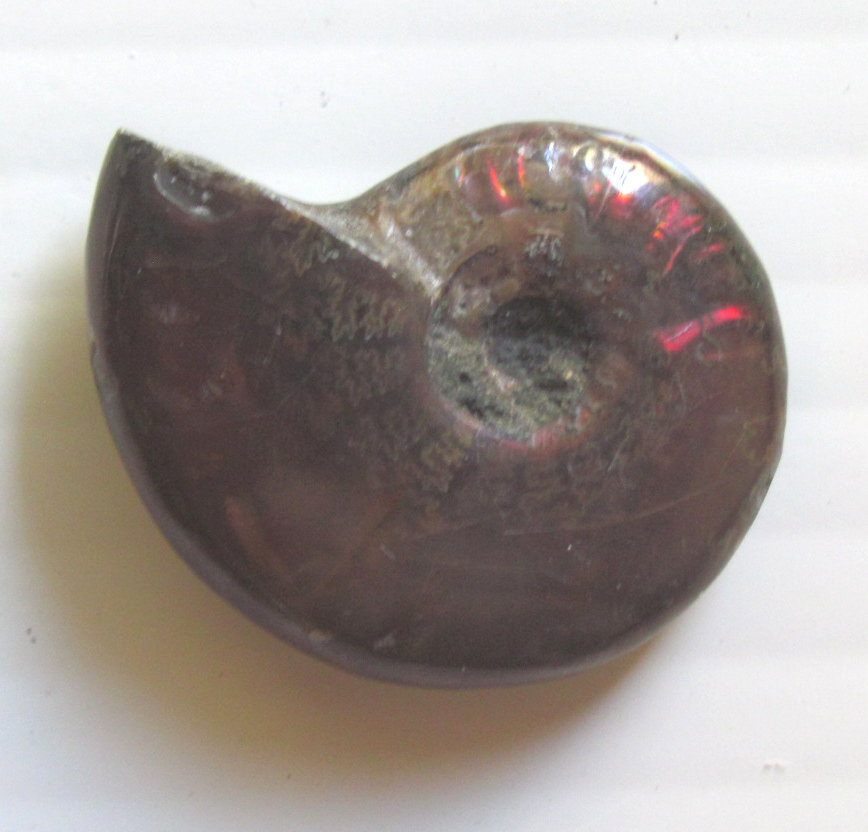 Madagascar, probably Mahajanga Province
Early Cretaceous period - Early Aptian (about 115 million years old)
Cleoniceras is a rather involute, high-whorled hoplitid from the Lower to basal Middle Albian of Europe, Madagascar, and Transcaspian region. The shell has a generally small umbilicus, arched to acute venter, and typically at some growth stage, falcoid ribs that spring in pairs from umbilical tubercles, usually disappearing on the outer whorls. Ammonoids are an extinct group of marine mollusc animals in the subclass Ammonoidea of the class Cephalopoda. These molluscs are more closely related to living coleoids (i.e., octopuses, squid, and cuttlefish) than they are to shelled nautiloids such as the living Nautilus species. The earliest ammonites appear during the Devonian, and the last species died out during the Cretaceous–Paleogene extinction event. Ammonites are excellent index fossils, and it is often possible to link the rock layer in which a particular species or genus is found to specific geologic time periods. Their fossil shells usually take the form of planispirals, although there were some helically spiraled and nonspiraled forms (known as heteromorphs). The name "ammonite", from which the scientific term is derived, was inspired by the spiral shape of their fossilized shells, which somewhat resemble tightly coiled rams' horns. Pliny the Elder (d. 79 AD near Pompeii) called fossils of these animals ammonis cornua ("horns of Ammon") because the Egyptian god Ammon (Amun) was typically depicted wearing ram's horns. Often the name of an ammonite genus ends in -ceras, which is Greek for "horn". Ammolite is an opal-like organic gemstone found primarily along the eastern slopes of the Rocky Mountains of North America. It is made of the fossilized shells of ammonites, which in turn are composed primarily of aragonite, the same mineral contained in nacre, with a microstructure inherited from the shell. It is one of few biogenic gemstones; others include amber and pearl. Ammolite comes from the fossil shells of the Upper Cretaceous disk-shaped ammonites Placenticeras meeki and Placenticeras intercalare, and (to a lesser degree) the cylindrical baculite, Baculites compressus. Ammonites were cephalopods, that thrived in tropical seas until becoming extinct along with the dinosaurs at the end of the Mesozoic era. Other fossils, such as many found in Madagascar and Alberta, display iridescence. These iridescent ammonites are often of gem quality (ammolite) when polished. In no case would this iridescence have been visible during the animal's life; additional shell layers covered it.
Kingdom: Animalia
Phylum: Mollusca
Class: Cephalopoda
Order: Ammonitida
Family: Hoplitidae
Genus: Cleoniceras