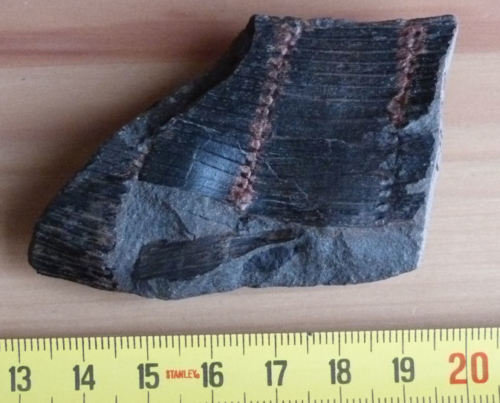 SITE LOCATION: Westphalian deposits in the area around Mons in Belgium
TIME PERIOD: Carboniferous (311-315 Million Years Ago)
Data: Calamites is a genus of extinct arborescent (tree-like) horsetails to which the modern horsetails (genus Equisetum) are closely related. Unlike their herbaceous modern cousins, these plants were medium-sized trees, growing to heights of more than 30 meters (100 feet). They were components of the understories of coal swamps of the Carboniferous Period (around 360 to 300 million years ago). A number of organ taxa have been identified as part of a united organism, which has inherited the name Calamites in popular culture. Calamites correctly refers only to casts of the stem of Carboniferous/Permian sphenophytes, and as such is a form genus of little taxonomic value. There are two forms of casts, which can give mistaken impressions of the organisms. The most common is an internal cast of the hollow (or pith-filled) void in the centre of the trunk. This can cause some confusion: firstly, it must be remembered that a fossil was probably surrounded with 4-5 times its width in (unpreserved) vascular tissue, so the organisms were much wider than the internal casts preserved. Further, the fossil gets narrower as it attaches to a rhizoid, a place where one would expect there to be the highest concentration of vascular tissue (as this is where the peak transport occurs). However, because the fossil is a cast, the narrowing in fact represents a constriction of the cavity, into which vascular tubes encroach as they widen. The trunks of Calamites had a distinctive segmented, bamboo-like appearance and vertical ribbing. The branches, leaves and cones were all borne in whorls. The leaves were needle-shaped, with up to 25 per whorl. Their trunks produced secondary xylem, meaning they were made of wood. The vascular cambium of Calamites was unifacial, producing secondary xylem towards the stem center, but not secondary phloem. The stems of modern horsetails are typically hollow or contain numerous elongated air-filled sacs. Calamites was similar in that its trunk and stems were hollow, like wooden tubes. When these trunks buckled and broke, they could fill with sediment. This is the reason pith casts of the inside of Calamites stems are so common as fossils.
Kingdom: Plantae
Phylum: Pteridophyta
Class: Equisetopsida
Order: Equisetales
Family: †Calamitaceae
Genus: †Calamites