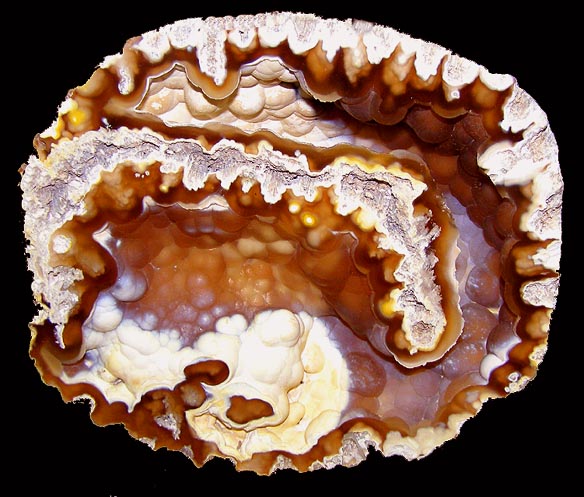 AGATIZED CORALS FROM THE TAMPA FORMATION OF FLORIDA

The Early Miocene (25mybp) Tampa Formation underlies much of Florida. It is composed of soft, highly-fossiliferous limestones intermixed with sand and clay., There are several widely-separated exposures of the Tampa limestones which produce silicified corals and mollusks, the best known of which is Ballast Point on Tampa Bay. Nearby exposures of the same formation, such as at Sixmile Creek on Tampa Bay, may produce only calcareous specimens.

Many of the corals, mollusks, and other taxa of the Tampa Formation with shells or skeletons of calcium carbonate have been subjected to complete or partial silicification. This replacement has produced specimens of considerable beauty and sometimes of faithfully reproduced pseudomorphs. Most often, the original calcareous structure has been partially or wholly dissolved, and the replacing silica obscures identification of the taxon.

The process of dissolution of the calcium carbonate and the precipitation of the cryptocrystalline quartz (chalcedony) in Ballast Point corals is described by Lund in his 1960 paper "Chalcedony and Quartz Crystals in Silicified Corals." Lund says of the corals:

The silicified coral masses from Ballast Point are of varying sizes and shapes. Some are globose and range up to a foot in diameter, some are tubular, and others are irregular in shape. Many of the masses are hollow, and the preserved 'shell' is characteristically comprised of two distinct layers. The outer layer consists of replaced coral in which the features [may be] preserved in remarkable detail, and the inner part consists of either banded chalcedony or banded chalcedony over which quartz crystals have grown. Most of the hollow forms are lined with colloform chalcedony, a few are lined with small quartz crystals, and less commonly specimens are partitioned and lined with both kinds of material, each in a separate chamber.

The origin of the dissolved silica is plants and animals such as diatoms, radiolarians, and silica-secreting sponges, as well as other siliceous matter occurring in the matrix. For more information see:

Weisbord, Norman E., New and Little-known Corals from the Tampa Formation of Florida; Bulletin No. 56, Florida Department of Natural Resources (1973).