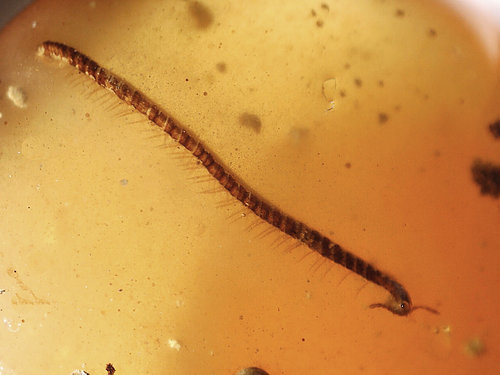 Burma
Cretaceous  Period (95 to 100  million years ago)
This piece measures 15 mm long by 15 mm wide by 4 mm thick. Millipede is 8 mm.  Millipedes are a group of arthropods that are characterised by having two pairs of jointed legs on most body segments; they are known scientifically as the class Diplopoda, the name being derived from this feature. Each double-legged segment is a result of two single segments fused together. Most millipedes have very elongated cylindrical or flattened bodies with more than 20 segments, while pill millipedes are shorter and can roll into a ball. Although the name "millipede" derives from the Latin for "thousand feet", no known species has 1,000; the record of 750 legs belongs to Illacme plenipes. There are approximately 12,000 named species classified into 16 orders and around 140 families, making Diplopoda the largest class of myriapods, an arthropod group which also includes centipedes and other multi-legged creatures. First appearing in the Silurian period, millipedes are some of the oldest known land animals. Some members of prehistoric groups grew to over 2 m (6 ft 7 in); the largest modern species reach maximum lengths of 27 to 38 cm (11 to 15 in). The longest extant species is the giant African millipede (Archispirostreptus gigas).
Kingdom: Animalia
Phylum: Arthropoda
Subphylum: Myriapoda
Class: Diplopoda