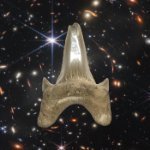 This kind of incisor-like ("incisorform") tooth was originally thought to have belonged to a large, Cretaceous mammal. Later discoveries revealed that these teeth were actually the front teeth ("premaxillary teeth") of Tyrannosaurs - and are now known as a hallmark of their clade, Tyrannosauroidea. Closely-spaced, parallel grooves on bones suggest that Tyrannosaurs used these teeth to scrape meat from bone. Given the size, this is from a juvenile animal (smaller than "Jane").

Should Nanotyrannus be valid, then this should be considered an indeterminate Tyrannosaurid.