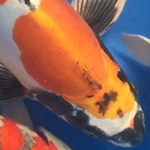 By Kikokuryu,
June 5 in Fossil ID