This report will introduce you to the ammonite-zones of Trachyceras aonoides and Trachyceras austriacum within the Hallstatt limestone in Austria. Both zones are ammonoid zones of the Julian, which is the lower stage of the Carnian. These two zones are comparable with the North American Desatoyense (in most parts), Obesum and Nanseni zone of the lower Carnian.

During a long lasting time of collecting every collector gets plenty of pictures which will be worth showing to a broader collecting community. In this report I will show you a few of these rare in situ pictures and in contrast pictures of prepared stuff. All exclusively from these zones of the Triassic Hallstatt limestone. 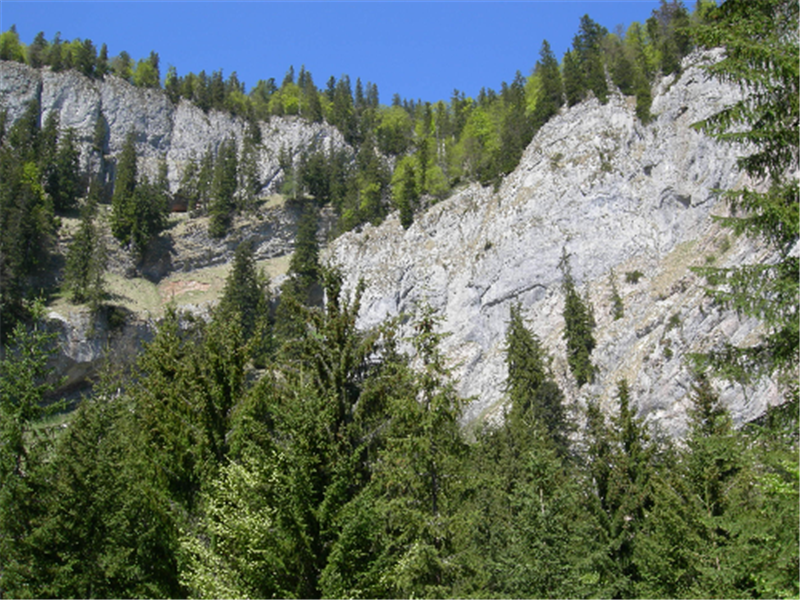 A snap shot of a typical Triassic area of the "Salzkammergut" in Austria.

Everyone should stop just looking at the ground. The fantastic landscape opens everyone's heart for sure. All rock, visible on the picture, is of Triassic age and could bear fossils. But it is much more difficult to find some fossils there in reality. The main parts of this limestone do not generally bear fossils (except microfossils).

In the Alpine Triassic "Hallstatt limestone" ammonites are generally not so common. The limestone is only partly enriched in some places with ammonoids, in so called "lenses" and fissure fillings. Often very small in size and therefore soon exploited.I have been search for 15 years in this limestone. The pictures shown here are highlights of 15 years of intensive collecting. In this limestone no prominent layers or horizons exist which can guarantee you shall find fossils. The next point is the alpine area. Hiking for hours to reach a location and perhaps find nothing isn't also everyones affair.

Hallstatt limestone deep swell facies originate from a stagnating and minimal rate of sedimentation. In the "Hallstatt limestone" the fossil lenses of the aonoides and austriacum zone were deposited in depressions / hollows or fissures of the former sea floor, which were the result of a highly mobile palaeomorphology and of a very strong condensation for a long time span. The thickness of the layers can reach from almost zero to a few meters. Only in some places the conditions were right for depositing fossils. To find these spots is the high art of collecting in this limestone. Such spots (hollows/depressions) of the paleo seafloor were enriched with ammonoids, bivalves, crinoid ossicles and other fossils by deep water currents. Because of the common lens shape (in cross-section) of these fossil accumulations they are now called fossil "lenses". This term was introduced by Mojsisovics in the 19th century.

Sometimes a more or less prominent marl layer (so called Reingraben shales=Carnian pluvial event) can separate the aonoides and the austriacum zone. In paleobasin areas the marls of the Reingraben shales can substitute the limestone facies of this time interval. The Ammonites within these lenses are mostly very well preserved by ferromanganese encrusting. Also observable is often a current alignment. In some spots I found big Johannites sp., Orthoceras sp. and big Nautiloids at the beginning of a lens, followed by middle sized ammonoids with sculpture(Trachyceras, Cladiscites, etc) in the more central part and at the end only Pompeckjites layeri (=smaller Carnian Pinacoceratidae) which were sloping towards each other. 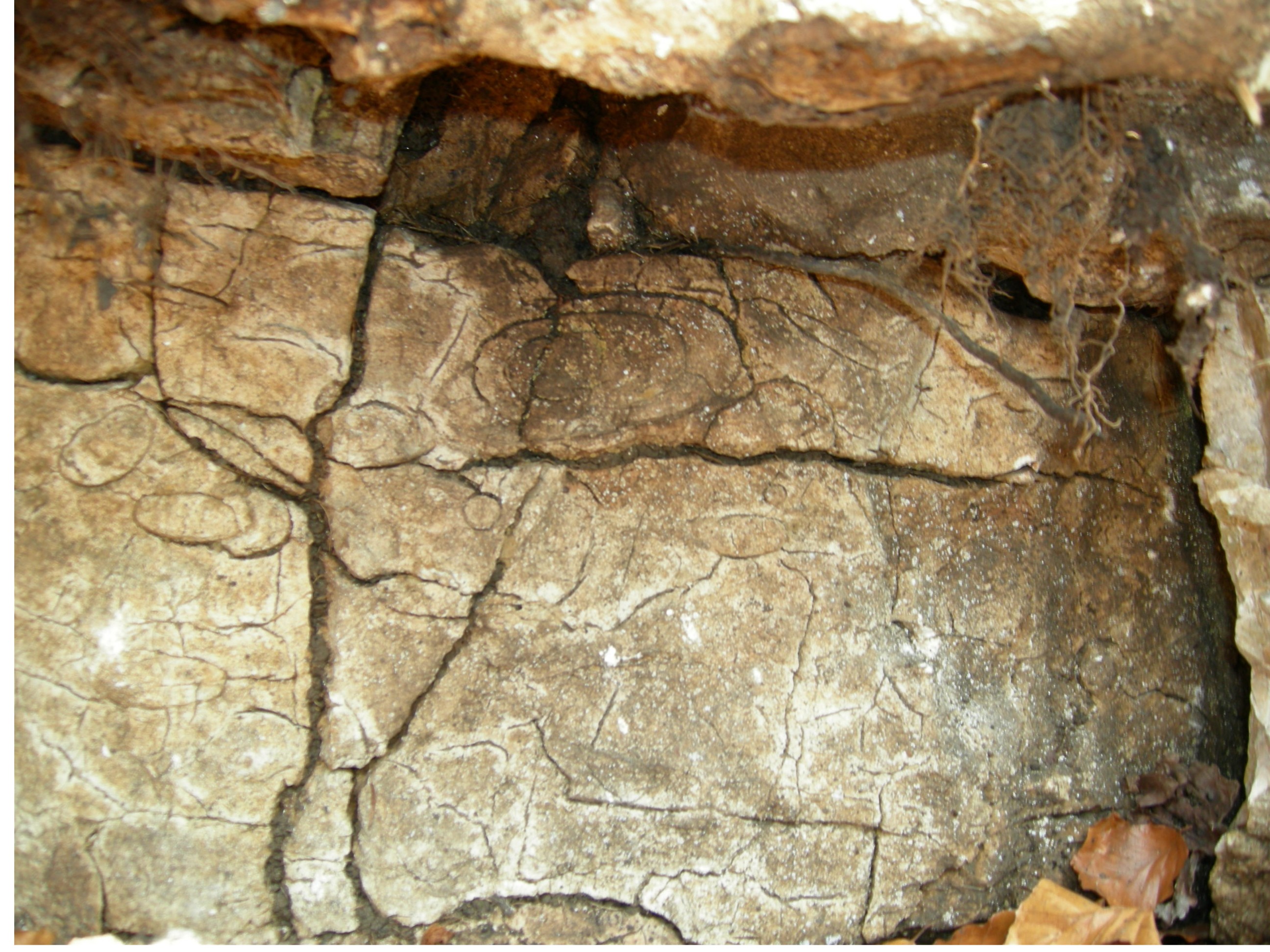 Outcrop of a fossil lens from the aonoides zone with visible ammonoid cross-sections and layers. The vertical fissures are of tectonic origin and it is often very helpful in collecting such spots because the thickness of such "lens" layers can reach up to 1m. Natural picture size is 50x30cm 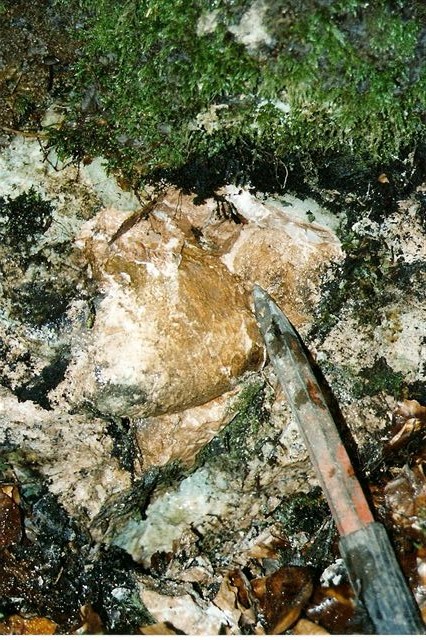 Nautilus sp. of the aonoides zone. You can imagine how difficult it is to find something in this mossy and overgrown rock. I found this location only by searching for the right rock feature of this zone. This helped me to border off a smaller area in which I looked very closely with my nose on the ground until I hit this lens. The years before I passed this place about 10 times or more but I didn't recognise even a trace of an ammonite there. 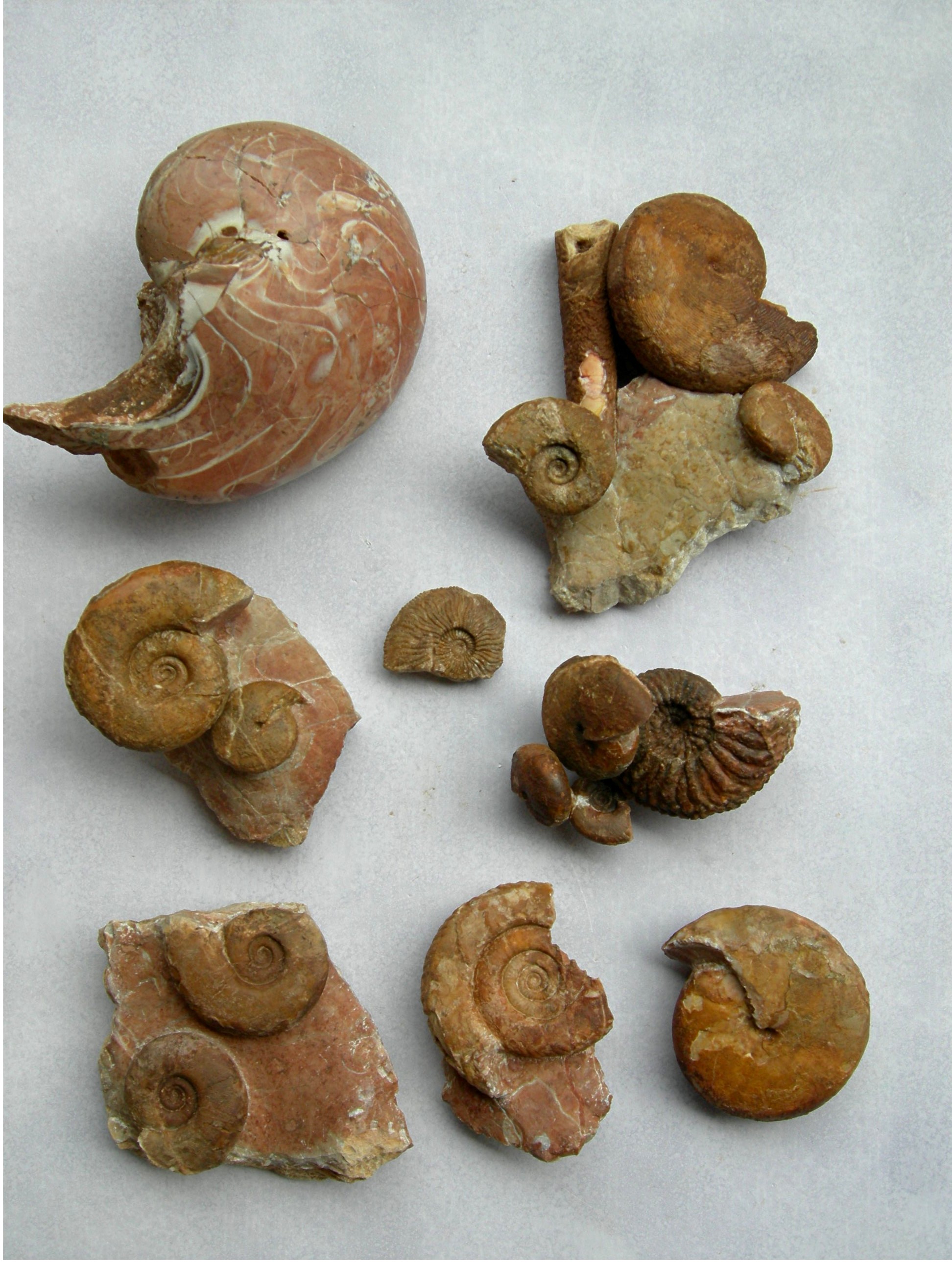 Ammonoids from the outcrop described above. The ammonoids come from the stratigraphically lower part of the aonoides zone. Exactly dated with conodonts. The polished Nautilus corresponds to the outcrop picture shown above. 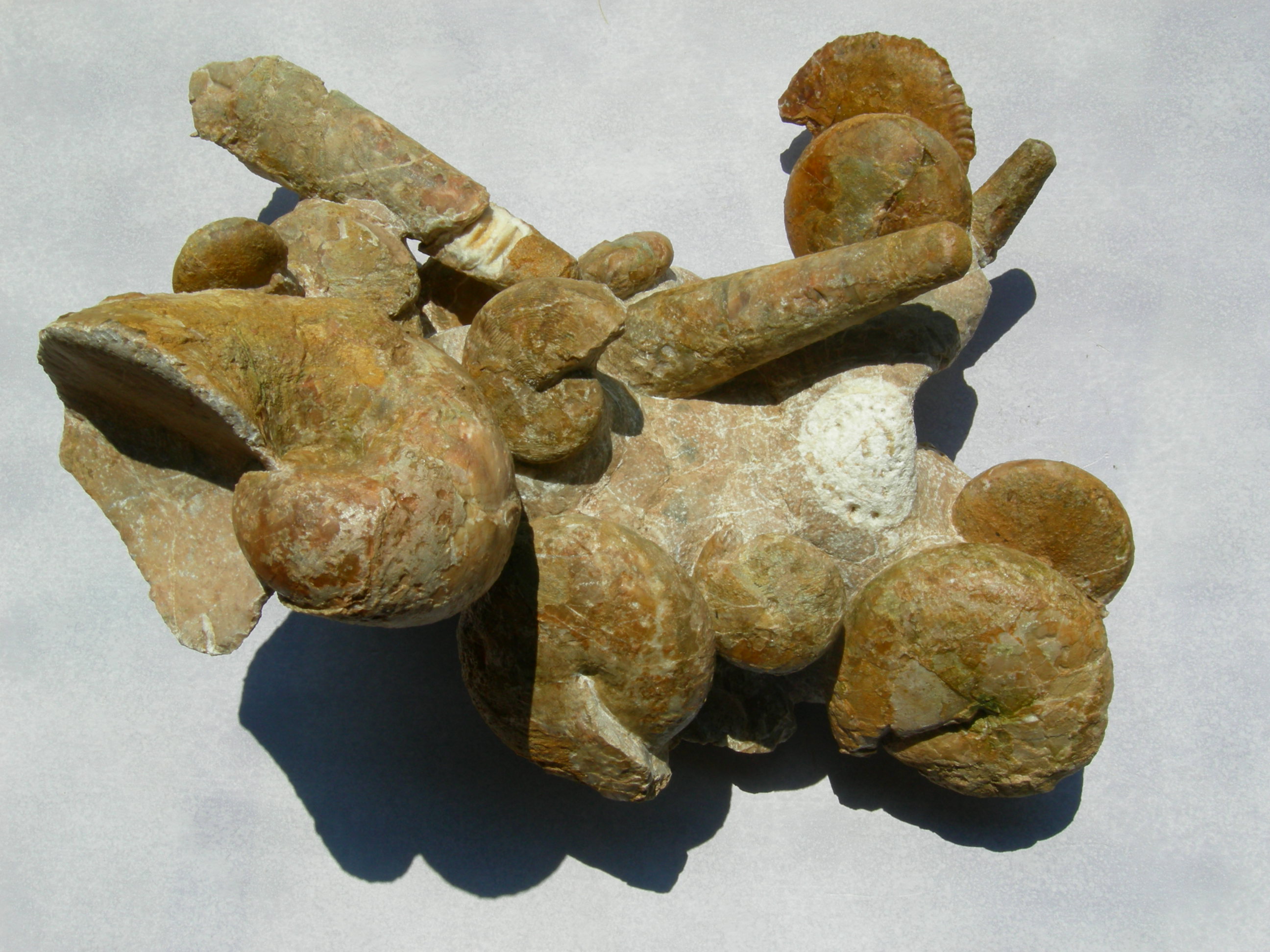 Prepared block with big Nautilus bullatus MOJS.( 25 cm) on the left side. A rough rule says that the greyer the limestone colour the worse is the preservation. But this must not be the case for every location. You can also imagine that the palaeo current came from the upper right side of the picture. 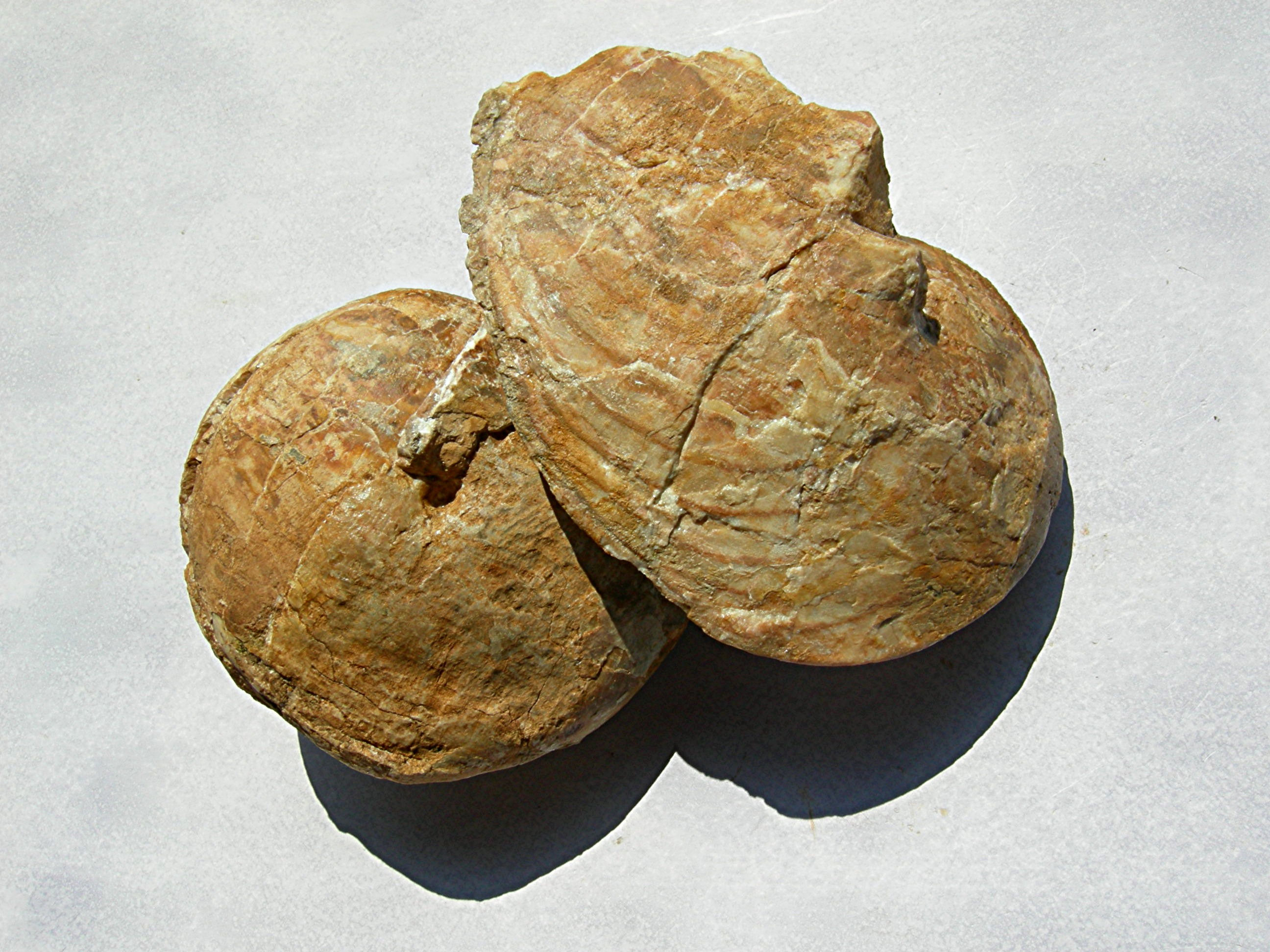 Big Nautilus galeatus MOJS. (28cm) with Johannites sp. from another ammonoid lens where big ammonoids were frequent but not so well preserved. 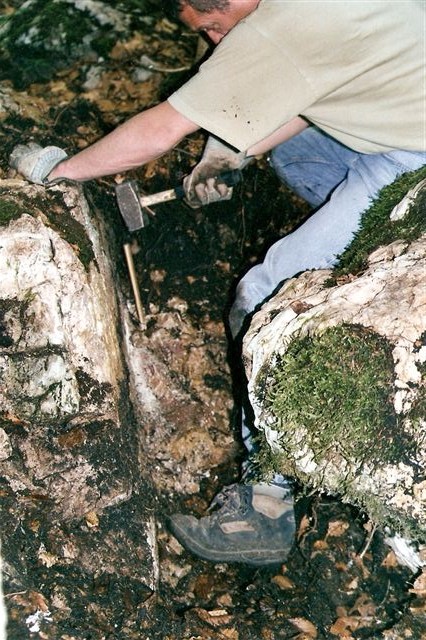 My former collecting buddy "Harry" (in action), working on a tectonically steeply tilted limestone succession of the aonoides+austriacum zone. Both zones were condensed at this spot to only 40cm. Harry stopped collecting 3 years ago because of personal reasons. We were thick as thieves for over 10 years long. View of the lens on which friend Harry is working. The ammonoids in there were very well preserved. This was the middle part of the above mentioned lens with the very scarce sculptured ammonites mostly known only from books. 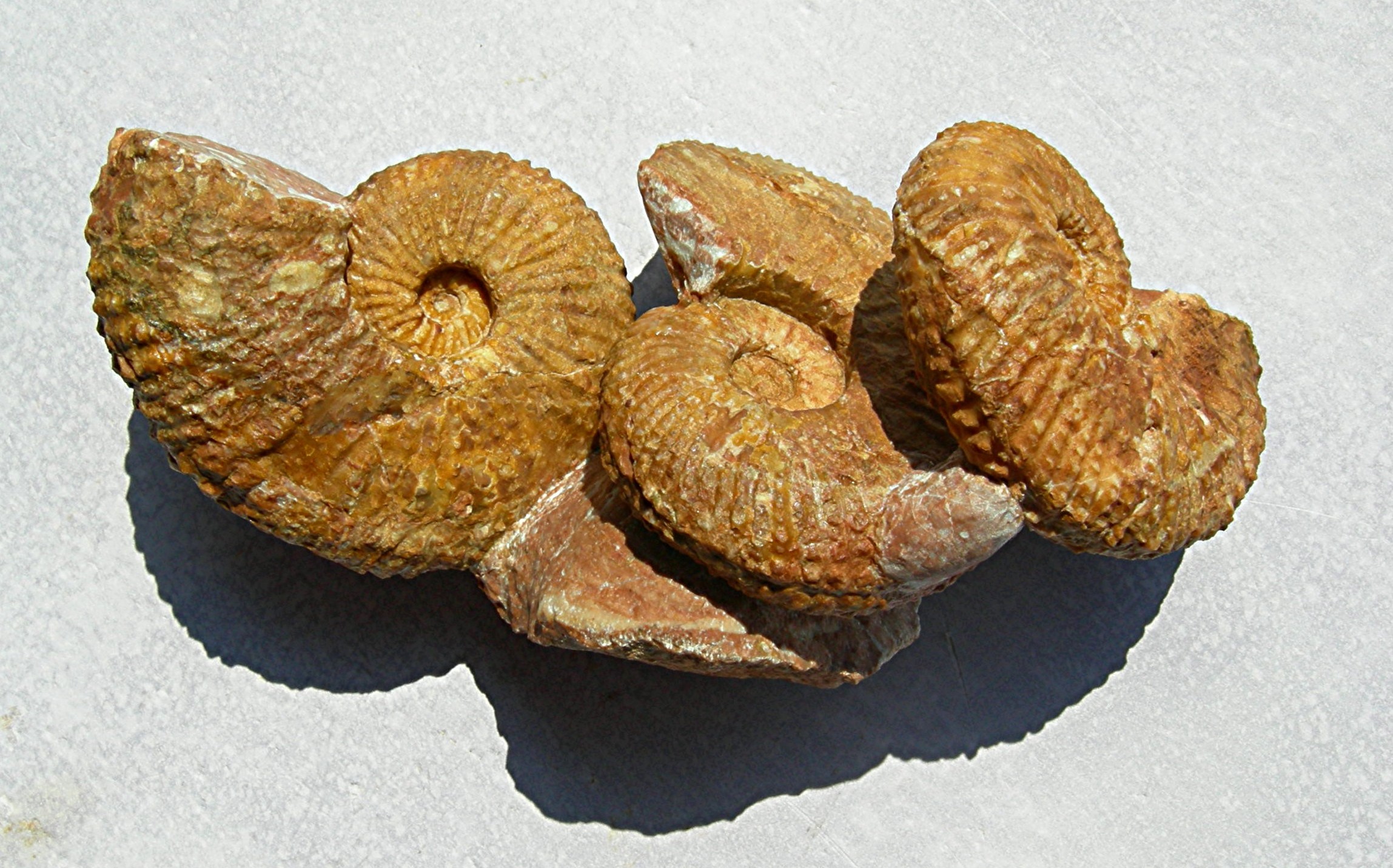 Three Austrotrachyceras cf. austriacum from this part of the lens.

Snapshots of another dig in the aonoides zone. 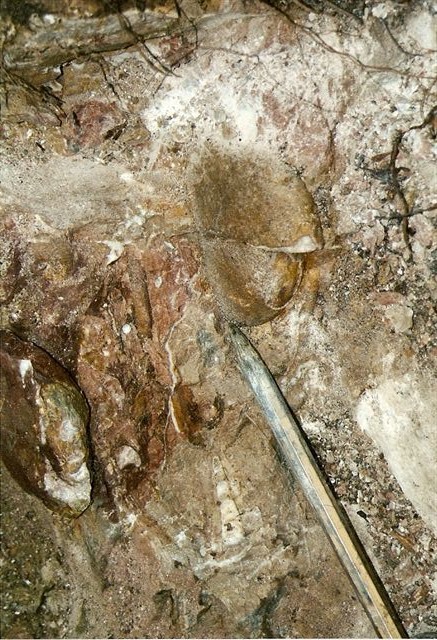 "It will be good" 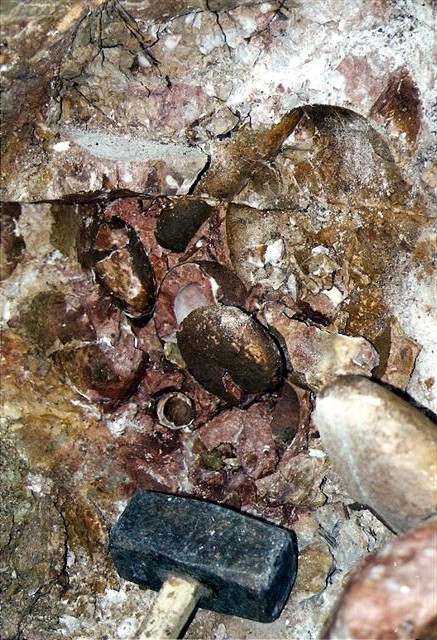 "It is good" a few minutes later 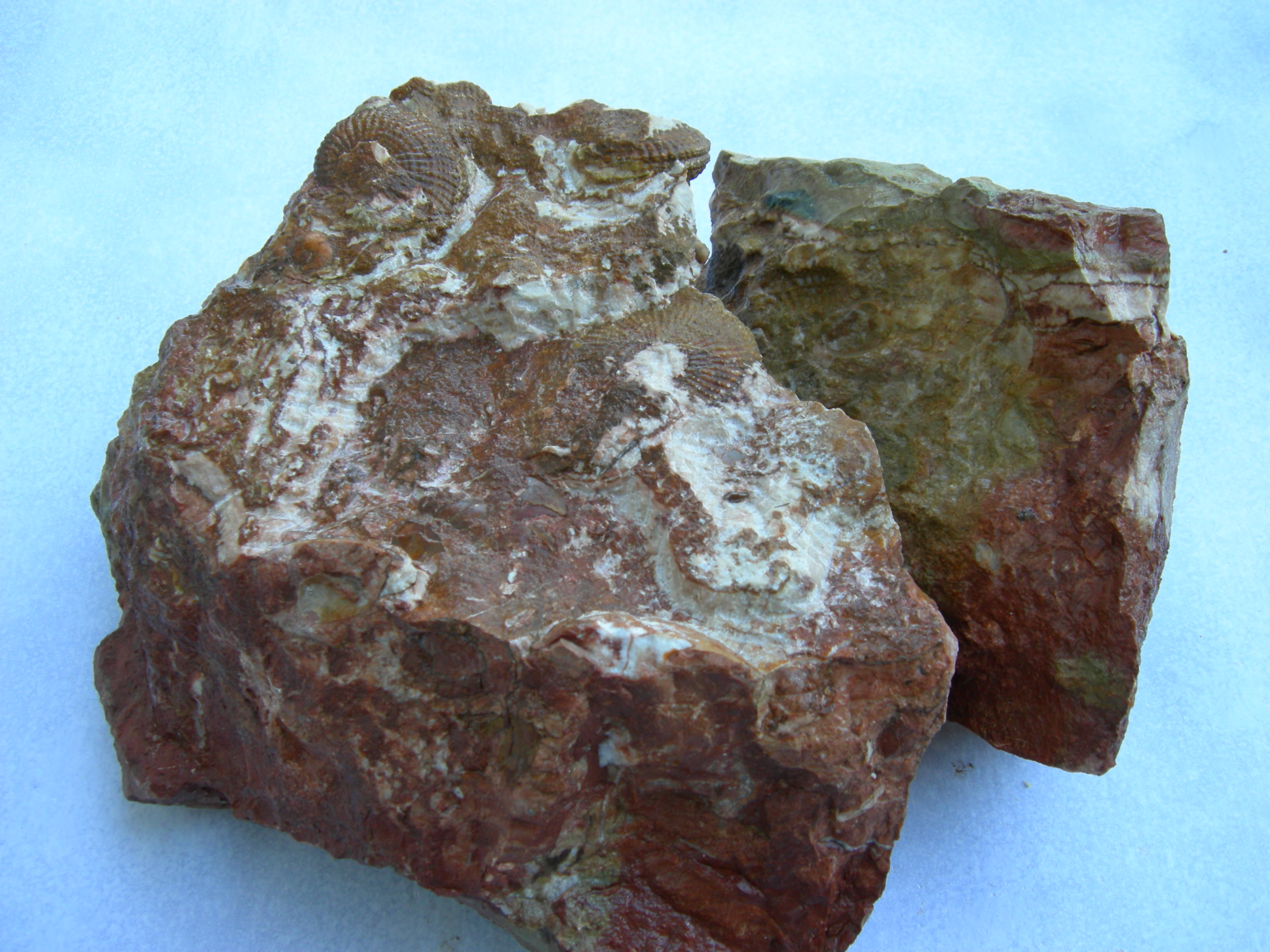 Block of the austriacum zone after 2 hours of preparation 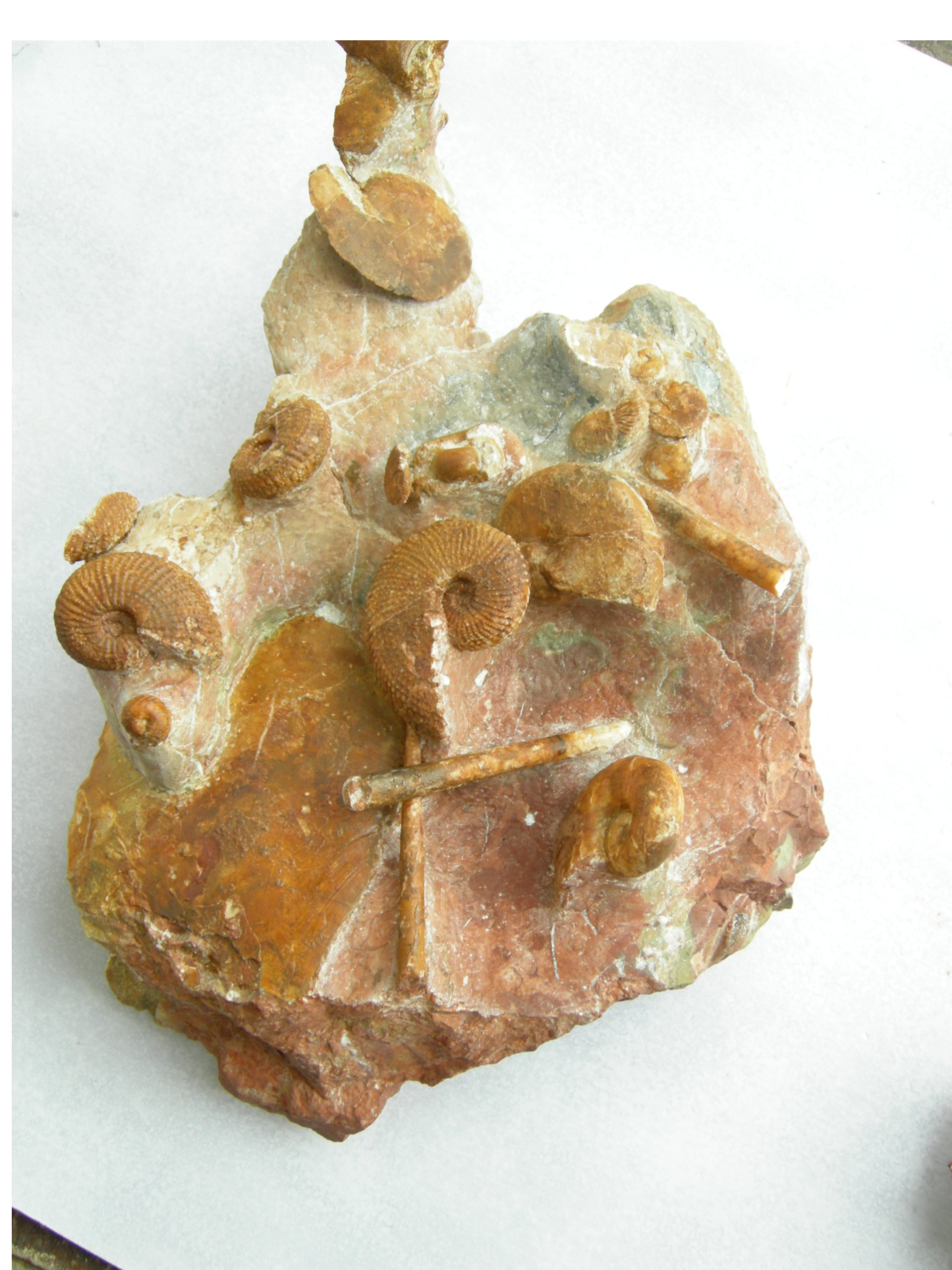 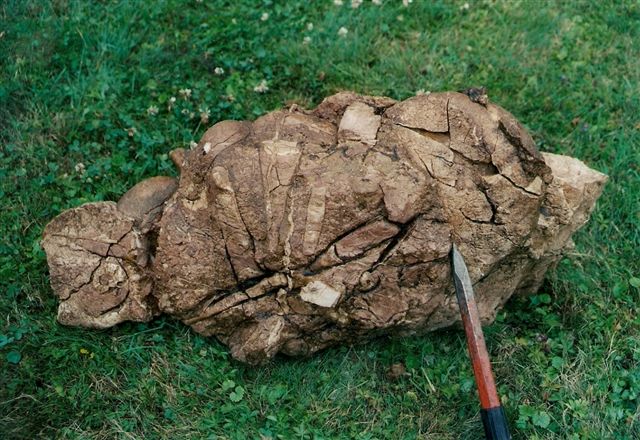 Only washed block from a lens of the aonoides zone. 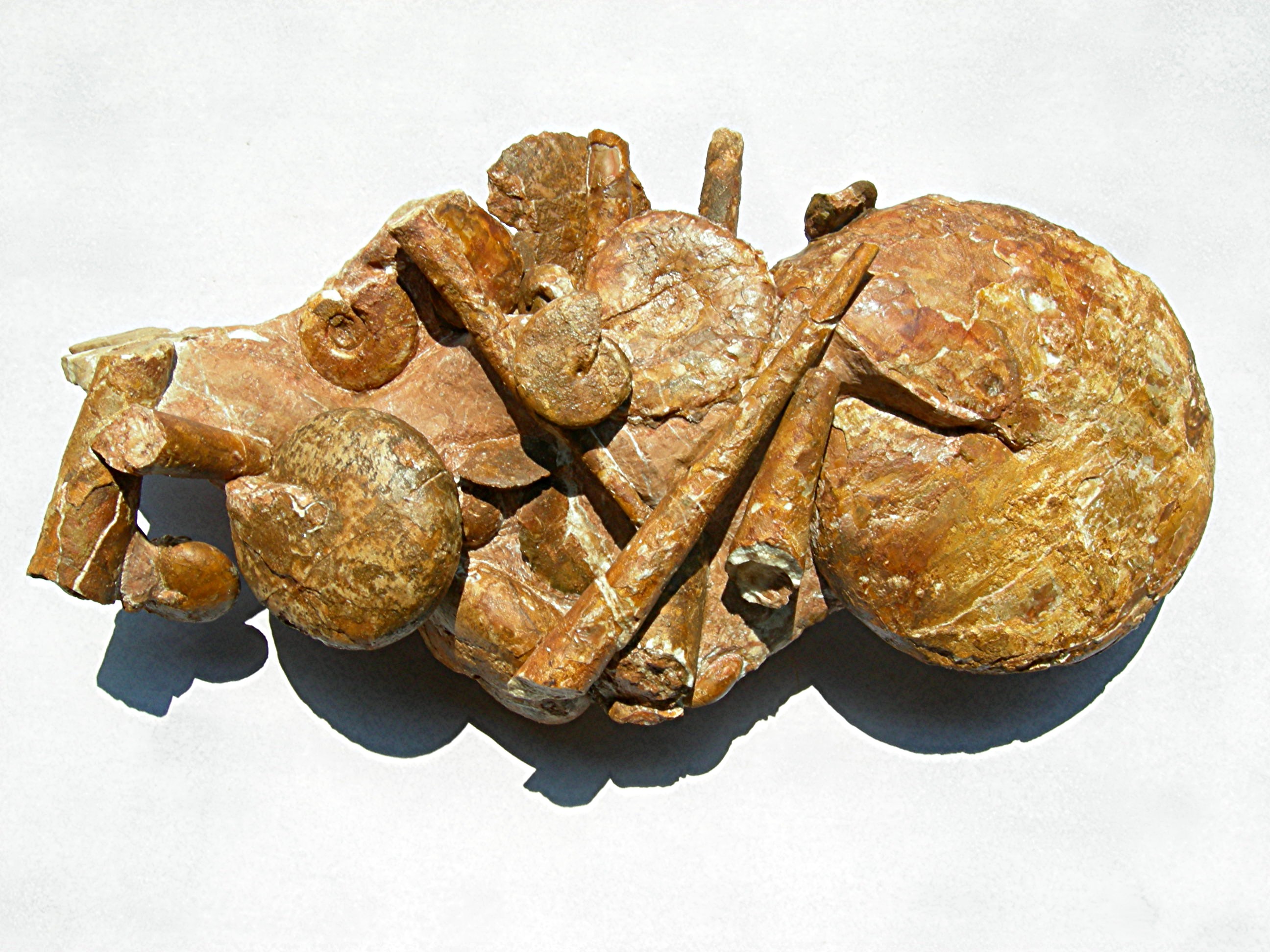 The same block prepared from its back side. Diameter of the big Johannites (right) is 23cm

A few other common(ammonite) faunal elements of these zones

The following ammonoid species are the "normal" finds of these zones, so to speak. Mostly all ammonite species shown below reach throughout these two zones and became extinct at the end of the Julian. 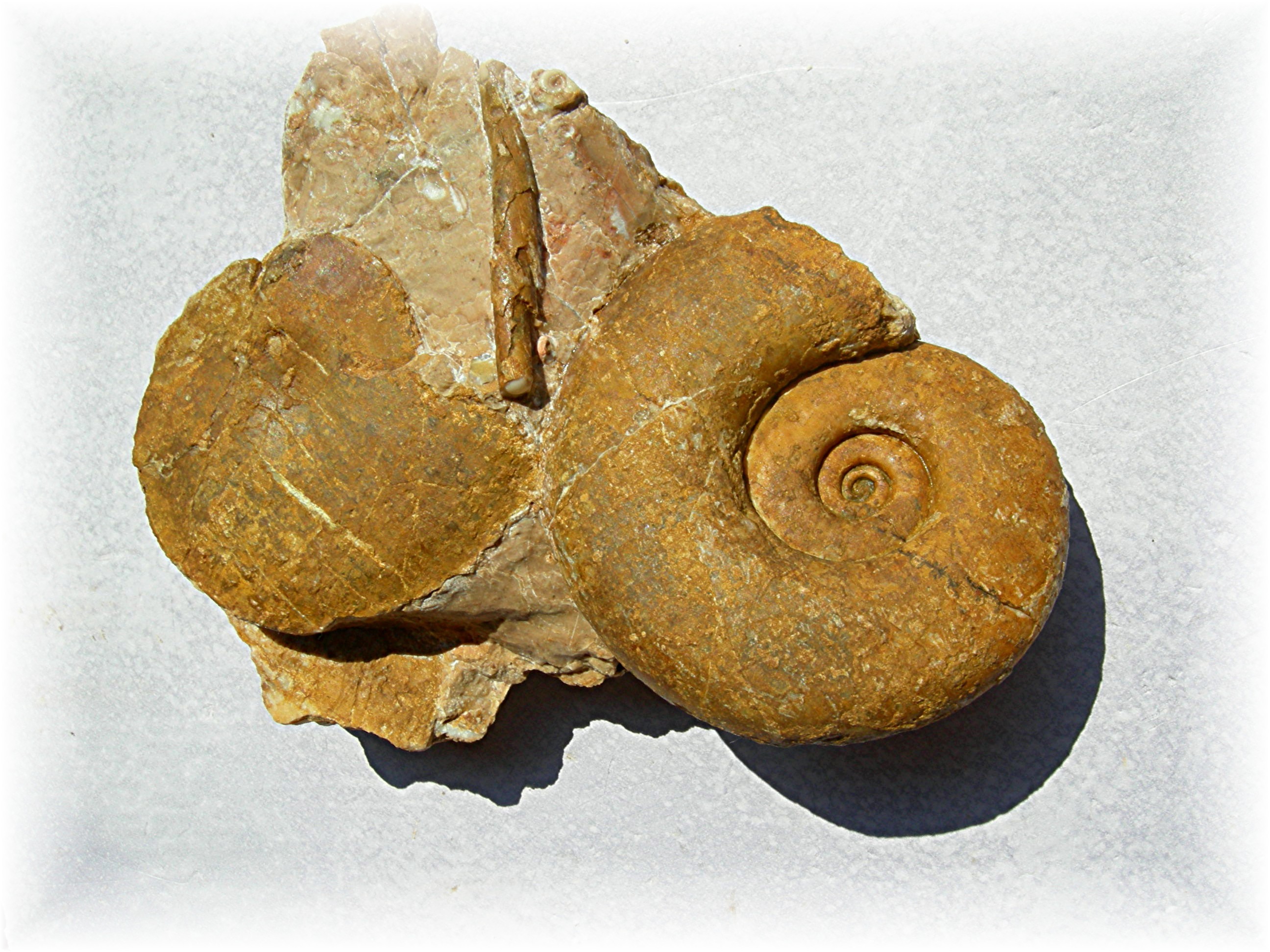 on the right side and Pinacoceras layeriHAUER on the left side. 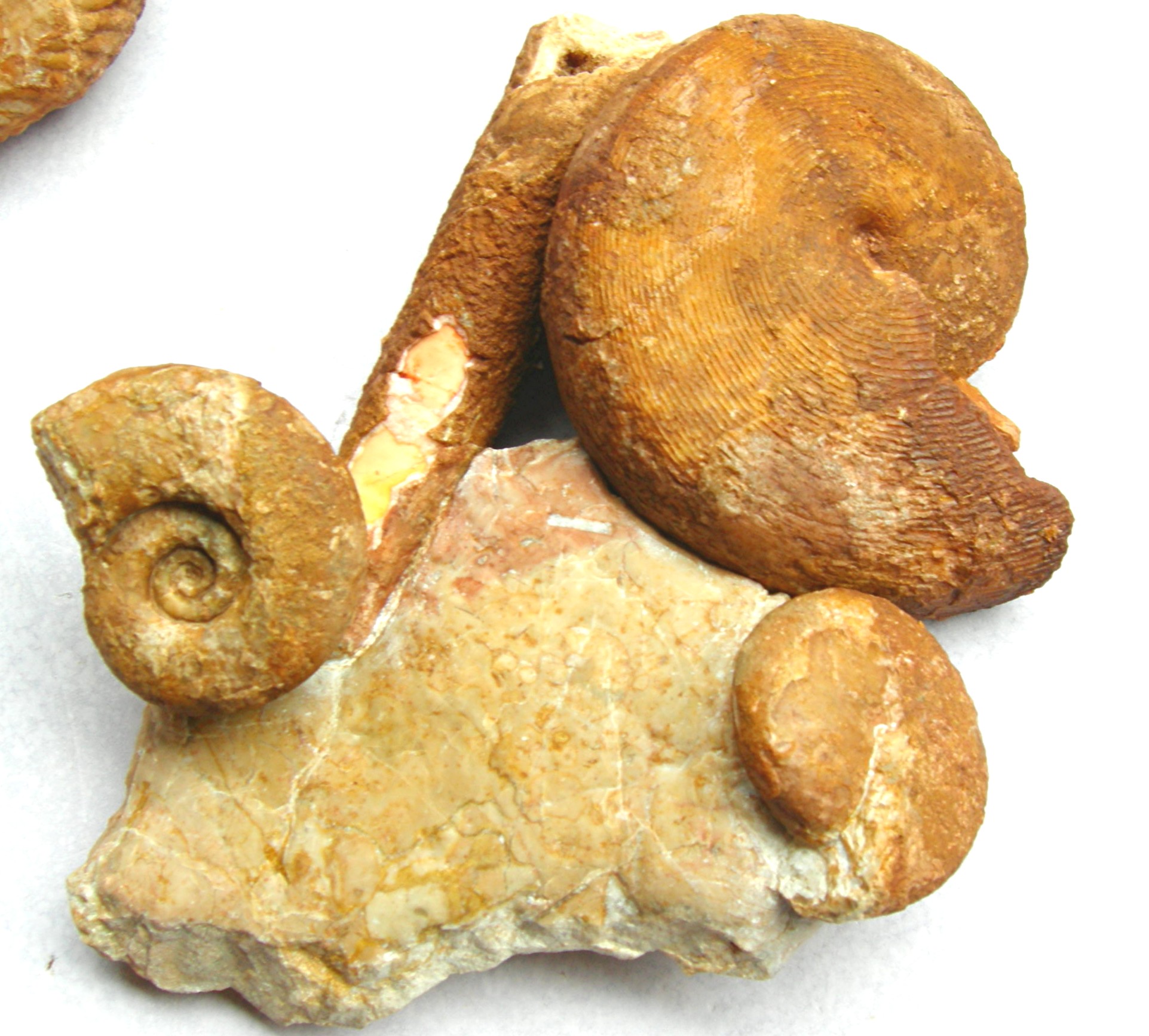 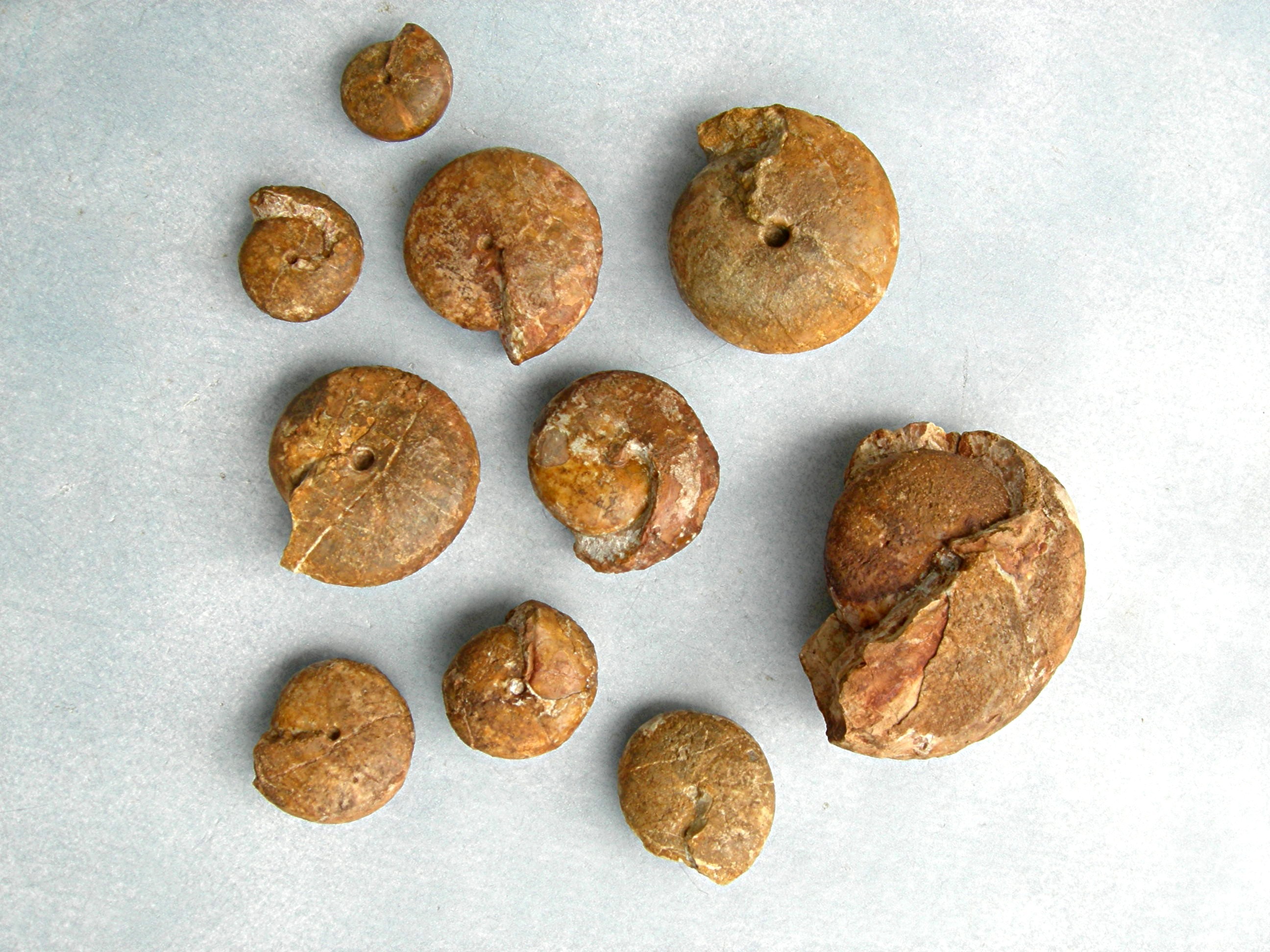 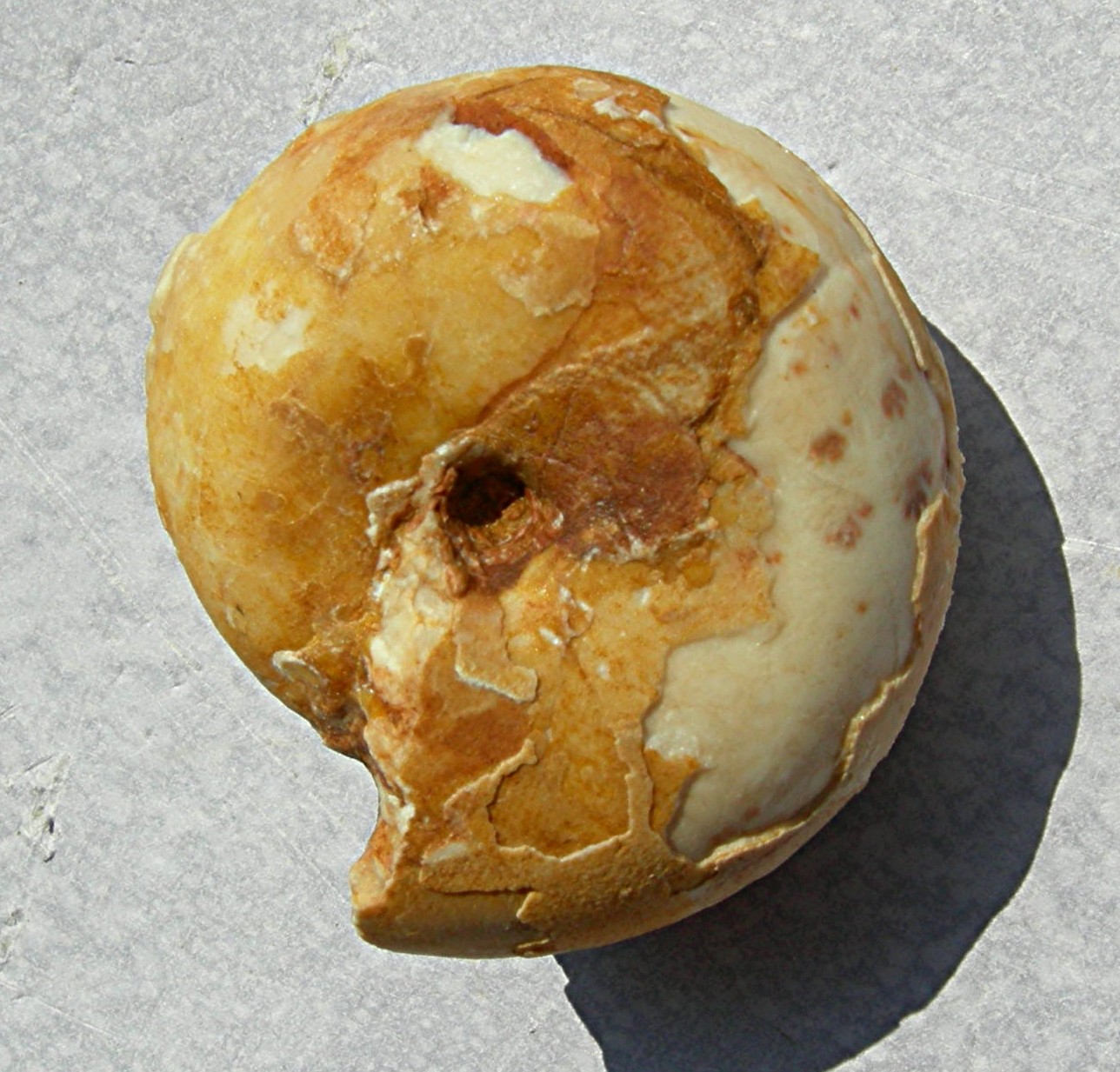 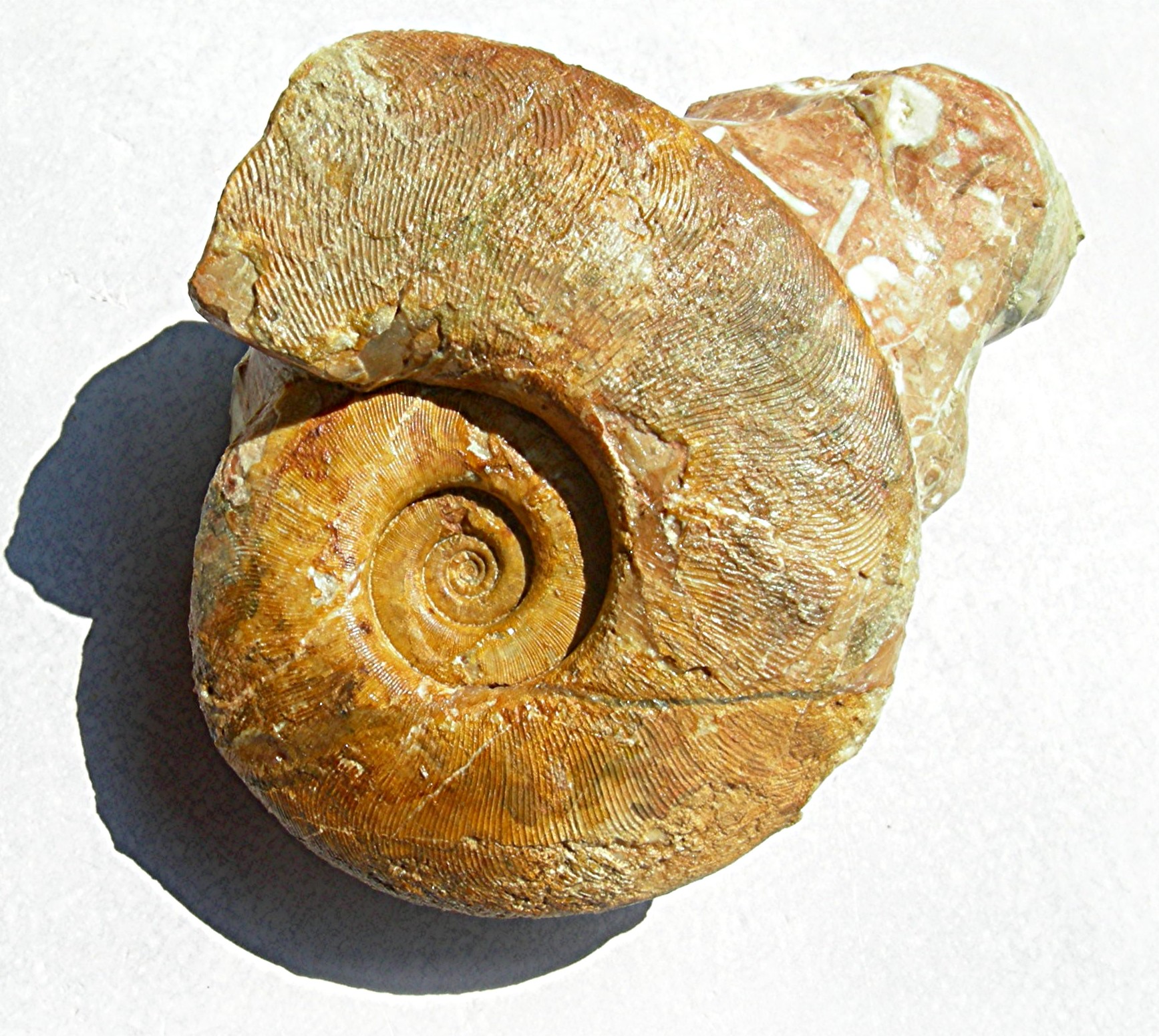 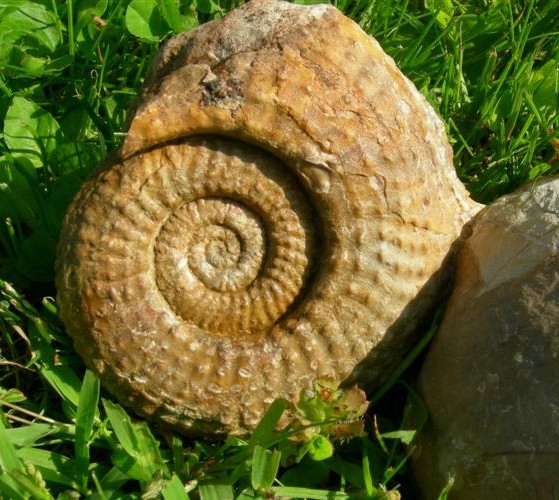 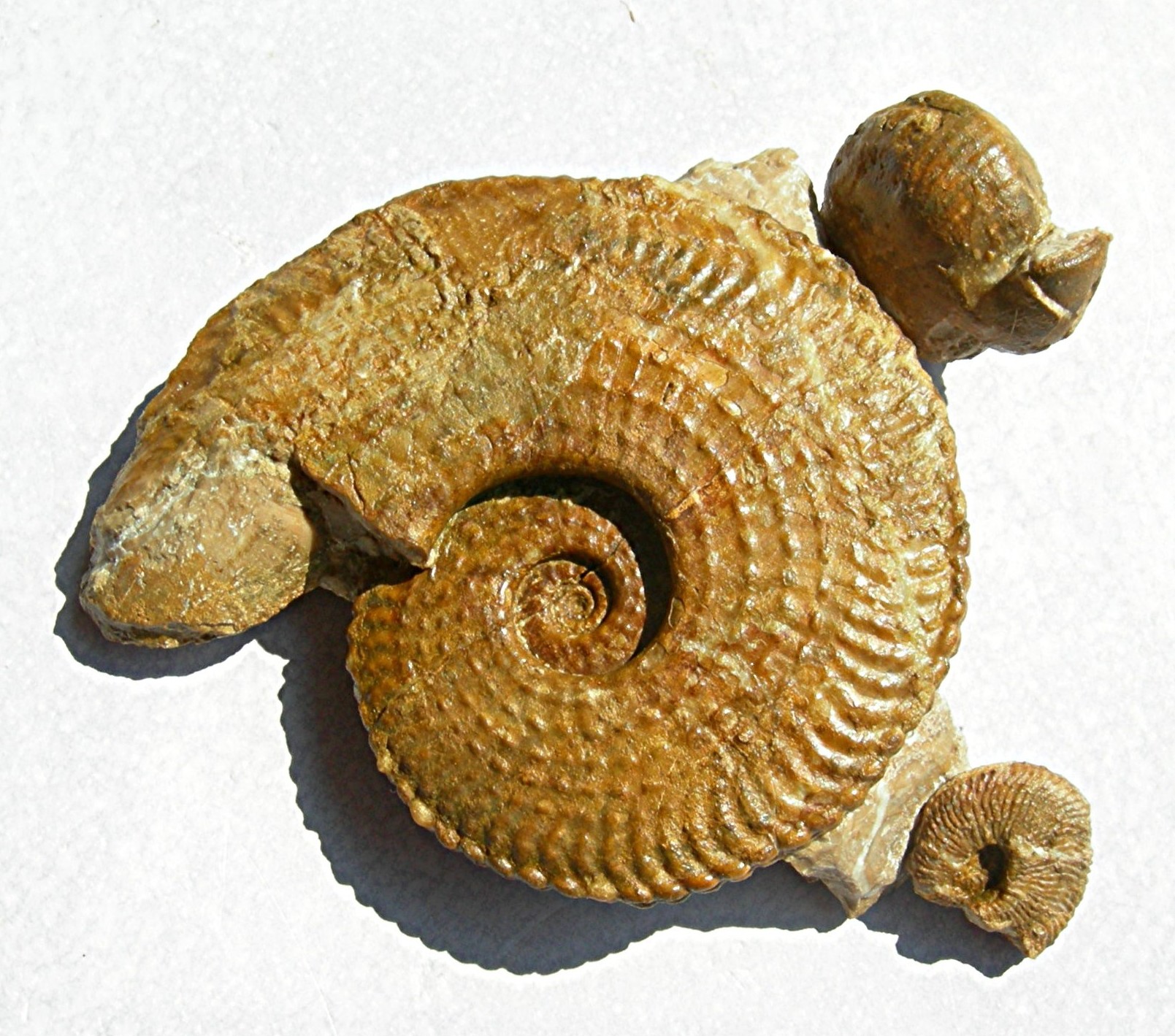 I think this report is long enough and I should stop writing now. I hope you enjojed reading this report and I was able to give you some insights on this stage and into my favourite collecting field.

Unfortunly there are less Triassic ammonoid collectors here on the fossil forum. It would be nice to discuss the differences of the Tethyan to the Northamerican Triassic ammonoid faunas with other collectors. The Anisian and Ladinian stage, which are well developed in North America, are unfortunately not very common in the Hallstatt realm at all.