Approximately 4.5 million years ago, the Albemarle basin in North Carolina was a cool temperate ocean much like that off the coast of Alaska today. Although cold, the offshore waters supported a rich and diverse ecosystem due to the upwelling of deep nutrient rich water. Placopecten clintonius scallops along with young Chesapecten jeffersonius clapped their shells together in an attempt to escape from shell crushing rays. Chesapecten as they aged would eventually develop thick heavy shells and settle onto the ocean bottom to live the life of a sessile filter feeder forming dense beds along with the giant oyster Ostrea compressiostrea which lived a similar life. The predatory snail Ecphora quadricostata moved through the soft mud in search of bivalve prey. It would use its foot to envelope clams or slow snails and then using a rasping radula, drill a hole into mollusk shells giving it access to its victim’s vulnerable internal organs. Large whales swam these waters and were preyed upon by giant megalodon sharks and seals played in the water while searching for food. Bones and teeth of predator and prey scattered the sea bottom.

Global climate conditions however would change this idyllic setting. Temperatures began to drop as did sea level when polar ice caps and glaciers began to increase. What were near-shore seas became land and stayed that way for 500,000 years. When temperatures began to increase and the Albemarle basin became ocean once more, the whales were gone and megalodon extinct. Ecphora quadricostata survived but not Placopecten. Chesapecten and Ostrea returned but changed by evolution due to the environment that they retreated to during this ice age. The water was still cold but warmer. A richer molluscan fauna now existed but with much fewer sharks and fish as the waters were possibly less productive. A physical barrier separated subtropical waters in South Carolina from temperate conditions in Virginia however warm cycles would occur allowing for exotic southern species to thrive in the north at least for awhile. Barrier islands formed changing the conditions in this area of North Carolina from open marine to brackish. The molluscan fauna was replaced by species adapted to lower salinity, but returned when global temperatures raised sea levels once more. The late Pliocene however, was a tumultuous time. The final closure of the Isthmus of Panama was occurring changing oceanic currents forever. Whether this changing ocean pattern increased global ice or some other factor was the cause, the resulting sea drop was rapid and extreme with as much as 80% of the molluscan fauna becoming extinct. When the seas returned once more towards the end of the Pliocene, only a handful of species were present and great lineages such as Chesapecten and Ecphora were forever gone.

One of the reasons I enjoy fossil collecting is the story that rocks and fossils tell. The scene that I just described is depicted within the Yorktown Formation found within northeast North Carolina and Virginia. The first paragraph describes the topic of my last post, Zone 1 Yorktown Formation, the second paragraph and which I will be reporting in this entry, Zone 2. W.C. Mansfield divided the Yorktown into two biozones (Zones 1 & 2) while Ward and Blackwelder further divided Zone 2 into three members the Rushmere, the Mogarts Beach, and the Moore House. The Rushmere member outcrops along the Roanoke and Meherrin Rivers which I have been writing about in my last few posts. The Mogarts Beach member is present in one spot on the Meherrin, but since it is the brackish silty clay that succeeds the Rushmere, only the bivalve Mulinia congesta (Conrad, 1833) occurs in any great numbers and won’t be discussed here. The Moore House member represents the return of marine conditions and the Zone 2 fauna to the area that I also mentioned above. It includes the fantastic shell beds formerly exposed in the Chuckatuck quarry in Virginia but since it does not outcrop along the Meherrin or Roanoke Rivers, I will report about it at a later date.

I have collected the Rushmere member of the Yorktown Formation across North Carolina and Virginia. Zone 2 guide fossils include Chesapecten madisonius (Say, 1824), Chesapecten septenarius (Say, 1822) Ostrea raveneliana Tuomey & Holmes, 1855, and Ecphora quadricostata (Say, 1824) (fig. 1). Along the Meherrin River the contact between Zones 1 and 2 can be readily observed. The Rushmere exposures here are typical of this member; silty sands thick with shells of large bivalves and a few gastropod species scattered here and there (fig. 2). Of note is the presence of Glossus fraternus (Say, 1824), a taxa which is today represented by only a single species found in the North Atlantic and indicating that perhaps the Rushmere here at the Meherrin was colder than coastal waters today. 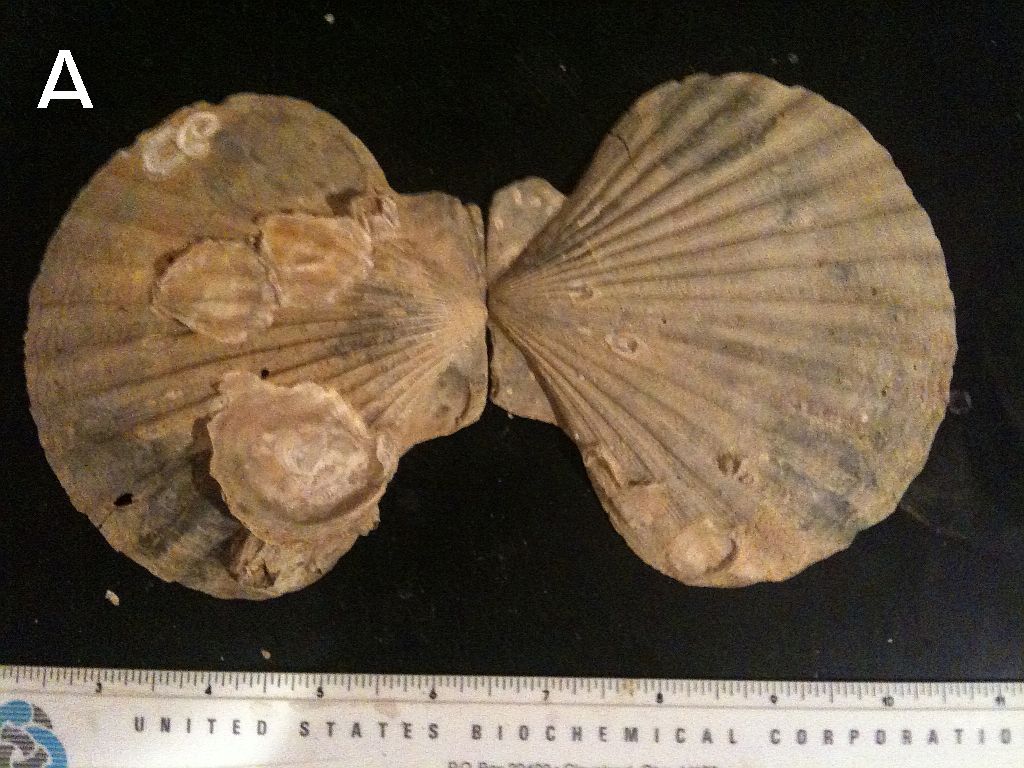 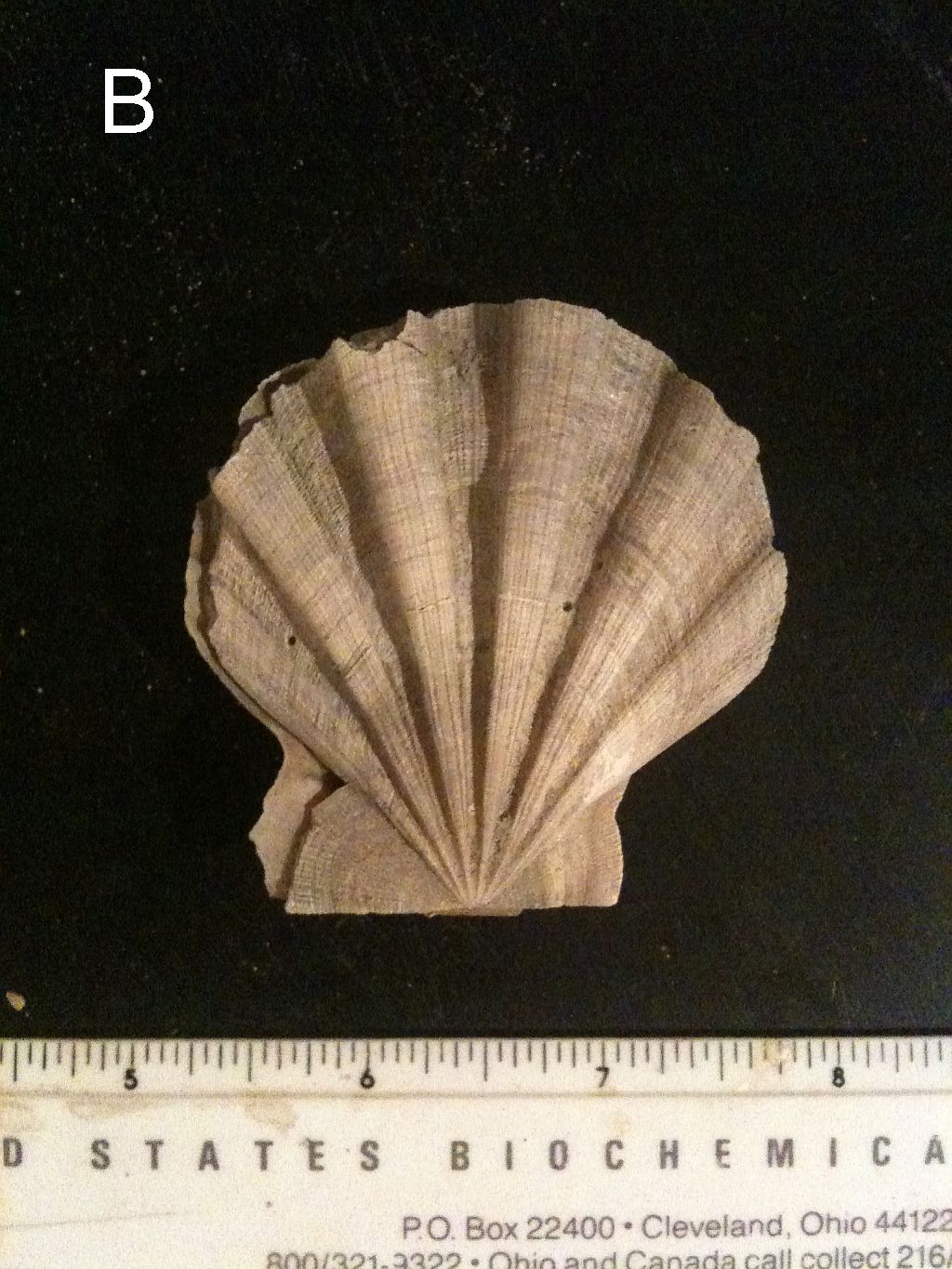 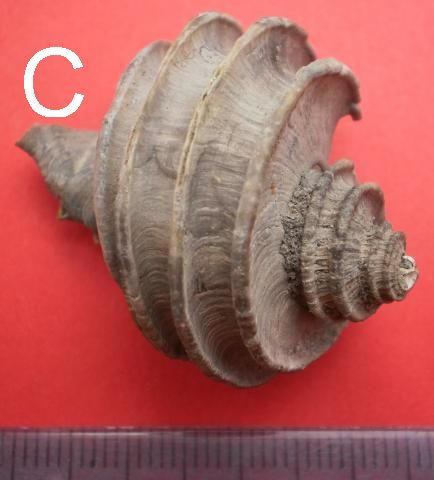 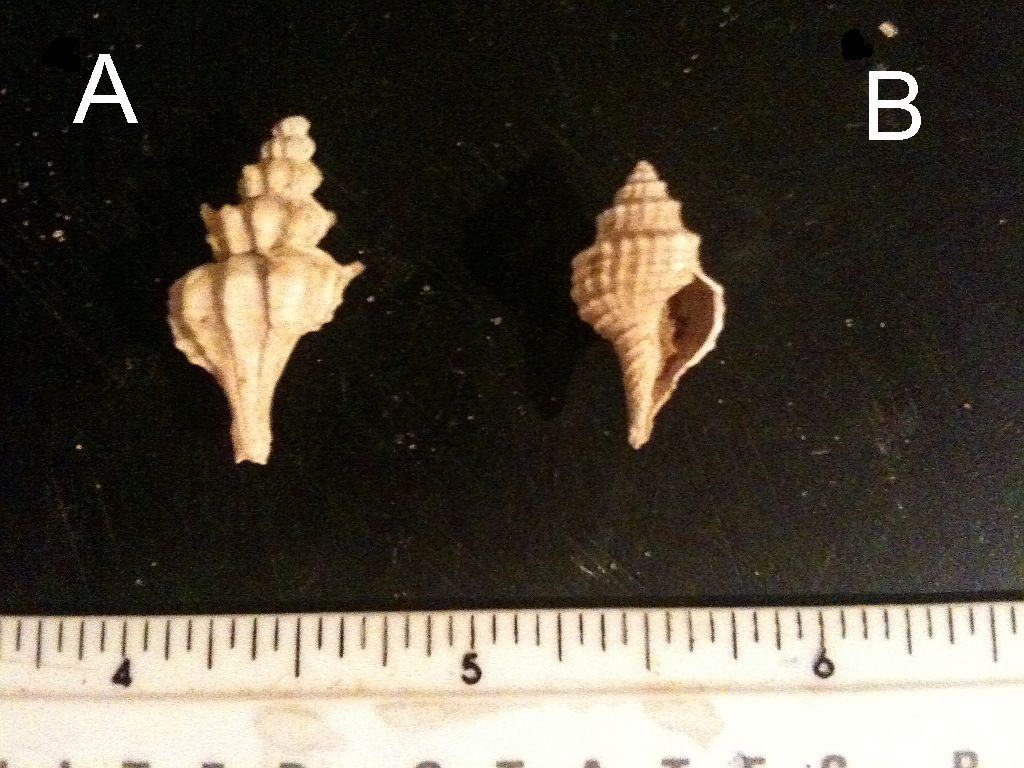 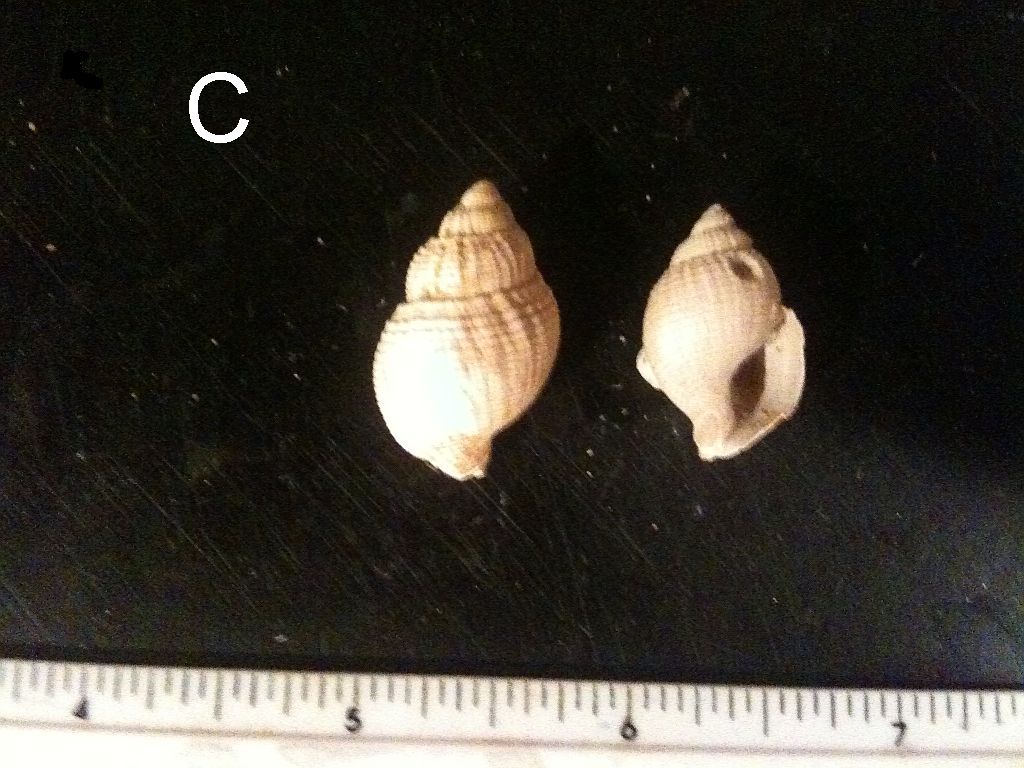 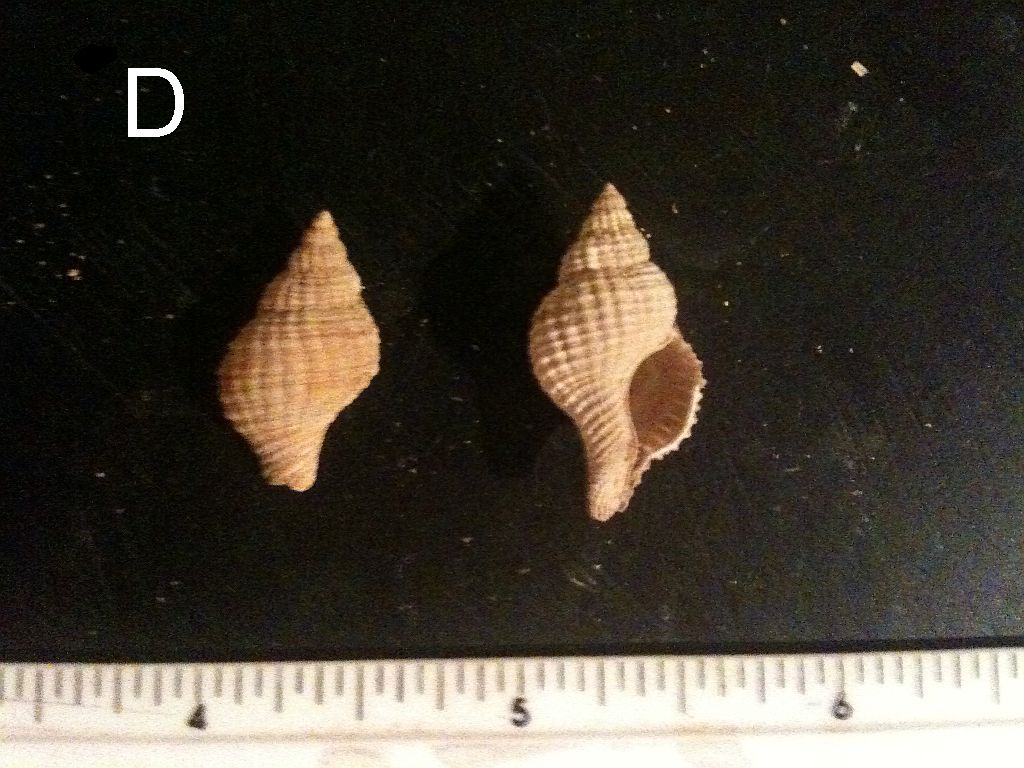 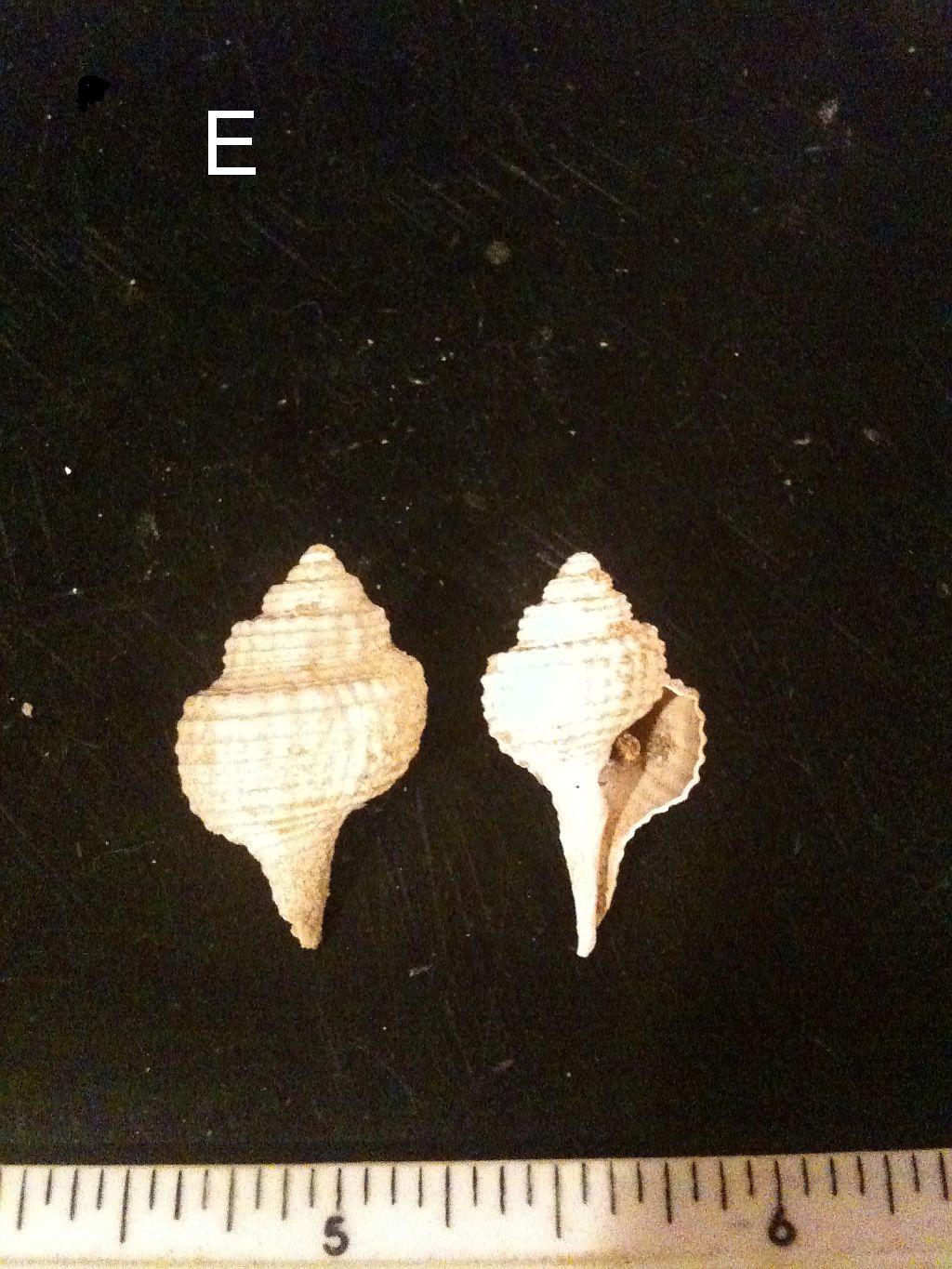 The Rushmere is also present on the Roanoke River however the fauna is somewhat different than most that I have collected and therefore quite interesting. At locality 1010, the Rushmere sits directly upon Upper Cretaceous sediments probably Black Creek Formation. Although macrofossils are not present in the Cretaceous here, vertebrates are plentiful along the lower Rushmere contact. Since the Zone 2 Yorktown is vertebrate scarce, bones and teeth were probably derived from Zone 1 Yorktown or the Eastover Formation and deposited as lag during the beginning of the Rushmere transgression. Some in my party found small meg teeth at this site. I found a mid-sized but very worn meg, bone pieces, and a nice dolphin tooth (fig. 3) that I identified based upon an almost identical tooth figured in the VMNH Lee Creek publication (Whitmore & Kaltenbach, p.22, fig. 66a). 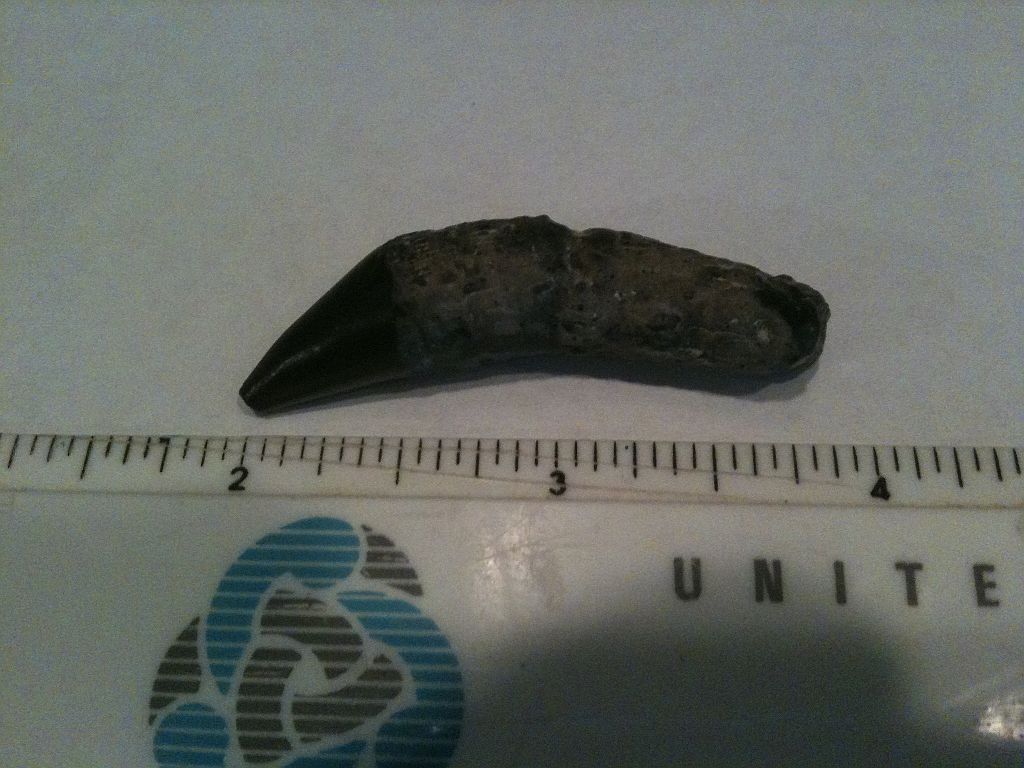 I found several unusual shells at Roanoke River locality 1011 (fig. 4). Larger gastropods were common particularly carnivorous volutes and moon shells. Although I have collected these in the uppermost Zone 2 at Chuckatuck and they have been reported in the Rushmere, I have never personally collected volutes in the Rushmere. Preservation was not the best, but they were unusual enough to collect (fig. 5). An unusual Chesapecten is also found here. The population of Chesapecten madisonius at this locality has a maximum of 12 ribs compared to the usual 16 (fig. 6). The difference can be seen by comparing figure 6 to figure 1A. Lauck Ward who originally named Chesapecten has found these only in this area and thinks they are a hybrid ("race") of C. madisonius and C. septenarius, probably deserving a subspecific status (L. Ward, personal communication). I find that they are very similar to Florida Chesapecten and I will describe these in more detail in the future, but the presence of a more diverse gastropod population along with Chesapecten resembling southern forms could indicate a period of intermittent warmth. This is only conjecture on my part but if so, these conditions were not to last as the regression and then transgression 800,000 years later that is captured in the Chowan River Formation was to decimate this fauna. 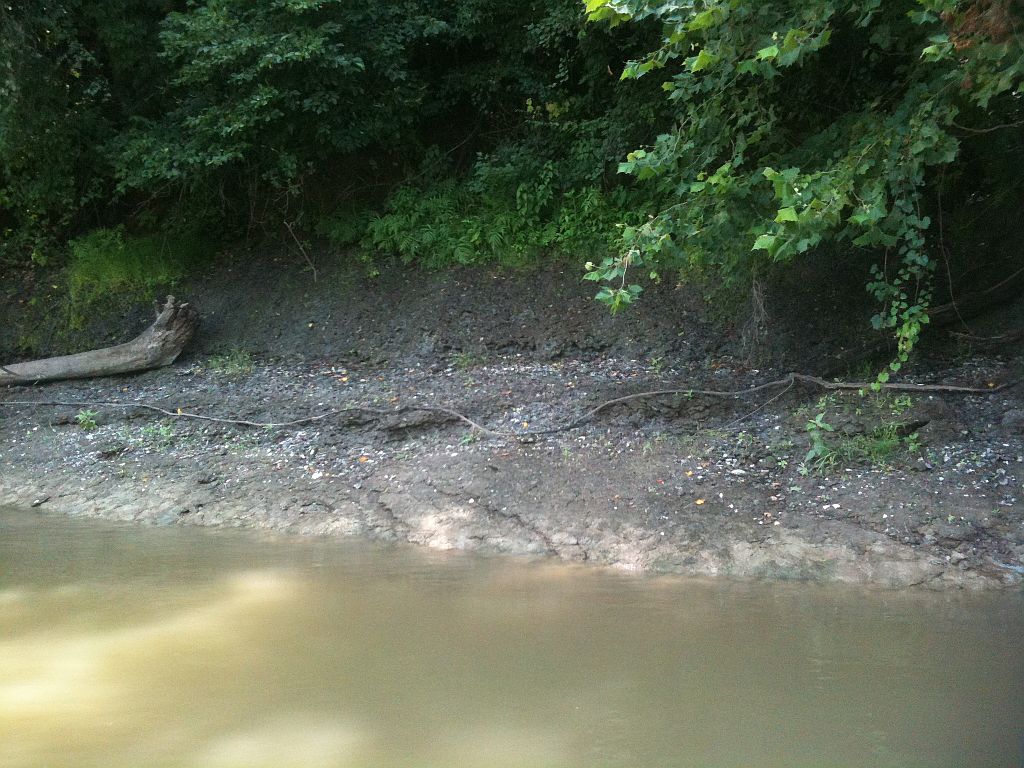 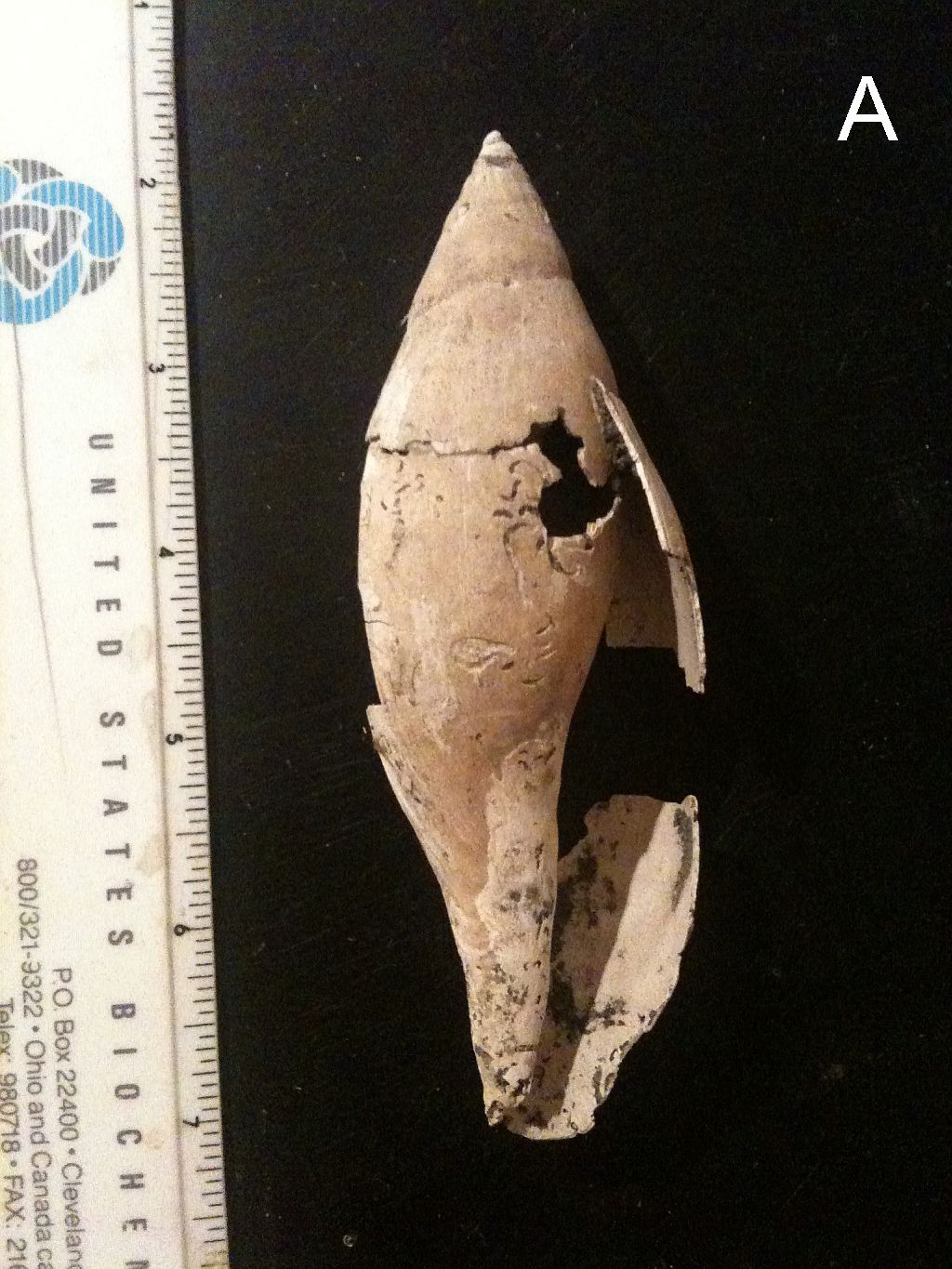 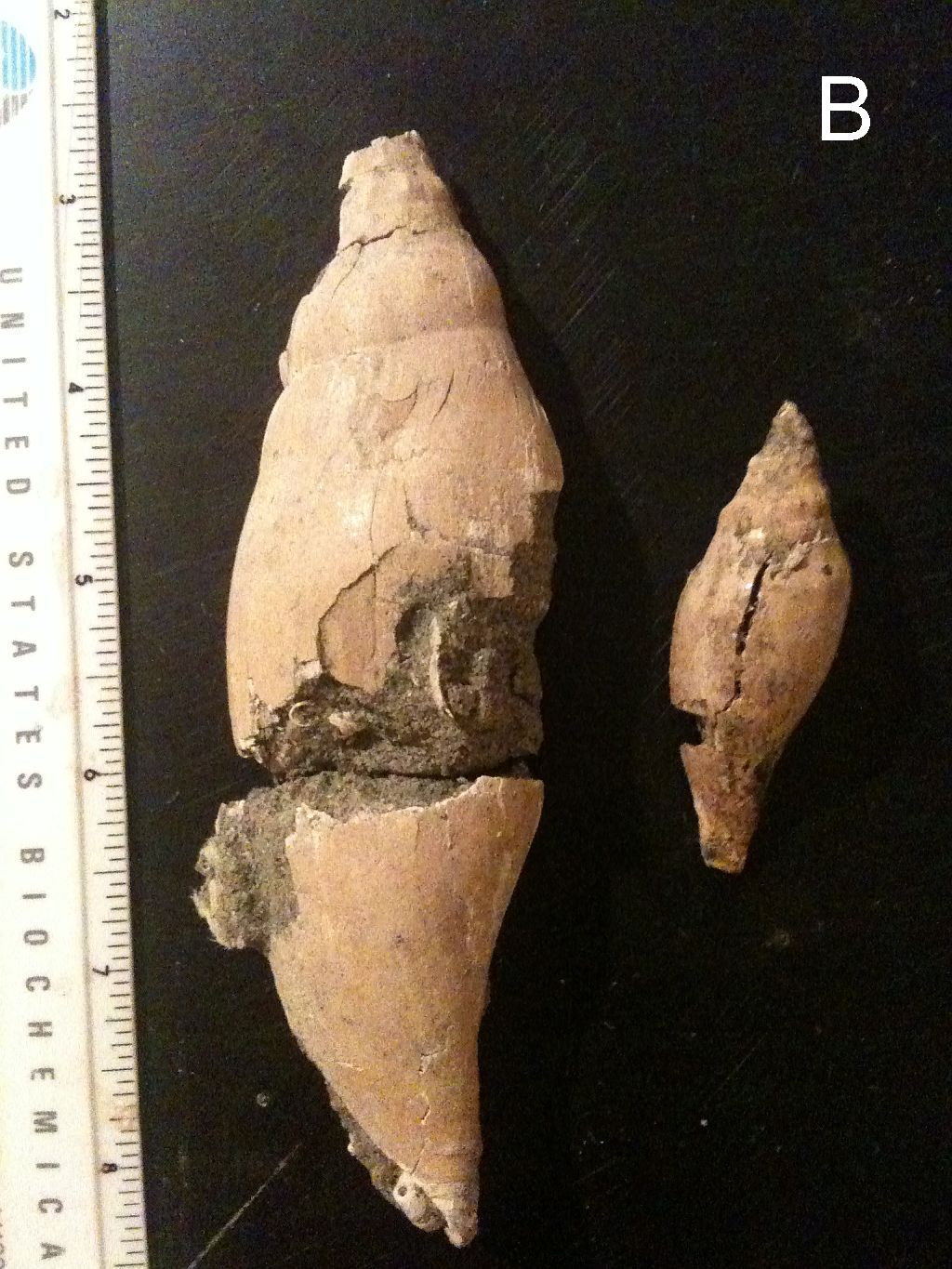 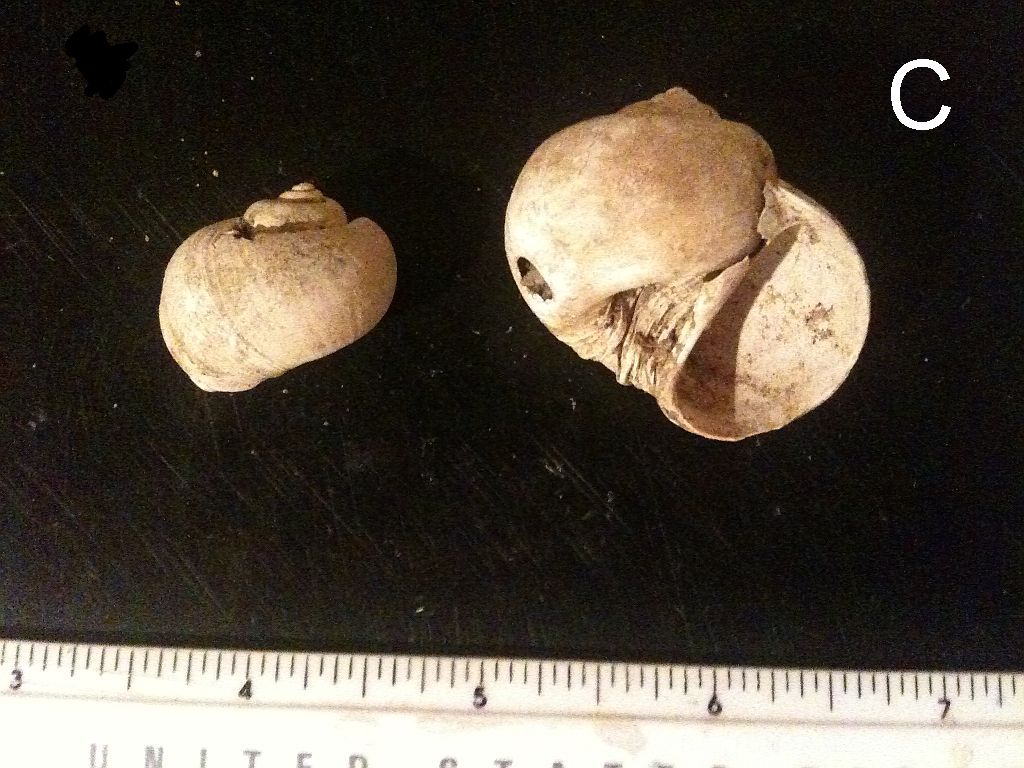 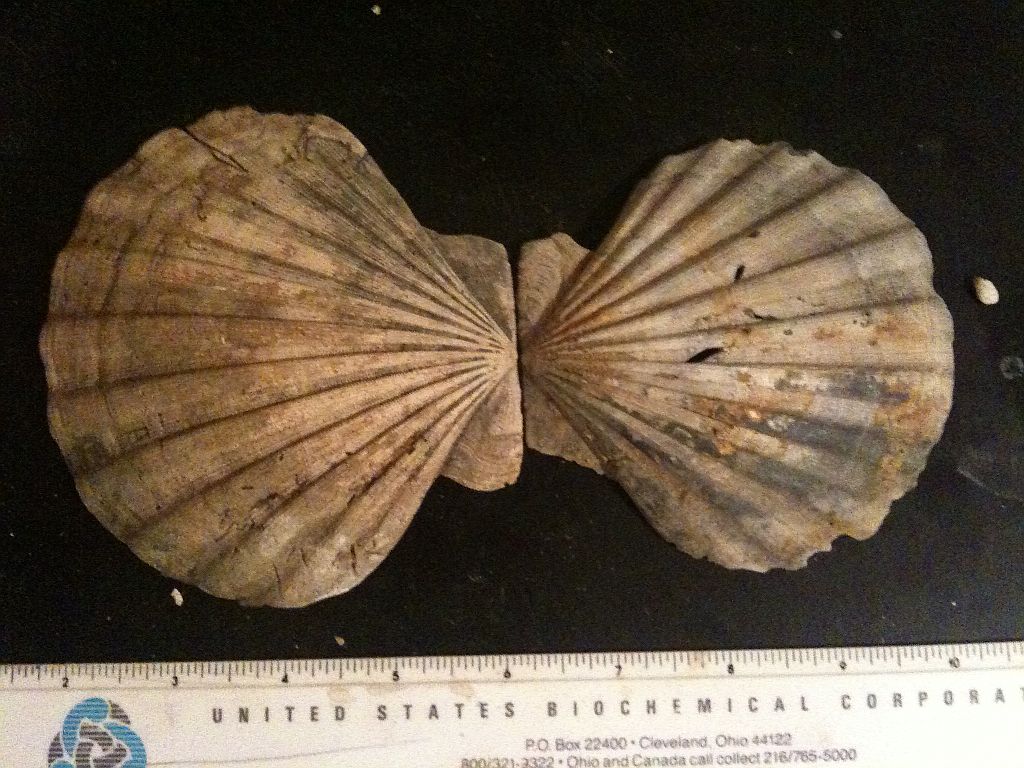 Molluscan fauna lists from the region below:

Molnar, Peter. 2008. Closing of the Central American Seaway and the Ice Age: