Between 2.5 and 4.5 mya most of Florida south of St. Petersburg was submerged under a cold but warming sea. The series of sand, shell and limestone deposited during this time is named the Tamiami Formation. In April 2011, I visited one of the famed Sarasota shell pits exposing primarily Beds 10 and 11 of the Tamiami Formation, my locality 1016 (fig. 1). My earlier days at APAC were spent collecting from a mixture of beds 1-11, so I was excited that I could collect in a biostratigraphically restricted area to get a better idea if these units contained as diversely an endemic fauna as described in Petuch’s books. Some of the Bed 11 fossils collected are pictured in figure 2 and all mollusks that I found from Bed 11 at Locality 1016 are listed in Table 1. 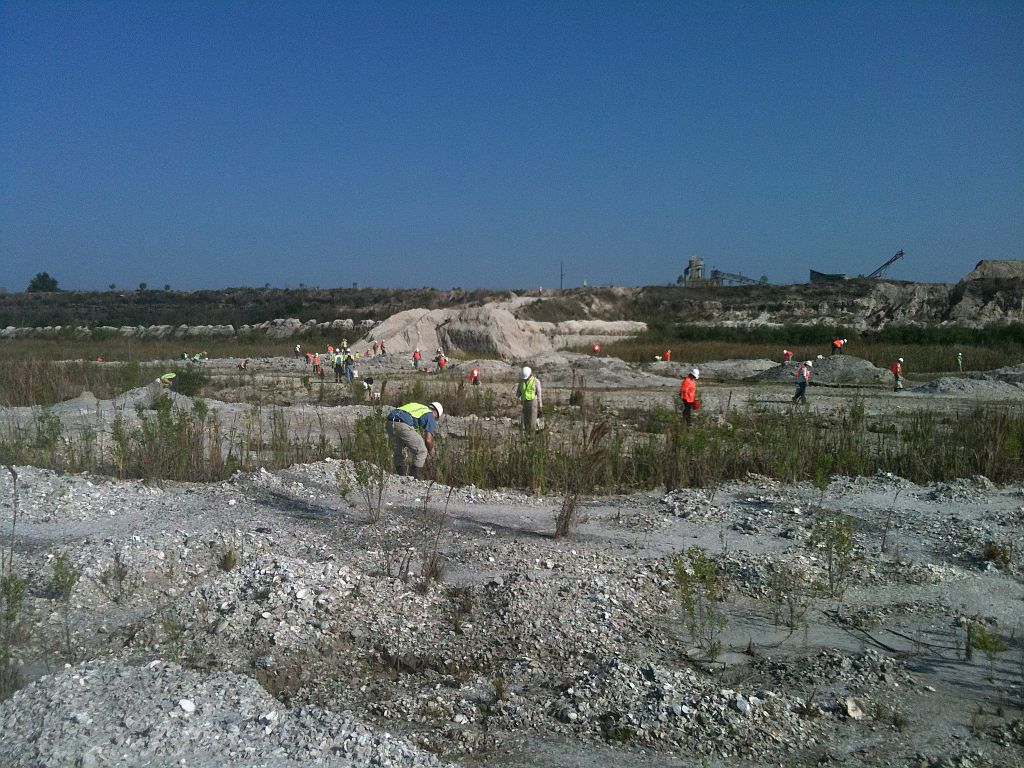 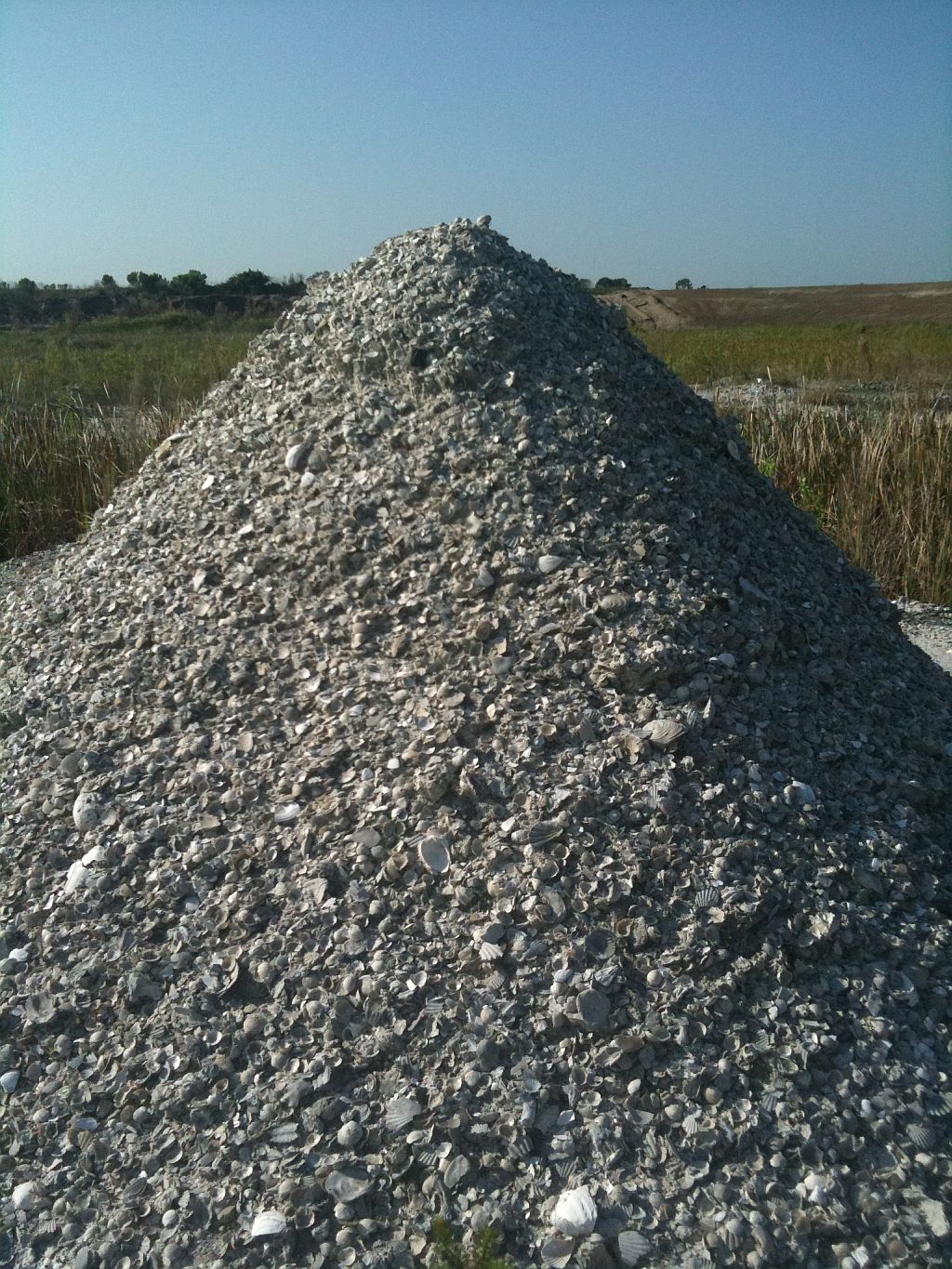 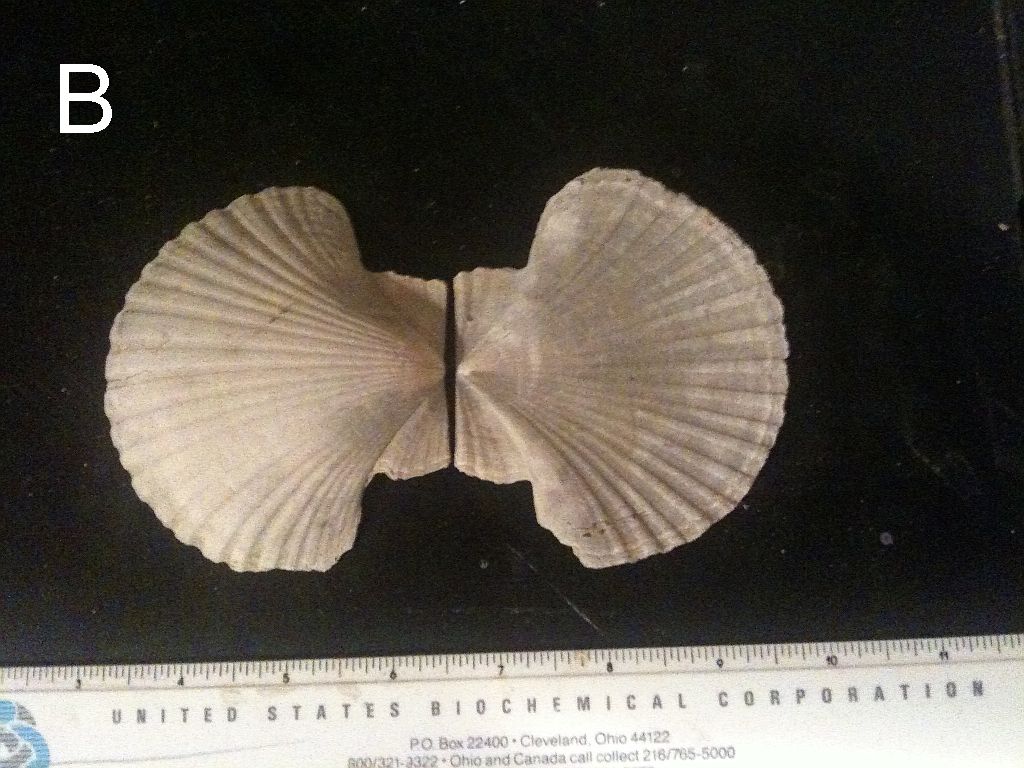 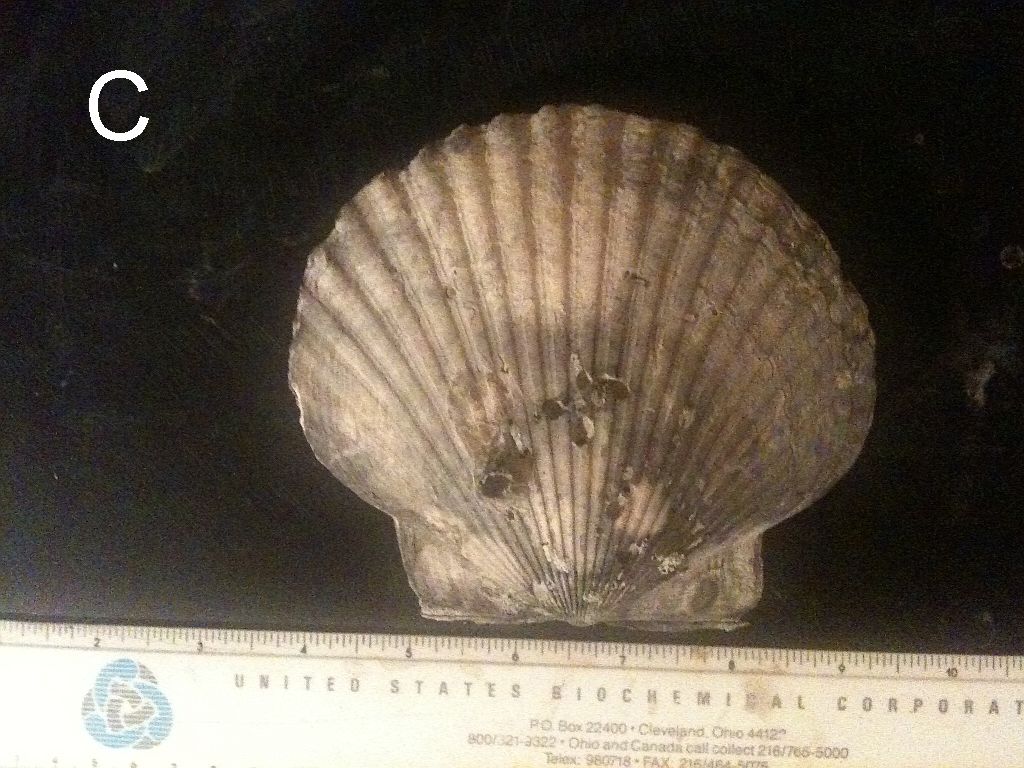 Ed Petuch was the first to publish a detailed stratigraphic column of the Tamimi from the old APAC quarry in Sarasota and identified 11 biostratigraphical units. The lowest and therefore oldest unit, Bed 11 is distinctly different from the rest by the lack of aragonitic shells from leaching, a diverse calcitic molluscan fauna including the last appearance of Chesapecten in Florida, massive barnacles, an abundance marine vertebrates and the presence of the mineral phosphorite. Based upon a resemblance to the fauna of Zone 1 Yorktown, Petuch classifies this unit as the Lower Pliocene (Zanclean) Sarasota Member of the Murdock Station Formation. Since this is a biostratigraphic (fauna) designation as opposed to the formal lithographic (rock) description, I follow the classification of this unit as Lower Tamiami Formation (Roger Portell, FMNH, personal communication).

Not all researchers think that Bed 11 is Lower Pliocene. Lauck Ward claims that Zone 1 Yorktown aged sediments are not found south of the Lee Creek Mine and reports of Chesapecten jeffersonius south of LCM are misidentified C. madisonius, septenarius, or hybrids of the two; indicator species of the Upper Pliocene (Lauck Ward, personal communication). He also reported that the associated fauna found in Bed 11 is absent in Zone 1 Yorktown Formation, but present in Zone 2 Upper Pliocene (Piacenzian). Victor Zullo also reported that the barnacle fauna in Bed 11 was related to that of Zone 2 Yorktown Formation.

At first glance, Bed 11 does appear to be of the same age as the Sunken Meadow Member (Zone 1) of the Yorktown Formation. If based solely upon rib number, the plentiful Chesapecten present would be C. jeffersonius. Roger Portell says that all Chesapecten in the collection at FMNH is labeled either C. jeffersonius or C. septenarius; although a systematic study has not been performed (pers. comm.). Lauck Ward states that rib number is not an indicator of species in Chesapecten (L. Ward, personal communication) that other factors such as the strength of the byssal notch and callous buildup on the interior of the shell must also be taken into consideration. One distinct characteristic of the C. madisonius/septenarius complex is the peripheral strength of the ribs (fig. 3). C. jeffersonius lacks strong ribs along the edge of its shell as it ages whereas C. madisonius/septenarius retains distinctive ribing. The closest I find in similarity to the Florida Chesapecten are Chesapecten that I reported from the Rushmere Member of the Yorktown Formation along the Roanoke River in North Carolina. Based upon those similarities, I list the Florida Chesapecten in my collection as hybrid madisonius/septenarius (fig. 4). One additional point; Zone 2 is not rich in vertebrate remains while Tamiami Bed 11 is. This could indicate Lower Pliocene age, however all Carcharodon teeth found on this trip were C. carcharias and not C. megalodon which became extinct at the end of the Lower Pliocene. I would be interested in hearing from anyone who has collected C. megalodon from the lower Tamiami. Maybe Floridian waters were a refuge or breading ground for cetaceans after they diminished for the most part further north during the Upper Pliocene. 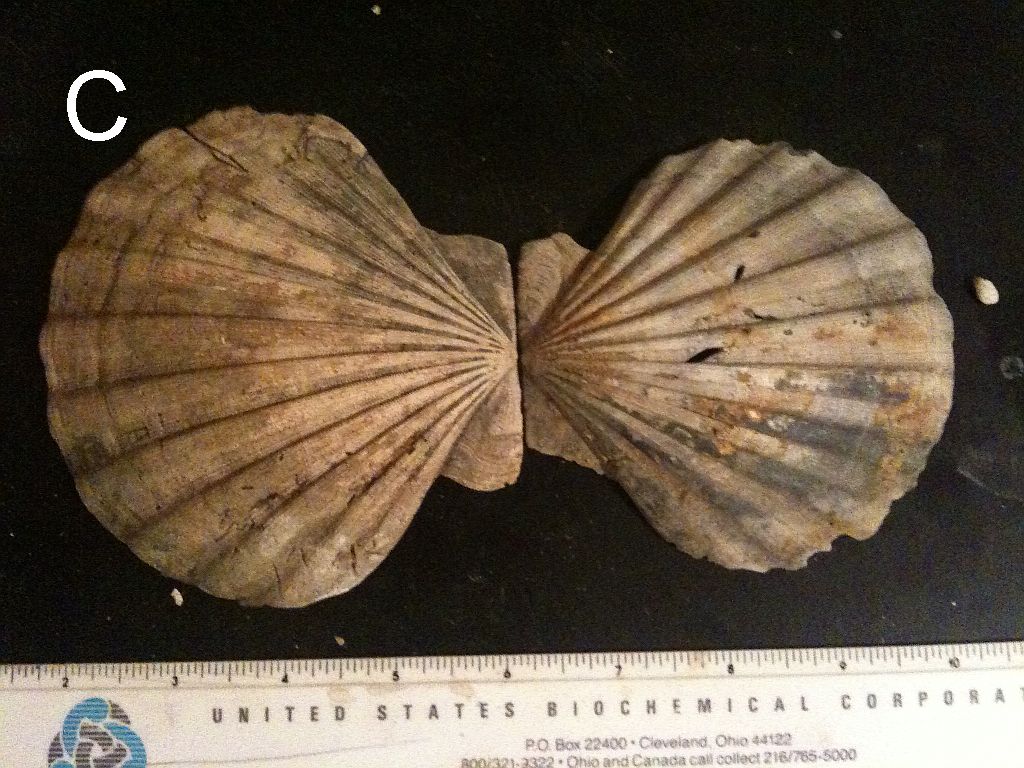 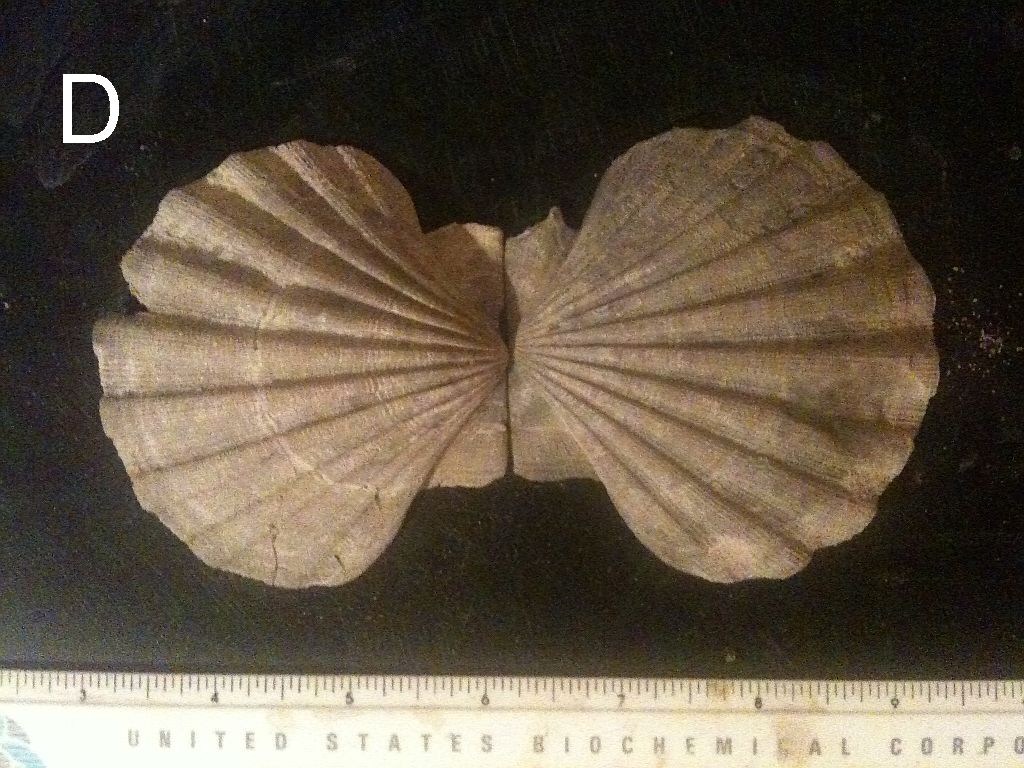 Regardless of the geological context of Bed 11, the presence of Ecphora and Chesapecten indicate that water temperatures were much cooler than the succeeding beds of the Tamiami. Another indicator is the numerous walrus remains that have been found in Bed 11. I found what I first thought was a scrap of manatee rib, an unusual find to say the least in these cold water sediments. As I researched further, I found that sirenian remains have not been reported from the Tamiami. A closer inspection revealed a thin veneer of enamel on my “manatee rib” and the possible presence of globular osteodentine which is indicative of walrus teeth. This leads me to believe that my rib fragment is actually a partial canine tooth of the Pliocene walrus Ontocetus emmonsi Leidy, 1859.

Ketcher, Kathleen. 1992. Stratigraphy and Environment of Bed 11 of the "Pinecrest" Beds at Sarasota, Forida in Plio-Pleistocene Stratigraphy and Paleontology of Southern Florida, Florida Geological Survey Special Publication No. 36.

Kohno, Naoki and Ray, Clayton E. 2008. Pliocene Walruses from the Yorktown Formation of Virginia and Noarth Carolina, and a Systematic Revision of the North Atlantic Pliocene Walruses in The Geology and Paleontology of the Lee Creek Mine, North Carolina, IV. Virgina Museum of Natural History Special Publication No. 14.

Petuch, Edward J. 2007. The Geology of the Evergades and Adjacent Areas. CRC Press.

Zullo, Victor A. and Portell, Roger W. 1993. Paleobiogeography of the Late Cenozoic Barnacle Faunaof Florida in The Neogene of Florida and Adjacent Regions, Florida Geological Survey Special Publication No. 37.