The Tuvalian Substage Of The Triassic Hallstatt Limestone In Austria

This report will introduce you to the Tuvalian substage (uppermost Carnian/ Triassic) of the so called Hallstatt limestone in Austria. View above the Hallein-Berchtesgaden Triassic area to the Watzmann and the Hochkalter mountains.

The name of this substage was chosen by "Old master" Mojsisovics from the mediaeval name of the hill ridge/salt mine area between the rivers Salzach and Königseeache in the borderland between Bavaria (Germany) and the county of Salzburg (Austria). Originally this term was of Roman source (Mons Tuval) but it was preserved in this area to our days (e.g. ruin of the castle Tuval)

The wordTuval has probably Hebraeic roots and mean "rich" or "blessed" earth because of the saltmines of this area.

A few other genera not listed above belong also to this family but I will not list them here because this report should not get too long.

Representative for the Tropitidae is shown a picture of Tropites subbullatus, the zone ammonite of the alpine Tuvalian II, from the old Monographic work of Mojsisovics „Das Gebirge um Hallstatt. 1893, Taf. CVI," 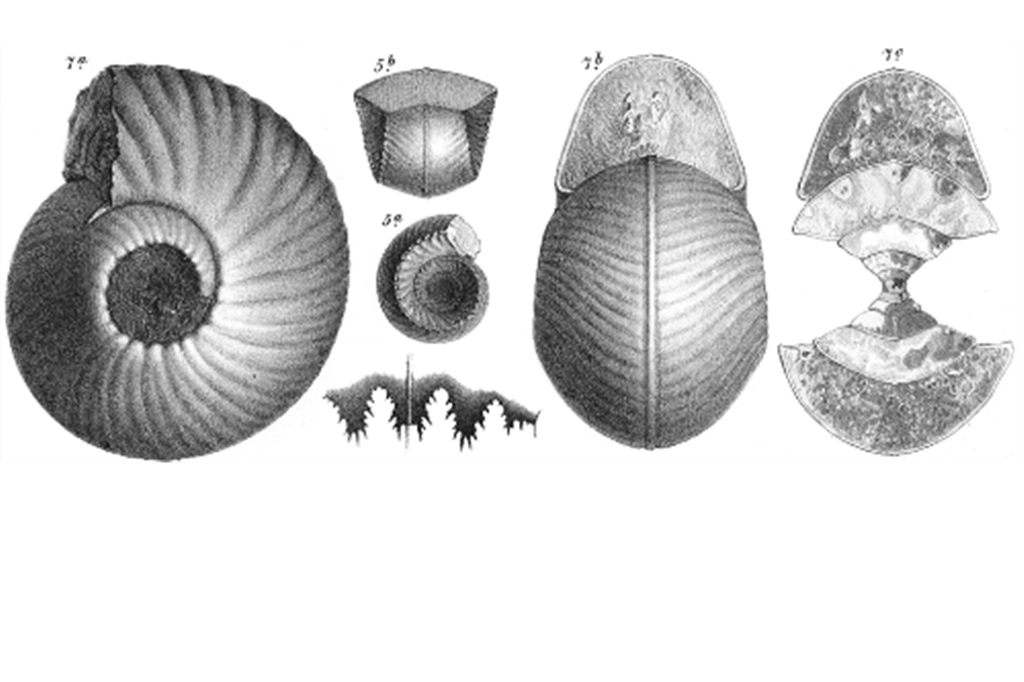 In the North American literature (after Tozer) the Tuvalian is split into three Zones.

It starts with the Dilleri Zone, the Welleri Zone and the Macrolobatus Zone on the top.

The Macrolobatus zone is named after Klamathites macrolobatus an endemic ammonite of the North American strata.

Other genera of this zone are comparable to the time frame of the latest Tuvalian and the earliest Norian of the Alps.

In the Hallstatt (Tethys) realm the following Division is made.

In the Alps normally you can observe in the field only Tuvalian II and Tuvalian III, but one has to ask the question if there are all three North American Zones included in these two alpine Zones.

In my opinion there is less evidence for a time gap in the lower Tuvalian of the Alpine strata. Visibly stronger condensation in this generally condensed limestone occurs frequently in the upper Tuvalian III.

E.g. Discotropites sandlingense is in North America a clear Dilleri faunal element but in the Alps it is ranged into Tuvalian II (Welleri Zone). The same is done with the genus Traskites sp. (corresponding to alpine Sandlingites sp.). Some ammonites of the upper part of the Macrolobatus Zone are also ranged to the first zone of the alpine Norian stage. I think the correlation of the North American scheme with the Alpine scheme probably doesn't fit exactly.

It is very difficult to range a Tuvalian fauna exactly.

Probably Tuvalian 1 is recognizable in the Alps only by the composition of the faunal spectrum (the quantity of some special genera). In some „lenses", Trachysagenites sp. Sagenites inermis, Sandlingites sp. occur very frequently together with scarce Tropites sp. and Sirenites sp. and with very rarely Neoprotrachyceras cf. thyrae.

Therefore it seems important to me to get a survey of a Tuvalian fauna in a lens or fissure filling. A good way to do this is to write a fossil list of each block found. The best way, in my opinion, is to prep out and expose as many ammonoids as possible and leave them on the block.

In this way one can recognize later possible errors and study the sedimentary features of this block.

Marking down and upside should be done if possible.

Even on small pieces you can recognize a current setting with this method.

A small slab (6cm) with some current deposited Pamphagosirenites sp.(Tuvalian 2)

The transition (proved with ammonoids) from Tuvalian to the Norian is confirmed by science only in one location in the Hallstatt limestone. This bedded profile of a Tuvalian fauna which is overlain by a Norian fauna comes from the "Feuerkogel". In this abandoned, fully filled place the lower transition from the Julian to the Tuvalian was also evident in parts.

The next Picture shows the geologic transition of the Carnium/Norian border from another area. Between Carnium and Norium are some lenses of a strongly condensed limestone bed which yield ammonites of the late Tuvalian. The latest Tuvalian and lowermost Norian are confirmed there only by microfossils. 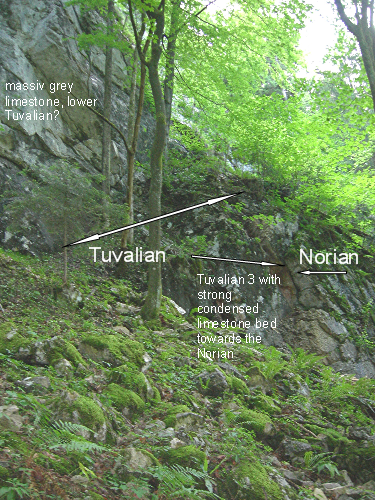 The rock wall at this place consists of grey limestone which begins in the aonoides/austriacum zone. Scarce ammonite lenses in this limestone point to the Tuvalian 1. In the Tuval ranged area the limestone succession is bedded as in the Norian part. In the Tuvalian part of the picture a bedding angle as in the Norian part of the picture is visible. The Tuvalian marked succession consists of a sparitic, biotic rich limestone with interfaced Halobia beds. In my opinion this is a larger area of an internal bedded lens/hollow rather than a fissure filling. 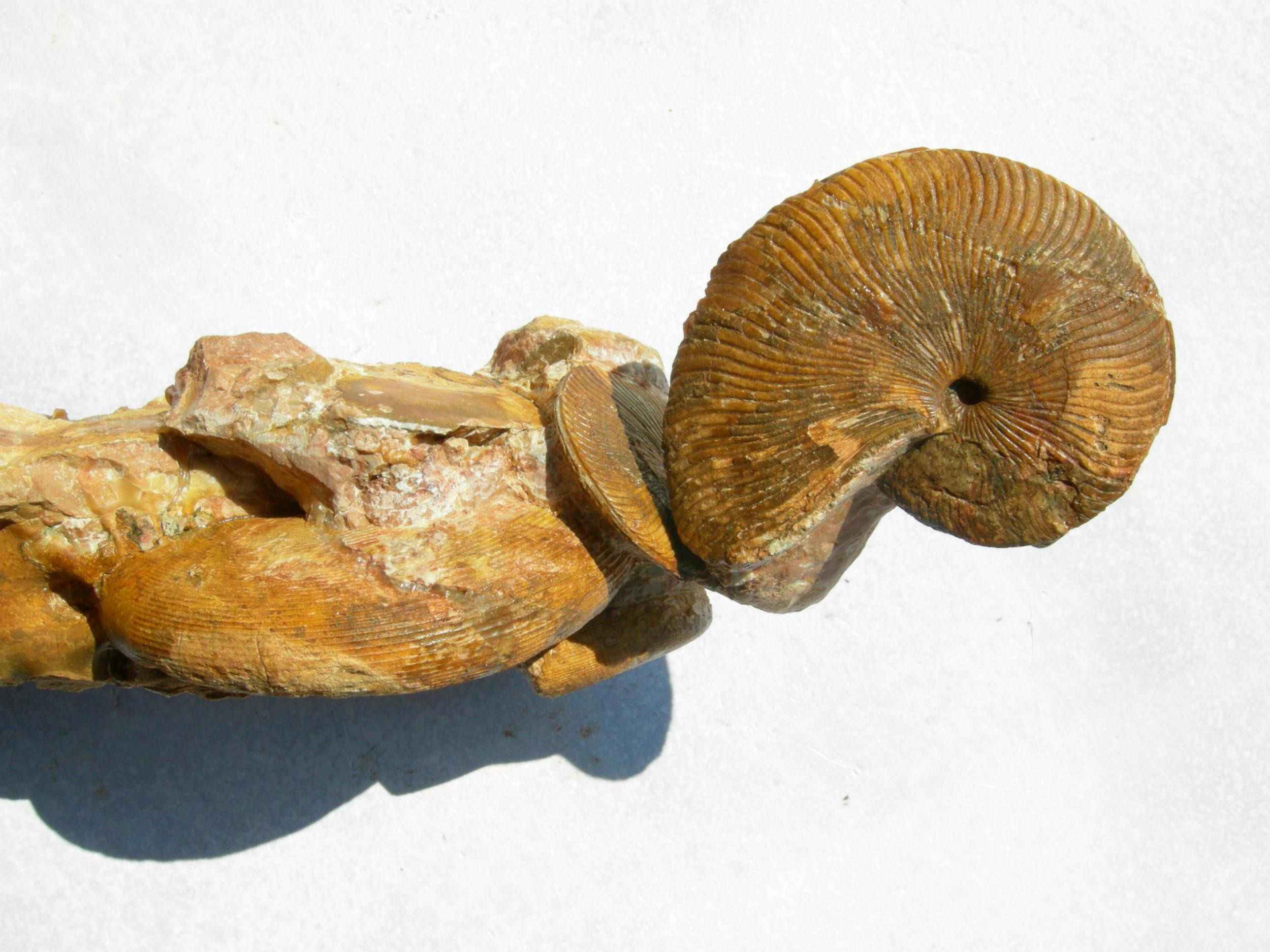 The historical location on the Millibrunnkogel/Vordersandling,

and the „Tuval" area round about Hallein/Berchtesgaden.

The latest newly discovered location (at the beginning of the 20th. Century) was the Tropites location on the world famous Feuerkogel. The whole area there is a strictly protected place and the locations there are buried under tons of collecting debris.

Within the last hundred years of Triassic research in the Alps no new Tuvalian location was discovered. This fact shows how really scarce ammonite bearing Tuvalian rock occurrences are in the Hallstatt limestone. 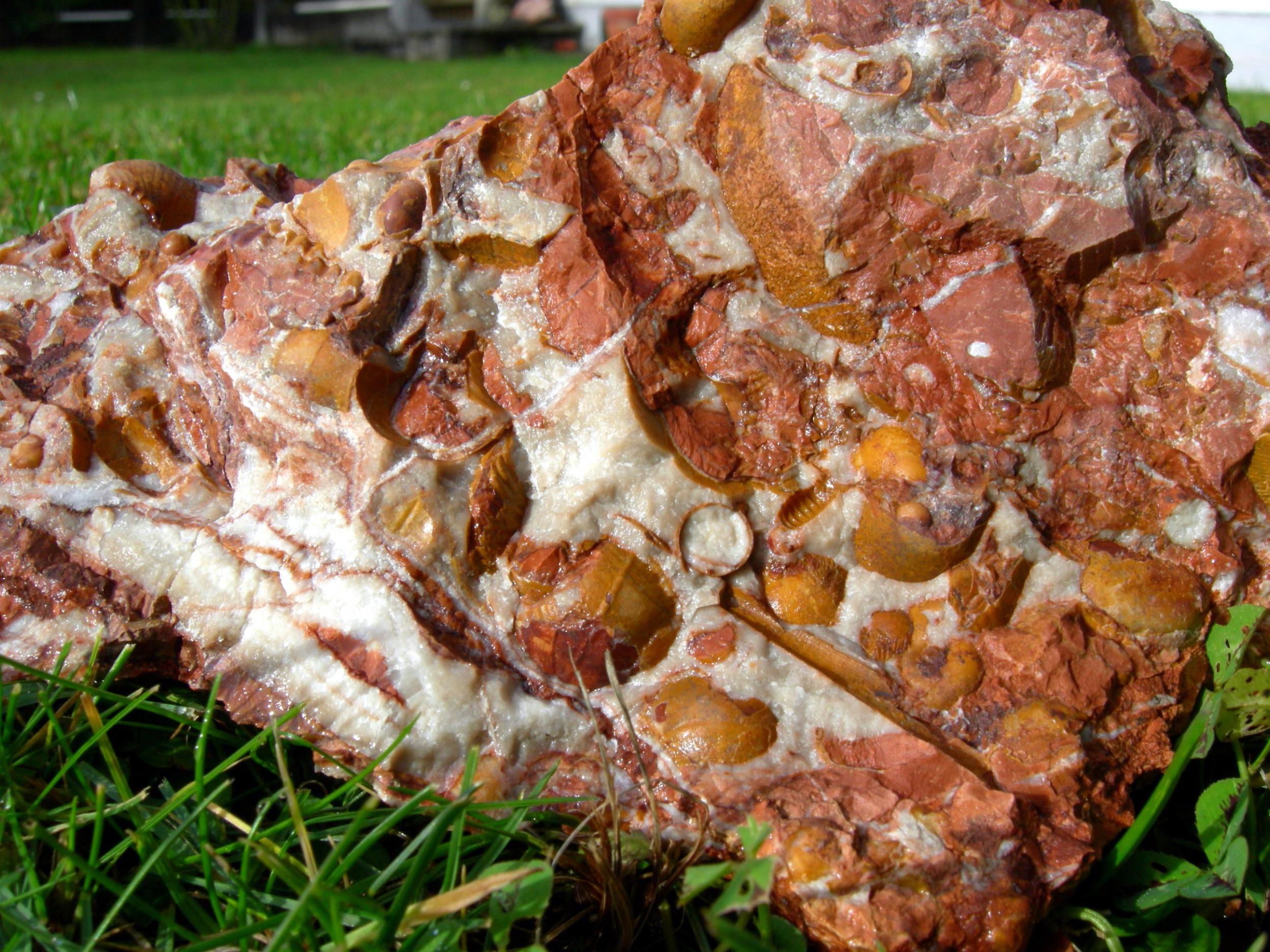 Tuvalian fauna collected at the location "Vordersandling". Size of the embedded Tropites sp. is 1cm. 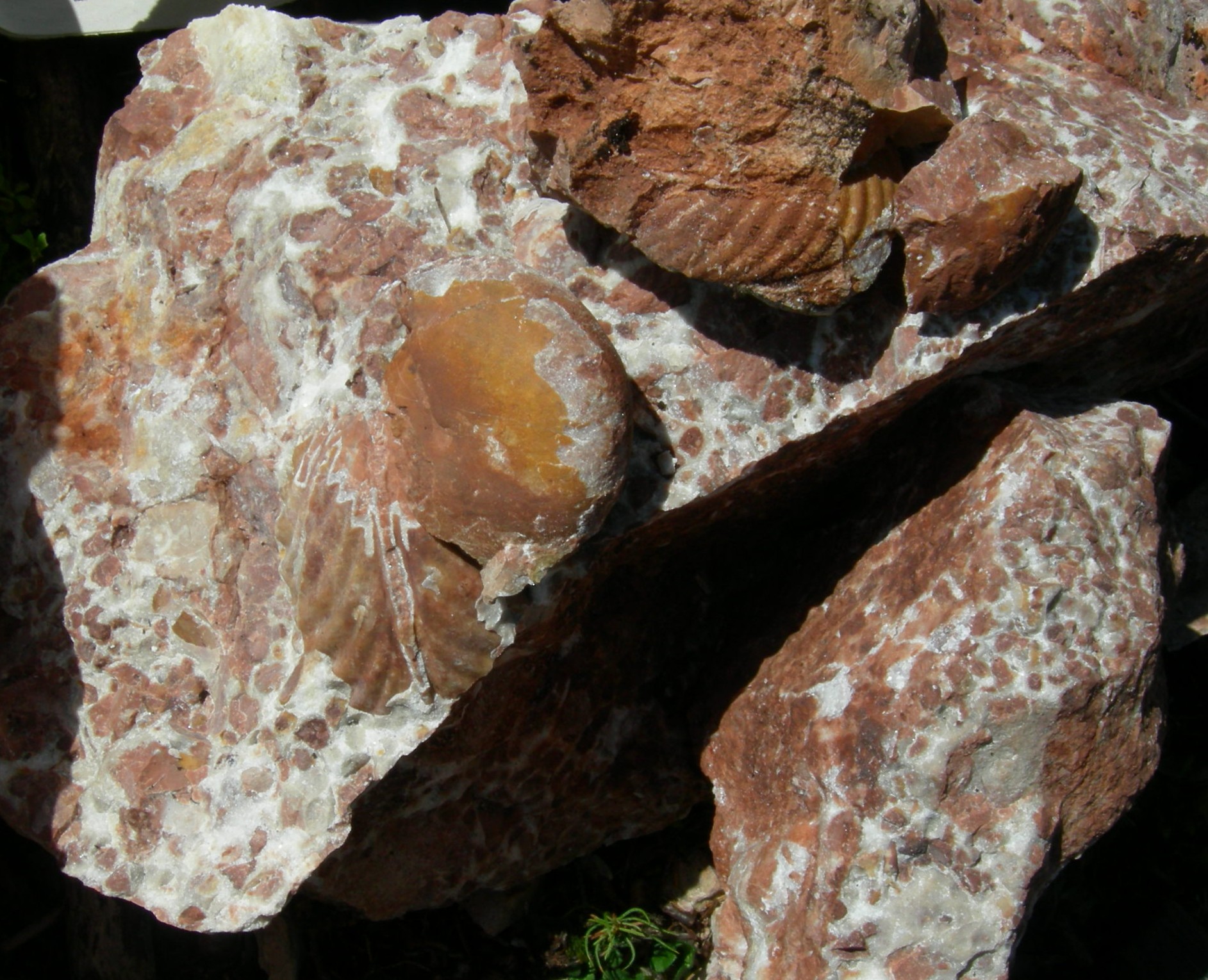 Fragments of Tropites sp. found at the historical location on the Raschberg. Size of the Tropites shell parts ca. 2cm 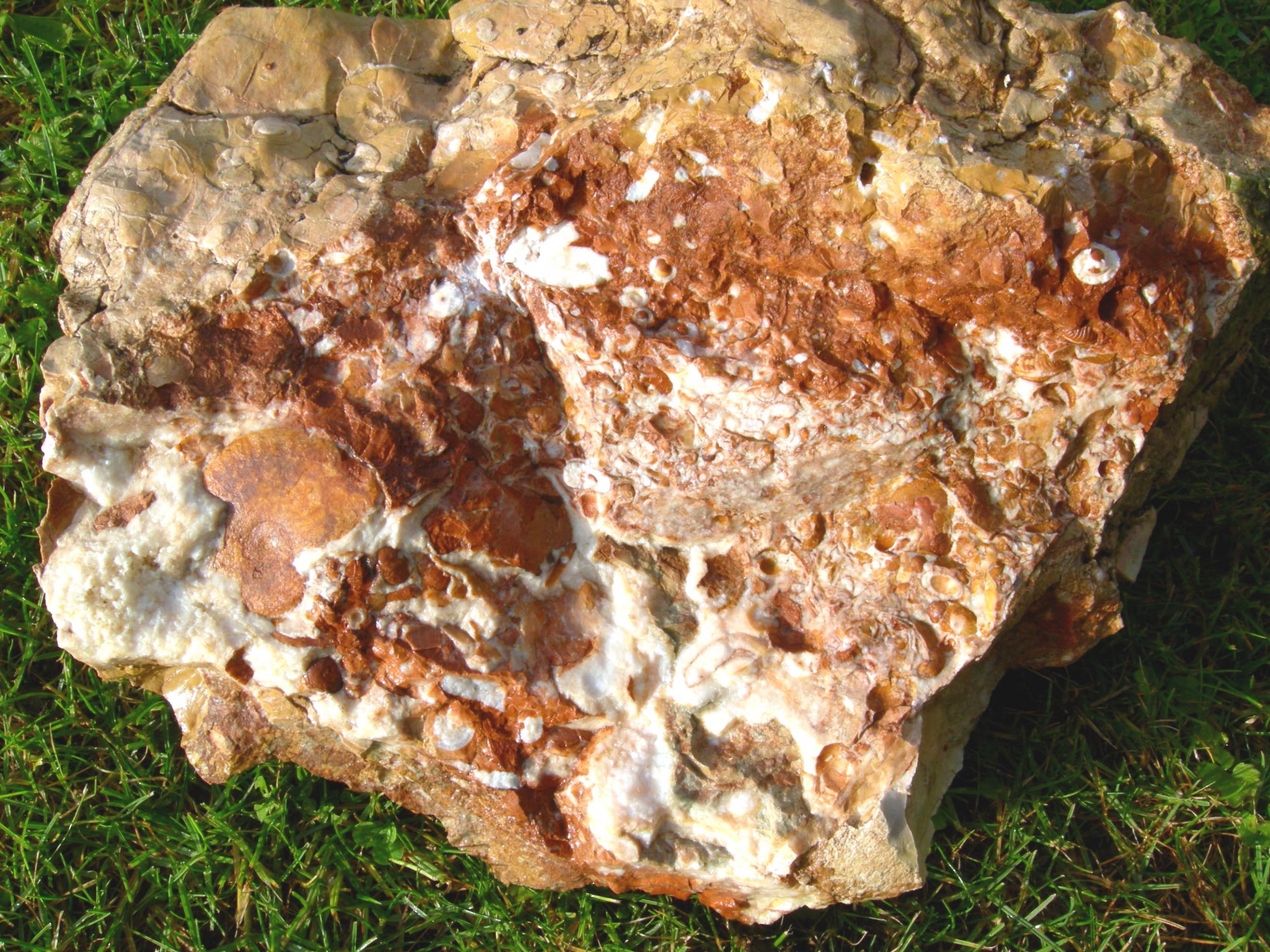 Block with Tuvalian fauna from the Hallein/Berchtesgaden area. Size of the Pinacoceras rex at the left on the Block is 6cm

After the Julian Aonoides/austriacum beds (lenses) a distinct ammonite faunal change appears in the following Tuvalian. Most of the dominant Julian genera disappear at the uppermost Julian. In the Tuvalian roughly 20 new ammonoid genera appear. One trigger for this big faunal change in the Tethys realm was the Carnian Pluvial Event (Reingraben Event). The lenses and layers of the aonoides and austriacum zone were deposited during this time span on the Hallstatt deep swells. A possible (in controversial discussion) rise in temperature of the seawater column at the end of the Julian was the last step of the faunal change.

The last subzone of the Julian is the so called „Sirenites horizon" which is difficult to recognize and determine. 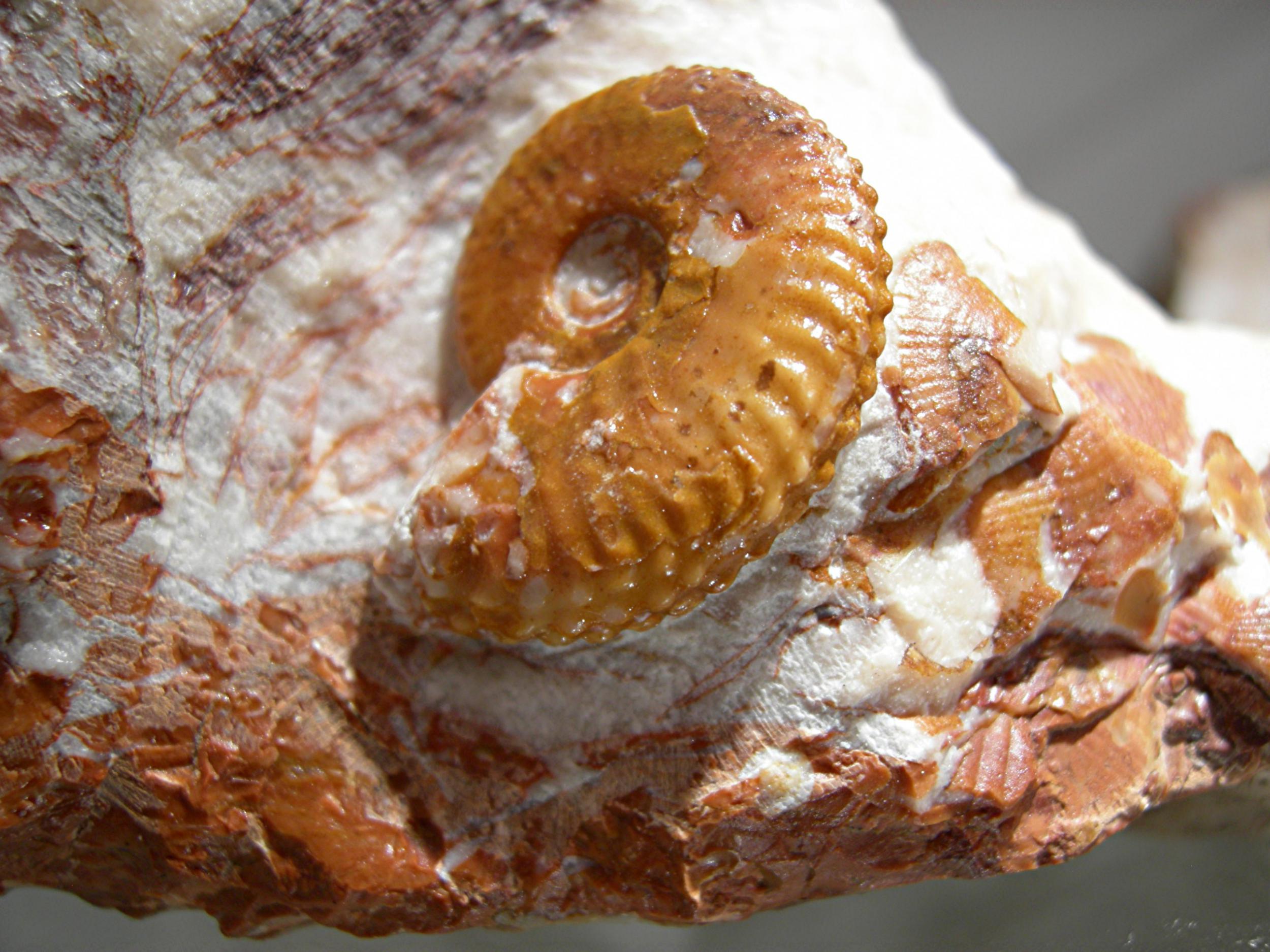 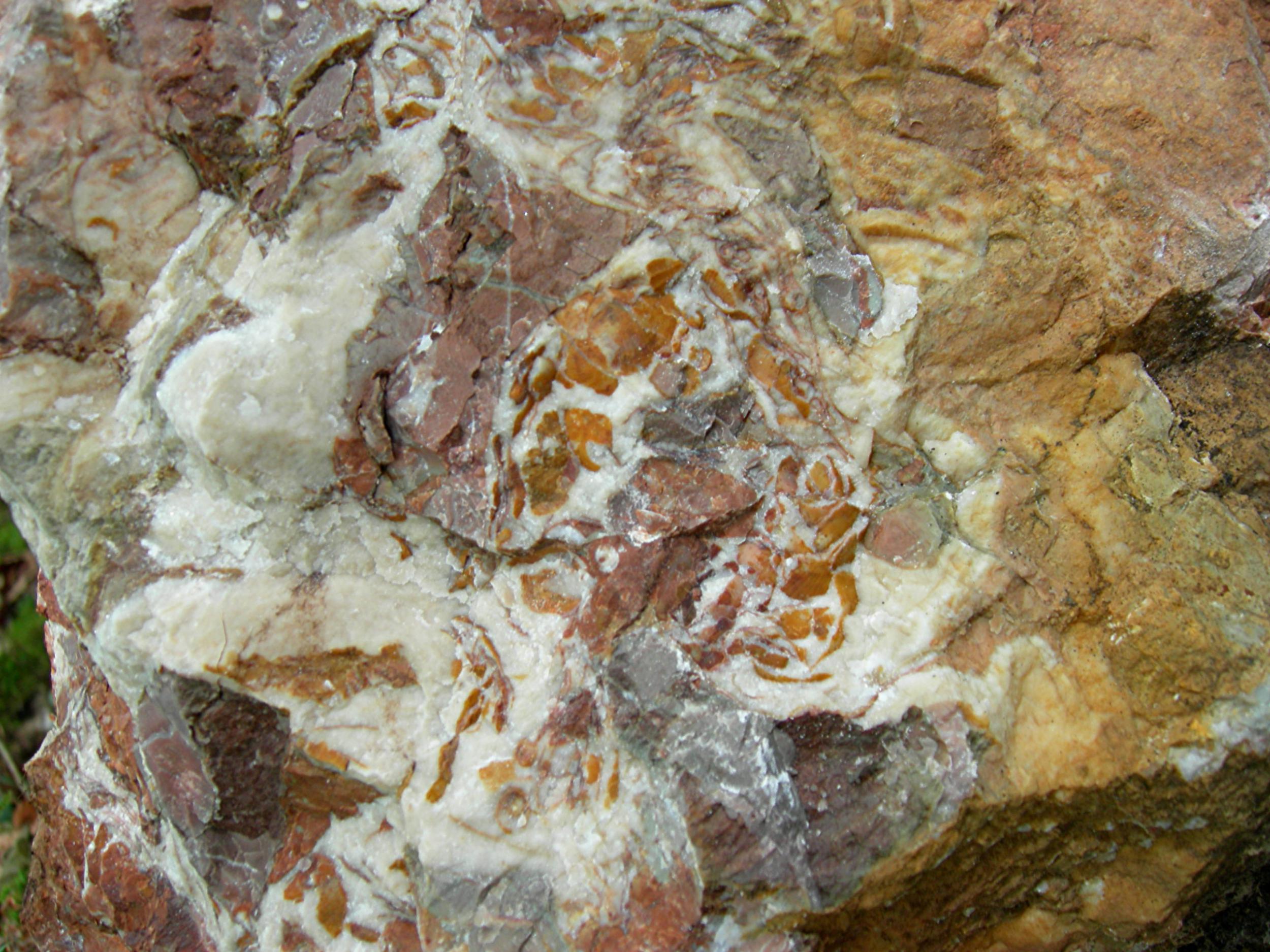 Deformed part of the fossil lens where this fauna comes from.

Visible is the plastic deformation of the rock which resulted from motions in an early diagenetic phase. 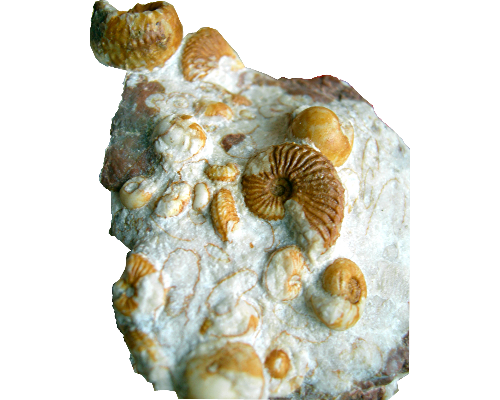 I found a fissure filling of clear Julian age in a tectonically stressed limestone succession below this above mentioned limestone. Remarkable in this location was a clear preponderance of Arcestes sp. which differentiates this location from other Julian locations where normally Joannites sp. is the dominant leiostrake (ammonoids with a smooth shell) genera. 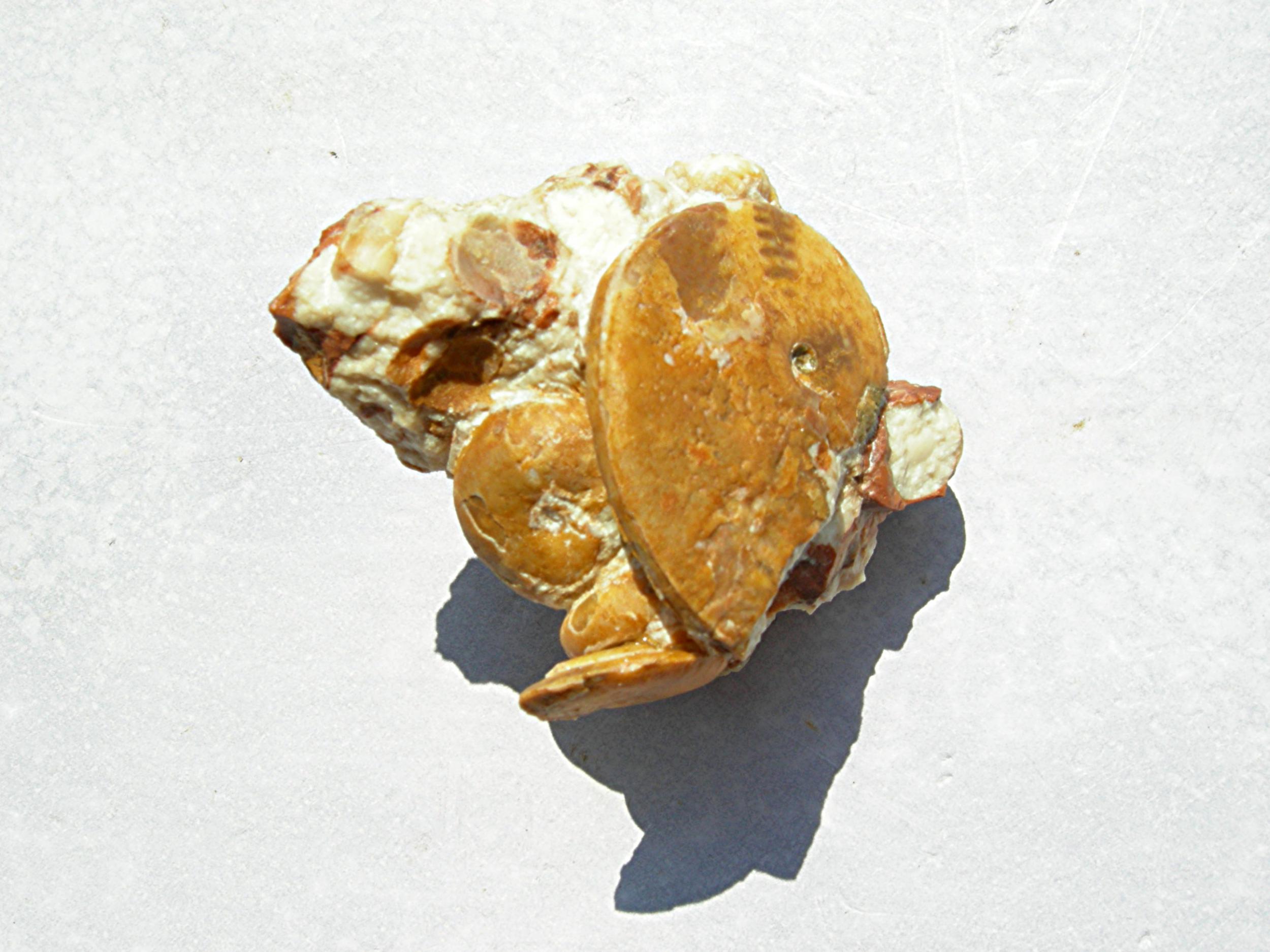 Sometimes historical literature speaks of the beds with Tropites subbullatus. This feature is often close to my own impressions.

In the case of ammonite bearing limestone, nearly the same Lithology is visible at all different locations.

Mostly a succession of grey to red limestone beds which include bivalve beds, rough sparitic and biogenic layers can be observed. Embedded in this succession are fissures and lenses yielding ammonites in micritic fillings.

The faunal compositions of each ammonite lens in this limestone succession changes slightly depending on the level within the succession. Generally the embedded ammonites are mostly small and often of a spherical form. Therefore it is difficult to recognise if it is a real fissure filling or a lens (because of the lens shaped cross section). Piece from a „fissure filling" with Trachysagenites erinaceus on the top

Some of you may ask where the difference is. The most important feature of a lens is the recognition of a nearly normal deposition in which the lens is embedded. In clear fissure fillings this is not given. A fissure can strike through several much older layers in every concievable way and angle.

So it is a matter of fact that all transitions between lenses and fissures are also possible. One can imagine that it is often the personal impression of an author which tends to decide. In the case of talus blocks it is nearly impossible to determine whether a lens or fissure is given because the lateral transition is mostly lacking. Tuvalian deposits in which bedded ammonite layers are visible occur very scarcely. The ammonites within are mostly bigger and often preserved with body chamber. The typical hash feature of other Tuvalian lenses is lacking there. 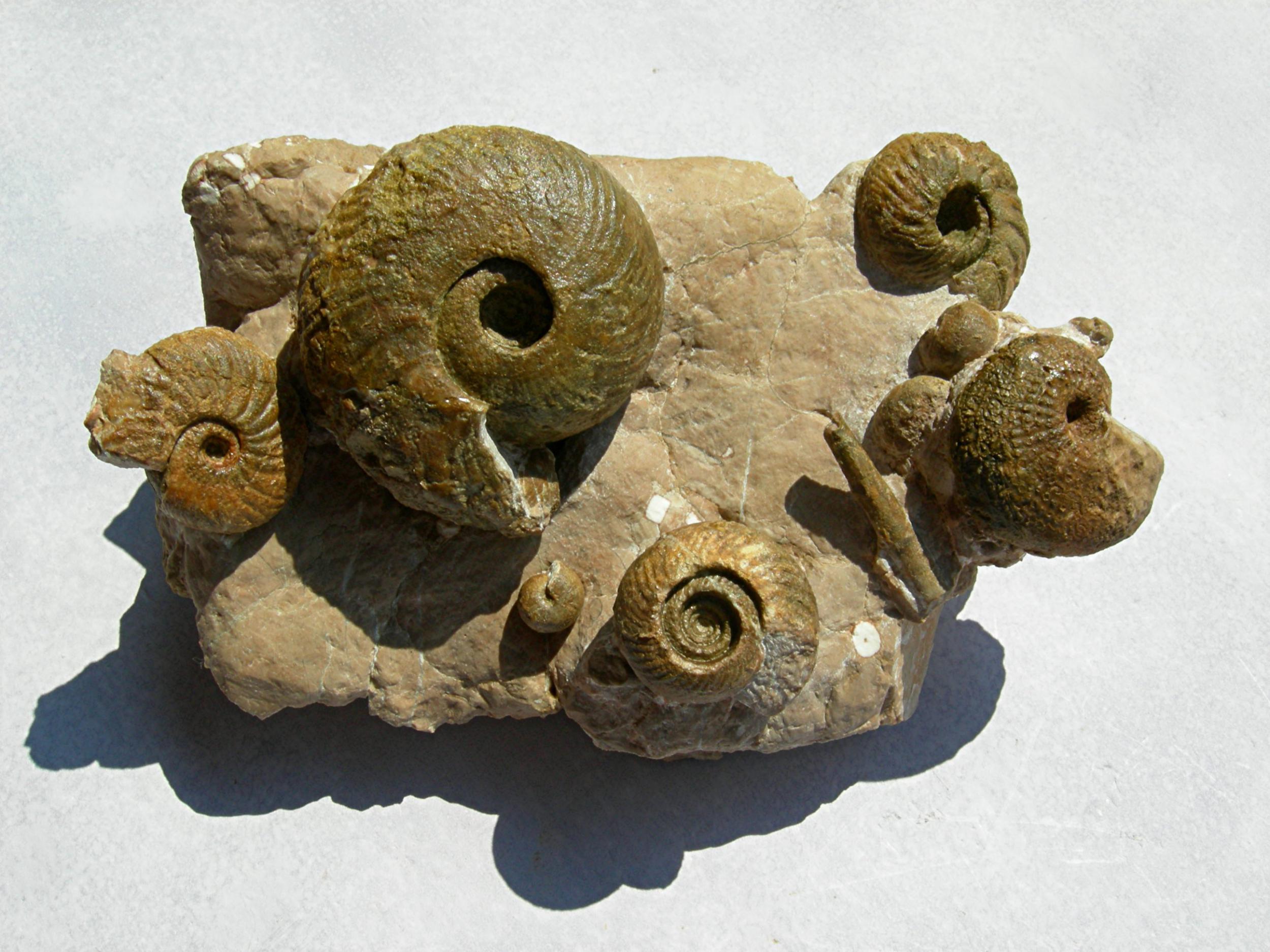 This untypical Tuvalian fossil slab with Tropites torquillus (big ammonite) was found in a big lens/layer location. Prep work was done from the lower side. The high biotic parts of normal Tuvalian rock are mostly lacking in such big lenses. The ammonites at this location are dissolved on the upper side and were embedded in a strongly condensed limestone succession which laterally runs out after several meters. Also the ammonites were bigger and preserved with body chamber in such big lenses. Some layers are enriched with crinoid stem fragments. 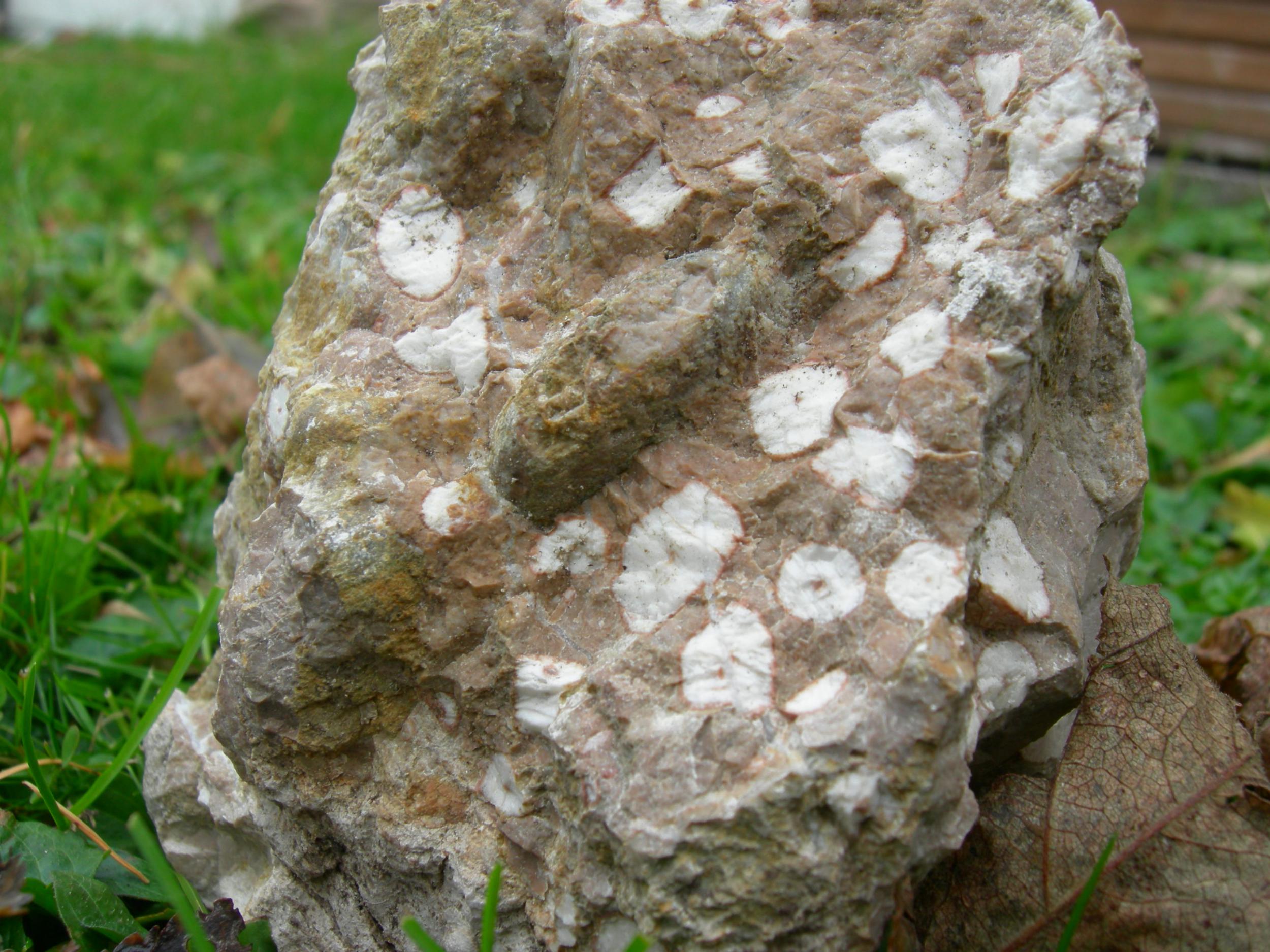 Rock from above mentioned location with a visible curve of an ammonite. 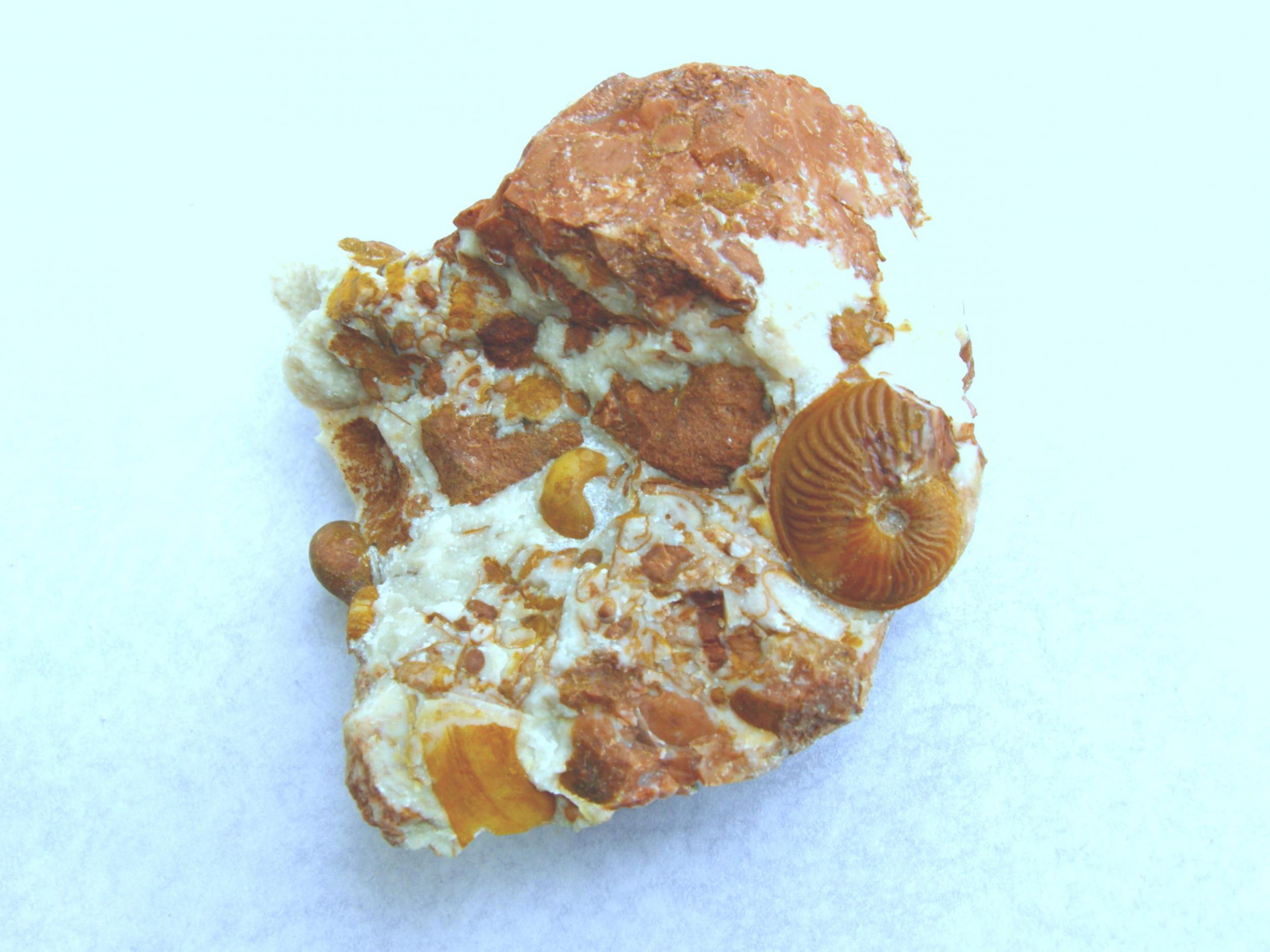 How to find the historical locations?

Searching for old locations in historical literature has its own thrill. Finding such spots after having completed preparatory research is a very pleasant and pleasing experience. I found the historical location on the Raschberg Mountain, which was unknown to me, years ago after a long search in the field. The old location was only visible through a small man made hollow on the ground which was only discernable with a large amount of fantasy. Because of the fitting of the surrounding limestone with other Tuvalian locations known by me, I looked closer and thereby discovered it.

Such adventures make geological history alive and one gets plenty of experience and knowledge. 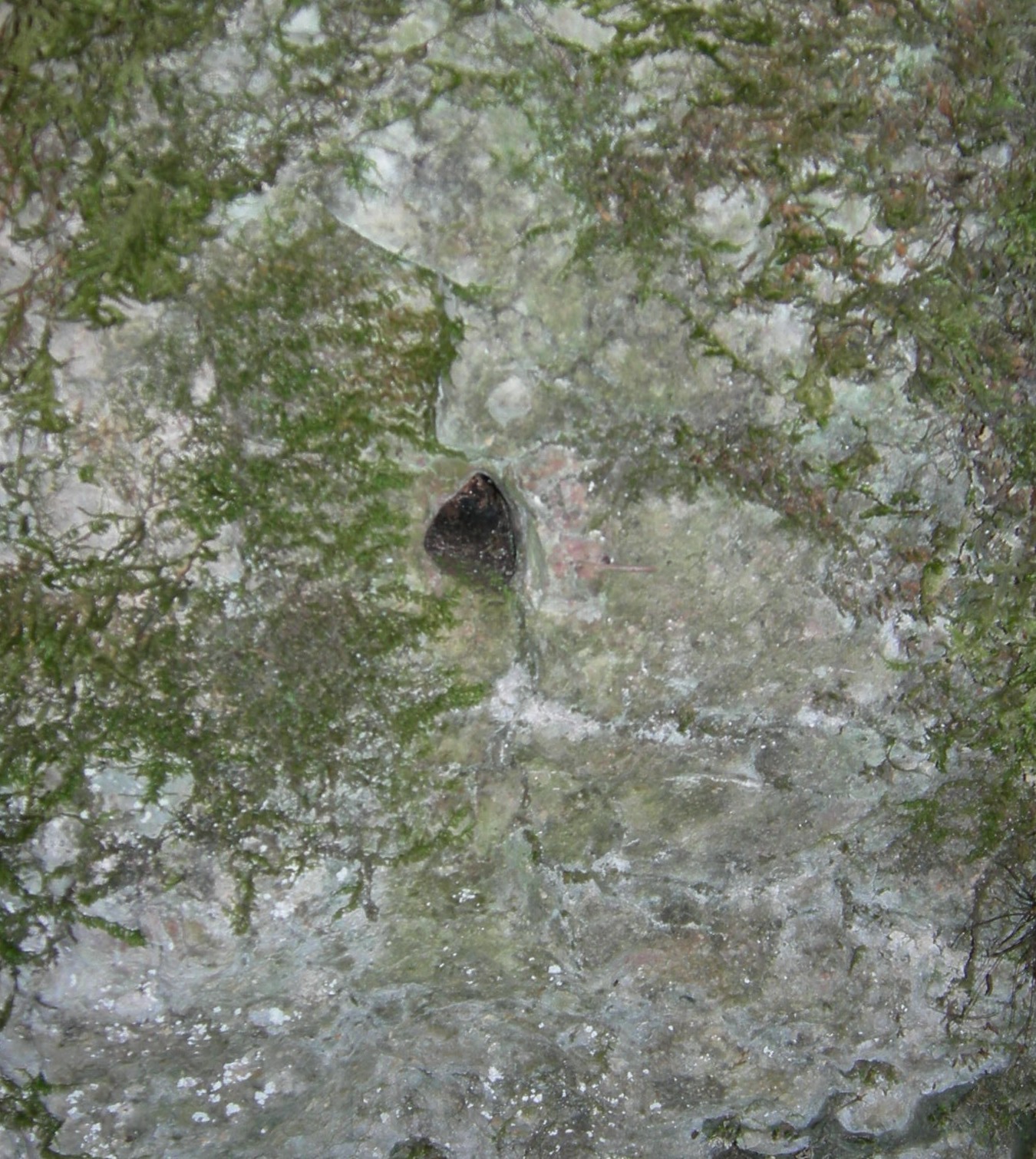 Old hand-made drilling hole at an historical Tuvalian location. This is visible by the oval cross-section of the hole, which was created by the continual pendulating of the driller-chisel by hand.

Smaller pieces can still be found at the historical locations. But only when the location is well known and when one is willing to hike for a few hours.

The most important rule for collecting this limestone is the fact that there are no rules! Everything is possible. The whole Tuvalian can be only a few meters thick at one point and then a few steps farther on its thickness can multiply enormously. Thickening and thinning out of limestone beds within very short distances are the normal case. The paleo relief of this former Triassic ocean floor was too narrow spaced and too differentiated for the deposition of an undisturbed succession of limestone. Therefore a correct stratigraphic succession exists only on paper.

This was a modest view into my special world of collecting. I hope you enjoyed reading it.

I thank Fossil Forum member Ludwigia for correcting my uncivil kind of English.