Many of my posts have mentioned the work of Wendell Cooke Mansfield, one of the giants of early 20th century molluscan paleontology. Among his many accomplishments as a geologist with the United States Geological Survey, Mansfield was the first to publish a biostratigraphical zonation of the Yorktown formation (posthumously in Julia Gardner’s Yorktown publication), describe Pliocene fossils from the sands and limestones which were coming to light in South Florida during the construction of the Tamiami Trail and continued the work of William Healy Dall on the fauna from Miocene and Oligocene limestones near Tampa. I consider his description of the fossil shells found exposed in the creek and river bluffs of the Florida panhandle as his most lasting work. First described as the Choctawhatchee Formation in a series of Florida Geological Survey manuscripts that Mansfield published in the 1930s, he recognized the similarity of the shell bed fauna in the Florida panhandle to that of the Yorktown and Duplin Formations further north. At the time the panhandle faunas were thought to be of Miocene age and divided into the Yolida, Arca, Ecphora, and Cancellaria fauna zones. Subsequent research has revealed that the upper two zones, the Ecphora and Cancellaria are in fact Upper Pliocene and contemporary with the Yorktown, Duplin and Tamiami Formations. The two beds are now combined and called the Jackson Bluff formation for the classic site on the Ochlocknee River. The formation is regionally limited to a three county area in Northern Florida.

I first collected the Jackson Bluff Formation in 1991 by permission to a site managed by the Nature Conservancy. The high bluff on the Apalachicola River exposes both the Lower Miocene Chipola Formation as well as what was once called the Ecphora Zone of the Jackson Bluff Formation. I have since revisited this site (Locality 471) twice, once this year and in 2011. The dark grey sand of the Jackson Bluff Formation here represents a back-bay environment much like that behind the barrier islands along today’s Northern Gulf Coast (Figure 1). This particular site is dominated by the turritellid Eichwaldiella alumensis and the bivalve Mulinia congesta. Other species occur here but are much scarcer in numbers. 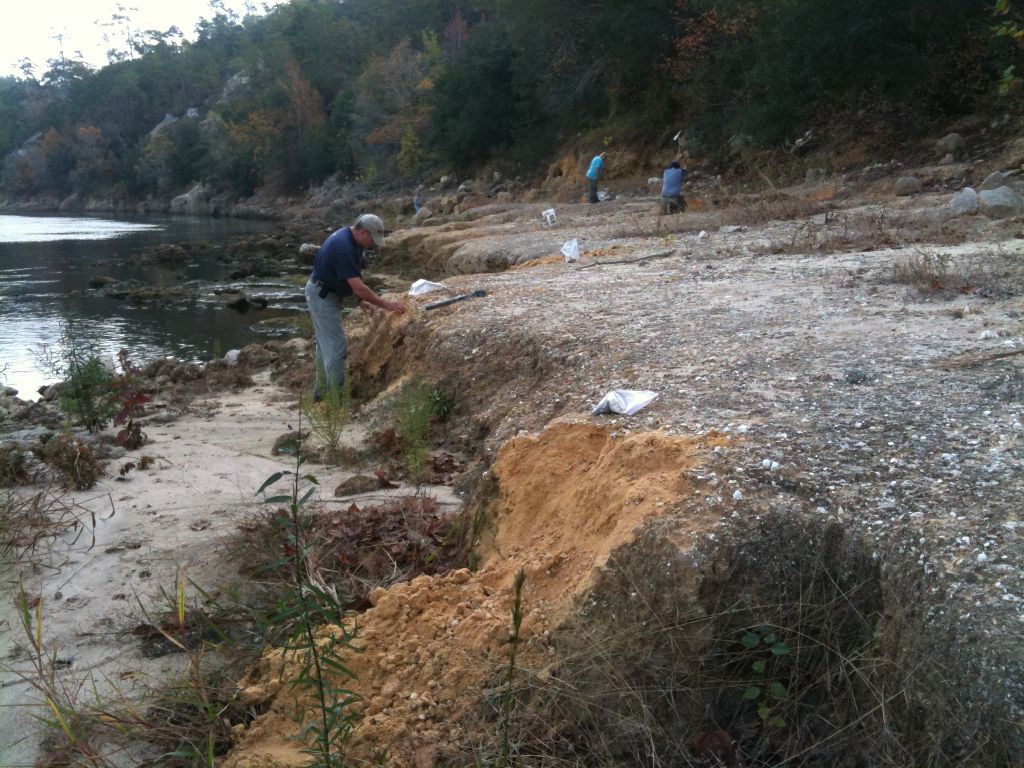 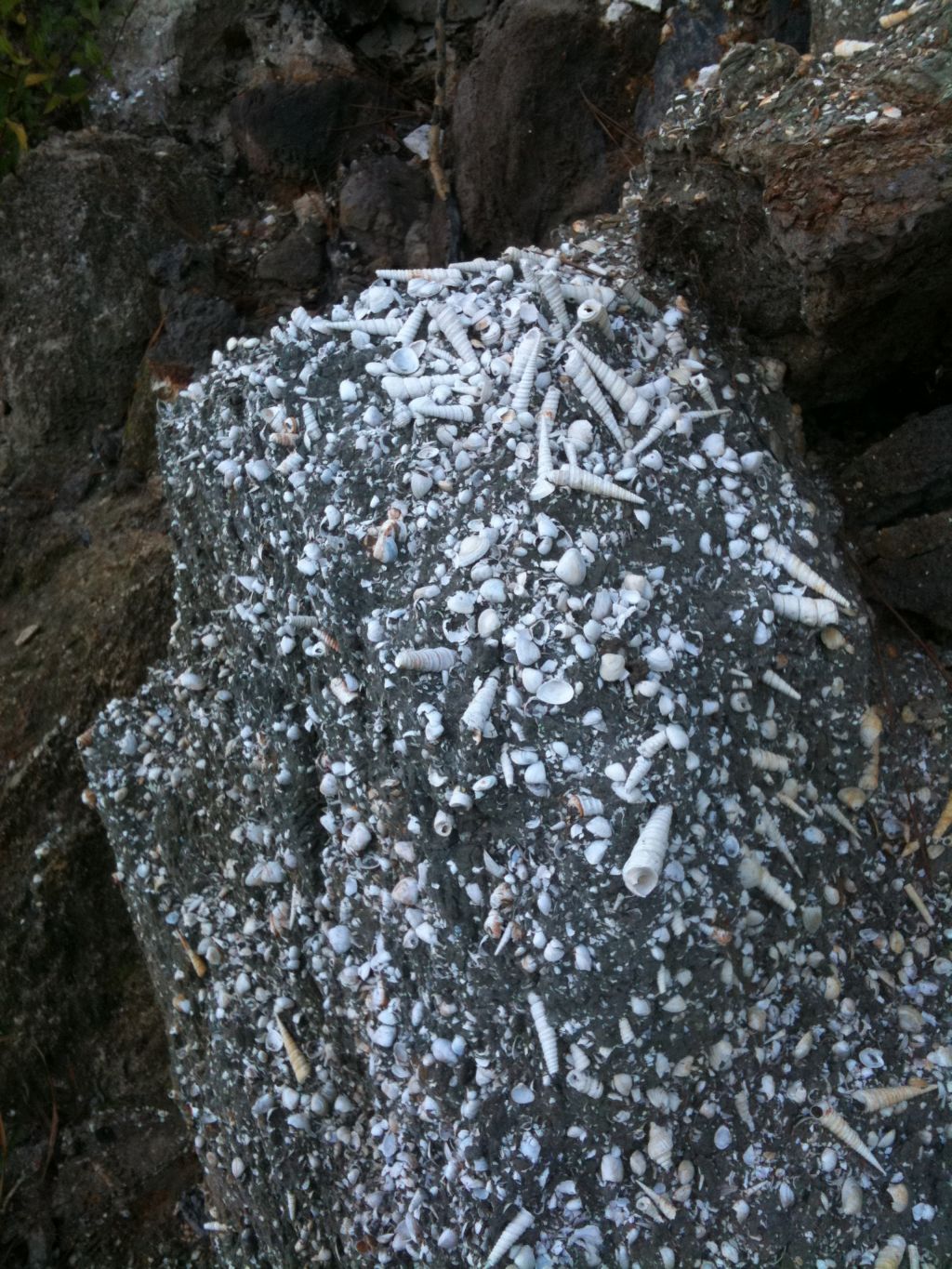 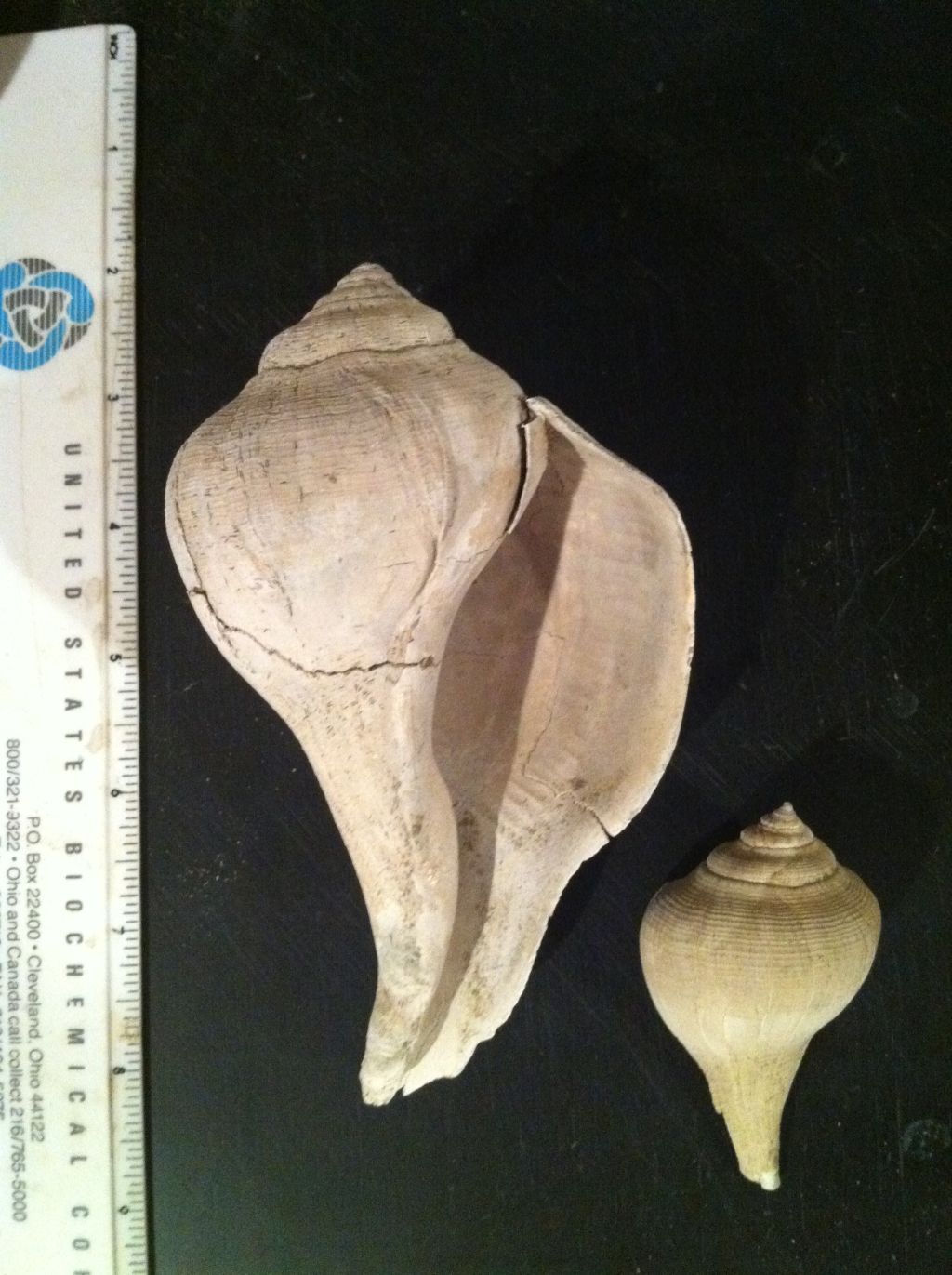 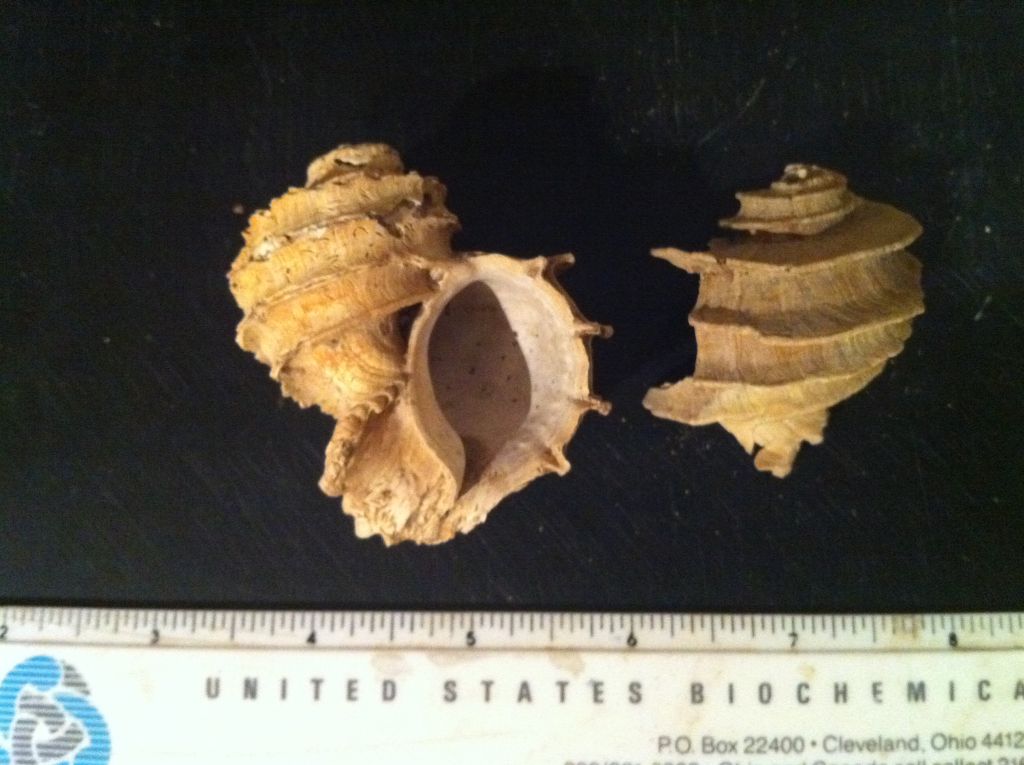 New to my collecting endeavors was my Locality 1018 which I visited in 2011 and 2012. This site on the Ochlocknee River once exposed both shell beds of Jackson Bluff. Subsequent weathering and overgrowth has obscured the upper bed but blocks of the lower bed originating from high in the bluff, litter the river shoreline (Figure 2). The same species occur at this site as the previous however, the diversity is much higher as it was deposited in an open marine environment. The sediment here is sticky red clay marl which indicates that that the deposition of this bed was influenced by the ancestral panhandle rivers. Like the red Georgia clay that I am familiar with, this sediment stains everything rust brown and is tough to clean from the fossil shells. 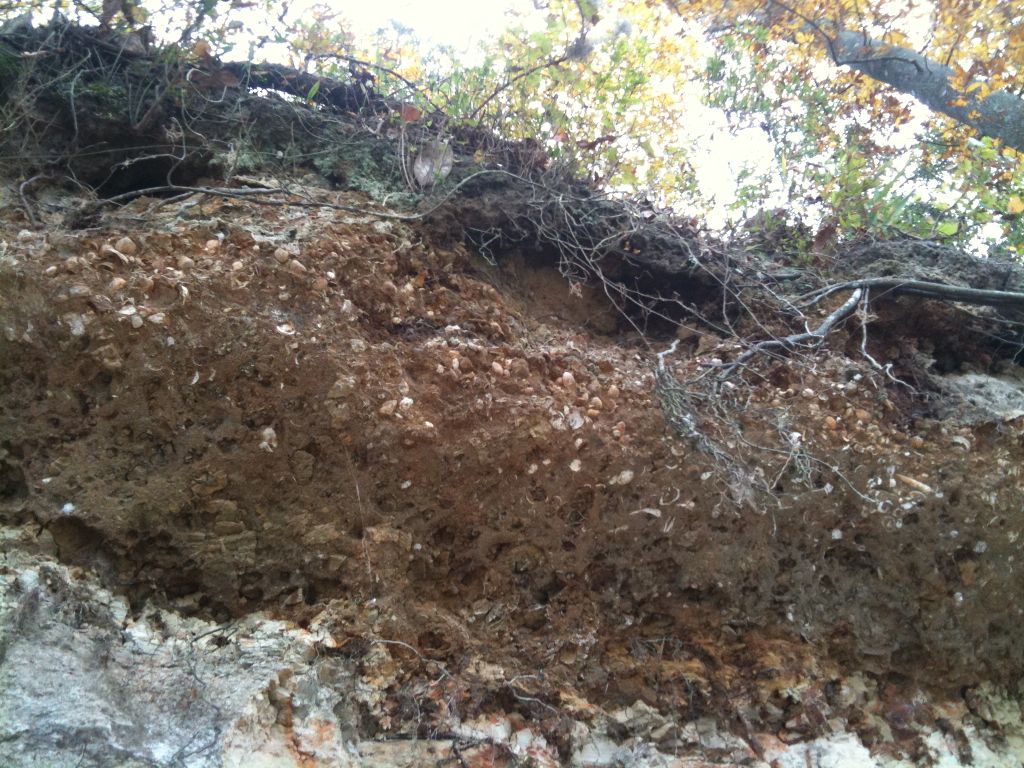 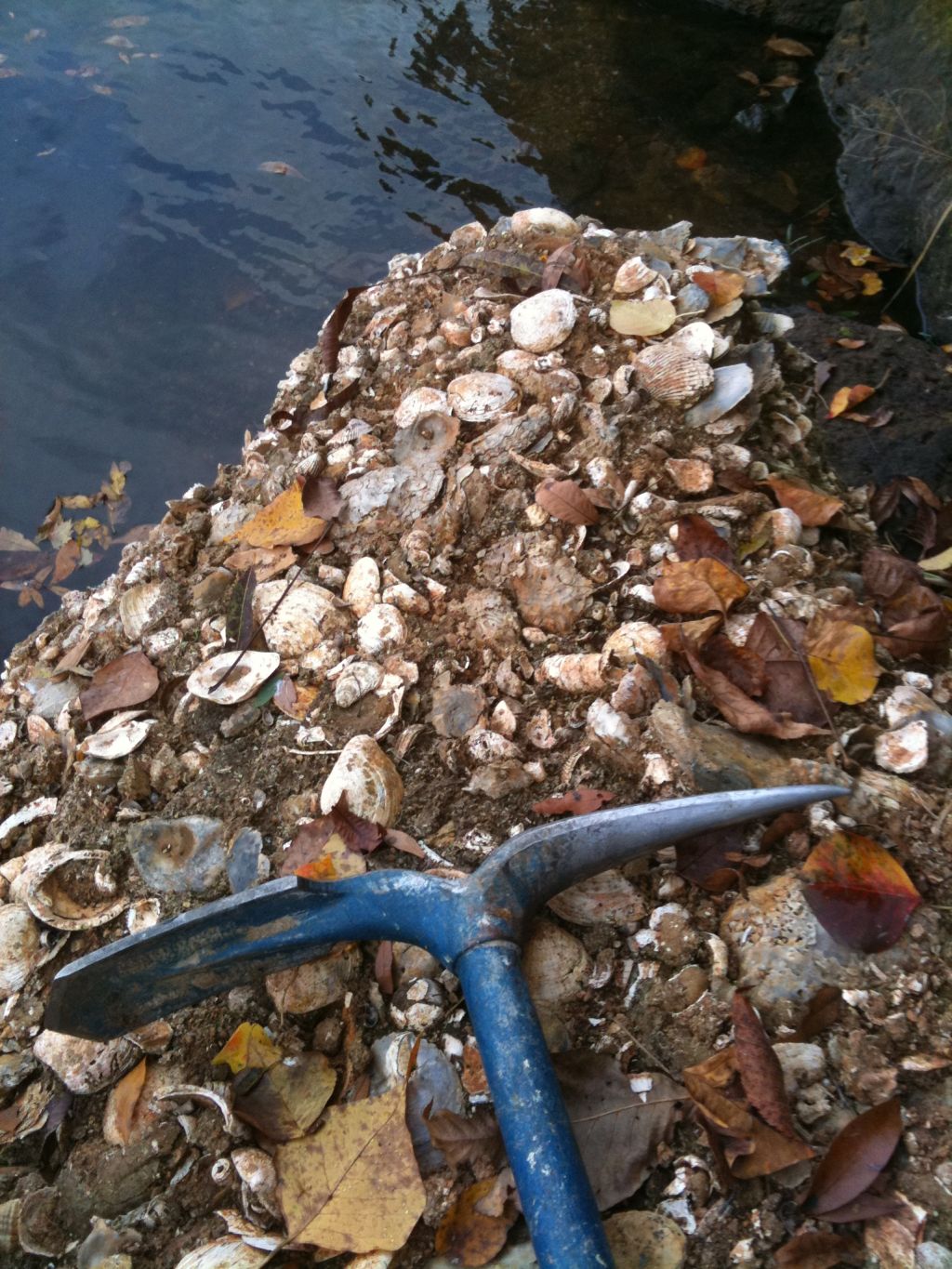 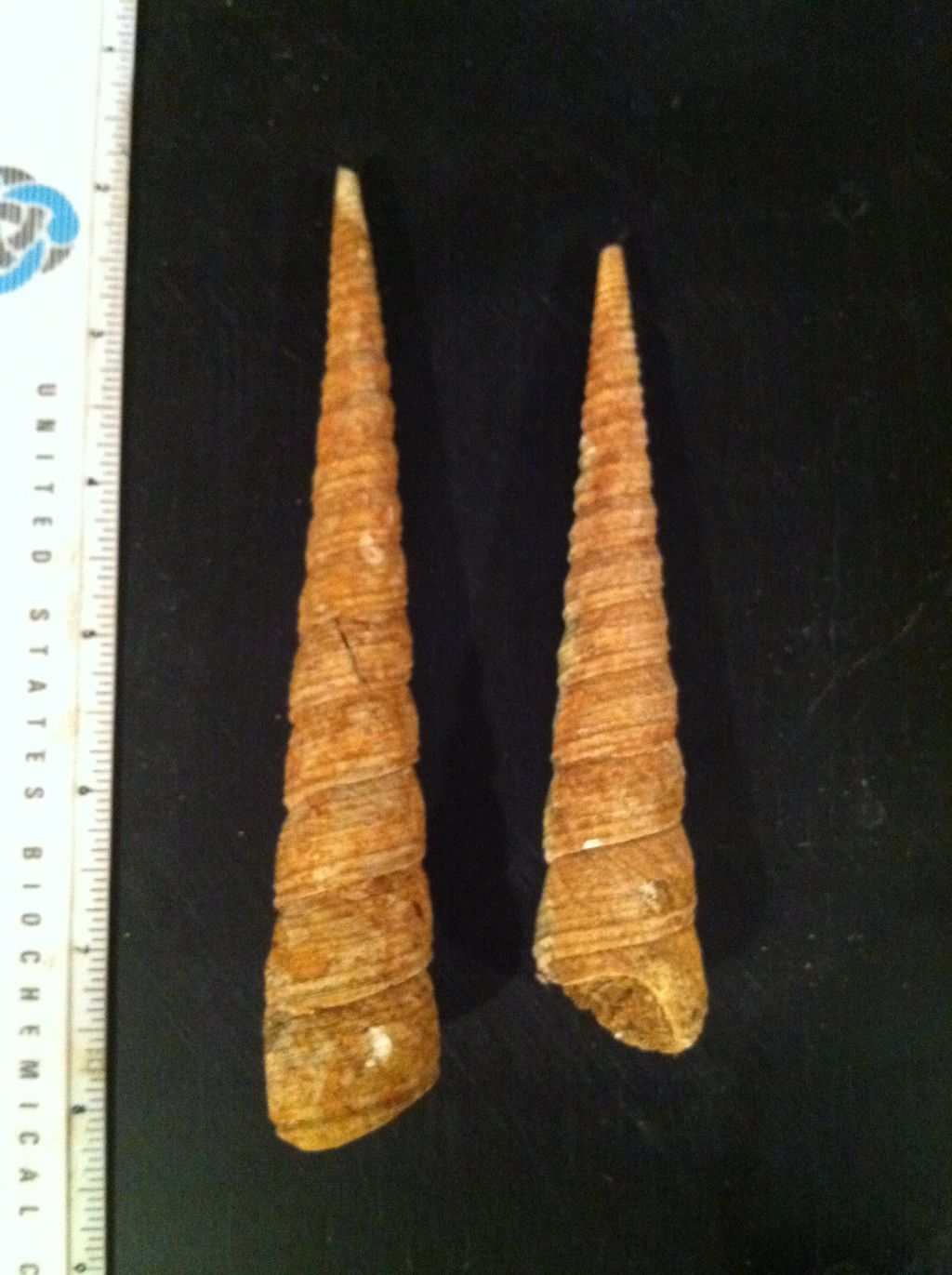 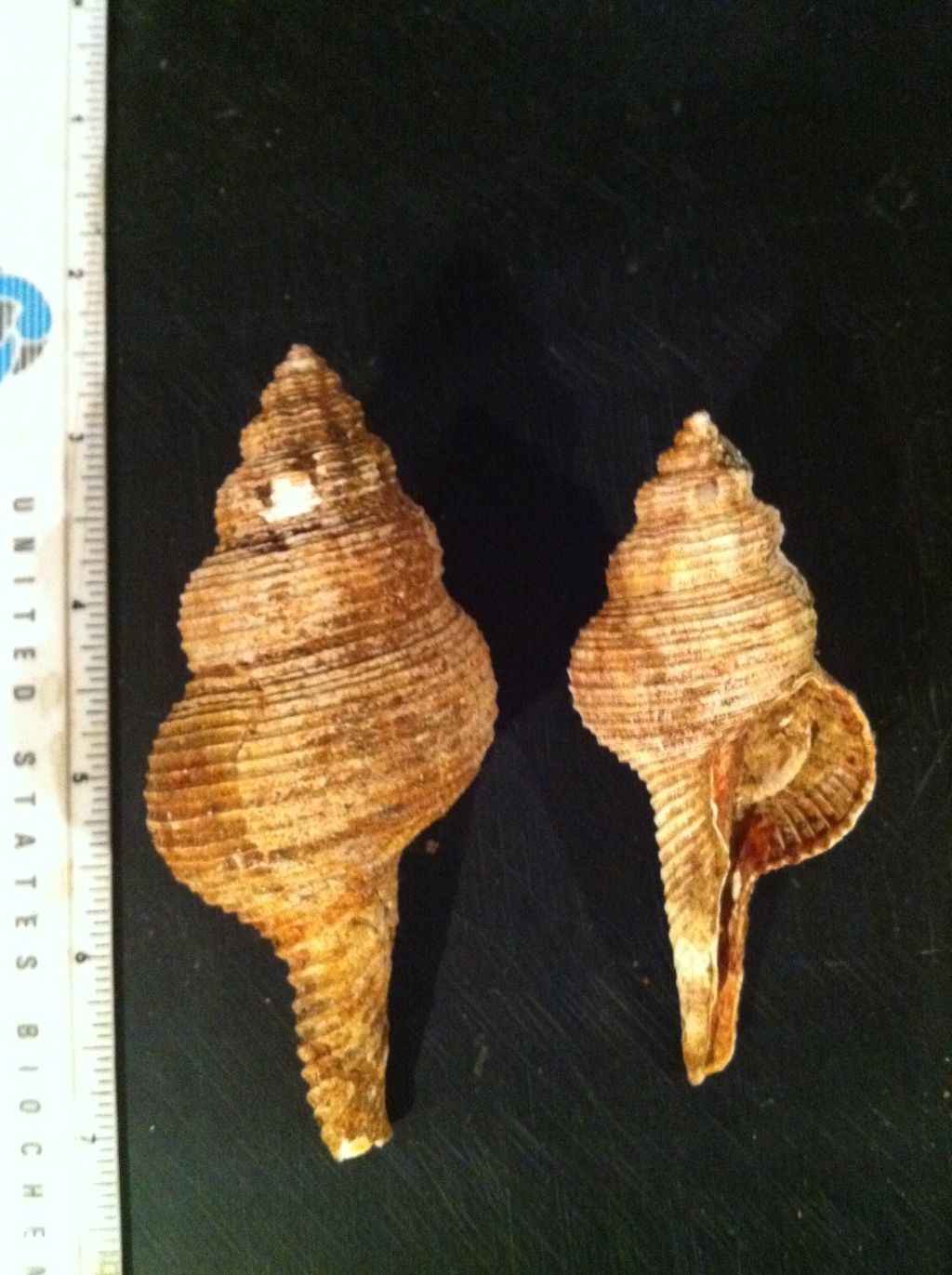 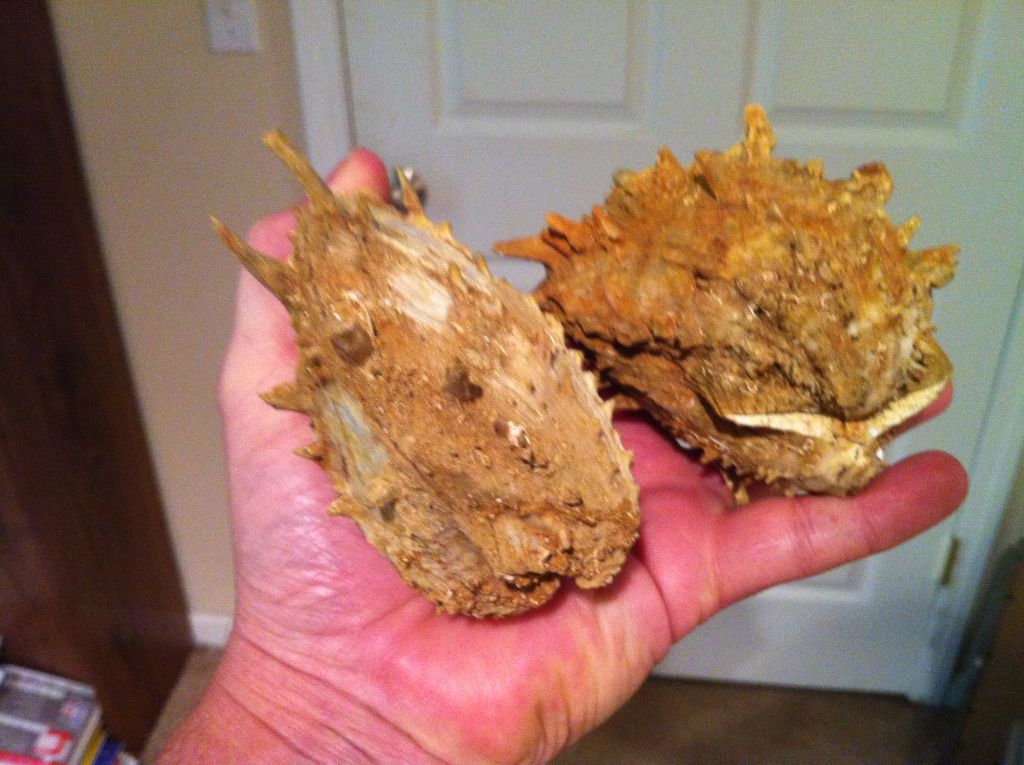 In several of my earlier posts, I described the environmental histories of the eastern Atlantic Pliocene deposits. Early in the Pliocene, South Florida water temperatures were much cooler than today. By the Late Pliocene ocean temperatures warmed to about the same temperature as in today’s Gulf of Mexico possibly due to the beginning of the permanent emergence of the Isthmus of Panama and the formation of the gulfstream. In the panhandle region of Florida conditions were much different as there was not as much of an effect from the proto-gulf stream. This is evident by closer similarities in the Jackson Bluff fauna to the Mid-Atlantic Yorktown fauna than to the Floridian Pinecrest although the Jackson Bluff does share species from both. 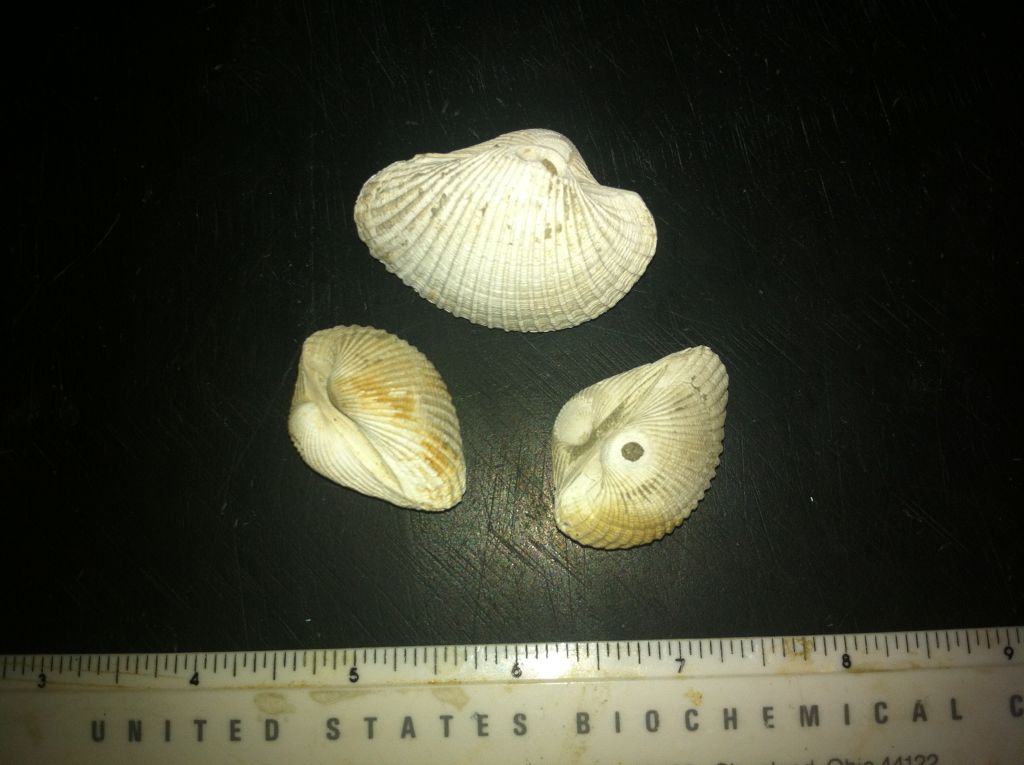 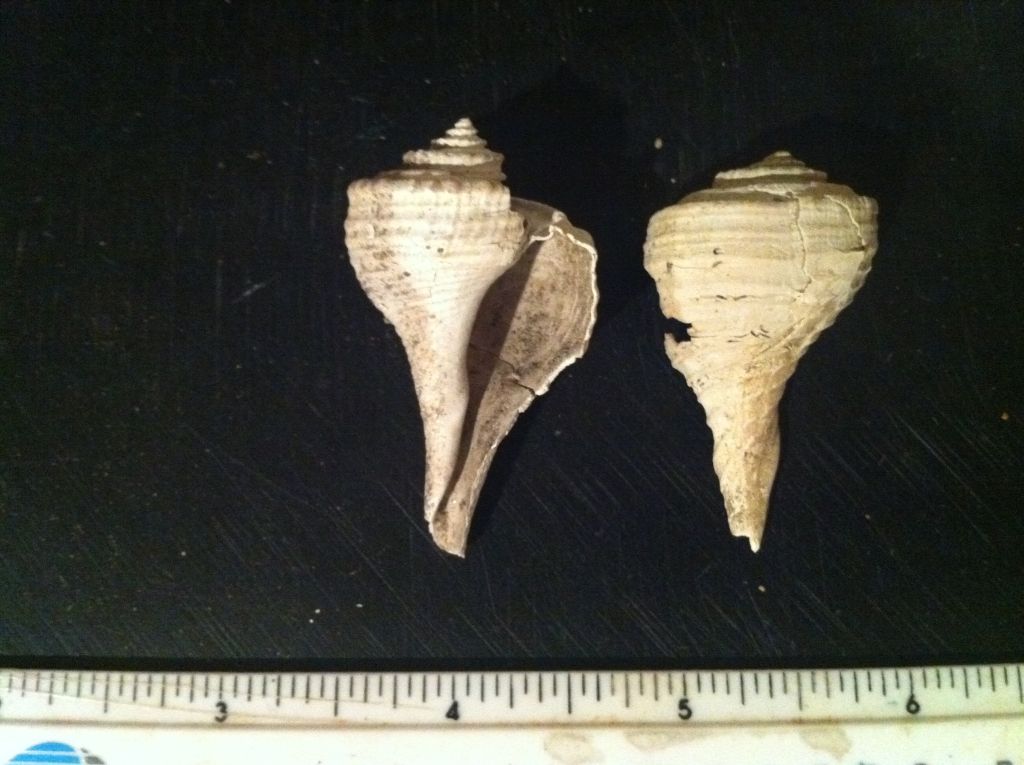 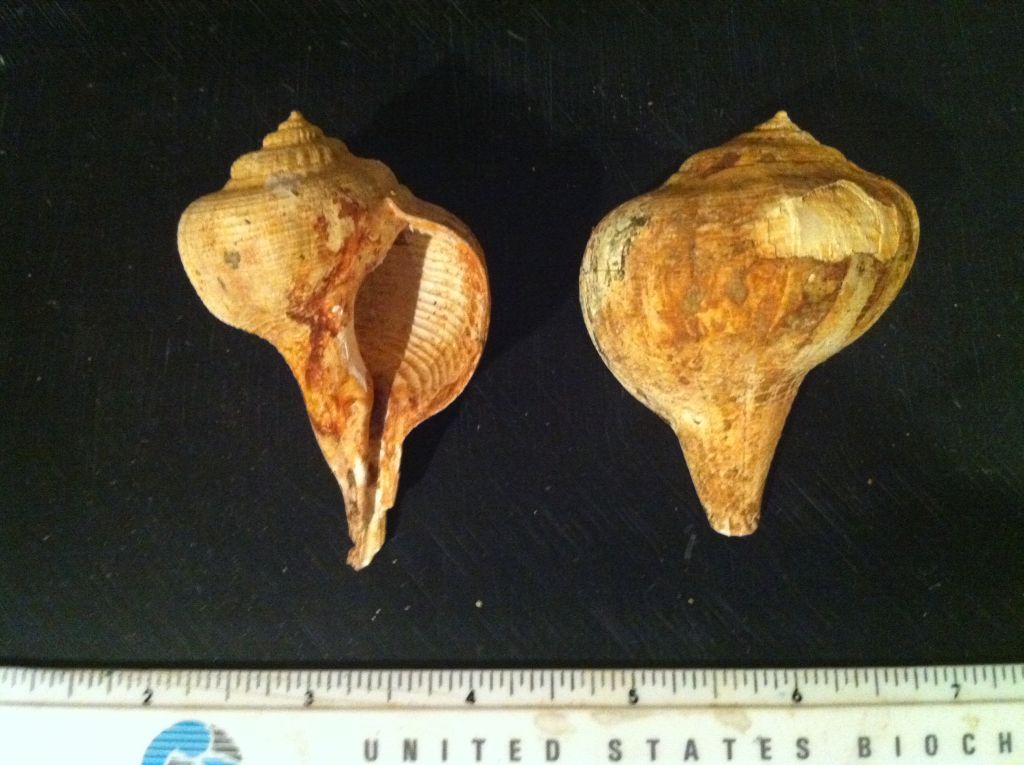 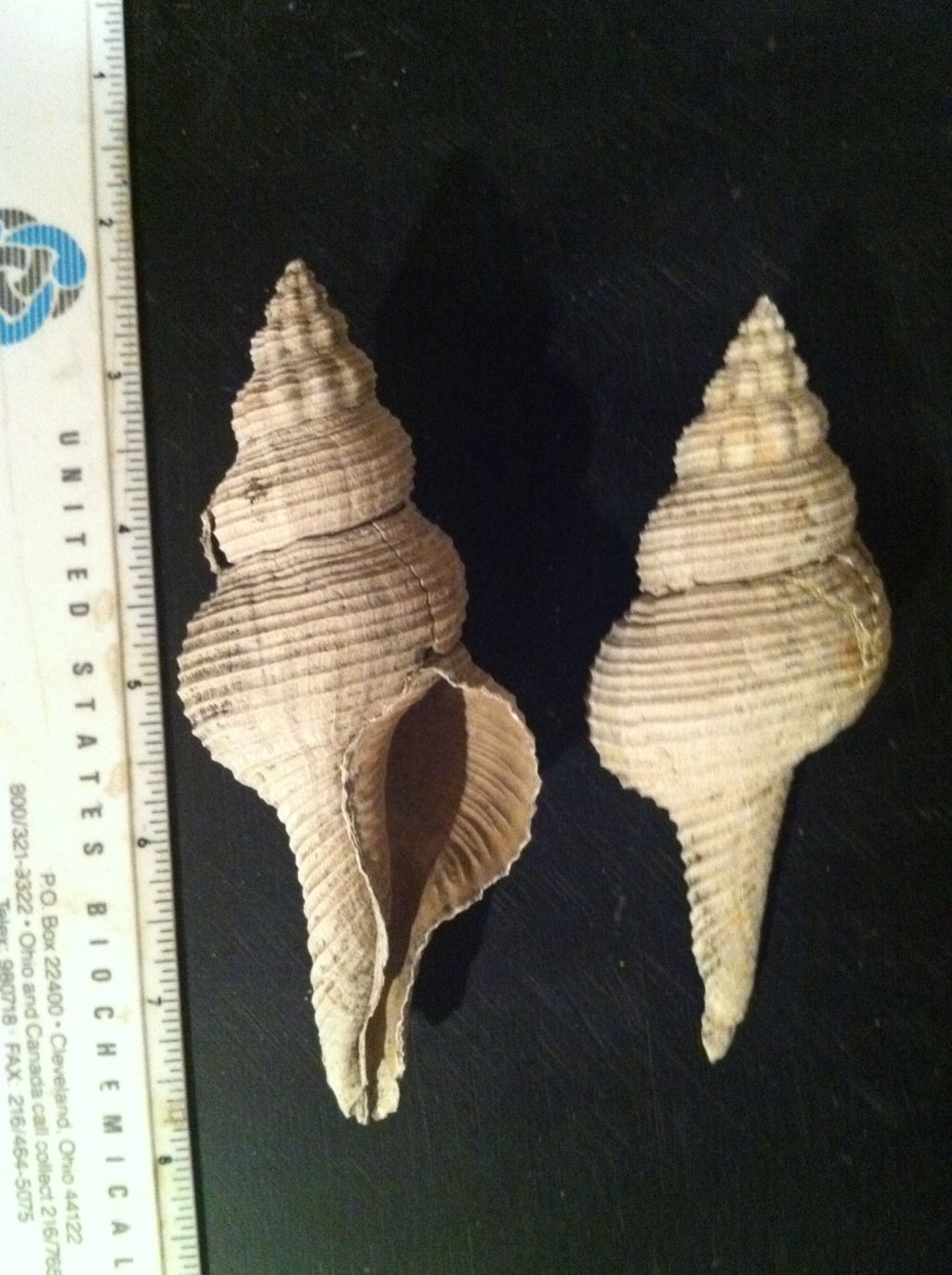 When Mansfield first described the Ecphora zone fauna he recognized slight differences between species of the Jackson Bluff and the Yorktown. As a result, he named many new subspecies of existing Yorktown mollusks. In his 1975 and 1993 works, Lyle Campbell, whose publications I follow extensively, synonymized many of the species and subspecies of the Jackson Bluff with those of the Yorktown. Although I agree with most of his assessments some of the species differences are so consistent and isolated to the Jackson Bluff Formation, that I have kept some Mansfield’s original identifications (Figure 3). The difficulties that I had in identifying the Jackson Bluff fauna are demonstrated in my efforts to name Cancellaria depressa. In 1856 Tuomey and Holmes identified Cancellaria depressa from the Duplin Formation of North Carolina. In 1919 Aldrich and Gardner described Cancellaria tabulata also from the Duplin; similar to C. depressa but with a lesser amount of both spiral and axial sculpture. Mansfield figured Cancellaria tabulata from the Ecphora Zone in 1930 although it appeared identical to C. depressa figured by Tuomey and Holmes. I have a species of Cancellaria in my collection from the Pinecrest of South Florida that strongly resembles Gardner and Aldrich’s C. tabulata; however Campbell synonymized it to C. depressa in 1993. In his 1994 Atlas, Petuch who defenestrates traditional systematics by elevating every subgenus to genus and every subspecies to species without explanation, even agreed with Campbell. In the same publication, Petuch figured from the Pinecrest, Cancellaria plagiostoma bearing a strong resemblance to Aldrich and Gardner’s C. tabulata. Petuch’s photo of C. plagiostoma however, does not resemble the same species described by Campbell, a small (6 mm) shell found only at a single Yorktown location on the James River in Virginia. At first I was tempted to call the Jackson Bluff population C. depressa and the Tamiami population C. tabulata; in effect, disagreeing with Campbell’s synonymy and discounting all of Petuch. The advantage of working with a museum collection is the large number of specimens from multiple locations which allow a researcher to compare variation from one population to another. Although I do not have the proper credentials or live in the vicinity of a major research museum to perform a similar comparison, I do have a relatively large collection from multiple locations to work with. Specimens of C. depressa that I have collected from the Yorktown appear have the same general shape to those specimens that I have from the Jackson Bluff and Tamiami but an intermediate sculpture between the two. Confused? I get that way myself. In the meantime I have classified all three populations as variants of C. depressa until future work can prove otherwise (Figure 4). 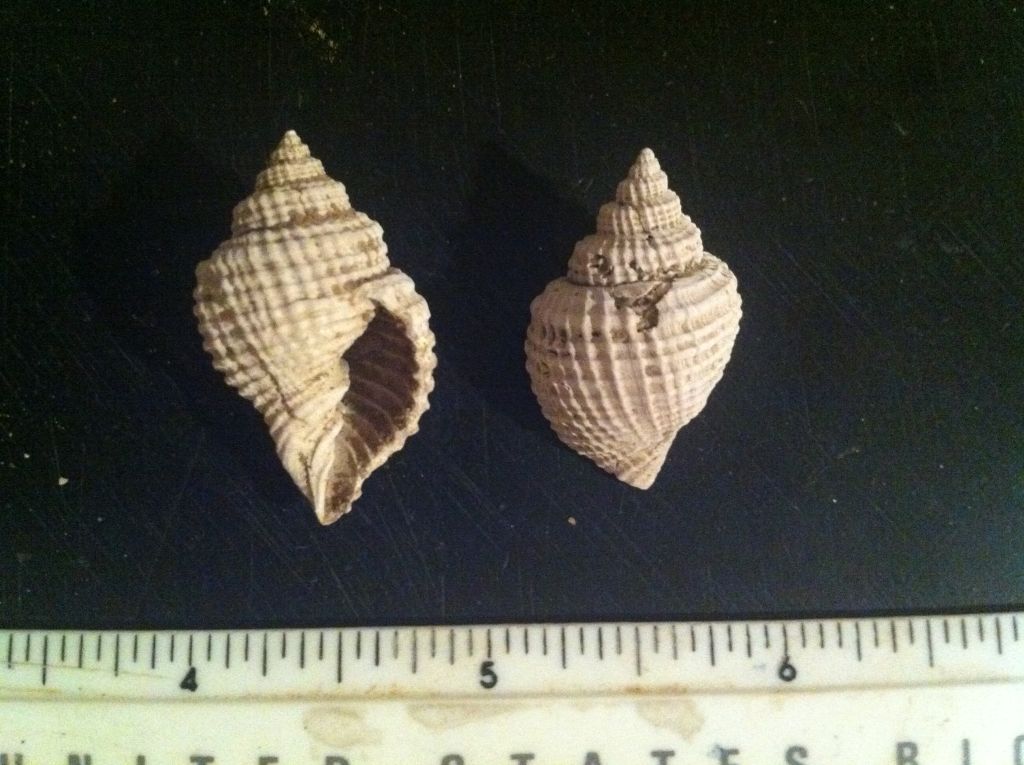 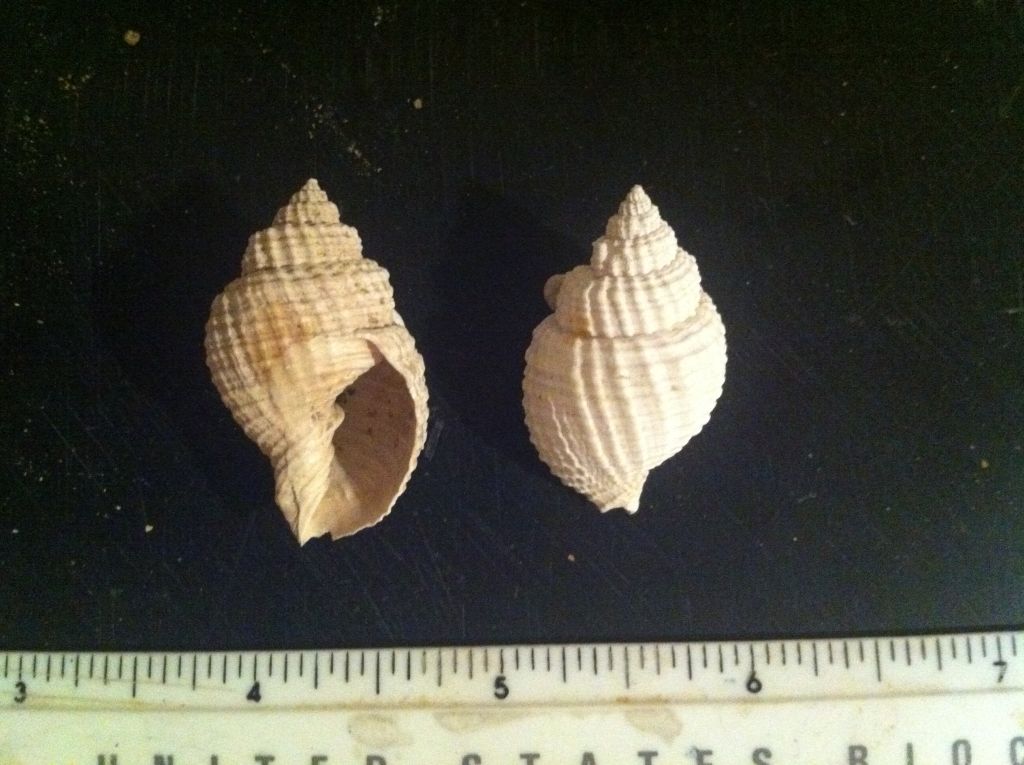 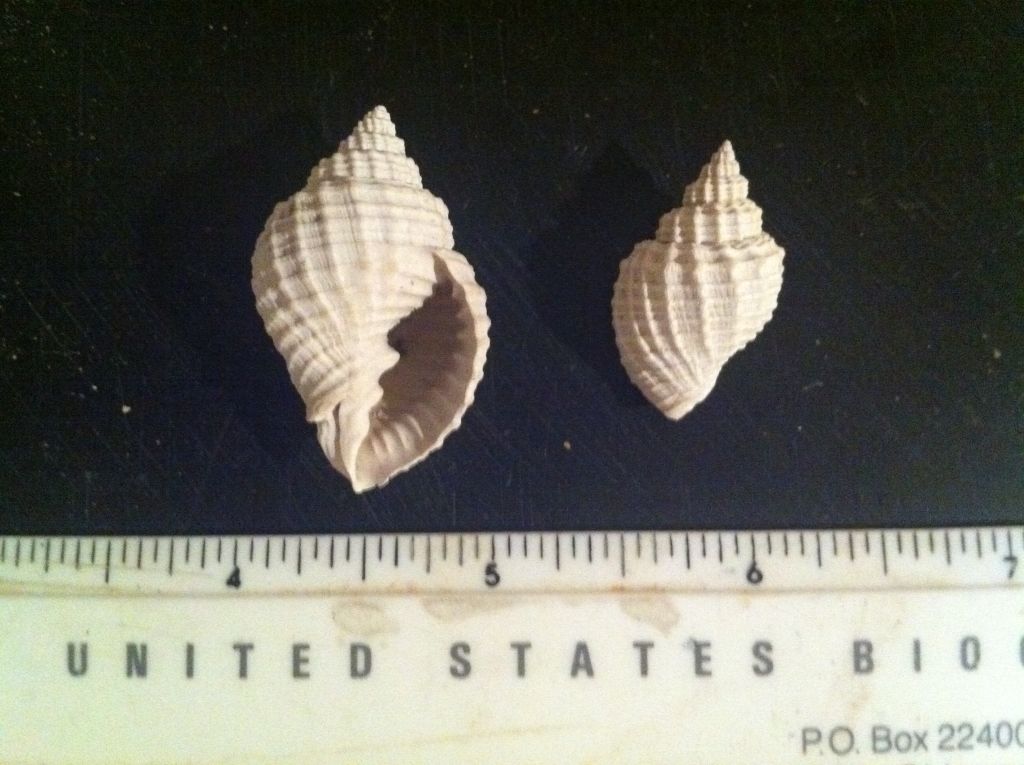 As with previous posts, I have listed mollusks that I have collected from both sites reported in the PDFs below.