This poll is closed to new votes

We have all had those mornings when it seems that our timing is off just a little. This day started that way. Usually, I adjust by trying to focus more on what I'm doing than other things. Dan and I were teamed up for a return to one of our most productive jungle areas. The possibilities of what we might find crowded my thoughts. However, I think it was the forecast for storms that had me a little preoccupied.

There were times along the twisted road that I could see Dan's headlights disappear in my rear view mirror. Fortunately, he was in sight when I discerned a vehicle pulled off the road in the opposite lane. I slowed down to see what was out of the ordinary when I noticed a large tanker truck stopped about a quarter mile further down the road. That wasn't normal. I still felt like I was a cup of coffee behind...but that soon changed. Shortly after passing the tanker, I noted a trail of liquid in his lane of the road. Aha, now things started to make sense. It was tracking the liquid on the dark road that allowed me the seconds needed to avoid a large dead black cow in my lane! I tapped my brakes several times to signal Dan, and he made it safely around the heifer. Crisis avoided, and we were back on our way.

Totally focused in the present, I mentally reviewed the logistics ahead. Dawn was late in the overcast skies, but a large column of smoke was clearly visible several miles away. My thoughts were soon interrupted by distant flashing lights and more smoke. All kinds of scenarios played in my mind: someone's house on fire; burning trash; or a car crash.... When we pulled to a stop behind the fire trucks, the roadside brush fire was intense. They closed the road...add 10 miles to the morning. That's how the day started.

It was good to finally get in the water. We figured our weather window was short, so we rapidly assessed each site we encountered. Small fragments of bone and the occasional flint spall teased us in our journey. Finally, a high terrace bank revealed more flint debitage to Dan. It was misting when he called out, "hey, I think I found a Clear Fork tool!" Indeed, it was.

Further on, a small movement caught my attention. "Cottonmouth!" Close to three feet long and a couple of inches thick, it was a reptile large enough to have no regard for our presence. Its head was raised alertly as it stopped along the bank. It was a handsome snake. We cautiously snapped a few photos before continuing our quest. 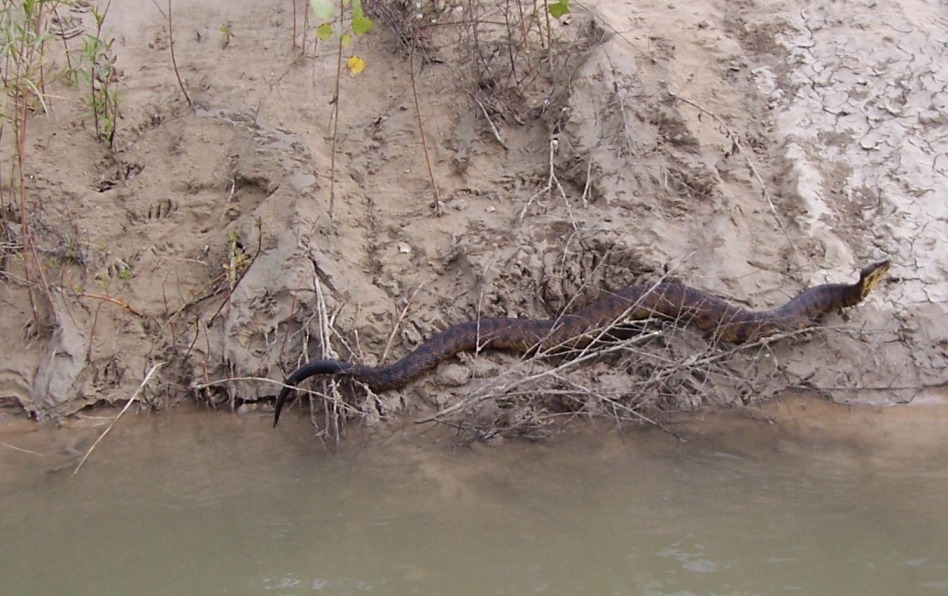 The skies darkened more with the first drops of rain. Dan donned his rain jacket. I had layered clothing and decided to see if the shower would last. As it slowed to a drizzle, I smiled at my decision...then, it really started to rain. Dan laughed while I fumbled with my poncho. "Did you decide to trap those damp clothes under plastic?" he chided. I smiled sarcastically. It was pouring. The rain cycled from light to heavy all the way back to our vehicles. We still had half a day left. It was time for plan B.

I called my wife, who was graciously monitoring the weather radar, and asked how things were looking. She said we didn't have any major storms headed for "plan B", so we put it into action. When we descended into the canopied stream, I reminded Dan this was where I had accidentally smacked him upside his head with a paddle handle. He returned a sarcastic smile. However, the sarcasm faded in the damp gloom as he occasionally picked up a few cool, old bottles. Then, in the shallows, I spotted a treasure... 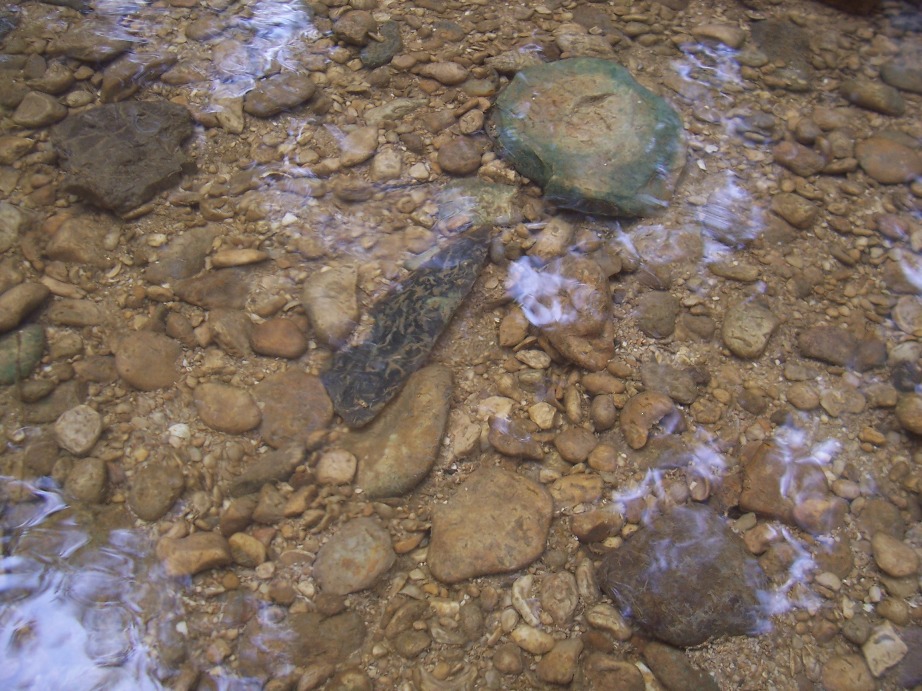 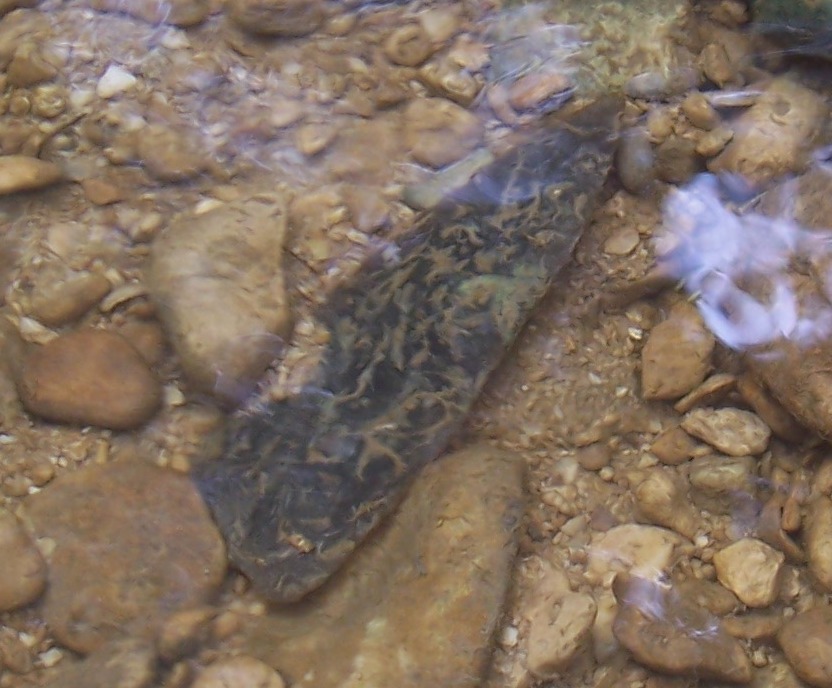 …it was a beautiful Archaic blade! As I pulled the camera from my pack, Dan cried, "Mosasaur vert!" Less than 8 feet away, there it was...the vertebra of a 70 million year old marine reptile. It was an exciting double find! Both discoveries rewarded our efforts. The day had shifted from a "step behind" to being in sync with our surroundings. 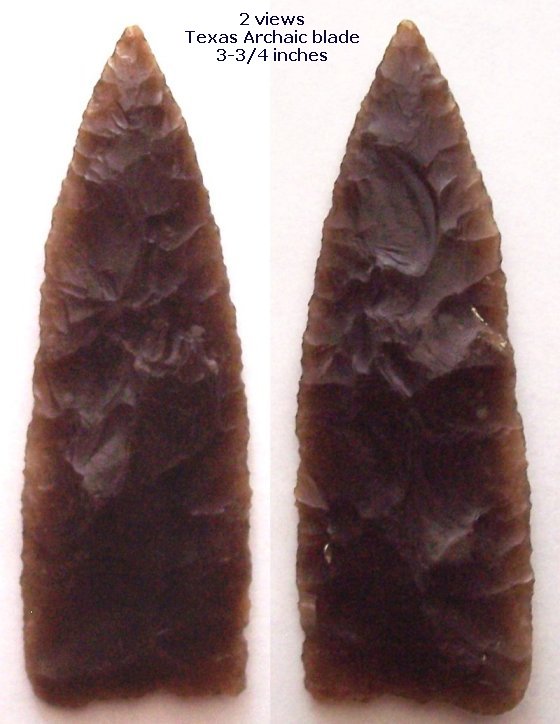 Downstream, while crossing one of several log jams, Dan noticed a raccoon disturbed by our efforts. Seconds after his observation, I watched a deer mouse scamper from beneath his feet. The tannin stained water continued to hold promise as we worked our way through the stream-bed. Soon Dan called out again, "I got a vert! It’s a good one!" The fossil fish vertebra was perfectly framed in the gravel. Our initial identifications settled on Xiphactinus, a large tarpon-like fish of the Late Cretaceous, due to the strut like features on the side of the vertebra. If true, it was his best one to date. 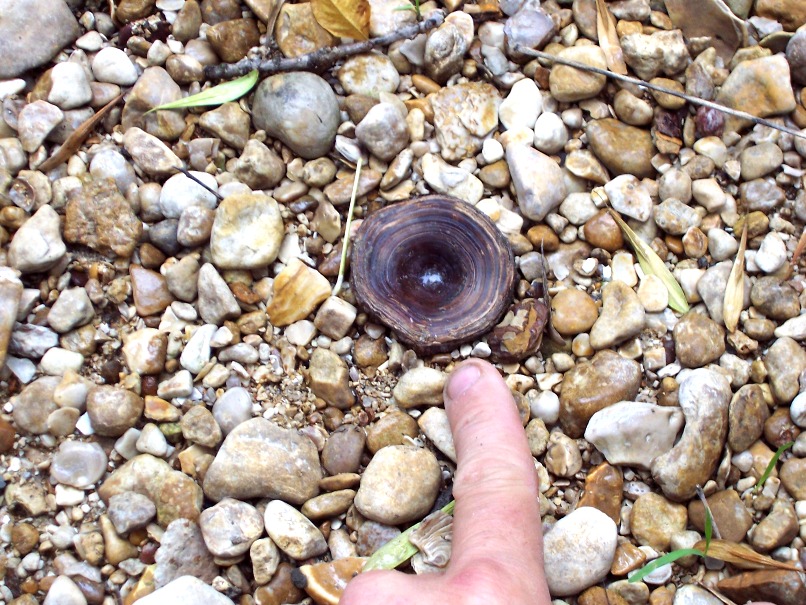 We didn't really notice the light rain. Tantalizing clues and the aura of recent finds kept us focused. Our eyes swept like radars over the terrain before us. "What's that next to your foot?" I asked.

"Where?" Glare blocked Dan's vision. Out of the water came a puzzling small bone. It was suggestive of a hoof or claw core. The latter would be very significant for the location. We were excited by the possibilities as I bagged the find for later research. 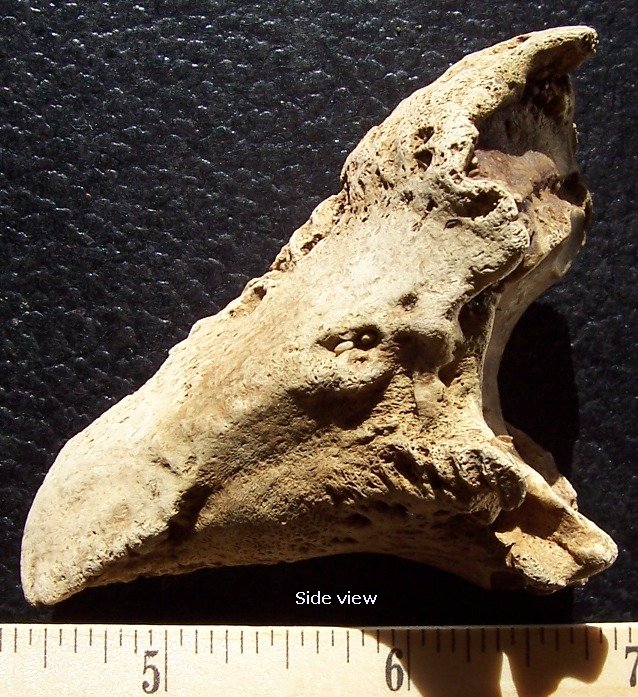 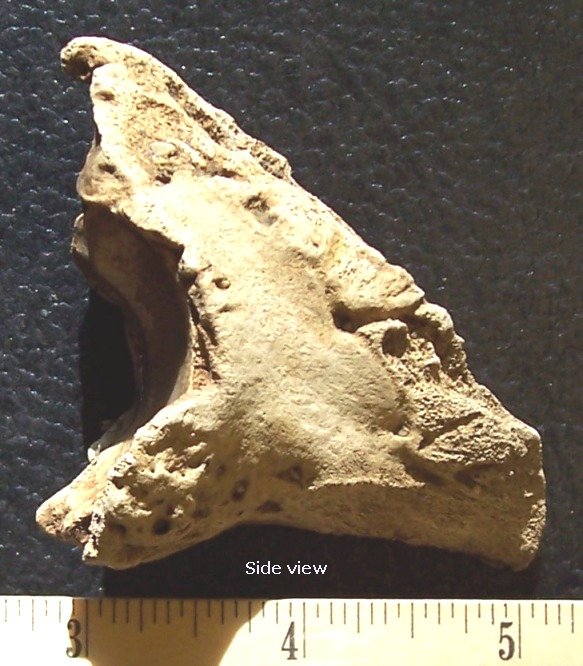 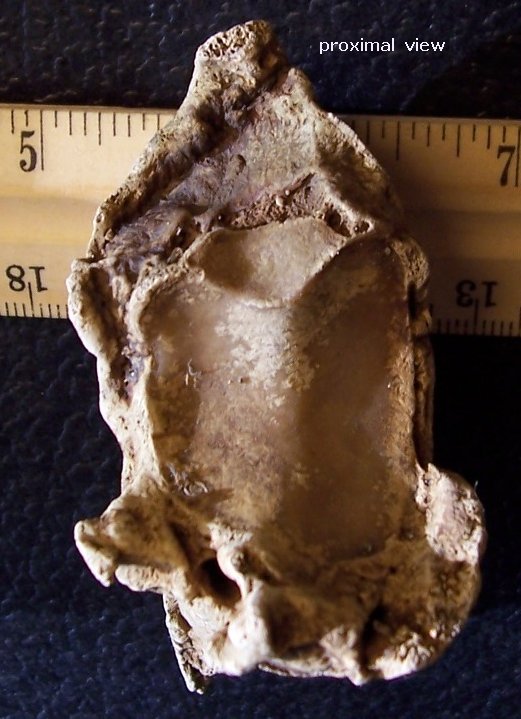 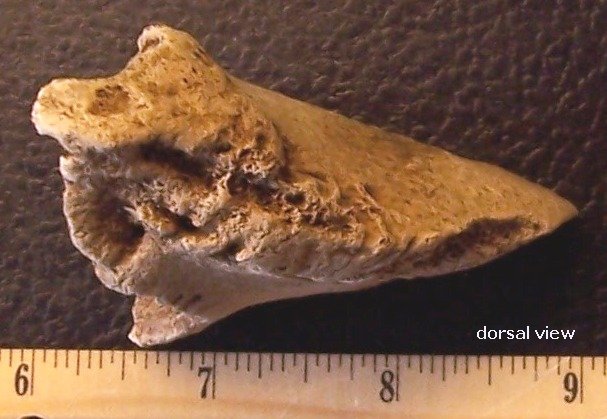 With a damp end to the day, Dan and I shook hands on another successful adventure. Night fell; an hour or so later, I was doing a little research on the mystery "core" when my phone rang. It was Dan.

"Hey man, you're not going to believe this, but on the way home...." Fortunately he was safe, and it did not involve a burning road or a dead cow...but that's his story to tell.