Diatoms are monocellular organisms which contain chlorophyll, and manufacture their own food in the same manner as plants, through the process of photosynthesis.  They are one of the major producers of the Earth's oxygen.  Their long geological history makes them very useful in the correlation of sedimentary rocks, and they are of equal value in reconstructing paleoenvironments.  They are remarkably common everywhere there is any water at all!  I have studied fossil marine diatoms for many years, as they are my primary interest in the microfossil world.  Many of them are quite beautiful, and they are a favorite subject with many persons who enjoy photomicrography.  My primary interest is in diatom taxonomy and evolution, not photography, so I'm afraid my images don't really do them justice.  Centric diatoms exhibit radial symmetry, from circular to triangular, and all points between.  Oval shapes are not uncommon. 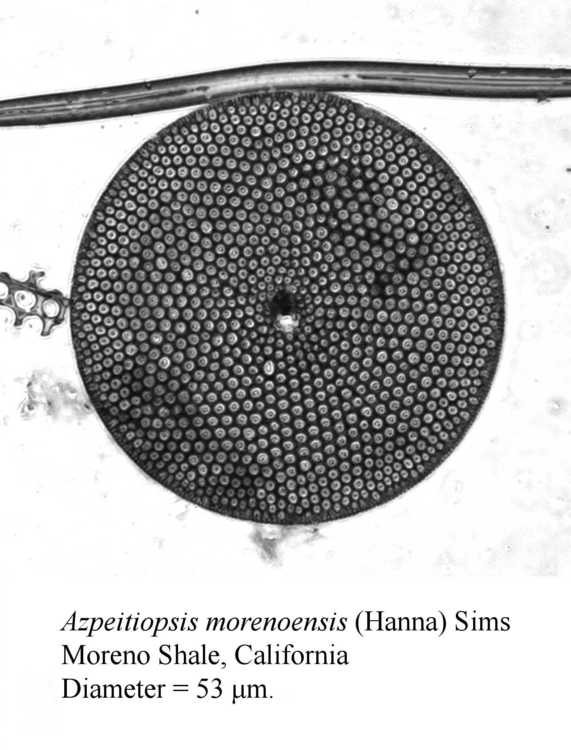 The oldest specimens of essentially modern diatom types are from the Cretaceous, and one of the very best localities is the Moreno Shale, which crops out in the Panoche Hills of California.  Many diatomists have worked on this flora, and it is fairly well understood.  Here we see two of the common taxa from this source.  (The bar across the top of the Azpeitiopsis is a sponge spicule, not part of the diatom!)  Diatom frustules are composed of secreted silica -- hence they are brittle, but can be virtually indestructible by chemical or diagenetic change in the right sort of environment.  (One exception is a highly alkaline environment, which corrodes and ultimately dissolves biogenetic silica.)  Other siliceous microfossils include some types of sponge spicules, silicoflagellates (another blog entry coming up perhaps), radiolarians, and ebrideans.  At least one family of the foraminifera uses siliceous cement to form their tests.

Diatom floras changed radically across the KT boundary, but they are still abundant in the Paleocene.  Arguably the world's most famous locality for fossil diatoms is the region around Oamaru, New Zealand, and all collectors have many specimens from there.  The age is Late Eocene - Early Oligocene.  Somewhat earlier are the many great localities in Russia.  Here is a Paleocene specimen from Simbirsk, Ulyanovskaya, Russia.  Note that it deviates from pure centric form in that it is slightly ovoid. 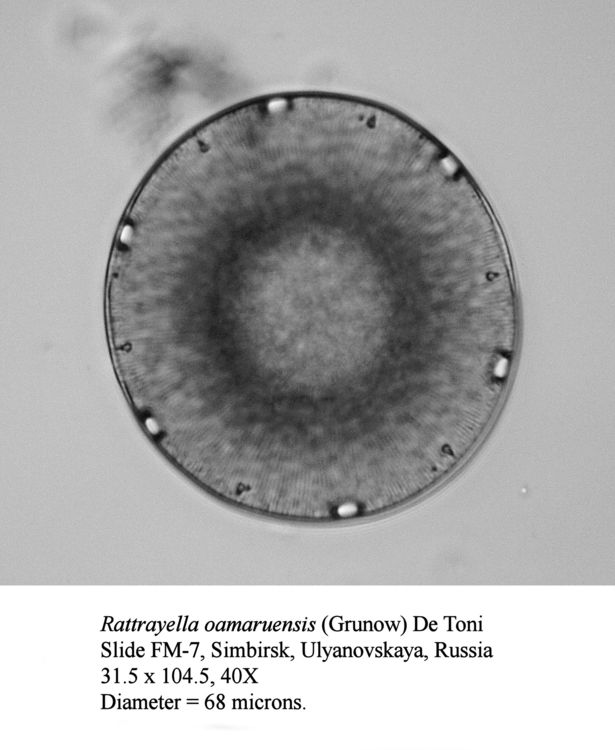 My own specialty is the diatoms of the Miocene.  The United States is blessed with superb Miocene localities on both coasts, many well-known to members of this forum, because most of them can also produce superb shark teeth.  The earliest known Miocene flora in the US comes from sites in Maryland: near Dunkirk, Nottingham, and other lesser known localities along the Patuxent River.  All of these sites began to be explored in the mid-19th Century, because the diatoms are so perfectly preserved, to say nothing of abundant!  These sites are in the lowest part of the Calvert Formation; indeed, there is an unconformity above them that lasted for a considerable period of time, and the diatom flora exhibits considerable changes across it.  This part of the Miocene section belongs to the Burdigalian Stage, and age-equivalent diatoms are found also in bore holes and artesian wells at Atlantic City, New Jersey.  An index fossil for the East Coast Burdigalian is the following taxon: 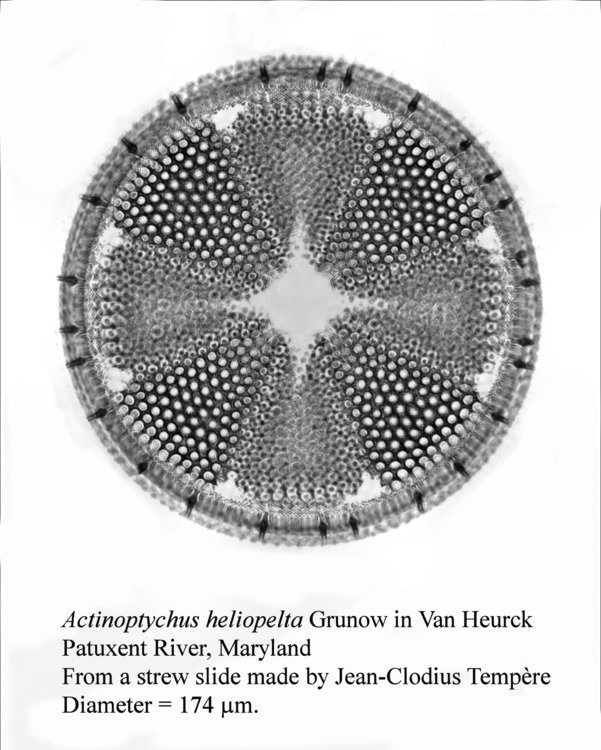 This species of Actinoptychus evolved relatively quickly, and became extinct at the end of the Burdigalian.  It is remarkably beautiful under the microscope, especially in color images, as fine structures in the silica serve as diffraction gratings.  I regret that I have no color image in my photo library: I need to make a few!  The Calvert Cliffs are rich in fossil diatoms, also, from the later, Middle Miocene. 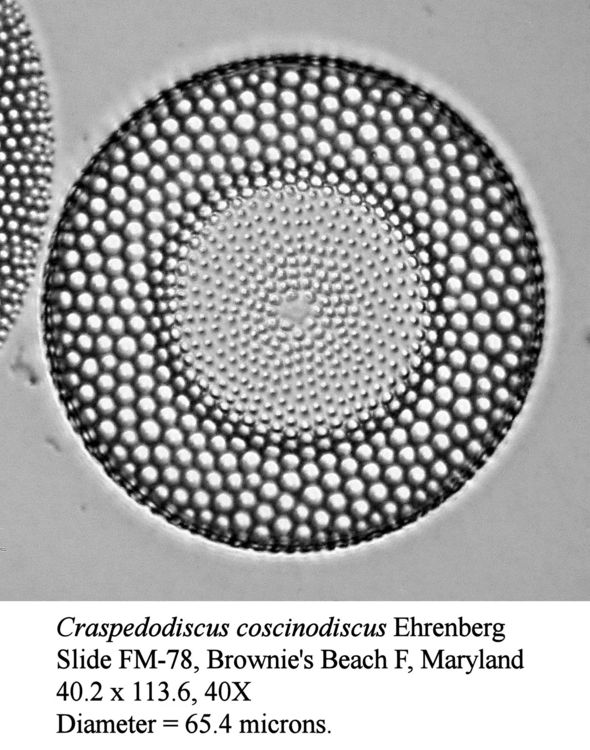 The above is but one example of the many marvelous specimens that can be found in the Calvert.  If you're walking the beach for shark teeth, and have access to a microscope such as that used in microbiology or pathology labs, or even the type used in high school biology labs, grab a sample of the sediment.  Soak it in water until it disaggregates into mud, let it settle until the water is just a bit cloudy, and put a drop on a microscope slide with a coverslip.  A magnification of 100X should reveal diatom frustules (or fragments thereof) among the remaining, unsettled particles of silt.  Diatomists all have their own protocols to get such specimens almost perfectly clean, and permanent slides made with a mountant of high refractive index can be utterly gorgeous.

I am currently working most intensely on samples from the somewhat later Choptank Formation, that outcrops at Richmond, Virginia.  This is another locality that produces excellent specimens: This is one of the most enduring taxa in the geological record, appearing from the early Paleogene right up until the present day, and it can be very abundant. 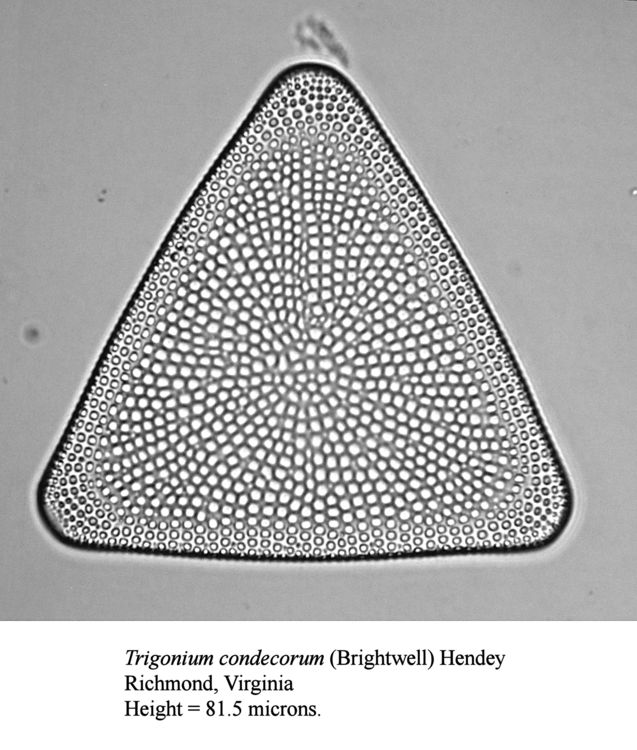 A common triangular form.  There are many genera of triangular centric diatoms.  And other radial shapes are possible, too: 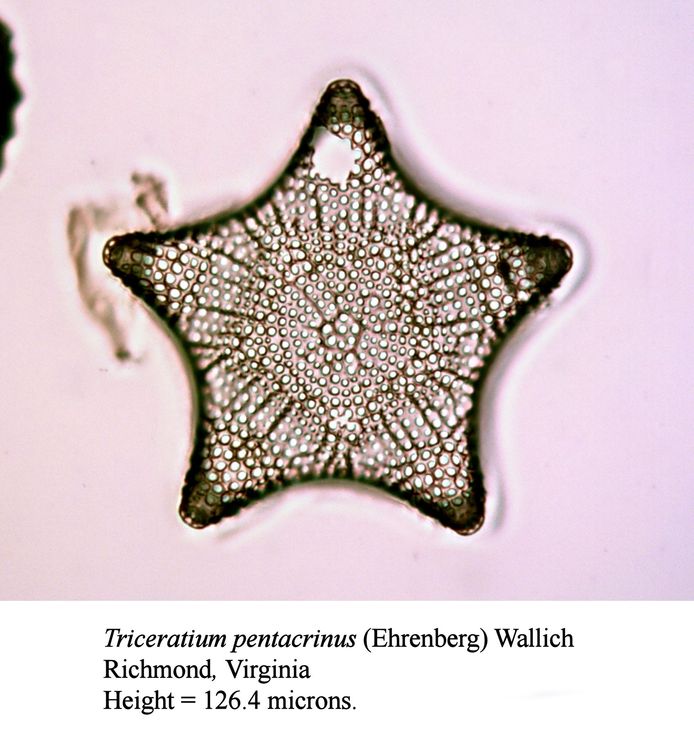 So far as I am aware, this unique specimen is the earliest known example of this taxon, which is still found today in tropical waters.  The breakage in the top "arm" is unfortunate, but what can I say: the specimen is, thus far, unique.  One might expect modern contamination of the sample, were it not for the fact that the Richmond localities occur far from the contemporary ocean coast -- they are not "watered" by modern waves!