I have recently been studying a sample of washed residues from the Pecan Gap Chalk Formation of the Cretaceous Gulfian Series, from an outcrop in the vicinity of Austin, Texas.  Most of the Gulfian formations are richly fossiliferous, and the Pecan Gap is no exception.  It has abundant, well-preserved microfossils, particularly forams and ostracodes.  In this blog entry I would like to show some forams of the family Nodosariidae, which I find of particular interest.  All belong to the genus Frondicularia, which has compressed, biserial tests. 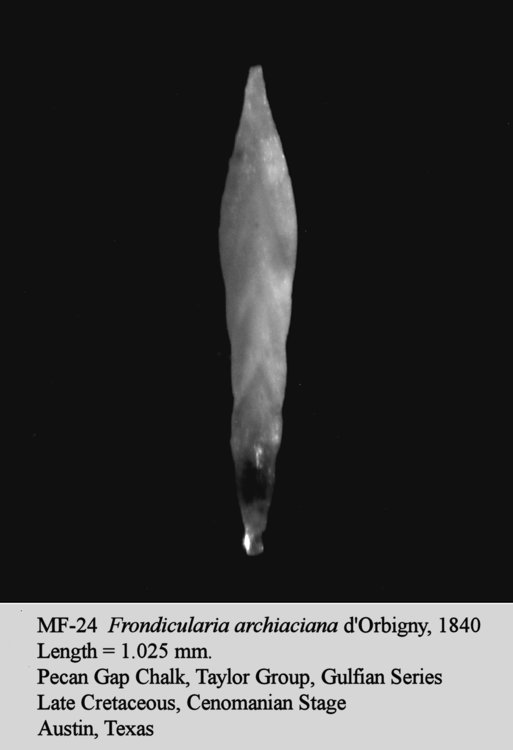 Frondicularia archiaciana d'Orbigny, 1840 is one of the maddeningly similar "narrow" forms within the genus, whose identification often requires close attention to the contours of the test outline.  The biserial growth form of the test appears in most  members of the genus as inverted chevrons when the image is oriented with the aperture uppermost.  This structure is more-or-less apparent depending on the relative transparency of the individual test, and it shows quite well in this image.  What one is seeing are the suture lines between the chambers.  The aperture in members of the Nodosariidae is radiate; this type of aperture does not stand up very well to post-depositional forces, and is very frequently broken away -- true of all four specimens in this entry. 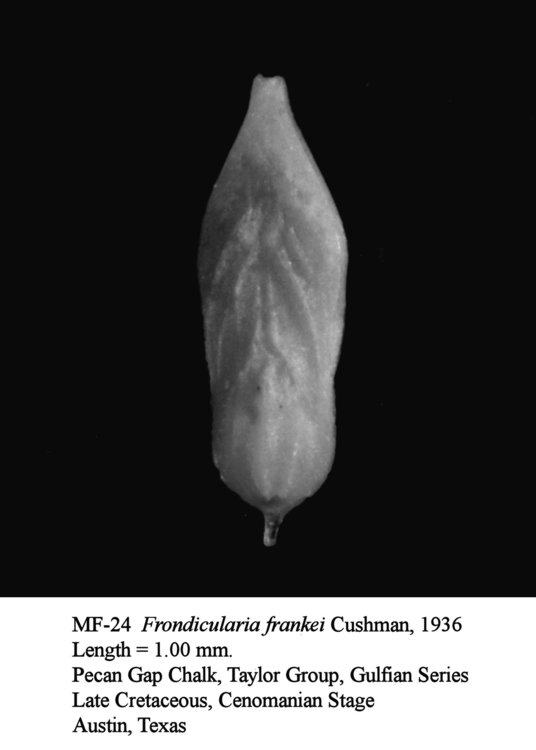 Frondicularia frankei Cushman, 1936 is one of a group of taxa within the genus in which the base of the test is not compressed.  In profile, the base appears to be bulbous, with rather wide "ripples" oriented lengthwise.  The upper 3/4 of the test is compressed, and appears quite flat in profile.  The basal spine is one of the distinguishing characters of this species, although many others show such a spine also. 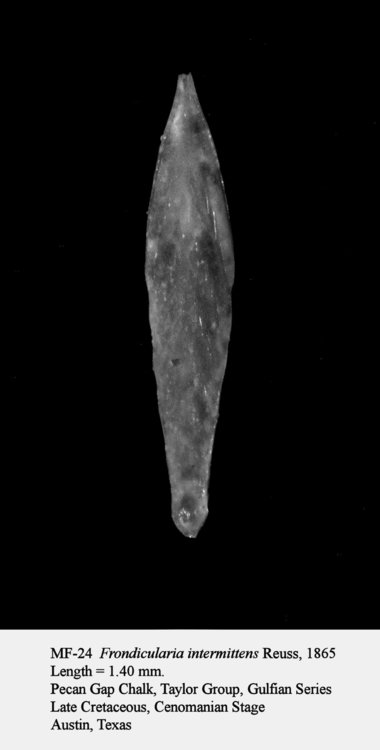 Frondicularia intermittens Reuss, 1865 is another taxon of the "narrow" group, in which the chevrons produced by the biserial structure are less apparent.  A few bright, length-wise streaks show that the sutures separating the chambers are depressed. 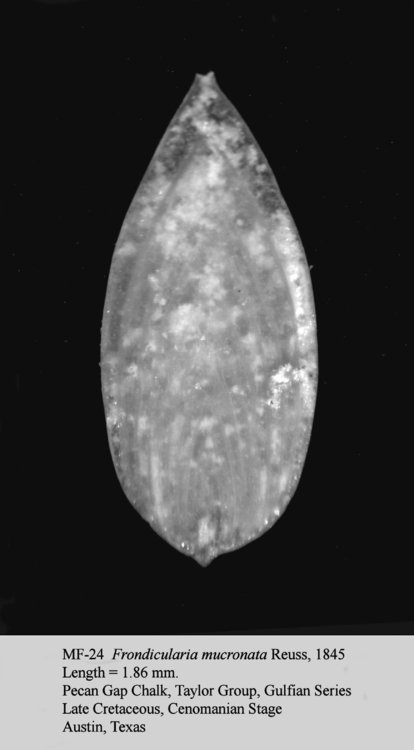 The largest of the nodosariids that I have found thus far is Frondicularia mucronata Reuss, 1845.  The larger, more ovoid appearance of this taxon is due in part to the greater length of the individual chambers, which also gives the "inverted chevron effect" a somewhat different character.  The specific epithet is from the small basal tooth on the initial chamber (proloculus) of the test.

Hopefully, readers have enjoyed looking at these little fossils.  If so, stay tuned -- I'll be writing more about microfossils from the Texas Gulfian Series, and will also upload an entry on Pleistocene Ostracoda from the San Pedro Formation of California in the near future.