Planktonic Foraminifera are particularly important in biostratigraphic studies and correlation, as they are ubiquitous in marine deposits, and evolve rapidly.  They first appeared in Middle Jurassic time, and thus have a long geological history.  There are many phylogenetic and correlational studies available, and their rapid evolution makes them exceptionally useful as temporal markers, or guide fossils.

I am currently looking at planktonic Foraminifera from a deep-water sample that was collected from the Dry Tortugas Islands, off of the coast of southern Florida.  The sample was dredged from a depth of 215 meters, due south of the islands.  This is an interesting area, as it represents the eastern extremity of the Gulf of Mexico, as well as the northern edge of the Caribbean Sea.  The sample is a very rich one, with numerous species of benthic Foraminifera, as well as a few ostracodes.  There is a good selection of planktonic forams -- I have thus far identified ten species, and would like to discuss one of these, a member of the Family Pulleniatinidae.

Pulleniatina obliquiloculata (Parker & Jones, 1862) is a rather unusual looking taxon, starting with a trochospiral growth pattern, but switching to a streptospiral pattern for its final chambers.  It is globulose, and quite shiny, making it easy to recognize.  It took me some time to locate a specimen for imaging, as most specimens have their aperture clogged with matrix. 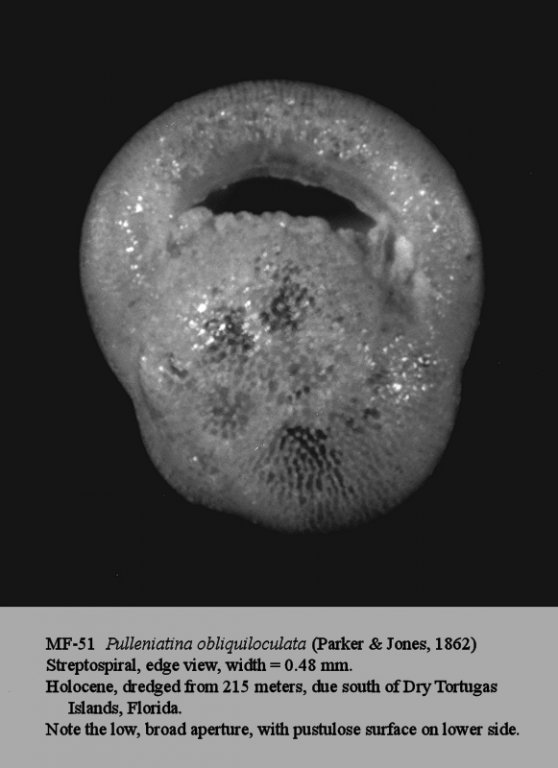 The aperture is low, but very broad, and the apertural surface of the chamber below it is strongly pustulose.  If this image were rotated toward the viewer a bit it would be clear that a thin area just above the lip of the aperture (seen here as an imperforate band) also bears pustules, although they are not as strong as those beneath the aperture.  For those interested in taxonomy, this species is the generotype of Pulleniatina.

I am submitting this short blog entry to see if the recent problems with uploading to the forum have been fixed.  If so, I'll be submitting other entries on this sample.