As the title implies - I had a very busy and exciting spring break. Big news first - I confirmed plans this June  to intern with a small paleo company, "Fossil excavators", in North Dakota for two weeks digging up a sub-adult T. rex, which was found right at the end of the season last year.

We'll be exploring more than just that though, as the hell creek dig sites accessible to them are rife with life. A unique Triceratops horridus specimen,  nicknamed "Alice", who's an adult missing all indication of its right horn (perhaps hox gene mutation, perhaps an injury as a hatchling, it's not known yet, as preparation is still underway) was found close by at the same site, as well as adult rex material.

In our zoom interview, they also asked about the Mosasaur Christian and I found in September, and I jumped at the chance to get to talk about it. For those still curious, progress has been sloooooow but consistent. I went back to the site to poke around more at the pit just out of a "what if" notion, and found much more of the skull and skeleton. There's still skeletal material in there, but the full on dig has been getting postponed for a while. We do finally have a date in mind though!

Anyway, here's a link about Alice below - I'm obviously super excited, and also specifically excited to work with Harry. I'll probably try to plant myself as firmly as possible into assisting with their unrelated (to the interns) projects as I can.

Now on to my week of fossil hunts:

Early on, I decided to explore a new creek with Ozan strata. I had high hopes but got mostly skunked - can't win them all. I'm mostly including it here because the grandiosity of the exposure impressed me, and perhaps some invertebrate lovers will have an appreciation for the oysters I saw there: 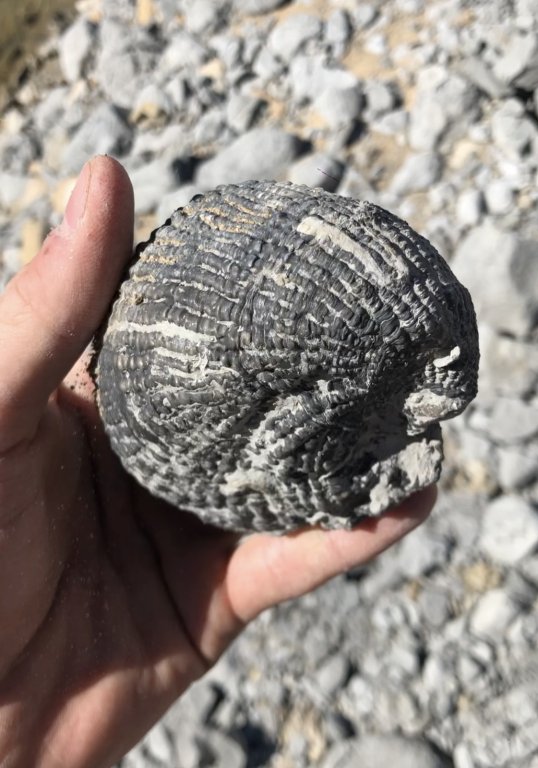 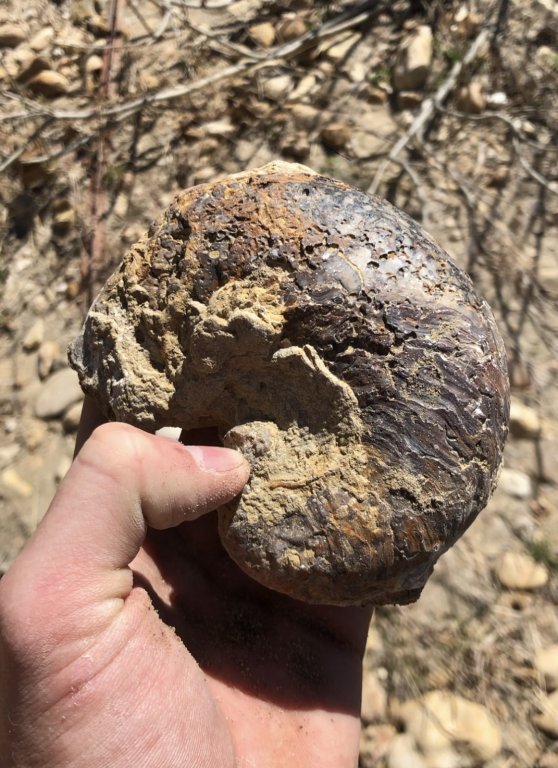 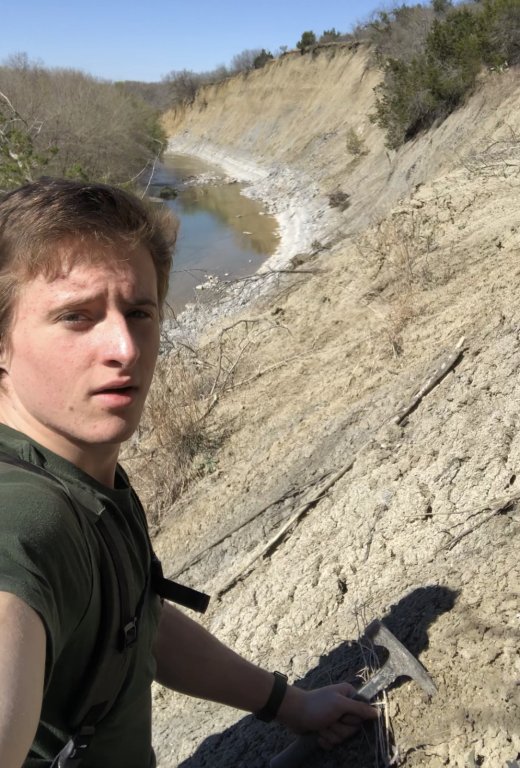 In between balancing friends and rock climbing, I found another time to hunt a day or two later - this time a much more familiar spot that has unfortunately been receiving increasing attention. The low water and ample foot prints told me first how picked over it would be, but despite that, I made some uncommon finds I was happy with:

First, this point, the smallest I've ever found, and no doubt an actual bow and arrow point, rather than an Atlatl point like all others I find. I don't know the type yet, but it's an impressive little piece that was sitting right beside somebody's foot print: 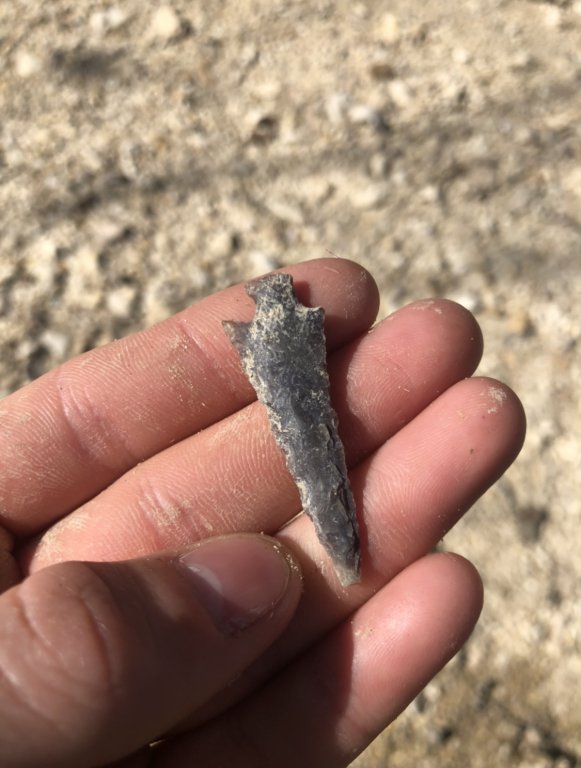 Pleased with myself, I then found another piece of Columbian mammoth tooth enamel - this is only the third I've ever seen, and the three I have found have all been within the same 100 meter stretch of creek - I'm dying to find where they're coming from. 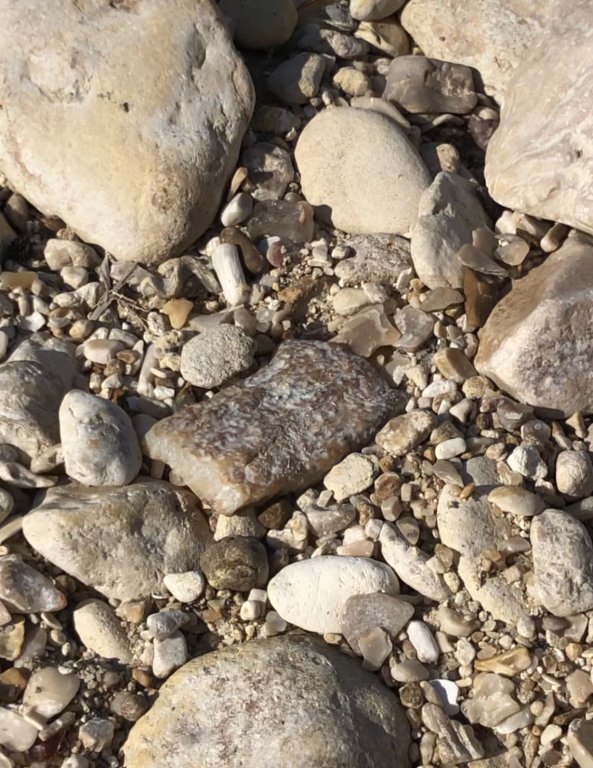 The next day, I decided to solve just that problem. The plan was to hit the hard-to-explore upstream area where I knew there ought to be a small Pleistocene exposure. Those who have seen my posts on the forum a lot probably know well by now that if I have a sworn nemesis, it's the Pleistocene. I have so much trouble finding Pleistocene exposures that I take it personally at this point

The team was myself, my step-brother christian, who always proves to be good luck on the expeditions we do together, and my friend Siri, who on her very first outing, discovered that bi-face that some may remember from an earlier report. I'd call that good luck as well.

I had only explored the stretch of creek we were on once before, and that was in a mad dash, as the day was closing on me quickly when I initially scouted it.

Through the bramble thickets and thigh deep creek walking, we started making our first few finds:

Christian with an interesting tooth from the shark Heterodontus canaliculatus 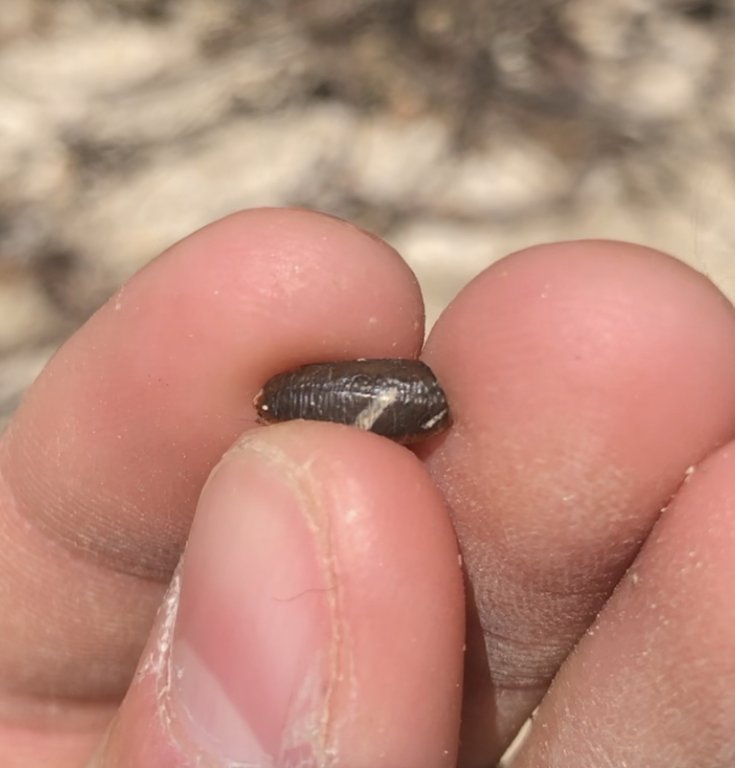 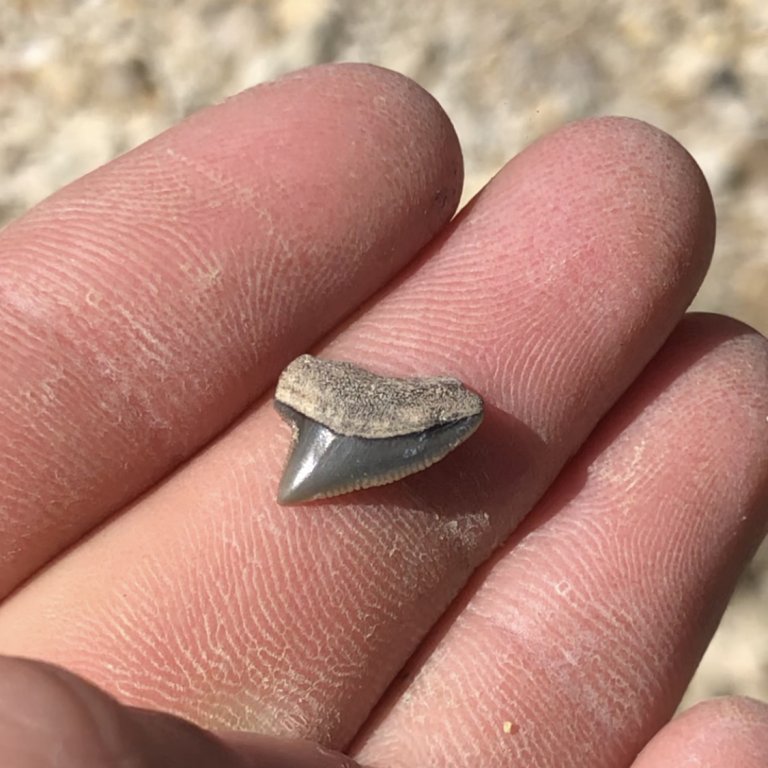 Siri walking an exposure below: 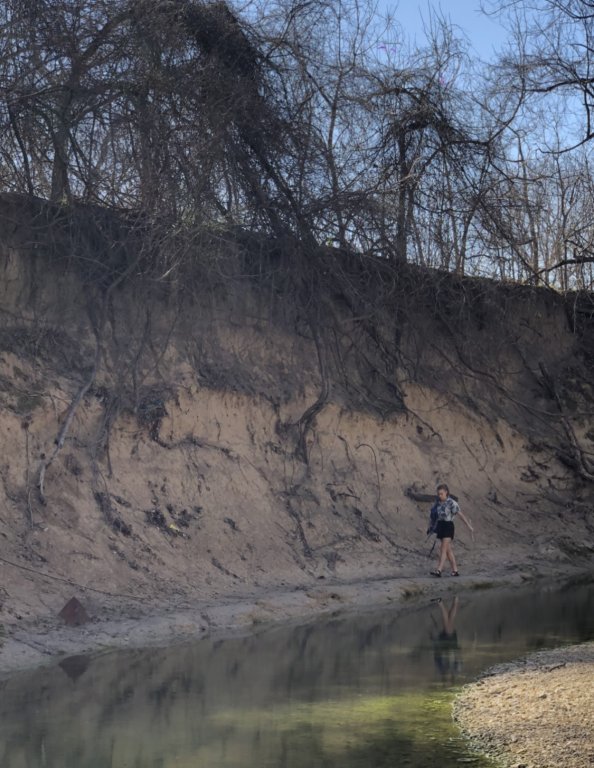 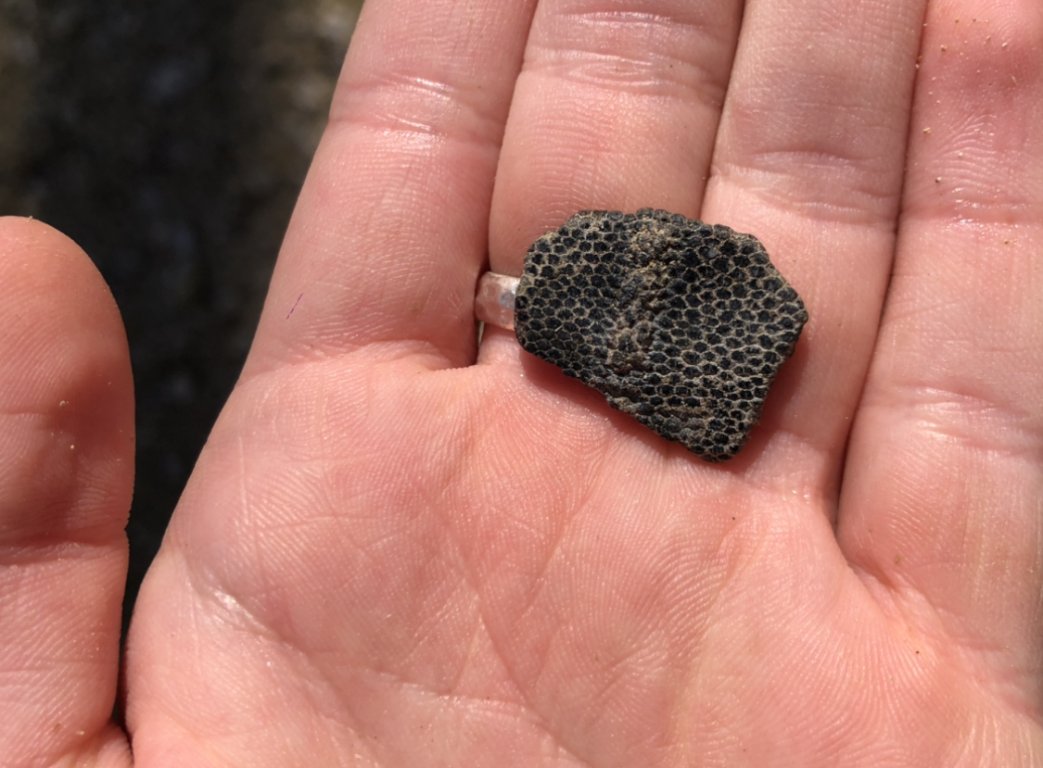 Then, things started getting exciting when we stumbled upon a wealth of Bison material:

Below, three ribs weathering out of the bank - the ribs themselves weren't diagnostic, but the positive ID on the Bison tooth shown next only a few feet away means that these ribs are probably associated with it. 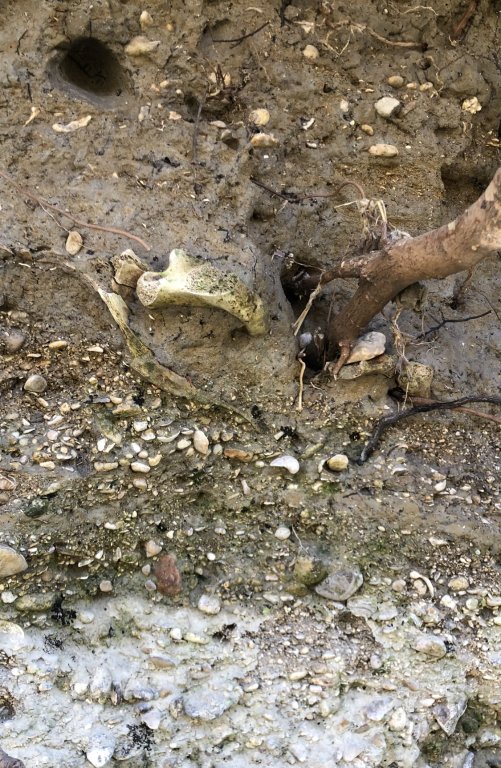 Siri spotted those above, and Christian close by spotted a large leg bone in the same layer. As we round the corner, I noticed a deeply weathered bone in a layer that was a few feet higher coming out of the bank - blowing on it, I saw teeth! It was a lower jaw.

Now, before you get your hopes up, this jaw did come from a higher layer, and I've decided after cleaning that I think it's most likely cow - the stylids on the teeth in the jaw don't look the stylids on my confirmed Bison teeth. Bummer - but I didn't know that yet! It took three days in total of short trips when I had  the time, to get it out in tact, and it made for a really euphoric experience while doing so, considering the beautiful area it was in. I will still upload a picture of the teeth later, just in case my cow ID could be wrong

Below, the initial revealing of the jaw, with christian working to extract a vertebra in the background: 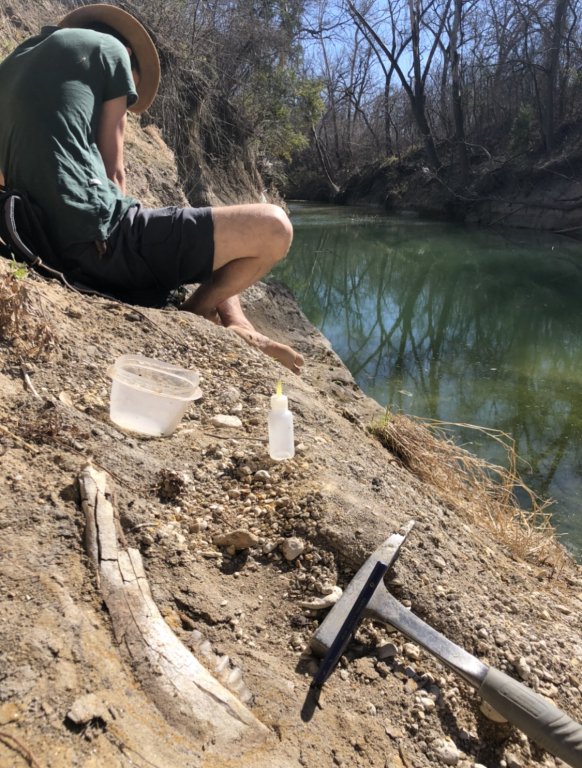 The jaw after I completely revealed it when I came back two days later: 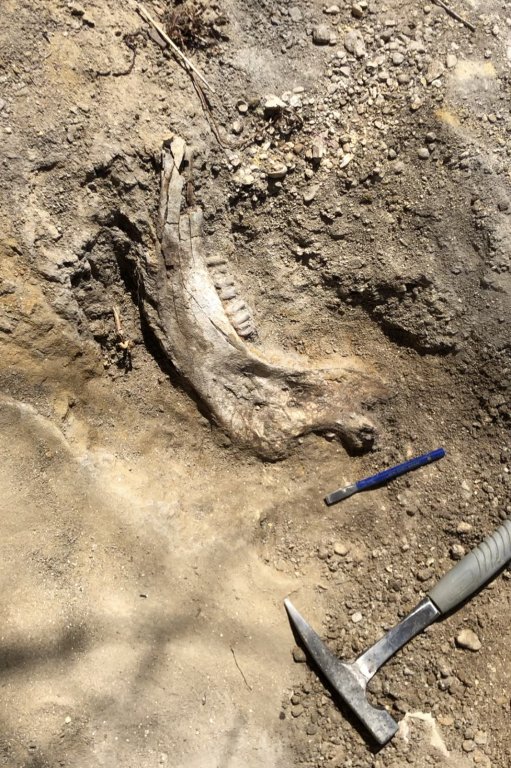 Fast forward to two days ago. I was exploring an Eagle Ford spot in a dingey little creek that produces magnificent fossils, like my largest tooth from anything to date, a Xiphactinus partial tooth. This time, instead of splitting open mudstone, I poked around in gravel a bit, and lo and behold, I quickly came across a stunner (to me) Cretoxyrhina mantelli. I am not good at finding large representatives of this species, even though the teeth from this animal have the potential to reach 2.7 inches in length. This is likely my largest C. mantelli tooth in terms of mass, and I love the colors. 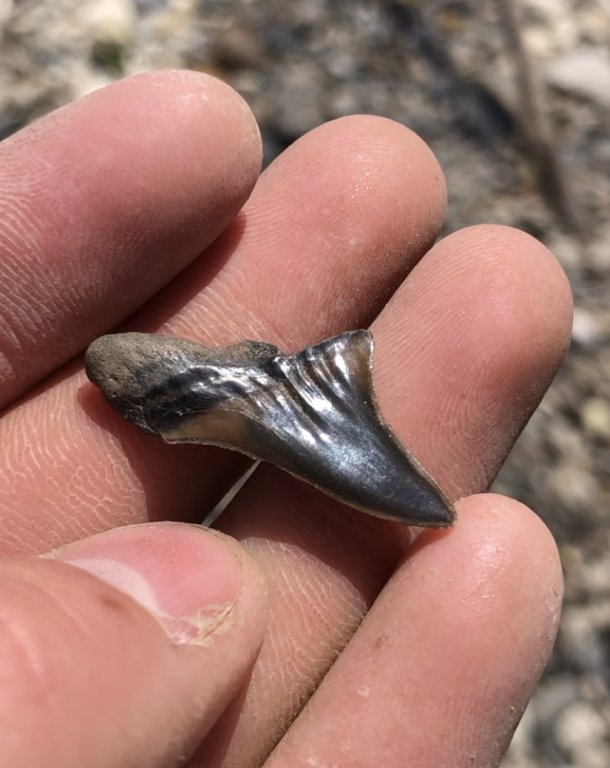 I also found what what has the potential to be a decently sized tooth in matrix, in the queue to be prepped out soon. 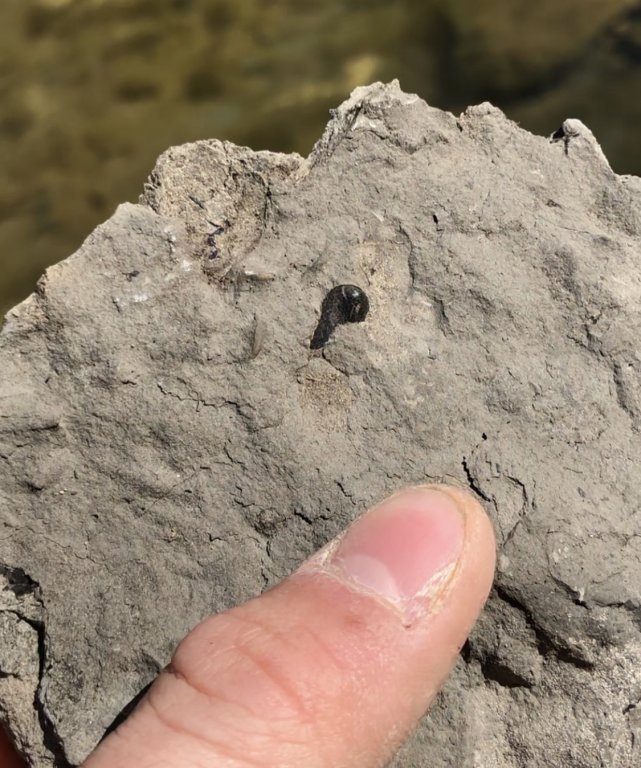 A follow up trip the day after was less successful, with a few of the now usual Ptychodus anonymous teeth showing themselves, and a chunk of Pleistocene tooth - crossing my fingers for horse, but in reality it's probably un ID'able. It's funny to call a shark tooth "usual" for me now, many of you may remember when seeing even a piece of a Ptychodus tooth in central texas would have made me lose my mind. 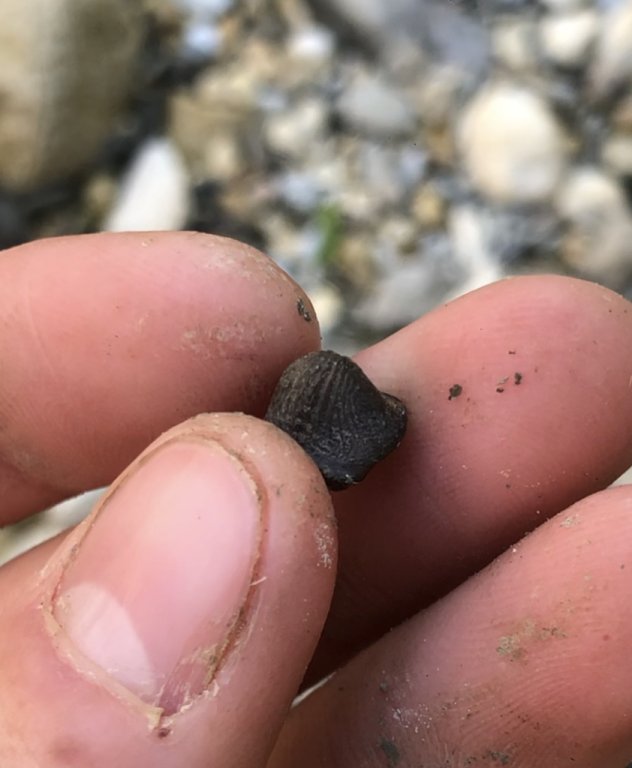 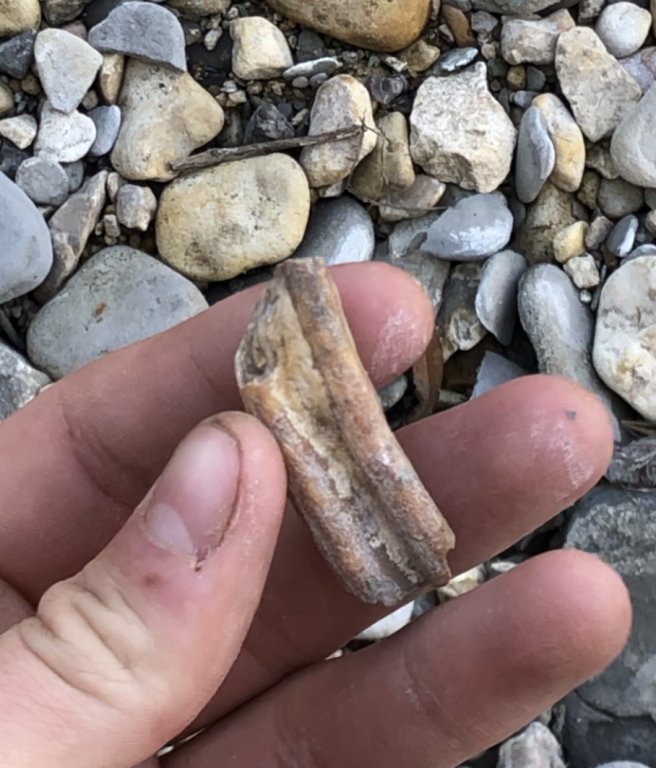 Today's classes were cancelled, as my professor had an important appointment, so I spent the day neglecting my other pressing responsibilities and drove around frivolously, exploring new wild areas. I was dodging a thunderstorm that kept finding me and soaking me, and at one point had to hop a curb to hide under a tree with my car to avoid the hail.

I decided to go and check out another Eagle Ford spot 15 minutes from my house right as the worst of the evening storm passed again, and as I pulled into the neighborhood that the spot bordered, I was met with views of torn out fences, ripped up shingles, and also much later with blown out windows, caved in garage doors, and in some concentrated areas, portions of roofs lifted. A tornado had barged through the neighborhood 40 minutes before I got there.

At first, on the way in, I only saw the area of lighter damage, the worst being uprooted oak trees, as is usual with our normal strong spring storms. I saw neighbors walking about investigating it, but I had no idea it was a proper tornado that came through. Seeming I thought it was just storm damage at this point, I anyway walked down to my spot and hunted to no success - I did however see another deep black/brown cloud coming in, and noticed what I thought were tornado sirens for a few seconds.

As I drove out, I took a different route, and saw the heavier damage, (the torn up roof portions and caved in garages). I pulled over to help the neighbors clean some of the worse hit areas before it got dark, and then tried driving back to see if my house is ok. Turns out the neighborhood I helped in didn't even get it the worst, another neighborhood just south of them and 8 or so minutes from me got super badly hit, with fully uplifted roofs and everything. Roads were iffy and it took many detours, but I was able to confirm that my house and chickens were fine when I eventually got back. I've been home alone for a few days, so my parents had no idea that our town got hit. Christian was a little jealous he missed it

Here's some footage of the twister itself, for those curious. The debris is when it hit the shopping center where the bank is. The tornado picked up and dropped down several times, and the path it took in the video would've taken it to my neighborhood in less than a minute if it didn't pick up, as the road this angle looks on is only  a few minutes away. Definitely got lucky! It's amazing no one was seriously injured.

Anyway, there's a lot to unpack there, an exciting one week for sure! I also had tons of non- fossil related fun, rock climbing hard and staying up until the sun came out with friends back from college. What a week it was.