This poll is closed to new votes

I have always enjoyed looking at ostracodes of the family Trachyleberididae, for their varied and complex structures, and interesting ornamentation. The family seemingly first appeared in the Middle Jurassic, became abundant during the Cretaceous, and remains abundant in the seas of today.

About a month ago, in an exchange of microfossil material with an Italian friend, I received a sample of material from the Coralline Crag of southeastern England, a well-known and extensively studied Middle Pliocene (Zanclean) marine deposit of cross-bedded sands. The deposit averages about 12 meters in thickness, varies from weakly to more strongly consolidated, and is highly fossiliferous. The name comes from an abundance of bryozoans, which early scholars mistakenly thought were corals. Ostracodes and foraminifera are both abundant. Faunal studies have suggested that the sea was a bit warmer when this formation was laid down, perhaps more closely resembling the Mediterranean Sea, or the Atlantic Ocean off the northwest coast of Africa. Hence the Coralline Crag contains many species that do not much resemble those found in the marine littoral deposits of modern-day England.

I have recovered quite a few species of both forams and ostracodes from my sample, and am just beginning the identification process. The species I want to show off in this entry is the first I have identified, chosen to be investigated first because it is both common and showy. The taxon is correctly known as Cletocythereis jonesi Wood et al., although it was previously known by various other names through misidentification. It is a typical trachyleberidid, although with much coarser surface sculpture than most. The valves are subquadrate and rather thick, with an amphidont hinge. The surface is coarsely reticulate, with a strong sub-central tubercle, and dorsal and ventral ridges. The anterior margin is also reticulate, divided into elongate, transverse cells. The ventral ridge terminates posteriorly in a complex loop. The eye tubercle, just below the anterior dorsal margin, is large and shiny. 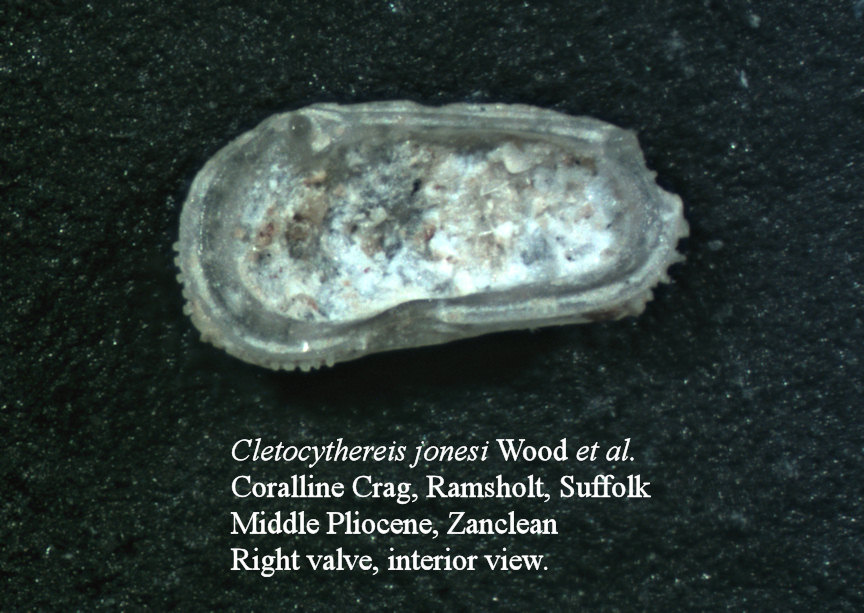 Here is an interior view of the same right valve, unfortunately obscured by residual matrix. The ventral margin exhibits a strong concavity; the posterior dorsal corner is not broken, contrary to appearances, and is a close match to images of the type specimens. 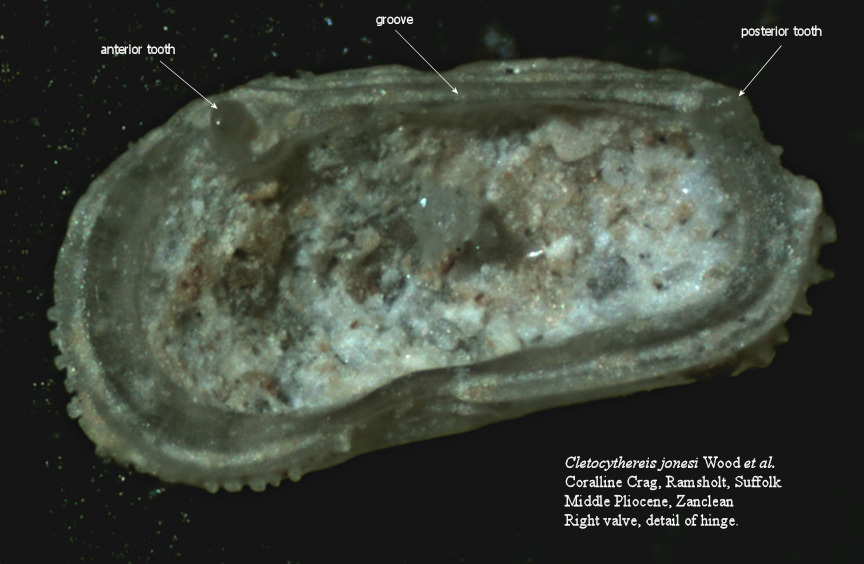 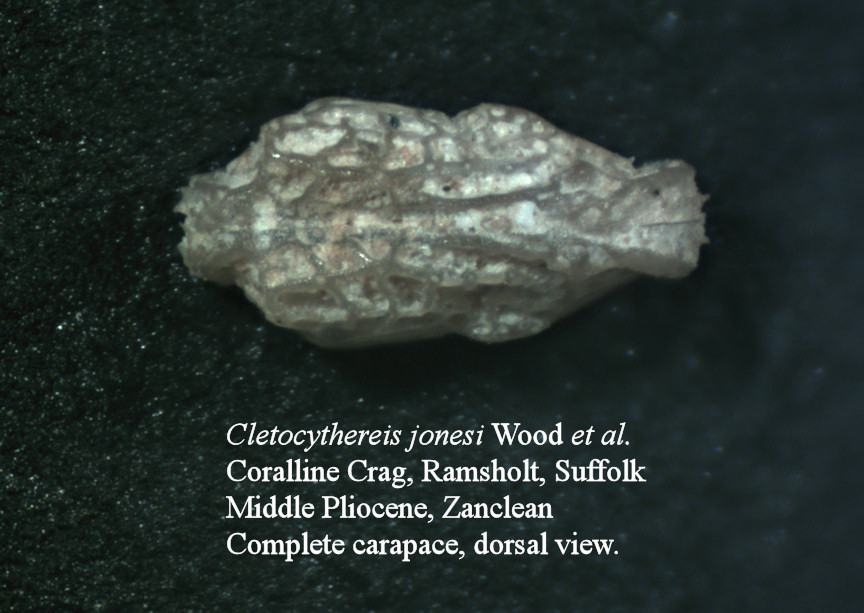 This dorsal view shows the thickened central part of the carapace, due to the dorsal and ventral ridges, and the relatively flat anterior and posterior margins.

Personally, I think this is a really handsome microfossil -- considering that its largest dimension is only about 1 millimeter in length!

In future entries in this blog I hope to illustrate a few other ostracodes and forams from this interesting formation, if I am able to make more identifications. Fortunately, I have access to a good research library!

Wilkinson, I. P., 1980, "Coralline Crag Ostracoda and their environmental and stratigraphical significance," Proceedings of the Geologists' Association 91:291-306.