About a month or so ago I received a sample of "microfossil dirt" from the Gene Autry Shale Member of the Golf Course Formation, which crops out in Johnston County, Oklahoma, in the Ardmore Basin. The Golf Course Formation is of Lower Pennsylvanian (Morrowan) age. The sample contains abundant foraminifera, although it is not rich in numbers of species. There are also some good ostracodes. Preservation is quite variable: a few specimens are essentially perfect, but most show varying degrees of crushing or recrystallization. 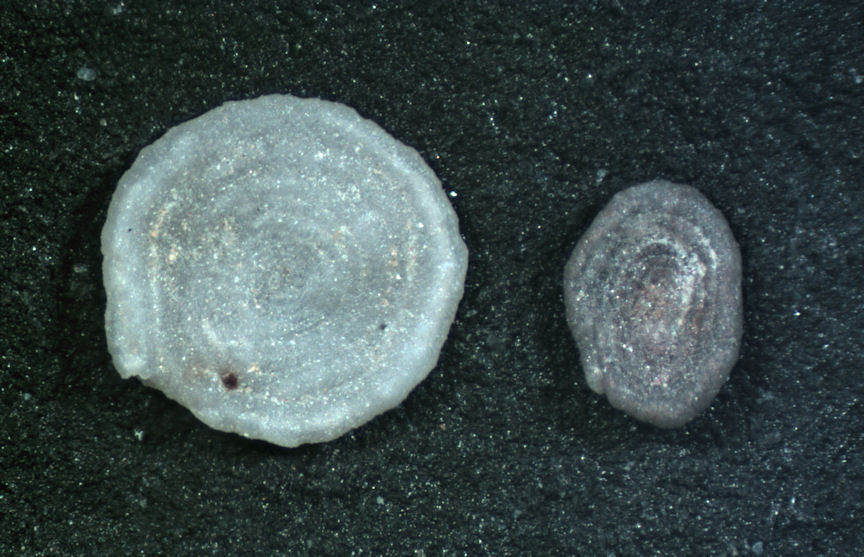 The commonest foram in the sample is Ammodiscus semiconstrictus Waters, 1927. Most specimens are almost perfectly circular, like the one on the left, while others show deformation to a more-or-less oval shape, like the one on the right. Size of these specimens shows much variation: the larger specimen in this image is 1.0 mm in greatest width, and a few are a bit larger. Some tiny specimens are only 0.2 mm in width. The test is finely arenaceous, and seems to be composed mainly of tiny bits of carbonate mud. This wall composition is typical of all but one of the foraminifera specimens I have found in this sample thus far. 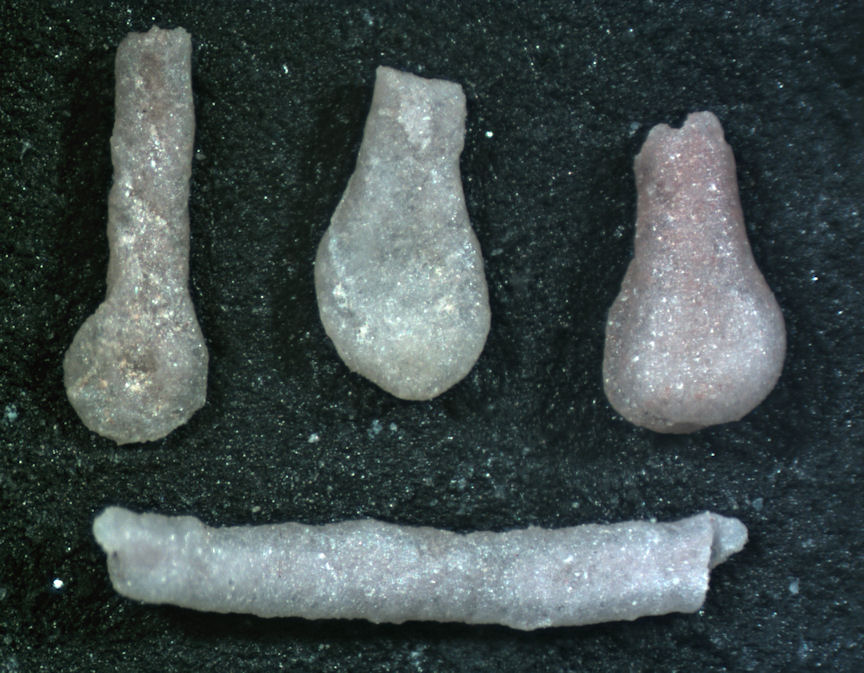 Another common species in the sample is Hyperammina bulbosa Cushman & Waters, 1927. These are never found intact. The test shows only two chambers, a sac-like proloculus followed by a long, straight tubular chamber. In this image we see three proloculi, with the straight tubular chamber broken off at some distance away. (The specimen on the left is 1.8 mm long.) Fragments of the tubular chambers are very abundant, more so than the proloculi. (Each individual has only one proloculus, but the tubular chamber can easily be broken into 5-10 pieces, making such fragments more abundant.) A fairly long fragment of this sort is shown at the bottom of the image. These tubes may be slightly irregular, and occasionally show fine, transverse growth lines. The tubular chambers do not contain septa, however. 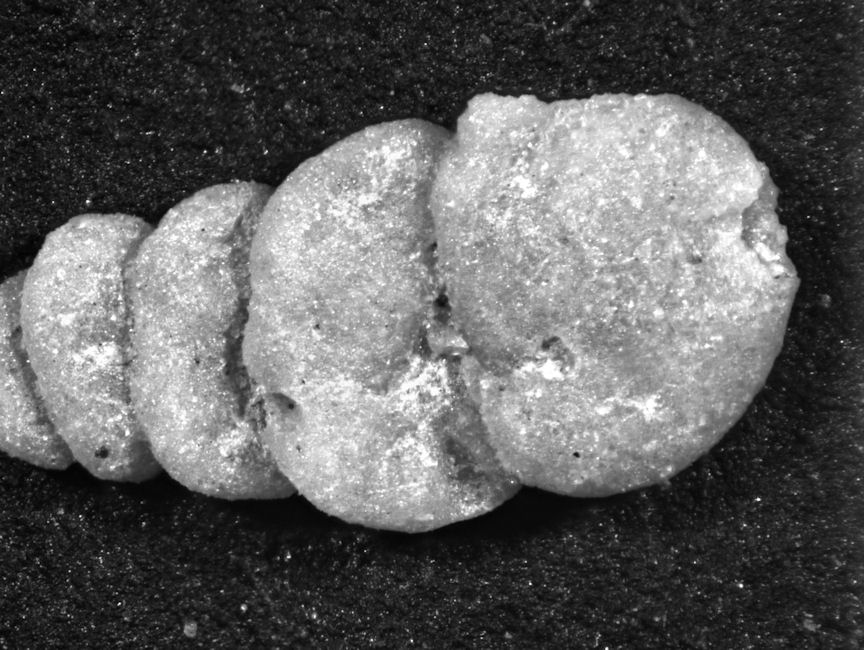 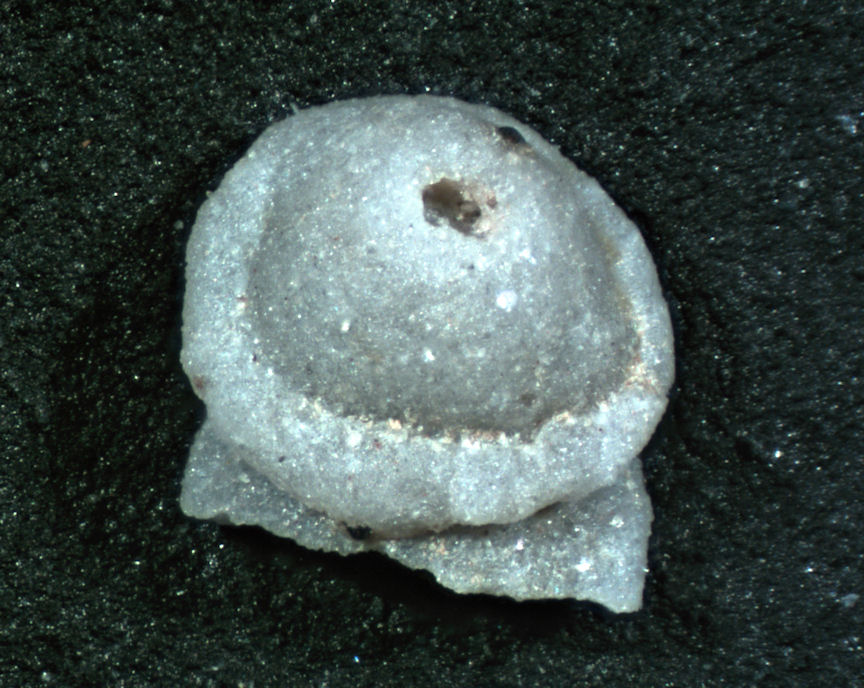 Less common is Nodosinella glennensis Harlton, 1927. This is a robust, uniserial species with a round, terminal aperture. The subglobular chambers are typically crushed at right angles to the growth axis, as seen in the image on the left. (Length of this specimen is 2.2 mm.) The image on the right shows a terminal chamber, broken off from the remainder of the test, with the terminal aperture clearly indicated. This final chamber was only partially crushed. 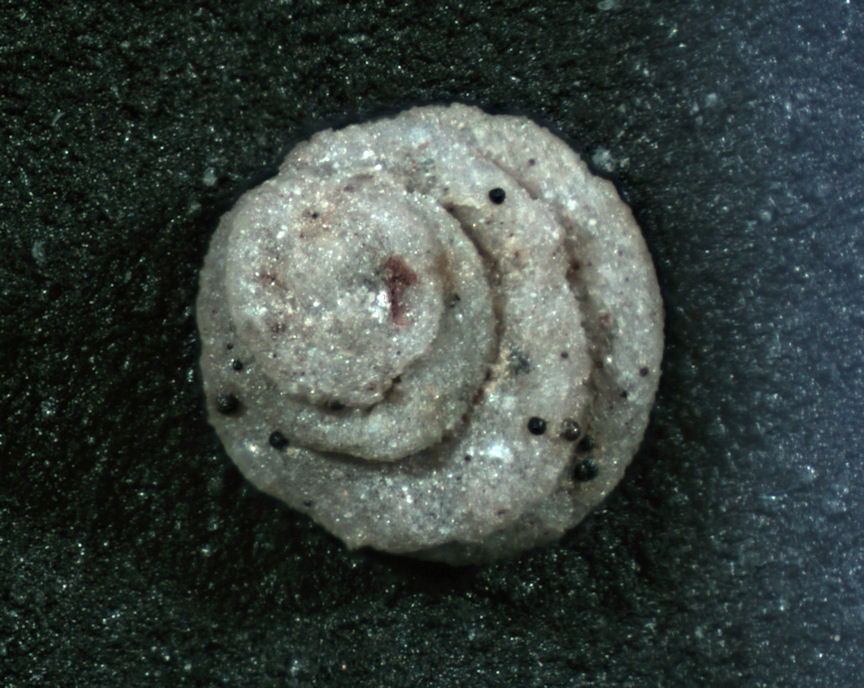 More rarely, one finds a specimen that has been crushed parallel to the axis of growth. This produces a form that looks like a stack of coins. In this image, the early chambers are on top, and the test is resting on its terminal face. (If you turn it over, the aperture is present in the center of the terminal face.) 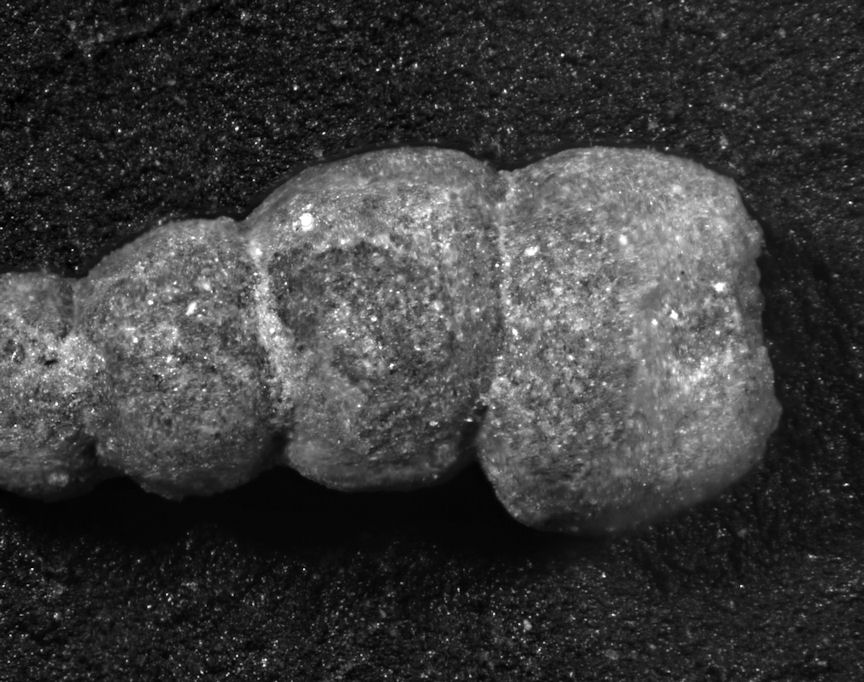 I suspect that this last image shows a specimen of the same species that has not been crushed. Chambers have been broken off of both ends, but the size and uniserial construction are correct. It looks very much like Harlton's original illustrations of the species, which was described from relatively undeformed specimens. 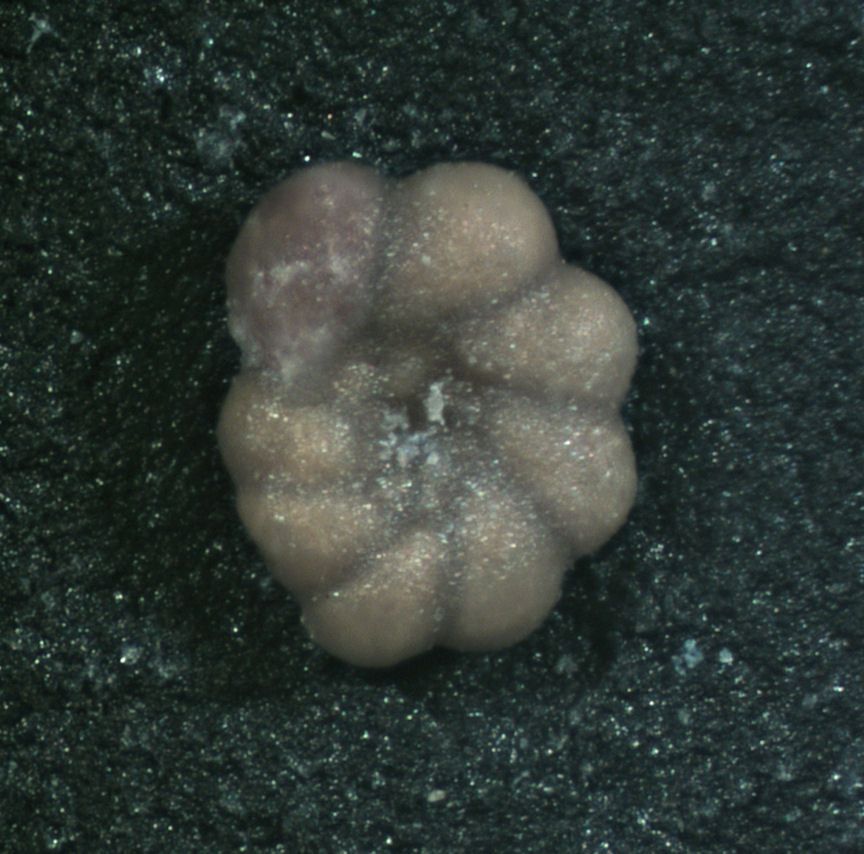 Finally, we see Endothyra whitesidei Galloway & Ryniker, 1930, a specimen that is 1.1 mm in greatest width. This specimen was unique in the sample, and looks rather different from the others. It is amber in color, and slightly shiny. The Treatise on Invertebrate Paleontology describes all members of the superfamily Endothyracea as being calcareous imperforate, with some arenaceous material in the more "primitive" forms. I see no trace of arenaceous structure in this specimen, but it is certainly imperforate.

I continue to struggle with the whole question of wall composition. If you see sand grains or sponge spicules in the wall, then the specimen is clearly agglutinated. Calcareous, hyaline walls, with their (usually) obvious perforations are also easy to recognize. What is not clear to me is the distinction between the secreted calcareous (but imperforate) type of wall, and the agglutinated wall composed of fine calcareous particles in a secreted, calcareous cement. How would they look different?