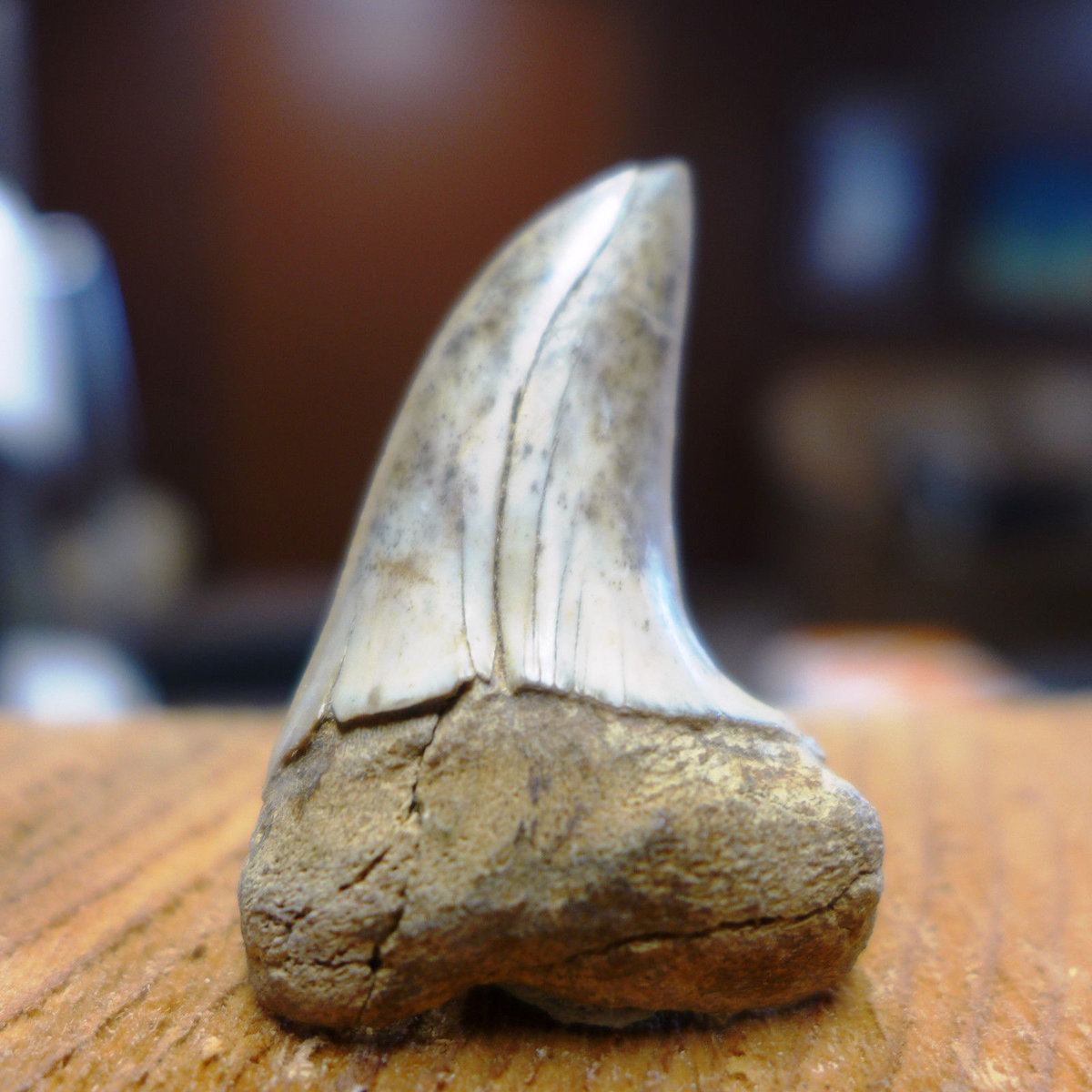 Olcese Sandstone, Bakersfield, California
Miocene Age (23.03-5.333 million years ago)
Cosmopolitodus hastalis, the broad-tooth mako or giant white shark (other common names include the extinct giant mako and broad-tooth white shark), is an extinct mackerel shark that lived from the Miocene epoch to the Pliocene epoch. Its teeth can reach lengths up to 3.5 in (7.5 cm) and are found worldwide. It is believed to be an ancestor to the great white shark, a fact supported by the transitional species Carcharodon hubbelli, and most likely would have been one of the major predators in its ecosystem; preying upon small whales and other mammals. The taxonomy of C. hastalis, especially the status of its genus, has a messy history and has long been subjected to debate. The initial scientific names was first given as Oxyrhina hastalis and Oxyrhina xiphodon for the narrow and broad-form variations respectively by Swiss naturalist Louis Agassiz in his 1843 paper Recherches sur les poissons fossiles, although some indications show that he had coined the taxon as early as 1838.[4] Throughout the early and mid 20th century, different genera and species of other lamniformes would be clumped into the two taxons as the genus Oxyrhina began to be used as a wastebasket taxon. Sharks previously identified as variations of Oxyrhina hastalis or Oxyrhina xiphodon included two species of extinct ancestral makos Isurus desori and Isurus retroflexus, the serrated mako (Carcharomodus escheri), and the false-toothed mako (Parotodus benedenii).[5] Eventually, later studies would begin to show that much of the sharks within the genus and two species are distinct from each other, discarding the genus Oxyrhina altogether and creating another issue on what new taxons the sharks should be placed in. As of now, the genus is still uncertain and debated. Shortly after the discarding of the genus Oxyrhina, a review by Holec et al. (1995) placed the species hastalis and xiphodon as a species of mako under the genus Isurus, citing the similarities between the teeth of the two and that of modern mako sharks. In 2001, a study by Ward & Bonavi (2001) considered Isurus hastalis and Isurus xiphodon as conspecific and declared the latter a nomen dubium. Although this conclusion is widely accepted, some scientists disagree, with a study by Whitenack and Gottfried (2010) demonstrating geometrically morphological differences between I. hastalis and I. xiphodon. The scientific name Isurus hastalis is considered as the "traditional view" in the debate regarding the shark's taxonomy. Ward & Bonavi (2001) reexamined the teeth of I. hastalis and noted a strong morphological similarity between it and the extant great white shark. The study concluded that I. hastalis is a direct ancestor of the great white and is more related to it than other makos. This moved the species into the genus Cosmopolitodus, which was a move that was first proposed by Glikman (1964) but was long rejected beforehand. Later discoveries supports Ward & Bonavi's conclusion of its ancestry to the great white. Cione et al. (2011) noted a possibility of moving all species in the genus Cosmopolitodus into the genus Carcharodon to avoid a possible paraphyly that would occur if C. xiphodon is a putative sister species of Carcharodon. An analysis of a newly discovered Carcharodon hubbelli by Ehret et al. (2012) further cemented the theory of C. hastalis ancestry to the great white and supported Coine et al. (2011)'s proposal of moving Cosmopolitodus into the genus Carcharodon, remarking that the two genera were separated solely due to the lack of serrations by C. hastalis and the lack of lateral cusplets by C. carcharias and pointing out examples of Late Miocene C. hastalis teeth showing basal serrations. However, the genus Cosmopolitodus continues to be used by most scientists. C. hastalis teeth can grow up to 3.5 inches in length, suggesting a very large shark. Their bodies are probably very similar to that of modern great whites, or a transition between them and ancient makos. They are also believed to have a cosmopolitan distribution, with teeth being found worldwide.
Kingdom: Animalia
Phylum: Chordata
Class: Chondrichthyes
Subclass: Elasmobranchii
Superorder: Selachimorpha
Order: Lamniformes
Family: Lamnidae
Genus: †Cosmopolitodus (Glikman, 1964)
Species: †hastalis