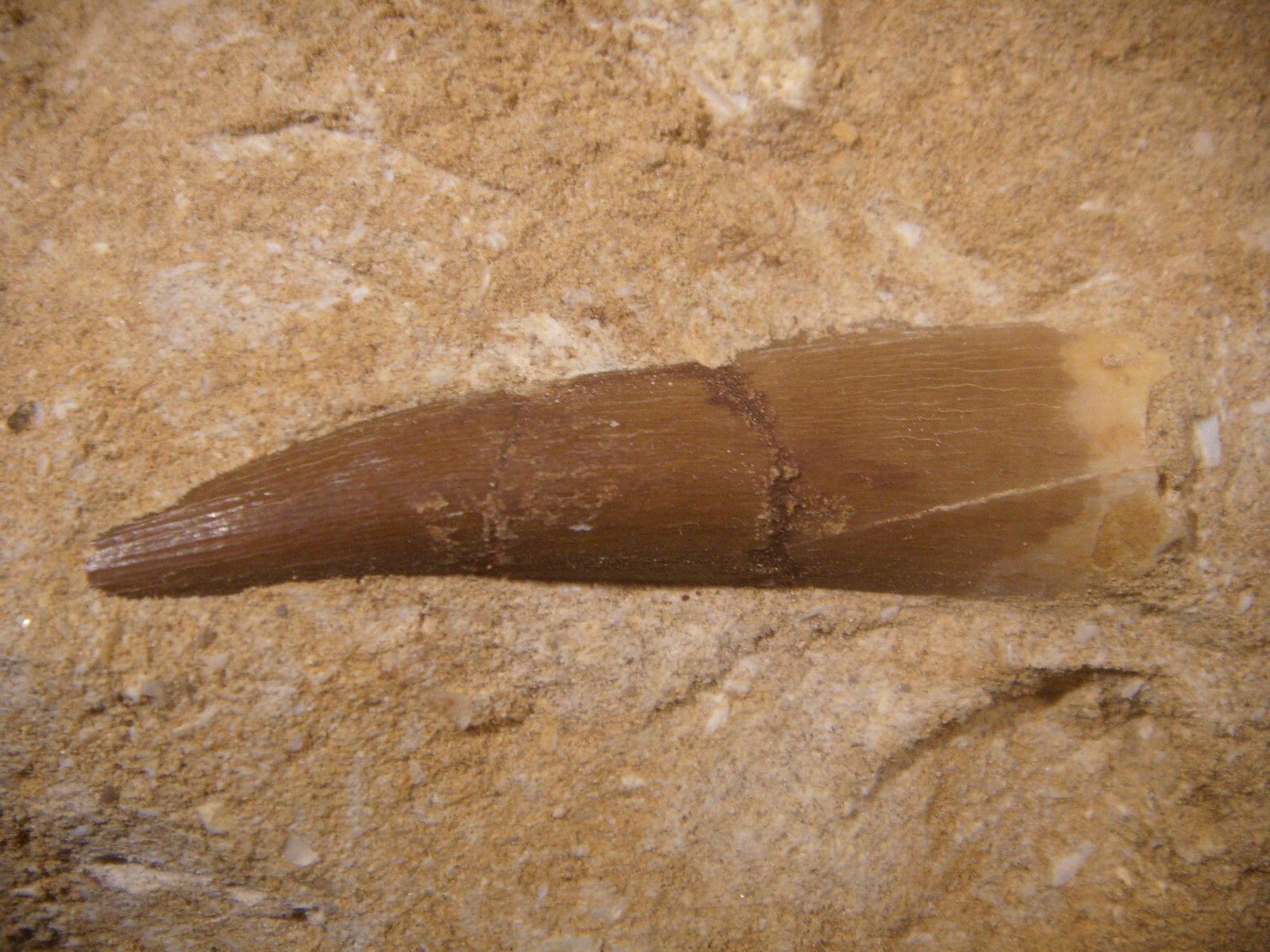 Share Followers 0
Plesiosaur Tooth in Matrix
SITE LOCATION: Genntour Basin Phosphate Deposits in Khouribga, Morocco
TIME PERIOD: Cretaceous Period (80.5 -66 million years ago)
Data: The Plesiosauria ( plesios, meaning "near to" and Sauria) or plesiosaurs are an order or clade of Mesozoic marine reptiles (marine Sauropsida), belonging to the Sauropterygia. Plesiosaurs first appeared in the latest Triassic Period, possibly in the Rhaetian stage.They became especially common during the Jurassic Period, thriving until their disappearance due to the Cretaceous–Paleogene extinction event at the end of the Cretaceous Period. They had a worldwide oceanic distribution. Plesiosaurs were among the first fossil reptiles discovered. In the beginning of the nineteenth century, scientists realised how distinctive their build was and they were named as a separate order in 1835. The first plesiosaurian genus, the eponymous Plesiosaurus, was named in 1821. Since then, more than a hundred valid species have been described. In the early twenty-first century, the number of discoveries has increased, leading to an improved understanding of their anatomy, relationships and way of life. Plesiosaurs had a broad flat body and a short tail. Their limbs had evolved into four long flippers, which were powered by strong muscles attached to wide bony plates formed by the shoulder girdle and the pelvis. The flippers made a flying movement through the water. Plesiosaurs breathed air, and bore live young; there are indications that they were warm-blooded. Plesiosaurs showed two main morphological types. Some species, with the "plesiosauromorph" build, had (sometimes extremely) long necks and small heads; these were relatively slow and caught small sea animals. Other species, some of them reaching a length of up to seventeen metres, had the "pliosauromorph" build with a short neck and a large head; these were apex predators, fast hunters of large prey. The two types are related to the traditional strict division of the Plesiosauria into two suborders, the long-necked Plesiosauroidea and the short-neck Pliosauroidea. Modern research, however, indicates that several "long-necked" groups might have had some short-necked members or vice versa. Therefore the purely descriptive terms "plesiosauromorph" and "pliosauromorph" have been introduced, which do not imply a direct relationship. "Plesiosauroidea" and "Pliosauroidea" today have a more limited meaning. The term "plesiosaur" is properly used to refer to the Plesiosauria as a whole, but informally it is sometimes meant to indicate only the long-necked forms, the old Plesiosauroidea.
Kingdom: Animalia
Phylum: Chordata
Class: Reptilia
Order: †Plesiosauria
Family: †Plesiosauridae
Genus: †Plesiosaurus
From the album: