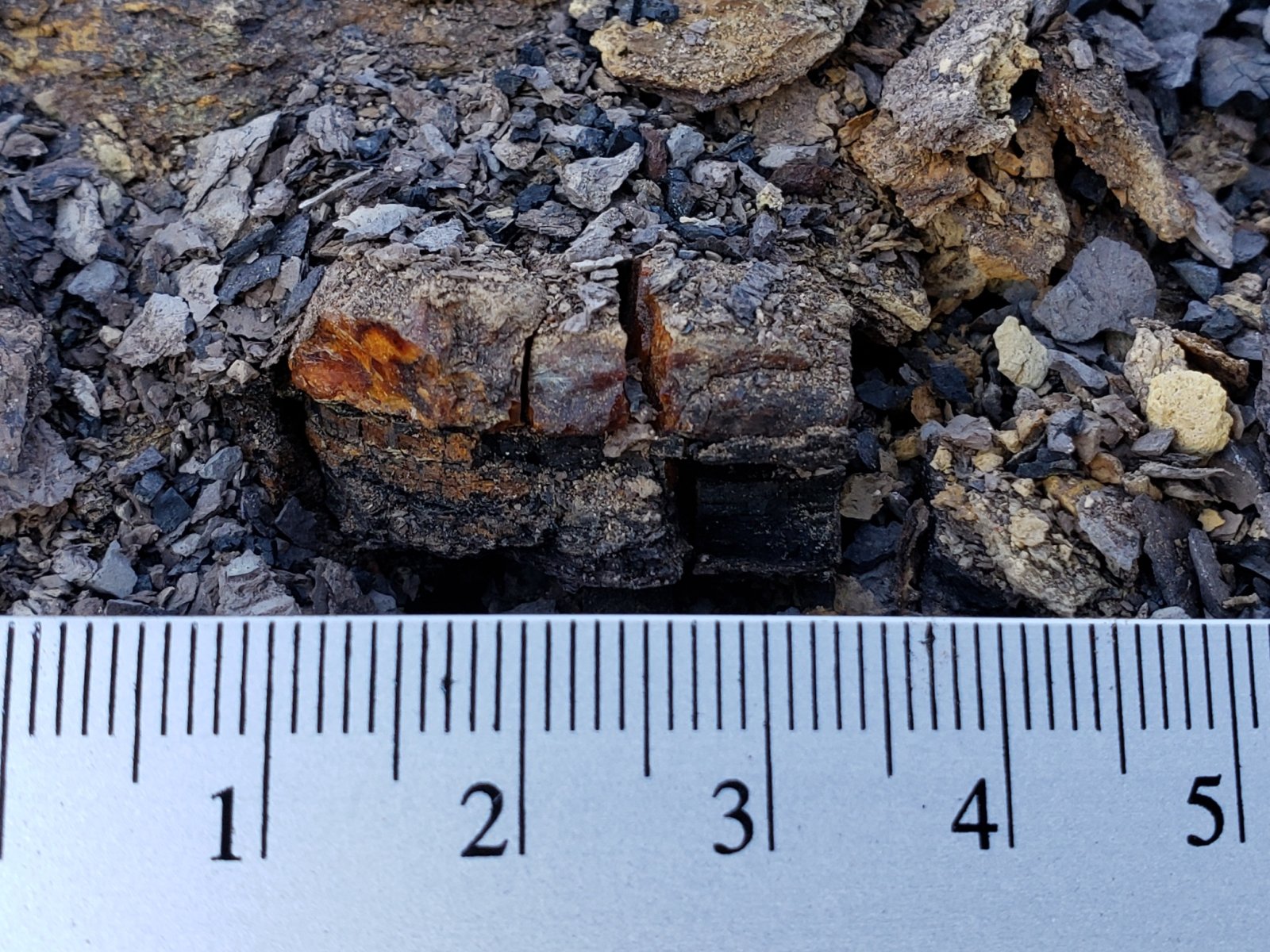 Deposit:
*While amber is found throughout the Hanna Basin, only one site is known to yield large pieces of clear, stable amber: the locality known as "Glory Hole" is located within the north-central section of the Hanna Basin, in south-central Wyoming; exposures are positioned about 8,500 ft. above the base of the Hanna Fm., and at an elevation of roughly 8,900 ft. above sea level. Extensive layers of lignite and carbonaceous (lignitic) mudstone host abundant plant fossils and amber; the matrix is fissile (easily separated into thin layers) and friable (crumbly). Physical weathering (freeze-thaw, wind erosion, thermal expansion, etc.) of the exposures has created an expansive area of disintegrated substrate. This particular site was once a watery paleoenvironment, characterized by shallow swamps. At the very top of the bluff are layers of fissile, light-colored shale referred to as the "Upper Lacustrine Unit" of the Hanna Fm.

Amber:
*Occurring as small droplets, runs, and globular masses, much of the amber is transparent and of a reddish-orange color throughout, with some containing plentiful internal fractures. The intact, non-fractured amber is very hard, measuring 2.5-3.0 on the Mohs scale, being generally harder than Dominican and Chiapas ambers. It is very fragile and fractures easily, but takes a high, glassy polish like Myanmar amber. Through PyGC-MS, the amber is shown to come from a cupressaceous source tree, and is extremely similar chemically to cretaceous amber from the Raritan Fm. in New Jersey. Of several hundreds of pieces collected by some of the authors, et al., of the cited publication, prepared, and studied at the American Museum of Natural History, only one contained a single insect inclusion: a wingless thrips (1.1mm) that was heavily-compressed and deformed due to geologic forces.

From my time at the site, I observed that much of the in-situ amber, especially large pieces, was concentrated within a short horizon only a couple feet in depth. It was especially common near buried, coalified remains of branches and logs, and matrix layers containing numerous leaf remains (mostly cupressaceous). Additionally, I've noticed that some of this material is fairly phosphorescent when exposed to longwave UV light.

Minerals and Fossils:
While collecting at the site, I noticed several other interesting features besides the amber I sought: carbonized leaves were present in some of the separated matrix layers, petrified wood was present in-situ and eroded from the matrix, and transparent gypsum crystals (some being relatively large) were commonly exposed along the site's surface.

Also found in-situ were coalified twigs, branches, logs, and even stumps; I had partially uncovered a few such logs in my shallow excavations (6-12" deep) for amber. I observed a few stumps (~15" diameter) still preserved in an upright position, perpendicular to the matrix layers, with the majority of the lignitic remains buried beneath the surface. Recovered from coarse-grained sandstone originating from above the lignite deposits, was a partial angiosperm leaf imprint with distinct veins.

*Throughout the Hanna Basin, amber is found in various quantities, physical conditions, sizes, and ages: the age range of the ambers' host strata sequence ranges from Late Cretaceous to Late Paleocene (76-56 Ma), an unprecedented range among all the world's known amber deposits. A stratigraphic interval more than 5 miles thick separates the highest and lowest occurrences of amber within the Hanna Basin. Paleocene amber is very rare, with only a handful of significant deposits in the world, notably from the Paris Basin and 5 localities in Switzerland.